A team of Burke Museum and University of Washington paleontologists excavated four dinosaurs in northeastern Montana this summer. All fossils will be brought back to the Burke Museum where the public can watch paleontologists remove the surrounding rock in the visible fossil prep lab. 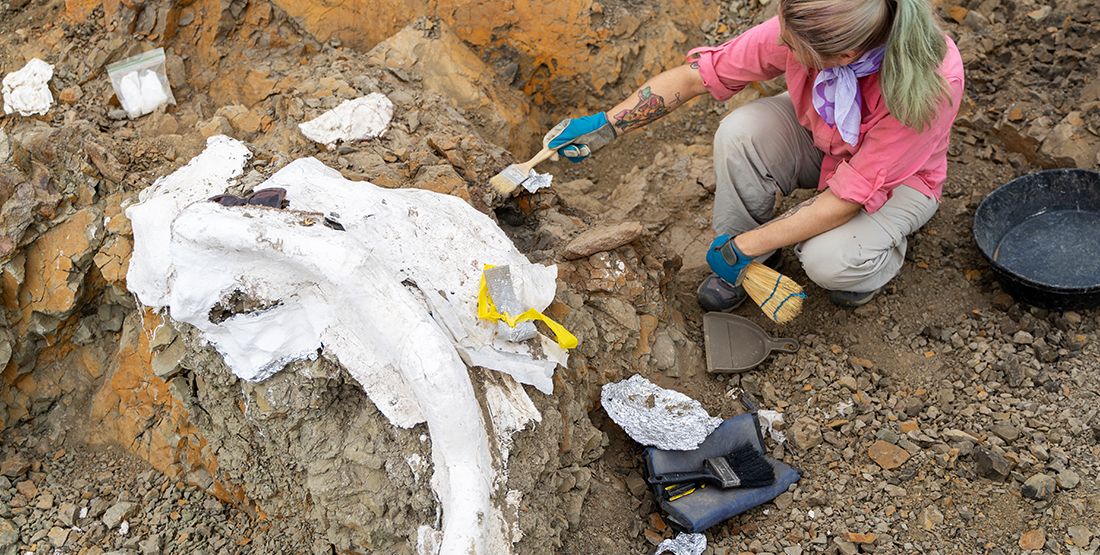 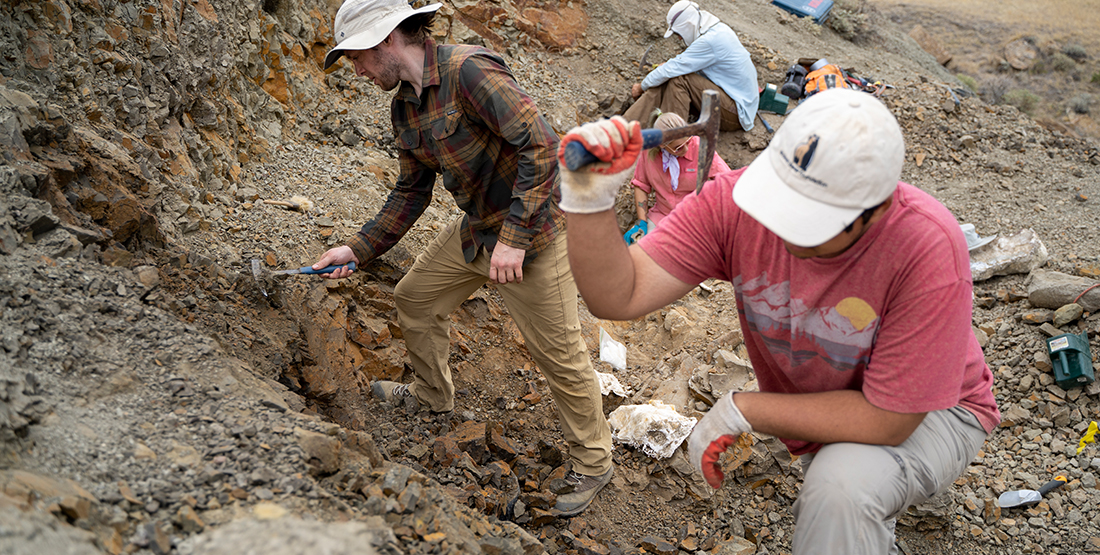 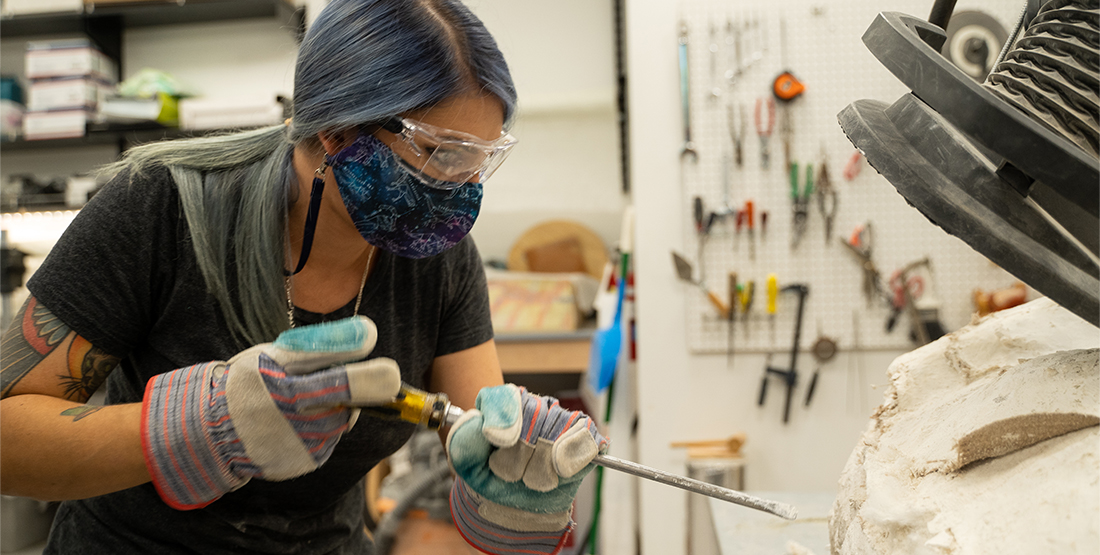 The four dinosaur fossils include: the ilium (hip) bones of an ostrich-sized theropod (meat-eating, two-legged dinosaurs that includes T. rex and raptors); the hips and legs of a duck-billed dinosaur; pelvis, toe claw, and limbs from another theropod that could be a rare ostrich-mimic Anzu or possibly a new species; and the remarkable discovery of a Triceratops skull and other fossilized bones. Three of the four dinosaurs were all found in close proximity on Bureau of Land Management land that is currently leased to a rancher.

In July 2021, a team of volunteers, paleontology staff, K-12 educators as part of the DIG Field School program, and students from both UW and other universities worked together to excavate these dinosaurs. The fossils were found in the Hell Creek Formation, a geologic formation that dates from the latest Cretaceous (68 to 66 million years ago). Typical paleontological digs involve excavating one known fossil. However, the Hell Creek Project is an ongoing research collaboration of paleontologists from around the world studying life right before, during, and after the K-Pg mass extinction event that killed off all dinosaurs except birds. The Hell Creek Project is unique in that it is unbiased sampling of all plant and animal life found throughout the rock formation. 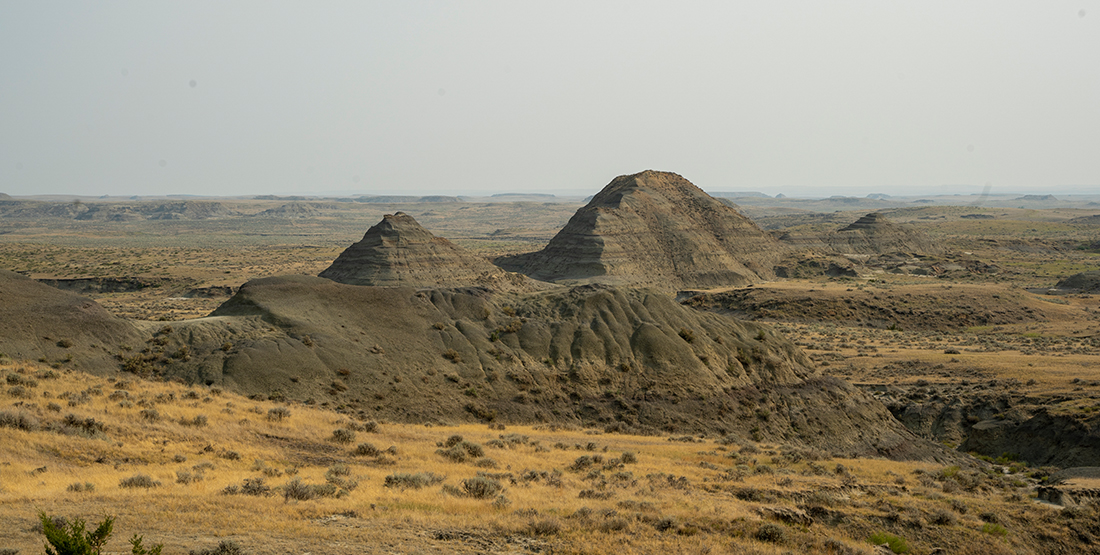 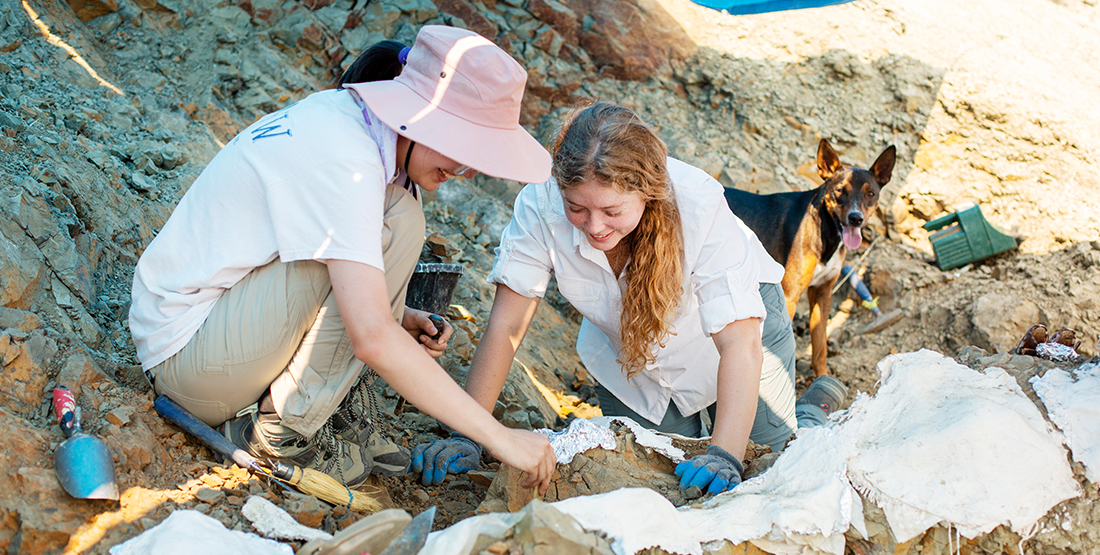 “Each fossil that we collect helps us sharpen our views of the last dinosaur-dominated ecosystems and the first mammal-dominated ecosystems,” Burke Museum Curator of Vertebrate Paleontology and UW Biology Professor Dr. Gregory Wilson Mantilla said. “With these, we can better understand the processes involved in the loss and origination of biodiversity and the fragility, collapse, and assembly of ecosystems.”

All of the dinosaurs except the Triceratops will be prepared in the fossil prep lab this fall and winter. The Triceratops fossil remains on the site because the dig team continued to find more and more bones while excavating and needs an additional field season to excavate any further bones that may be connected to the surrounding rock. The team plans to finish excavation in the summer of 2022. 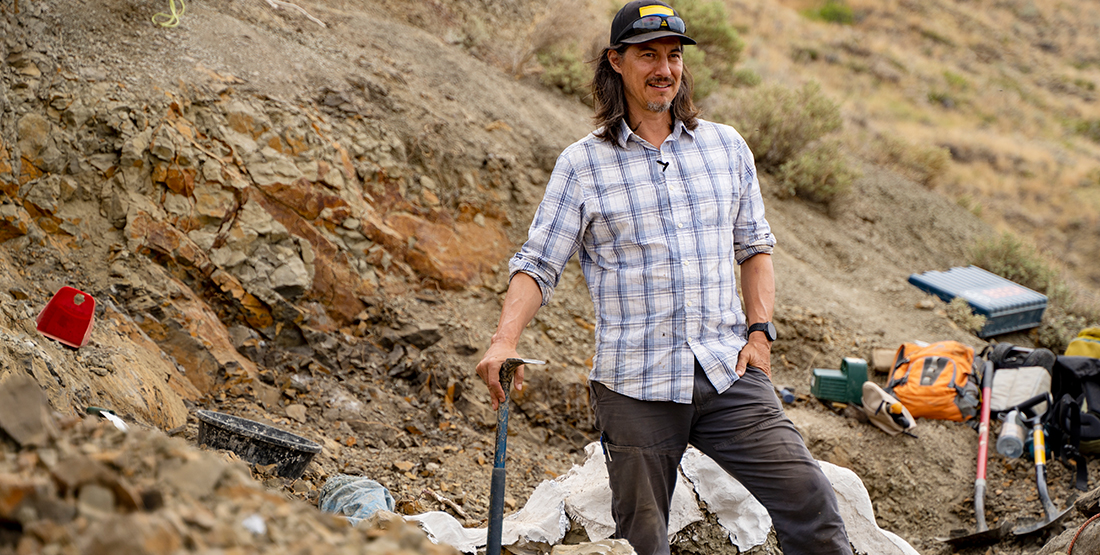 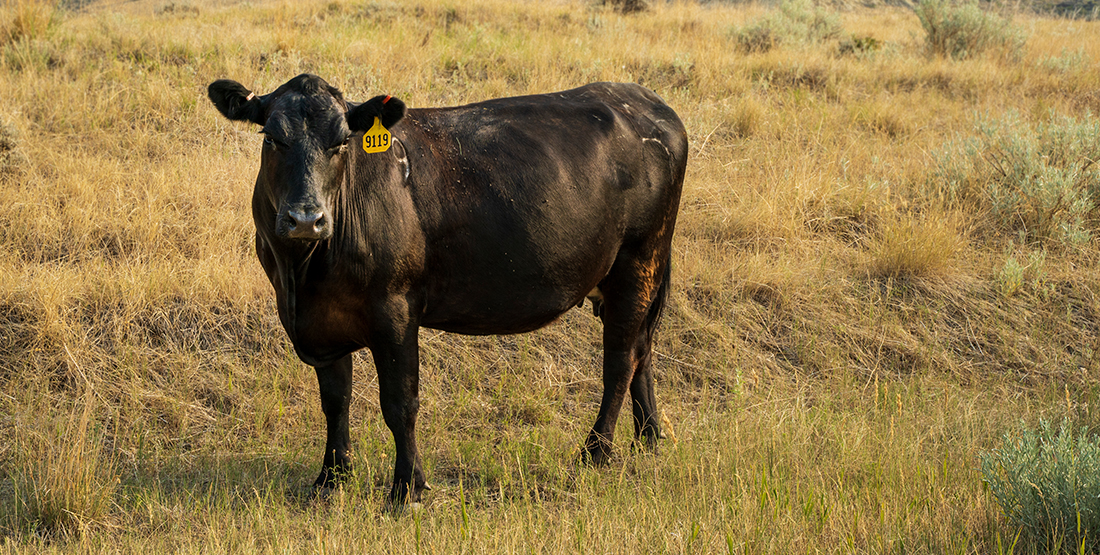 Triceratops are dubbed the “cows of the Cretaceous” given their prevalence in the fossil record.

Called the “Flyby Trike” in honor of the rancher who first identified the dinosaur while he was flying his airplane over his ranch, the team has uncovered the frill, horn bones, individual rib bones, lower jaw, teeth, and the occipital condyle bone nicknamed the “trailer hitch”—the ball on the back of the skull that connects to the neck vertebrae. The team estimates approximately 30% of the skull bones have been found to-date, with more potential bones to be excavated next year.

The Flyby Trike was found in hardened mud, with the bones scattered on top of each other in ways that are different from the way the bones would be laid out in a living animal. These clues indicate the dinosaur likely died on a flood plain and then got mixed together after its death by being moved around by a flood or river system, or possibly moved around by a scavenger like a T. rex, before fossilizing. In addition, the Flyby Trike is one of the last Triceratops living before the K-Pg mass extinction event. Burke paleontologists estimate it lived less than 300,000 years before the mass extinction event.

“Previous to this year's excavations, a portion of the Flyby Trike frill and a brow horn were collected and subsequently prepared by volunteer preparators in the fossil preparation lab. The frill was collected in many pieces and puzzled together fantastically by volunteers. Upon puzzling the frill portion together, it was discovered that the specimen is likely an older ‘grandparent’ Triceratops,” Burke Museum Paleontology Prep Lab Manager Kelsie Abrams—who also participated in this summer’s field work—said. “The triangular bones along the frill, called ‘epi occipitals,’ are completely fused and almost unrecognizable on the specimen, as compared to the sharp, noticeable triangular shape seen in younger individuals. In addition, the brow horn curves downwards as opposed to upwards, and this feature has been reported to be seen in older animals as well.” 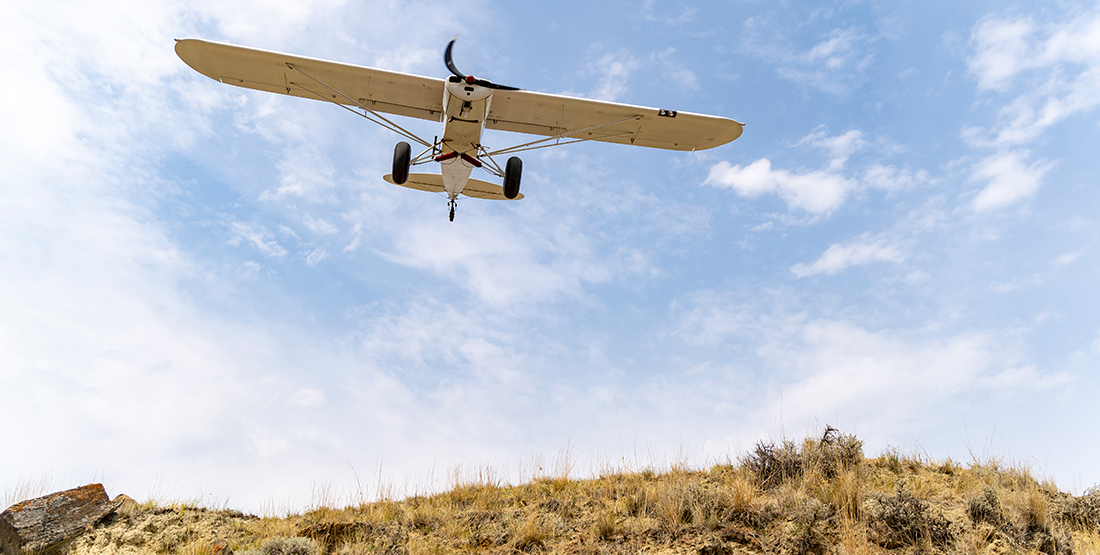 The plane used to discover the Flyby Trike flies over the site. 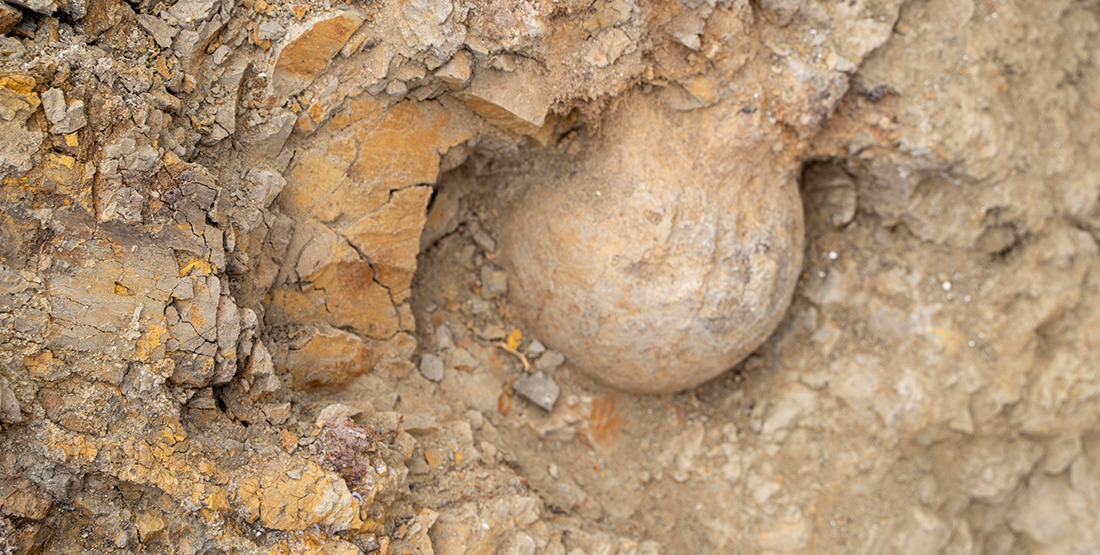 A closeup of the Flyby Trike’s occipital condyle bone nicknamed the “trailer hitch”—the ball on the back of the skull that connects to the neck vertebrae.

Amber and seed pods were also found with the Flyby Trike. These finds allow paleobotanists to determine what plants were living alongside Triceratops, what they may have been eating, and what the overall ecosystem was like in Hell Creek leading up to the mass extinction event.

“Plant fossil remains from this time period are crucial for our understanding of the wider ecosystem. Not only can plant material tell us what these dinosaurs were perhaps eating, but plants can more broadly tell us what their environment looked like,” UW Earth and Space Sciences and Burke Museum Graduate Student Paige Wilson said. “Plants are the base of the food chain and a crucial part of the fossil record. It’s exciting to see this new material found so close to vertebrate fossils!”

Visitors can now see paleontologists remove rock from the first of the four dinosaurs—the theropod hips—in the Burke’s paleontology prep lab. Additional fossils will be prepared in the upcoming weeks. All four dinosaurs will be held in trust for the public on behalf of the Bureau of Land Management and become a part of the Burke Museum’s collections. 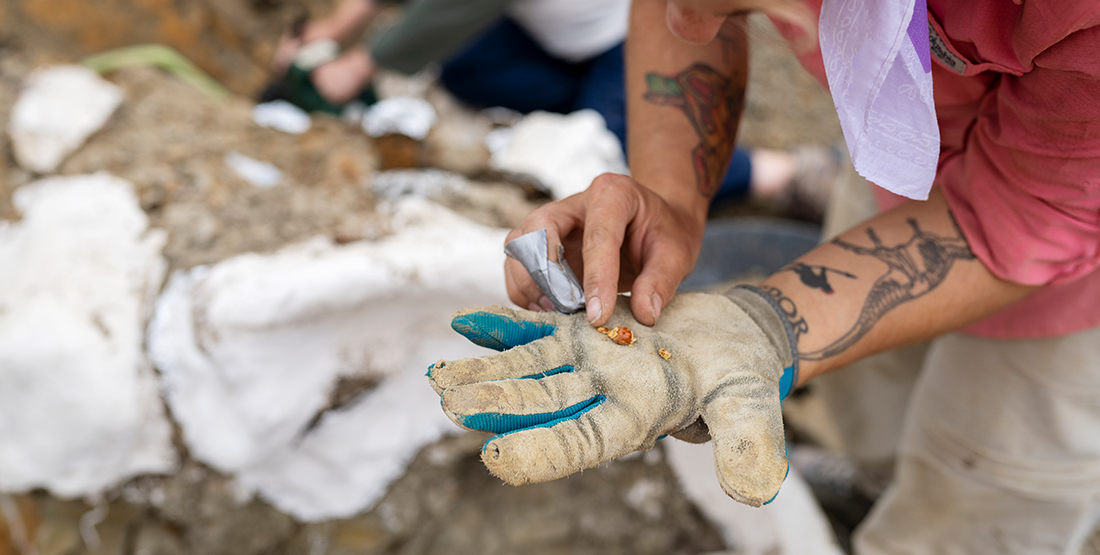 Amber and fossilized seed pods were also found at the Flyby Trike site.

Also enjoy paleontology-themed activities throughout the month of October as part of National Fossil Month! Follow a fossil’s journey throughout the museum with a special Husky Scavenger Hunt, play with magnetic walls depicting paleontology sites, and do at-home dino crafts available at burkemuseum.org/burkefromhome.