A team of Burke Museum paleontologists discovered a Tyrannosaurus rex! So far about 20% of a full skeleton has been excavated, including a very complete skull plus teeth, ribs, vertebrae, hips, and lower jaw bones. There’s likely more to discover! 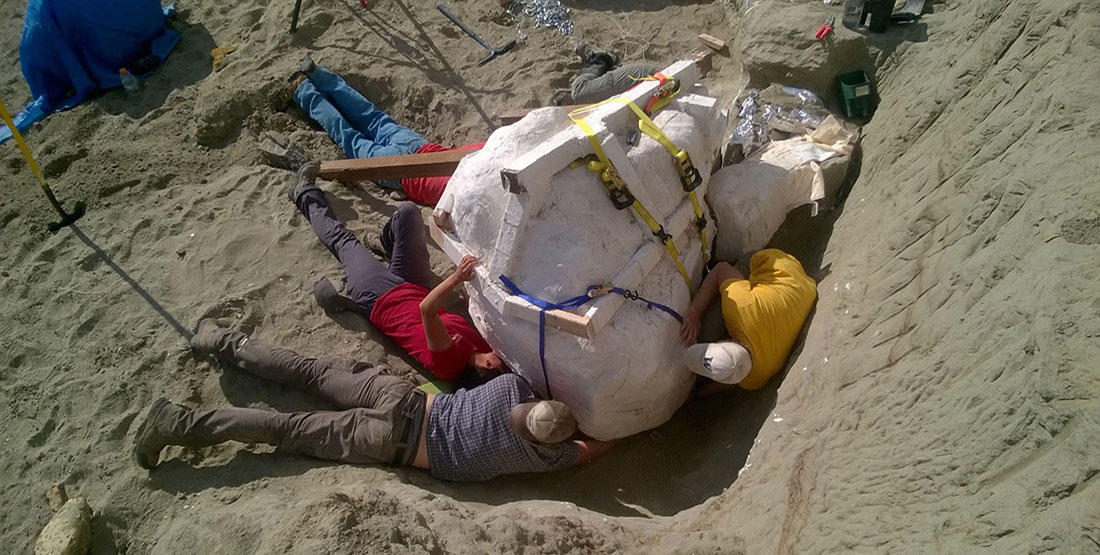 The 66.3-million-year-old T. rex was discovered in the Hell Creek Formation in northern Montana—an area that is world-famous for its fossil dinosaur sites. With permits to research and collect on federal land, the team of more than 45 people, led by Burke Museum Adjunct Curator of Vertebrate Paleontology and University of Washington associate biology professor Dr. Greg Wilson, helped excavate the T. rex over the course of a month this summer.

“When we started to see those teeth with the skull, we knew we had a fantastic specimen,” said Wilson. Not only is it a fantastic specimen, it is incredibly rare. Although arguably the most iconic and well-known species of dinosaur, the T. rex skull is one of only about 15 reasonably complete ones known to exist in the world.

Here’s how the discovery unfolded…

A clue on the surface

Two Burke Museum paleontology volunteers, Jason Love and Luke Tufts, were looking for signs of fossils on federal land managed by the Bureau of Land Management (BLM) in the Hell Creek Formation when they stumbled upon a large scattering of bone fragments on the surface of the sandstone.

Upon further inspection, they noticed large fossilized vertebrae sticking out of the rock. The large size of the bones along with their honeycomb-like internal appearance indicated that they belonged to a carnivorous dinosaur.

“At this point, we knew it was a dinosaur because of the size—there were no other vertebrates on the land that were this size,” said Wilson. They suspected it might be a T. rex but couldn’t yet be sure… 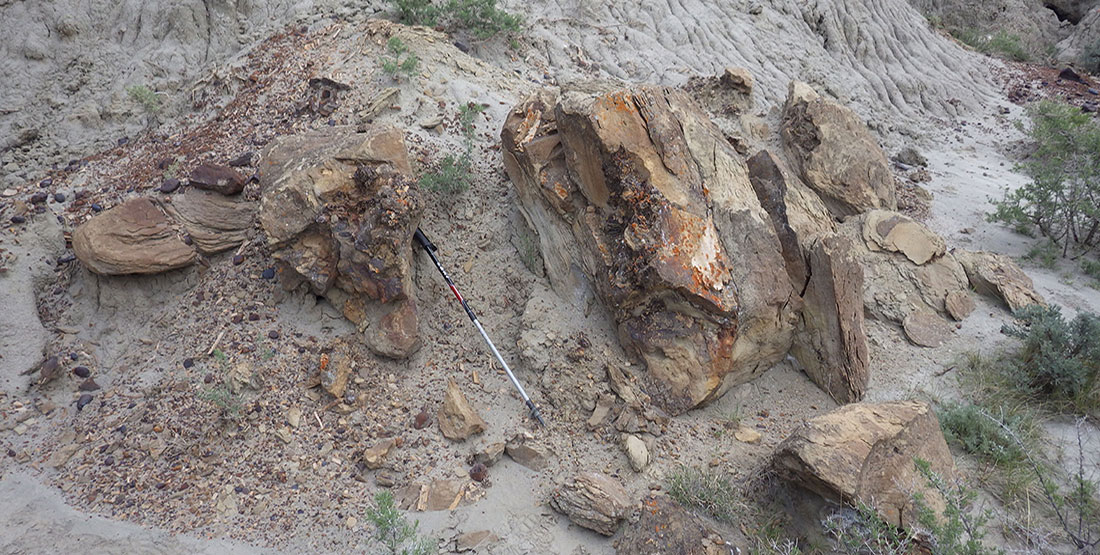 Burke Museum paleontologists identified bone shards characteristic of a T. rex on the surface of a hill in the Hell Creek Formation in northern Montana. 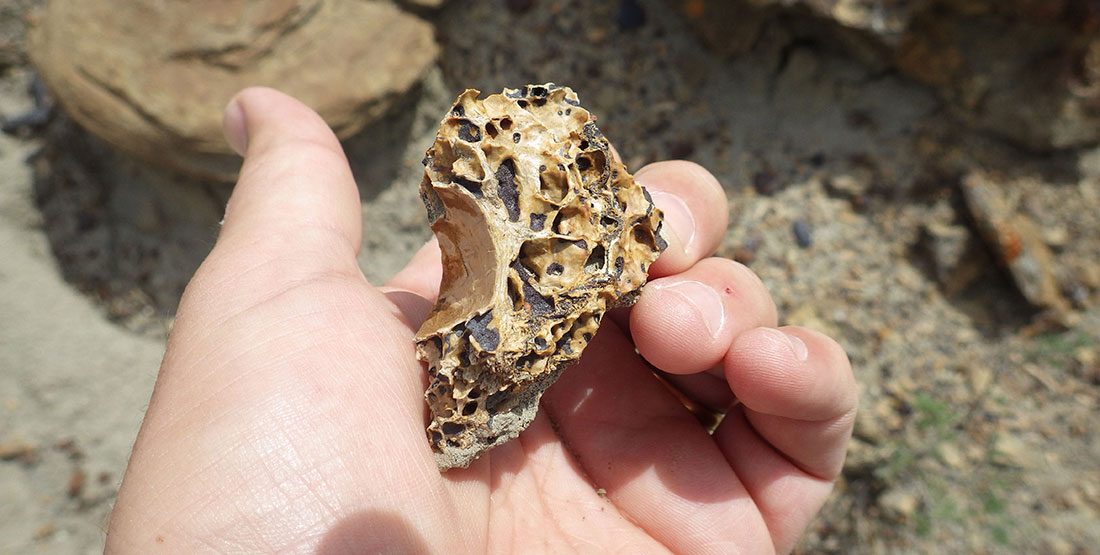 Dinosaur bone discovered on the surface of a hill in the Hell Creek Formation in northern Montana. The bone's honeycomb-like appearance is characteristic of a T. rex.

The team of Burke paleontologists and volunteers got to work preparing to excavate the fossils after aquiring permits from the BLM. They were in the area collecting fossils as part of the Hell Creek Project, a multi-disciplinary project examining vertebrates, invertebrates, plants and the geology of the area to learn more about the period of time immediately before and after the mass-extinction event that killed off the dinosaurs and gave rise to the age of mammals.

First the team, led by field crew chief and postdoctoral researcher Dave DeMar, needed to remove about 20 tons of rock from the hillside—a section nearly 16 feet in width—so they could create a ledge at the level of the fossils. This grueling task took a team of eight to ten people nearly two weeks of continuous digging with jackhammers, axes and shovels. 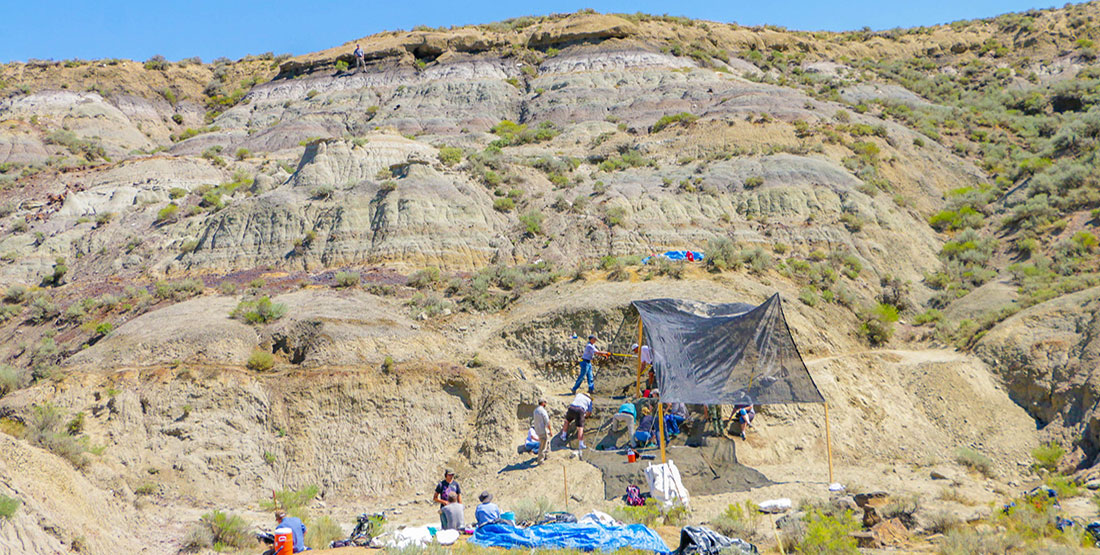 The excavation site in northern Montana where Burke Museum paleontologists discovered a T. rex skull and other bones.

Once the ledge was in place, they switched to smaller hand tools to carefully remove rock and dirt away from the ribs, uncovering nearby vertebrae and pelvic bones in the process. 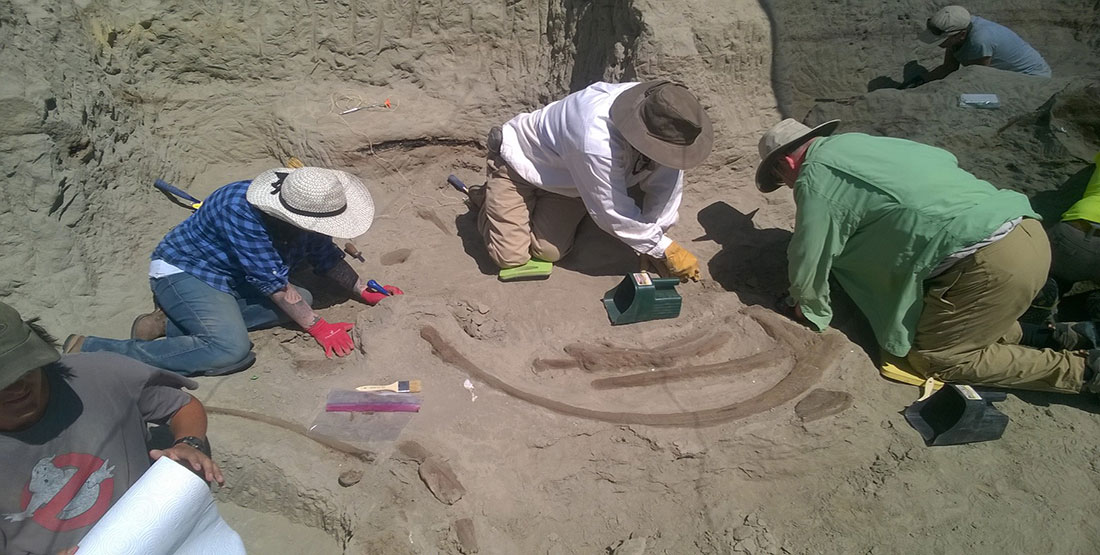 Several feet away from the ribs, the team came across an incredible find—a skull! As they chipped away the surrounding sandstone, they could see fossilized bone emerging with a keyhole-shaped opening, that was unmistakably the back (squamosal bone) of a T. rex skull.

That’s when all of the pieces fell into place (so to speak). The team had indeed discovered a T. rex!

“The combination of the skull features, the size of the bones, and the honeycomb-like appearance of the bones tell us this is a T. rex,” said Wilson. “This was a very exciting moment for us.” 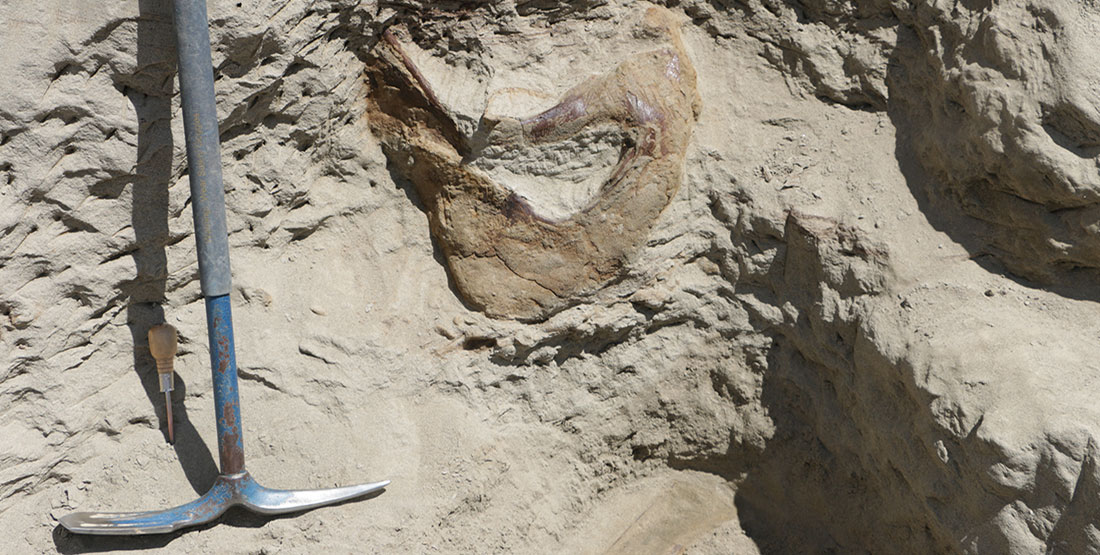 The back (squamosal bone) of a T. rex skull discovered by Burke Museum paleontologists in Montana.

Several members of the team visited the nearby Fort Peck Interpretive Center to compare the skull they had found to existing T. rex museum specimens. Sure enough, the keyhole-shaped opening peeking through the rock was an anatomical match to other T. rex fossils on display at the Center. 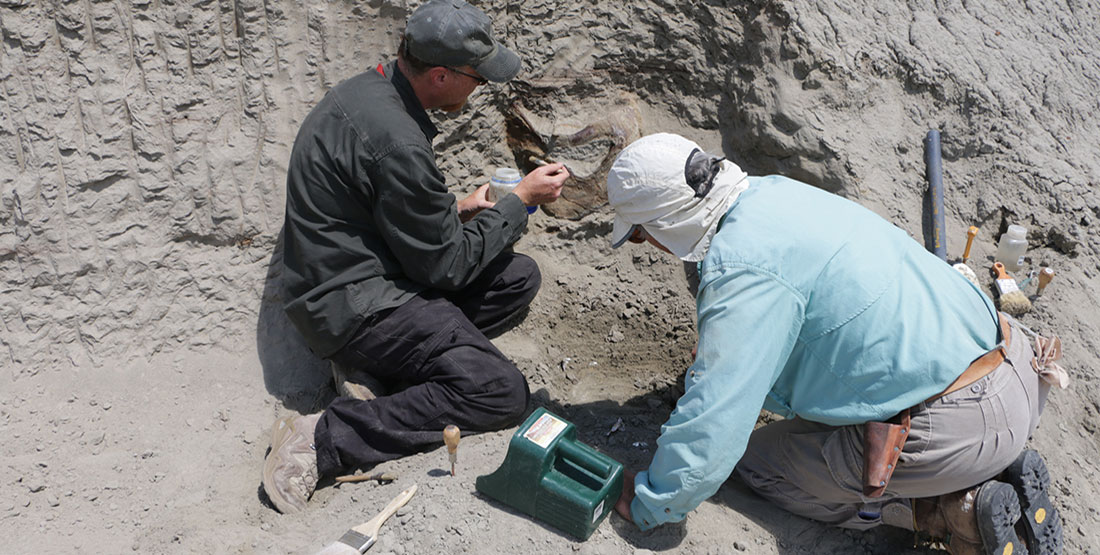 Burke Museum paleontologists Dave DeMar and Bruce Crowley paint a glue on the T. rex skull to protect and strengthen it. 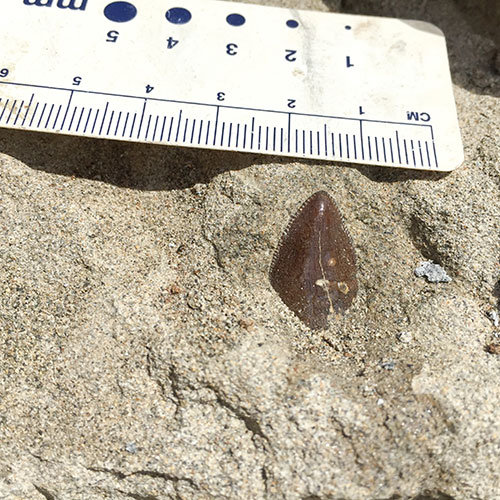 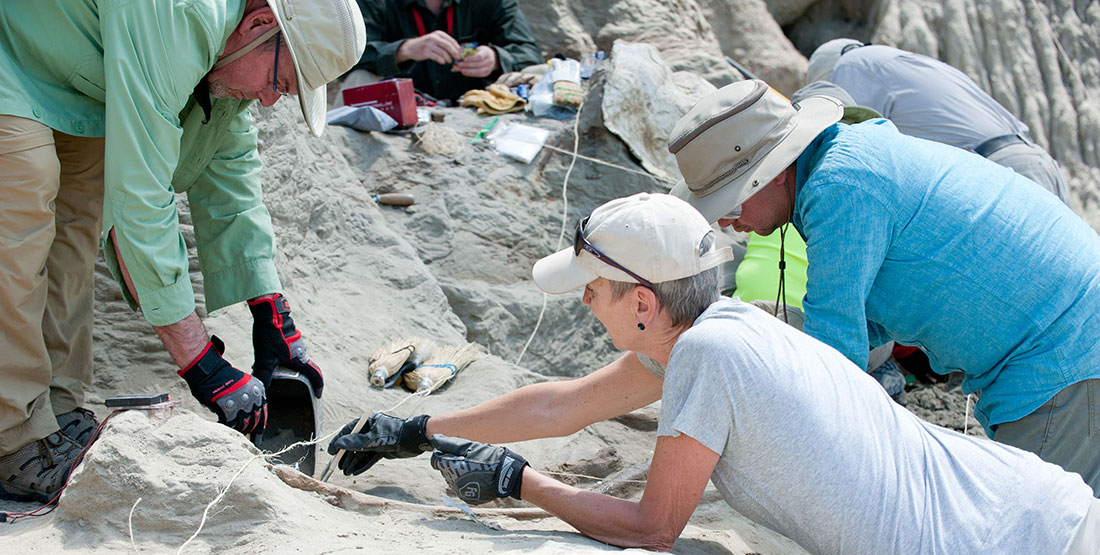 The skull excavation continued, revealing that the entire right side was intact from base to snout, including teeth.

Wilson and his team believe the other side of the skull is likely present. “There’s a very good chance that the other half of the skull is there,” said Wilson, “but the more we expose [of the skull out in the field], the greater the risk of damage.”

They’re waiting to carefully remove the rock surrounding the fossil back at the Burke Museum before they can determine its completeness. Already, this is one of only 15 reasonably complete skulls in the world.

With the one side of the skull exposed, the team found it measured more than four feet in length and just under three feet in width.Based on the size of its skull, Burke paleontologists estimate this dinosaur is about 85% the size of the largest T. rex found to-date. At the hips, the T. rex stood 15- to 20-feet-tall and was as long as a city bus from tail to head, more than 40 feet in length! 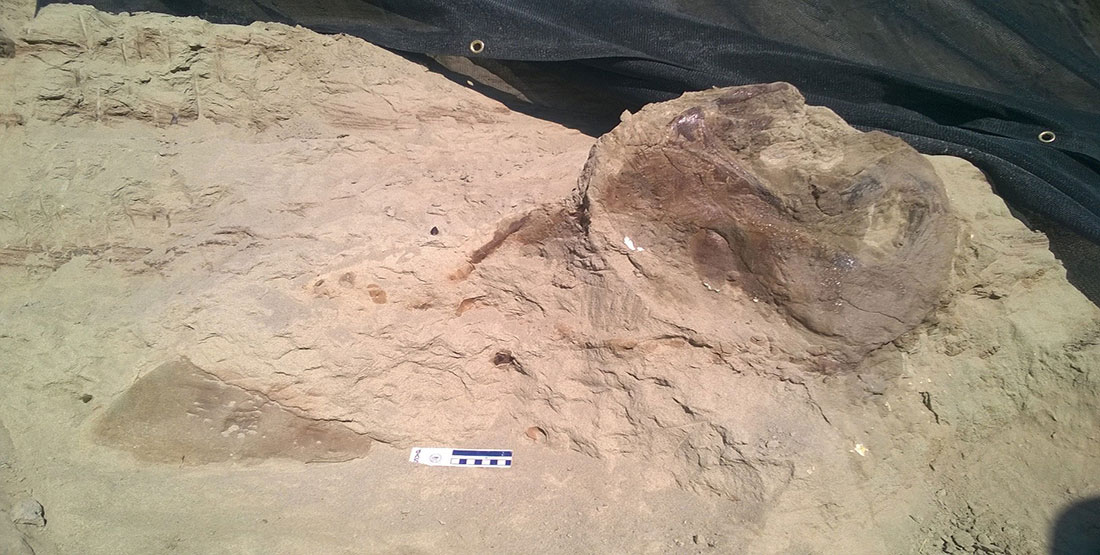 The skull of a T. rex discovered by Burke Museum paleontologists. The skull is preserved upside-down in the rock—a black tooth from the upper jaw can be seen protruding from the rock in the center of the photo.

Once the skull was almost entirely removed from the hillside, the team began the process of creating its plaster “field jacket”—similar to a cast used to cover a broken bone—to protect it during transportation to the Burke Museum.

To create the jacket, the team first covers the fossil with aluminum foil before adding numerous layers of burlap strips dipped in plaster to create a hard protective shell. For particularly large fossils like the skull, they often need to integrate multiple wooden braces to give additional support. This process is extremely important to get right to fully protect the fossil and prevent cracks from forming. 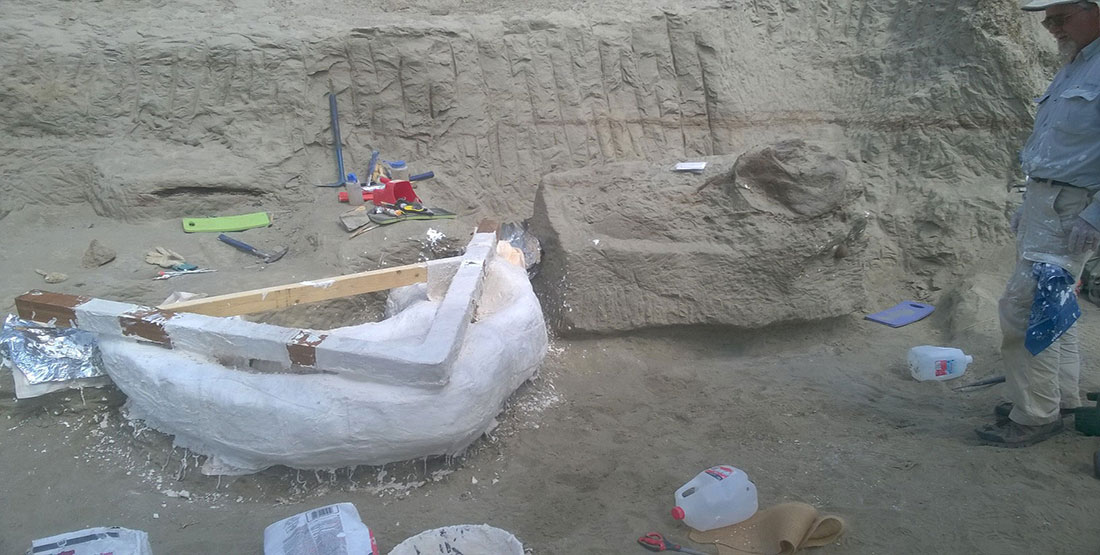 After the top and sides of the plaster jacket were dry, the team carefully rolled the specimen over to repeat the jacketing process on the other side. Rolling a fossil this large is no easy task—it requires lots of careful planning and plenty of people on hand to prevent damage. Thankfully the process went perfectly and the team fully encased the fossil in one more layer of plaster. Paleontologists dig under the T. rex skull to loosen it from the surrounding rock, before the jacket is flipped. 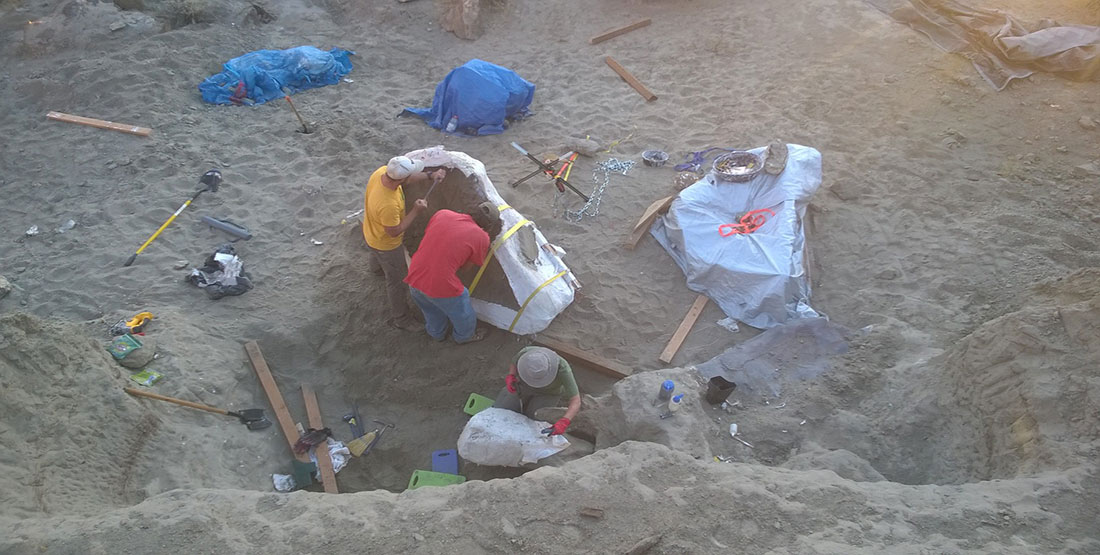 Fossil on the move

The next challenge was moving the massive fossil to the truck so it could be driven to its new home at the Burke Museum.

The team estimates the skull and its plaster jacket weigh a staggering 3,000 pounds! It is so heavy that a neighboring rancher’s hay baler (with a 2,000-pound load maximum) couldn’t lift it. Thankfully, the rancher had a heavy-duty tractor that was able to handle the weight and safely lifted the skull to the truck as members of the crew used straps to steady it. 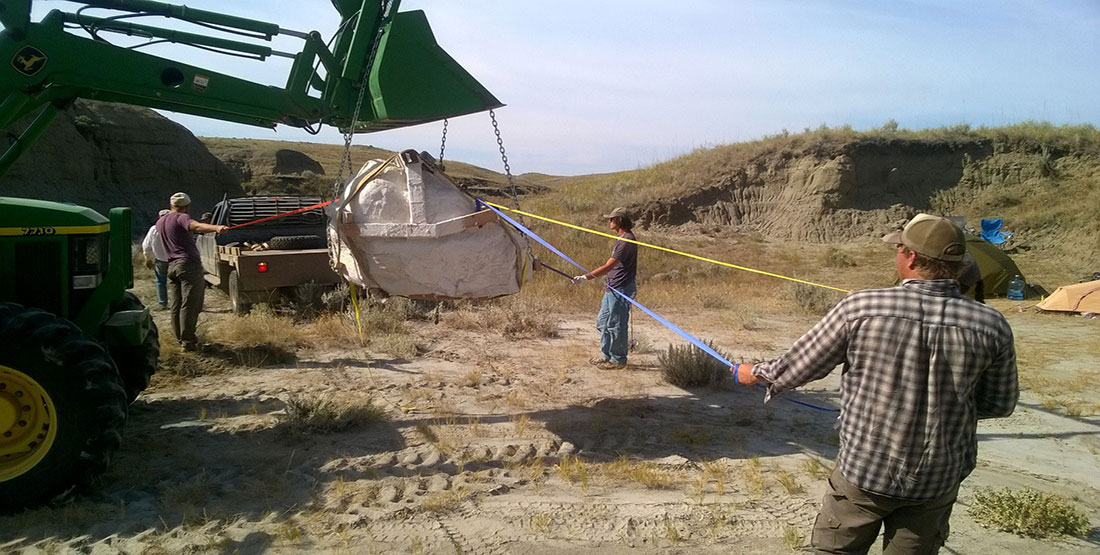 The skull jacket being carefully hoisted from the site thanks to help from a local rancher. 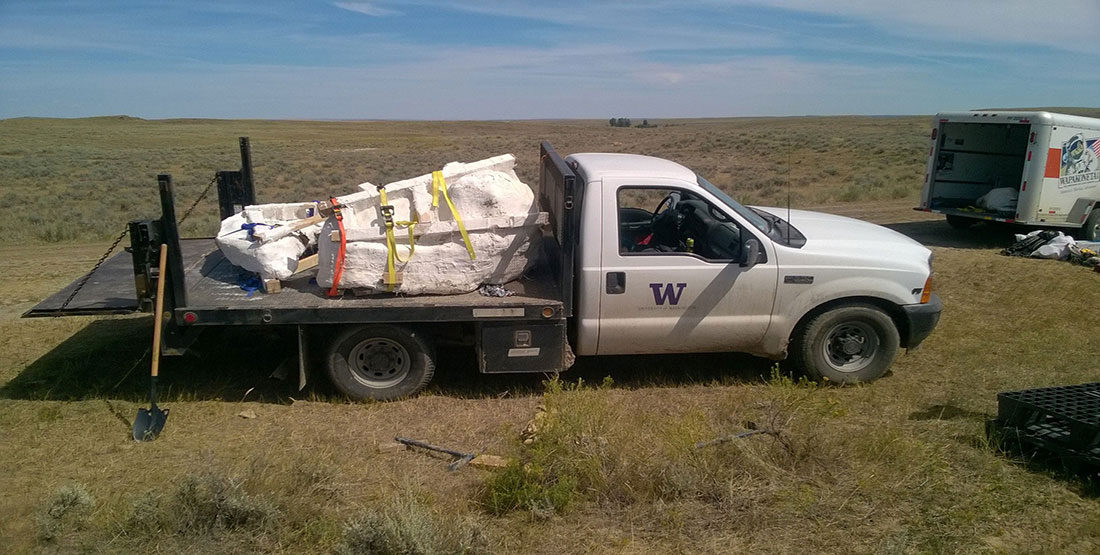 The skull jacket (right) in the flatbed truck for the trip to the Burke Museum. The ribs are next to it (left).

The skull was loaded on the flatbed truck along with ribs, the lower jaw and several other fossils for the trip to the Burke Museum. The T. rex fossils arrived at the Burke on Thursday, August 18, and were offloaded from the truck with the help of the Skanska crew (the New Burke Museum general contractor) and one of their forklifts.

This incredible, month-long, team effort to excavate this T. rex—nicknamed “Tufts-Love Rex” in honor of the two volunteers who discovered it—is just the beginning of what’s to come for this scientifically valuable specimen.

Researchers can learn a lot from the Tufts-Love Rex. For instance, this specimen can give us a greater understanding of how T. rex grew and to what size, whether they were active predators or scavengers, and more. Next summer, Burke paleontologists will search for additional parts of the dinosaur at the site.

Each new discovery creates a fuller picture of what life on Earth was like millions of years ago and provides us greater opportunity to understand what life will be like in the future. 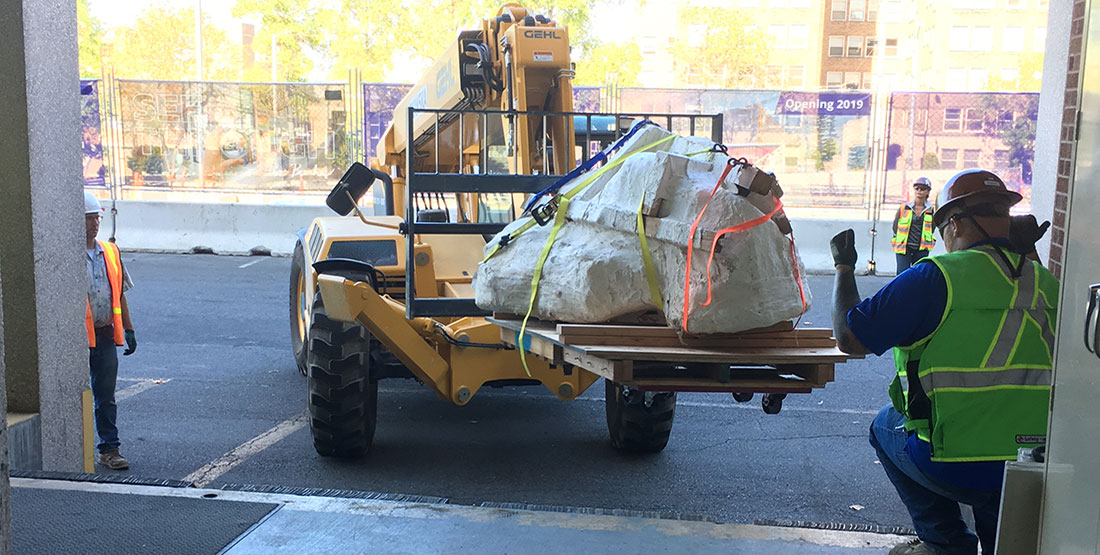 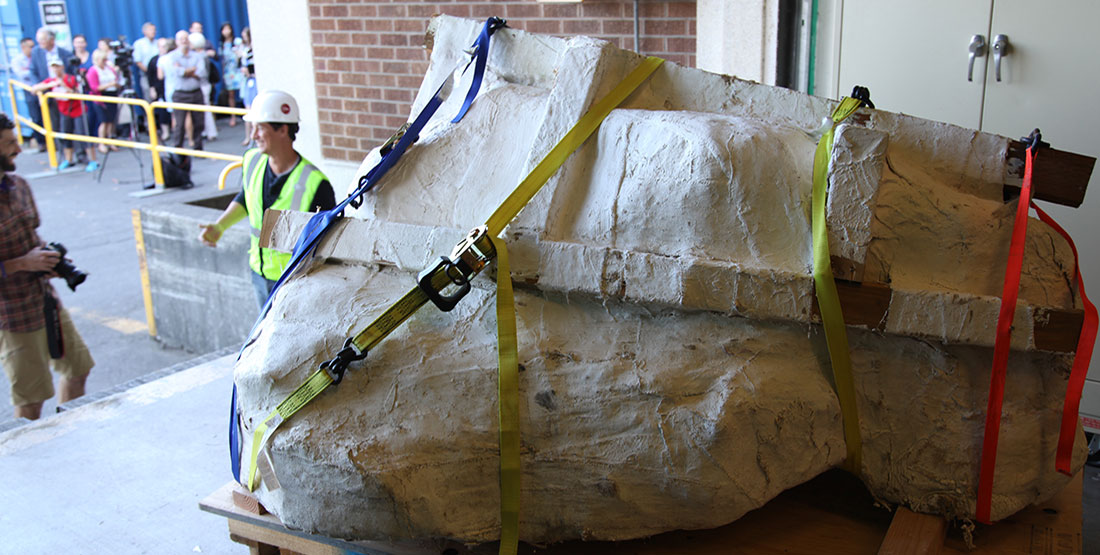 The skull was welcomed to the Burke Museum by the paleontologists who helped excavate it and local media outlets.

What we know so far:

The project, currently led by Wilson, was founded by Jack Horner and Nathan Myhrvold. Burke paleontologists, volunteers, undergraduate and graduate students from the University of Washington and other universities, and K–12 educators participating in the Burke’s DIG Field School contribute to the project.