Scientists have discovered an extraordinary collection of fossils that reveal in detail how life recovered after a catastrophic event: the asteroid impact that wiped out the dinosaurs 66 million years ago at the end of the Cretaceous Period. Described in a paper published Oct. 24 in the journal Science, the unprecedented find – thousands of exceptionally preserved animal and plant fossils from the first million years after the catastrophe—shines light on how life emerged from one of Earth’s darkest hours. 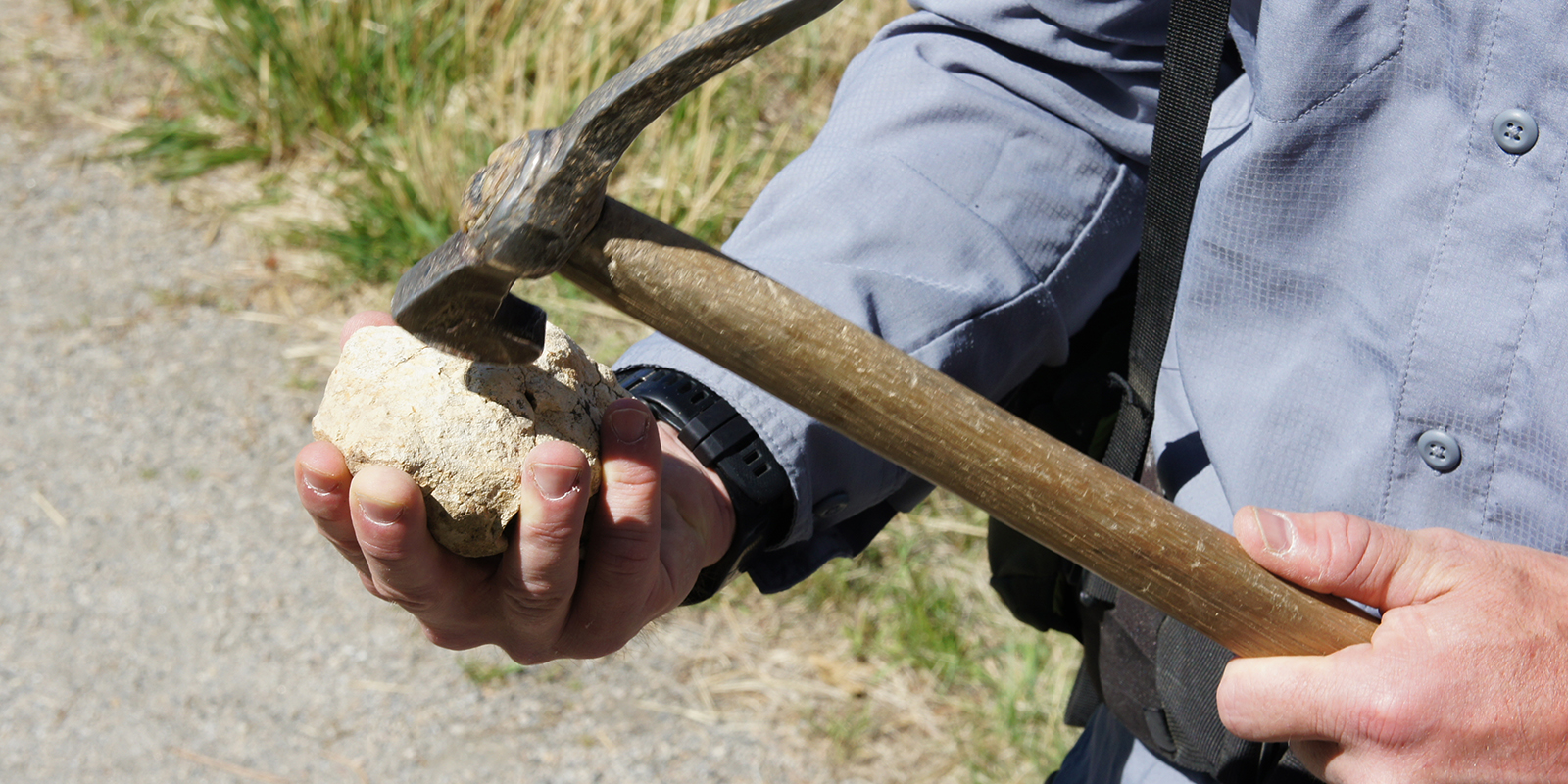 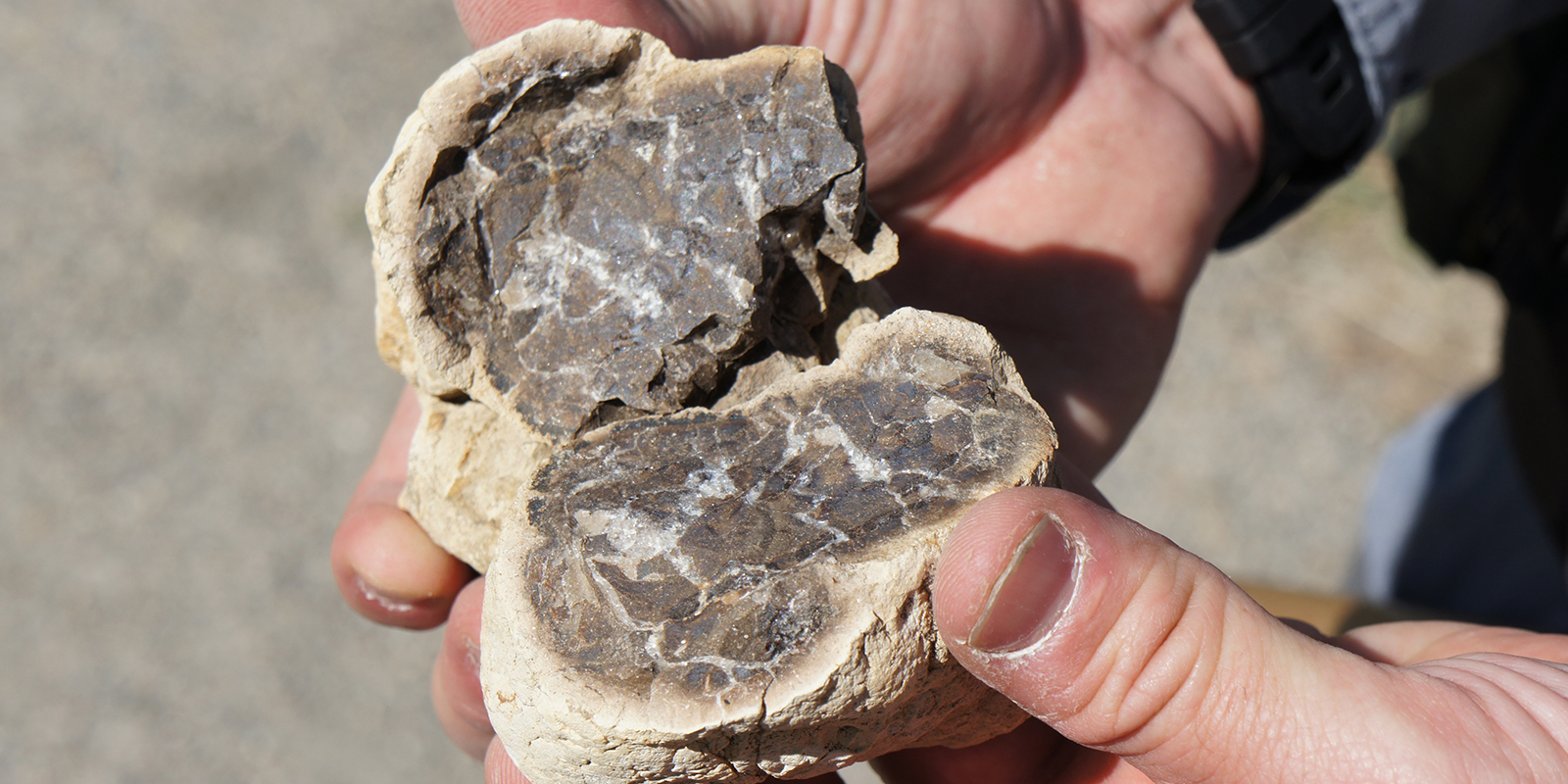 Dr. Tyler Lyson, Curator of Vertebrate Paleontology for the Denver Museum of Nature & Science, holds open a split concretion and reveals the cross section of a vertebrate skull inside. 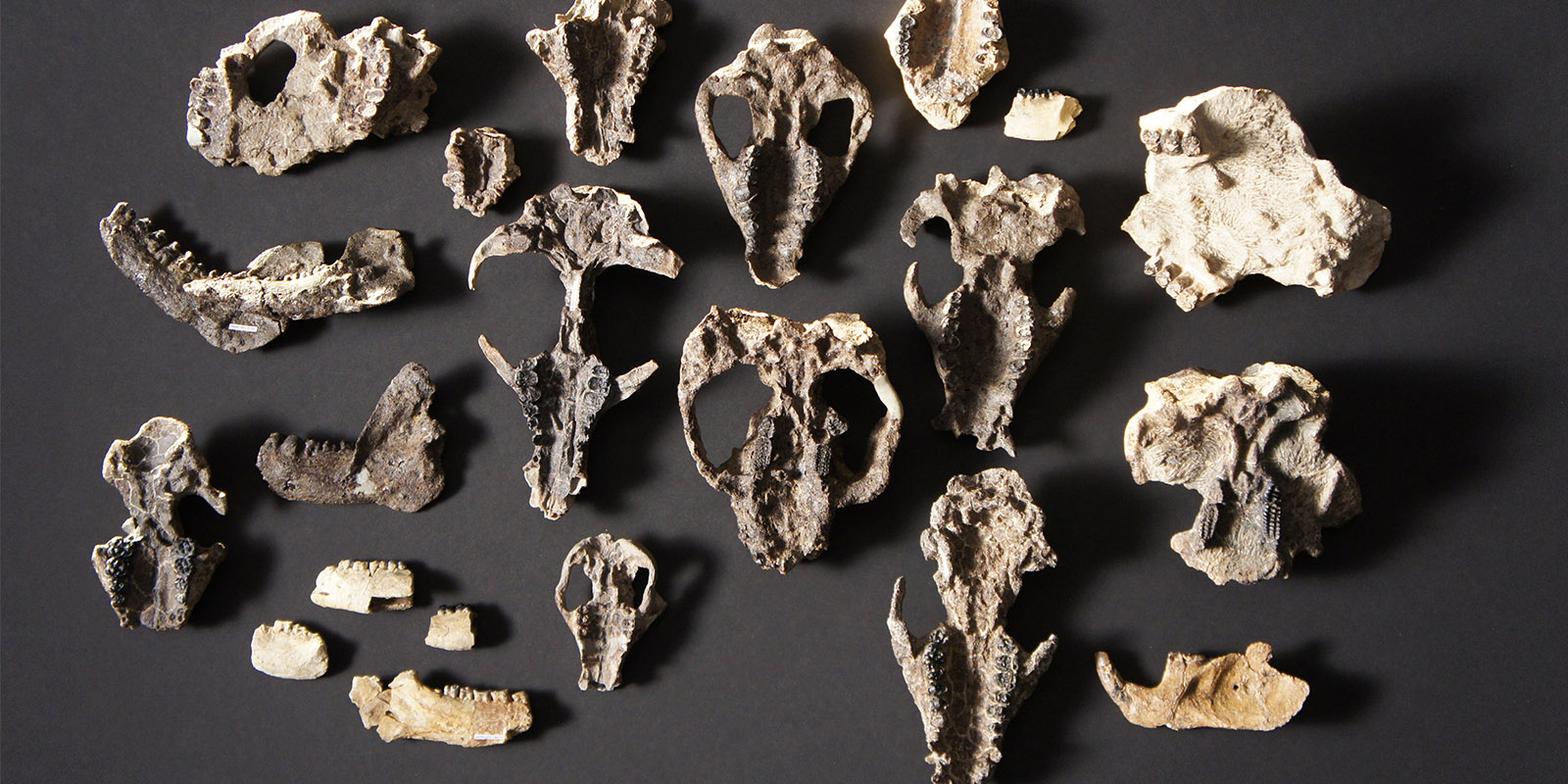 An overhead shot of the prepared mammal skull fossils and lower jaw retrieved from Corral Bluffs. 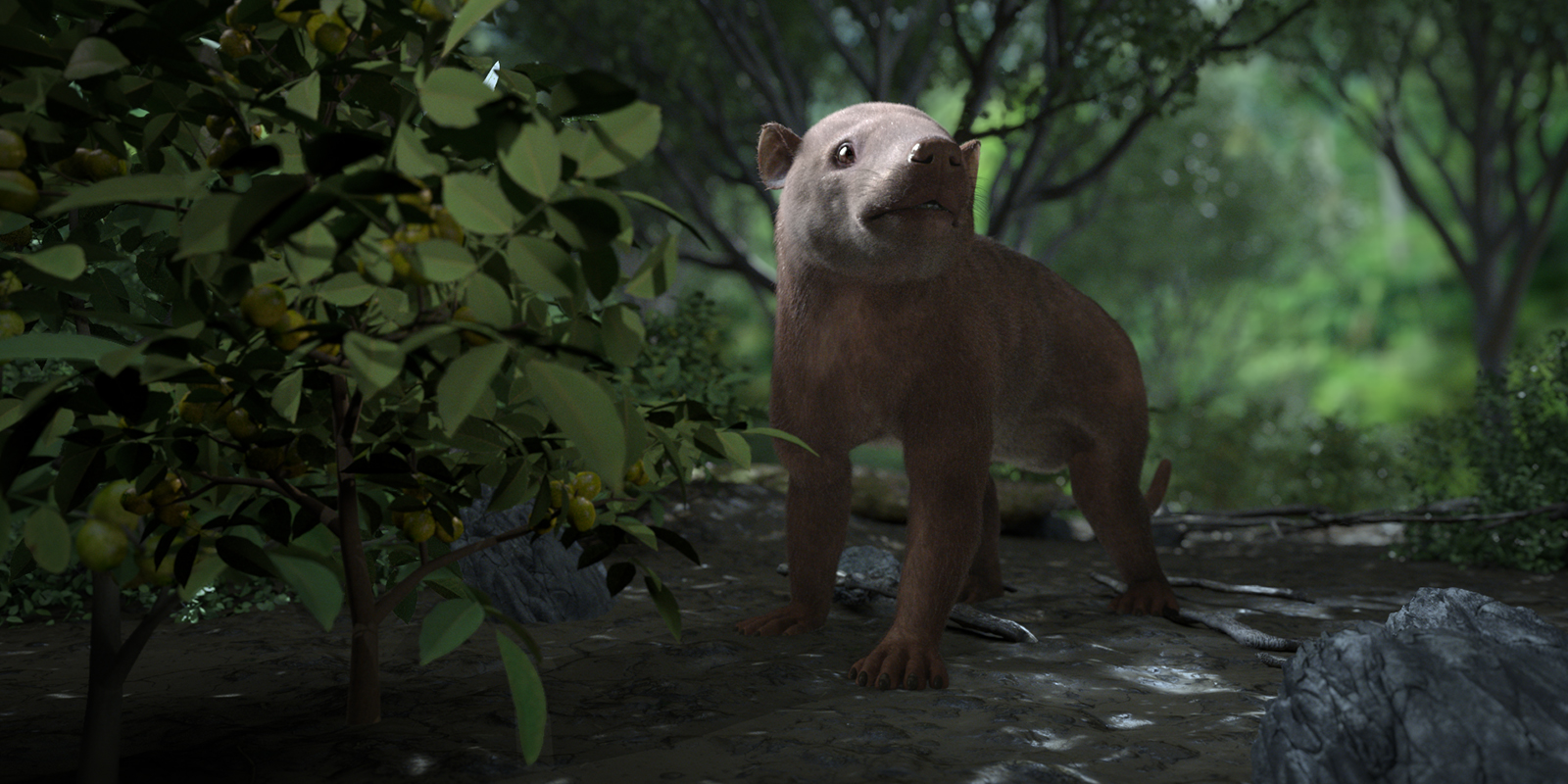 CGI rendering of ancient Carsioptychus mammal taken from the PBS NOVA special, Rise of the Mammals. In this recreation, Carsioptychus coarctatus eats plants in a newly
diversified forest, ~300,000 years after the mass extinction that wiped out the dinosaurs. 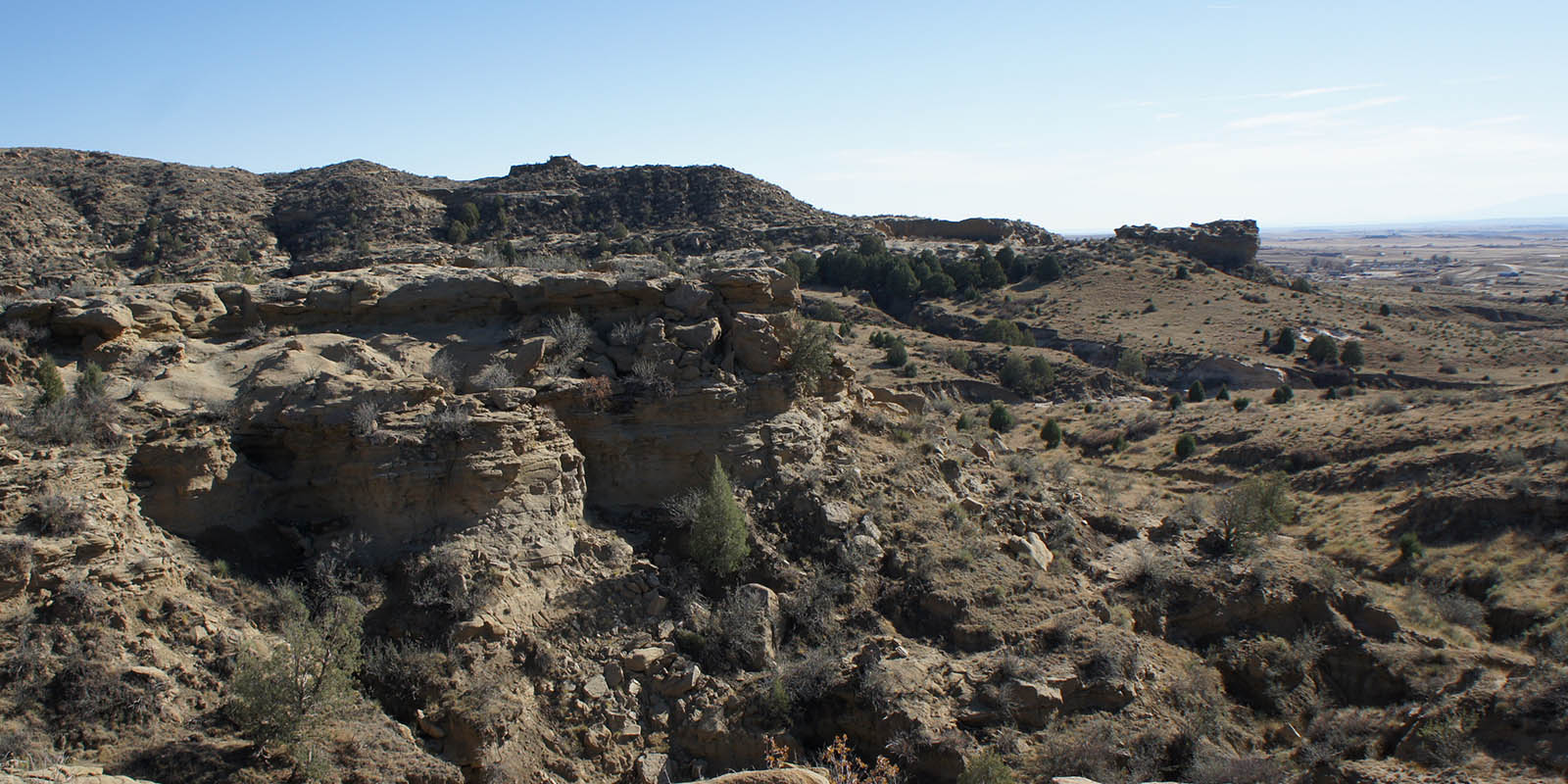 A scenic vista of Corral Bluffs, outside of Colorado Springs, Colorado. Corral Bluffs represents about 300 vertical feet of rock and preserves the extinction of the dinosaurs through the first million years of the Age of the Mammals.

Scientists unearthed this new record from the first million years after the asteroid impact in the region around Colorado Springs, Colorado, which forms part of a larger geological province known as the Denver Basin. The find includes both plants and animals, painting a portrait of the emergence of the post-dinosaur world.

The team behind this discovery was led by two scientists at the Denver Museum of Nature & Science, lead author Tyler Lyson, the curator of vertebrate paleontology, and co-author Ian Miller, curator of paleobotany and director of Earth and space sciences. Among the co-authors is Greg Wilson, a professor of biology at the University of Washington and curator of vertebrate paleontology at the Burke Museum of Natural History & Culture, who joined the team as an expert on the end-Cretaceous mass extinction and the evolution of mammals in its aftermath.

“I’ve been working on this time period and on these mammals for 21 years, and this is truly an exceptional window into this pivotal event in life history,” said Wilson, who was a curator at the Denver Museum of Nature & Science before joining the UW faculty in 2007. “We change over from terrestrial ecosystems dominated by dinosaurs to those that become dominated by mammals in a geological blink of an eye.”

“The course of life on Earth changed radically on a single day 66 million years ago,” said Lyson. “Blasting our planet, an asteroid triggered the extinction of three of every four kinds of living organisms. While it was a really bad time for life on Earth, some things survived, including some of our earliest, earliest ancestors.”

A moment of serendipity pointed the way to these rare fossil finds. Lyson, who had been looking for post-impact vertebrate fossils without success, took inspiration from a fossil that had been sitting in a museum drawer and fossil-hunting techniques used by colleagues in South Africa. In the summer of 2016, he stopped looking for glinting bits of bone in the Denver Basin and instead zeroed in on egg-shaped rocks called concretions.

Cracking open the concretions, Lyson and Miller found fossils such as the skulls of mammals from the early generations of survivors of the mass extinction. Since most of what is understood from this era is based on tiny fragments of fossils, such as pieces of mammal teeth, finding a single skull would be exceptional. Lyson and Miller found four in a single day and more than a dozen in a week. So far, they’ve found fossils from at least 16 different mammalian species.

Wilson participated in excavations at Corral Bluffs, a site just east of Colorado Springs. He and co-author Stephen Chester, an assistant professor at the City University of New York’s Brooklyn College, worked to identify the mammal fossil that the team found, calculate changes in body size over time and analyze the diversity of species after the asteroid impact. The researchers determined that just 100,000 years after the cataclysm, mammalian diversity had approximately doubled. At 300,000 years after the impact, the maximum body mass of mammals had increased threefold, and mammals were evolving specialized diets, possibly in response to changes in plant diversity.

These findings illustrate how the Denver Basin site also is adding evidence to the idea that the recovery and evolution of plants and animals were intricately linked after the asteroid impact. More than 6,000 leaf fossils were collected as part of the study to help determine how and when Earth’s forest rebounded after the mass extinction event. Combining a remarkable fossil plant record with the discovery of the fossil mammals allowed the team to link millennia-long warming spells to specific global events, including massive amounts of volcanism on the Indian subcontinent.

These events may have shaped the ecosystems half a world away. For example, the research team saw another increase in body size among mammals at about 700,000 years post-impact, which coincided with the evolution of legumes, then a new type of plant. Additional analyses of these fossils, as well as the unearthing of new specimens, will only deepen scientists’ understanding of this critical period in Earth’s history and the evolution of mammals that came before humans.

“Our understanding of the asteroid’s aftermath has been spotty,” Lyson explained. “These fossils tell us for the first time how exactly our planet recovered from this global cataclysm.”

Adapted from a release by the Denver Museum of Nature & Science.