A new study reveals that 65 plant species have gone extinct in the continental United States and Canada since European settlement, more extinctions than any previous scientific study has ever documented. 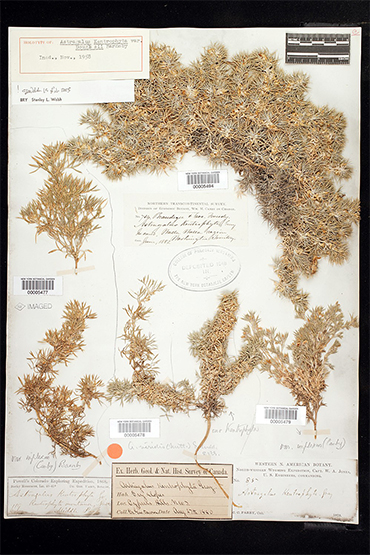 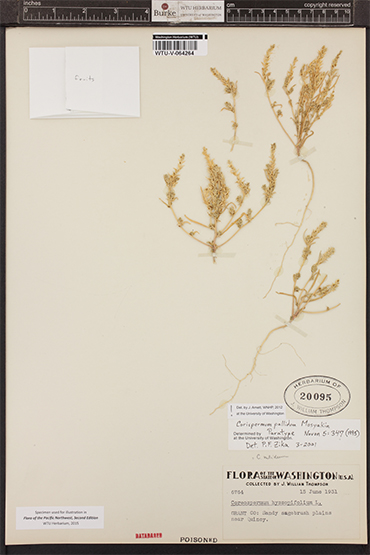 Corispermum pallidum (pale bugseed) is one of two Washington-specific extinct species identified in this study.

Led by Wesley Knapp of the North Carolina Natural Heritage Program, a group of 16 experts from across the United States—including Burke Museum Herbarium Curator and University of Washington Biology Professor Richard Olmstead—collaborated to document the extinct plants of the continental United States and Canada for the first time in history. Their groundbreaking report has been published by the international journal Conservation Biology.

The team found that most plant extinctions occurred in the western United States, where the vegetation was minimally documented before widespread European settlement. Because many extinctions likely occurred before scientists analyzed an area, it is extremely likely the 65 documented extinctions vastly underestimate the actual number of plant species that have been lost. Previous studies documented far fewer plant extinctions on the North American continent.

In Washington State specifically, the team found two confirmed extinctions: Astragalus kentrophyta var. douglasii (thistle milk-vetch) and Corispermum pallidum (pale bugseed). While neither of these Eastern Washington species were ever abundant, their disappearance is likely due to the human impact of changing land use that has dramatically reduced the populations of countless other species, many of which are likely to follow these into extinction, unless efforts to protect what remains of native habitat are stepped up.

“Preventing extinction is the lowest bar for conservation success we can set, yet we are not always successful,” Knapp said. “This study started as an academic question but later developed into an opportunity to learn from what we have lost. By studying the trends and patterns of plants that have already gone extinct, hopefully we can learn how to prevent plant extinction going forward.”

"Documenting extinction is difficult; but herbarium records can say where and when a species was last observed and guide the search for surviving members."— Dick Olmstead

Of the 65 documented extinctions in the report, 64% were known only from a single location. While conservation often focuses on protecting entire landscapes, this finding points to the importance of small-scale site protection in order to prevent extinctions. Extinct species are still being described from old herbarium specimens, underscoring the importance of continued documentation of the flora and supporting museum collections like the Burke Herbarium.  Corispermum pallidum, one of the species extinct in Washington, was first collected in 1893. Yet the species wasn’t formally “discovered” until much later when it was first described as a new species posthumously in 1995. Only a handful of herbarium specimens exist today.  The Burke has three, including one of the two collections from 1893 and the last known collection from 1931.

“There is no living memory of either of these species today,” Olmstead said. “Herbarium collections record our flora as it was historically and provide documentation of change, and loss, over time, whether through direct human impact, or indirectly through climate change and the impact it will have on plants. Documenting extinction is difficult; but herbarium records can say where and when a species was last observed and guide the search for surviving members.”

This work also highlights the need for collaborative science in addressing large-scale conservation issues. The team of 16 botanists from across the United States includes experts with state and federal government agencies, numerous botanical gardens, museums, not-for-profit organizations, regional conservation groups, and academic institutions. To answer the overarching question of what exists and where, the team of experts cross-checked thousands of records to ensure accuracy, discovering that botanical gardens occasionally harbored the last of an extremely rare species and may not have been aware they were doing so.

Because plants serve as the foundation for most terrestrial ecosystems, the urgency for documenting plant extinctions is especially great if extinction rates rise as predicted over the next century. Anne Frances, lead botanist at NatureServe, states, “In most cases, we can stop plants from going extinct, we just need the resources and commitment to do so.”

This press release was adapted from an original release published by the North Carolina Department of Natural Resources and is shared with their permission.