Microscopic organisms are key indicators of the health of Puget Sound

Burke Museum paleontologists find that tiny organisms called foraminifera have a big story to tell about the health of Puget Sound.

Two recent studies about the health of Bellingham Bay and inlets in the Bremerton area found the diversity and number of foraminifera—single-celled, marine organisms that live on the sea floor—deteriorated significantly. The decline of these microscopic organisms is consistent with the deterioration of snails and other larger marine animals, even though analysis showed a reduction of chemical pollutants in Bellingham Bay and Bremerton over the same period of time. 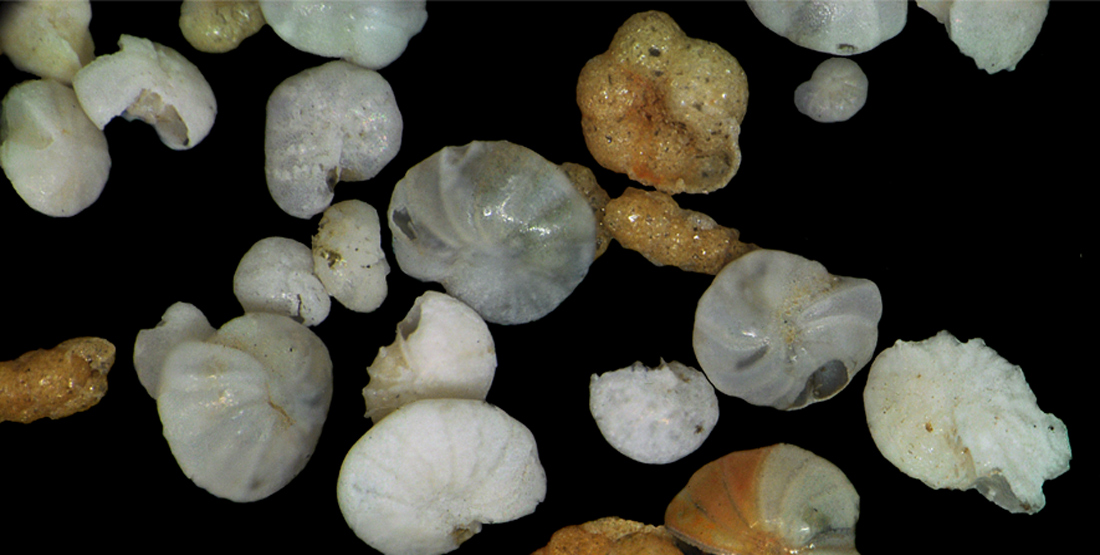 A variety of Foraminifera (or forams)—single-celled, marine organisms that live on the sea floor.

Even though chemical analysis of the water suggests Bellingham Bay and Bremerton waters are healthy, foraminifera are telling us a different story. However, it is important for us to provide independent, scientific studies for society to then decide how to best address the health of the Puget Sound.

Dr. Liz Nesbitt, Burke Museum curator of invertebrate and micropaleontology and Associate Professor of Earth and Space Sciences at the University of Washington, and Postdoctoral Researcher Dr. Ruth Martin, who lead the Burke’s Puget Sound Foraminifera Lab, conducted independent studies using Washington Department of Ecology sediment samples and associated water and environmental data. The Bellingham Bay study, published in the Marine Pollution Bulletin on June 6, 2015, analyzed 73 samples from 1987, 1997, 2006 and 2010. In a study published November 5, 2015, in the journal Marine Micropaleontology, Martin and Nesbitt analyzed 47 samples from the Sinclair and Dyes inlets in Bremerton that were collected in 1974, 1998/1999 and 2008/2009.

There are two major groups of foraminifera: one produces shells of calcium carbonate, the other has shells consisting of tiny grains of sediment stuck together. Both types of shells readily preserve in the sediment and document the environments in which the organisms lived. Some species of foraminifera are highly sensitive to environmental stress, and disappear rapidly when trouble arrives. Others are extremely tolerant, thriving where others do not and acting as opportunistic colonizers of places such as sewage or industrial waste outfalls. Many sites in Bellingham Bay and Bremerton are now dominated by particularly pollution-tolerant species of foraminifera. In addition, very few foraminifera were found in 2008 samples from Bremerton’s Sinclair Inlet.

However, in a finding surprising to researchers, no correlation was found between foraminifera and individual pollutants (such as mercury) or classes of pollutants analyzed in this study. In addition, the decline in the diversity of foraminifera and rise of pollutant-tolerant species continues despite cleanup efforts that have been ongoing in both Bellingham and Bremerton since the mid-1980s. A 2010 study indicated Bellingham Bay fell within established acceptable limits for pollution. In the Bremerton area, biologists studying macro-organisms like snails found these animals were also on the decline. Thus, researchers are investigating whether the decline of foraminifera is due to an alternative environmental factor.

While additional data is required to identify the cause of foraminifera populations’ decline, their shells contain a valuable clue. Nesbitt and Martin found many individuals with calcium-based shells showed physical signs of deterioration. In both the Bellingham Bay and Bremerton samples, researchers found holes and missing sections in the shells—both of which suggest high acidity in the water.

Both low oxygen and high acidity can be caused by the decomposition of organic matter, which is prevalent in Bellingham Bay and may be related to agriculture, logging and paper industries dating back more than 150 years. Industrialization has left a legacy of contaminants that are still present in the Bay’s water and sediment. In Bremerton, a century of pollutants from military, residential and agricultural sources have impacted its waters, which are separated from the main Puget Sound Basin by Bainbridge Island, forming a unique subsystem of Puget Sound that has sluggish water circulation. It can take up to 32 days for water to circulate out of the area, further compounding water quality problems.

"The dissolved foraminifera are indirect evidence of acidity in the water," said Dr. Ruth Martin. "In the future, collecting pH and dissolved oxygen levels at the bottom of the water would help confirm acidification in Bellingham Bay and the inlets of Bremerton."

With these findings in mind, the Department of Ecology is now asking scientists what additional data should be collected to identify the cause of marine organisms’ decline and better measure the health of Bellingham Bay and Puget Sound. In addition, the State is revising the industry standards for chemical and toxicity analysis indices.

“Even though chemical analysis of the water suggests Bellingham Bay and Bremerton waters are healthy, foraminifera are telling us a different story,” Nesbitt said. “However, it is important for us to provide independent, scientific studies for society to then decide how to best address the health of the Puget Sound.”

Nesbitt and Martin’s study provides a snapshot in time of the health of two areas of Puget Sound. Their lab is currently researching the health of foraminifera in Commencement Bay and other areas of the Puget Sound watershed.