Unpacking a phrase: The Chilkat blanket

My first encounter with the alluring and boldly graphic ceremonial dancing blanket, known extensively as the Chilkat blanket, was this past summer. A friend had asked me to assist in suspending one of these northern Pacific Coast Native woven creations from a wall in his gallery, and I was at once taken aback by the complex, fractured design, the striking tightness of the weave and the subtle—yet impactful shifts—in the blanket’s texture, as well as the rhythmic nature of the limited color palette.

What awed me the most, though, struck me while gently encouraging the layers of fringe cascading from the base of the design field to lay flat against the wall.  It was at this point that my friend enlightened me to the fact that the vertical strands (known as the warps) concealed beneath their fluffy vanilla exterior of mountain goat wool a heart of cedar bark, which provided stability and substance to the blanket.

These vertical warp strands function as the supporting ribs for the whole textile, and were breathtakingly delicate to the touch! As I ran across historic photograph after historic photograph within the Burke’s Ethnology Archives depicting noble Tlingit and Haida figures enveloped in these expressionistic and esteemed Chilkat blankets (Figure 1), I knew that I needed to explore the cultural identity embedded in these woven garments. 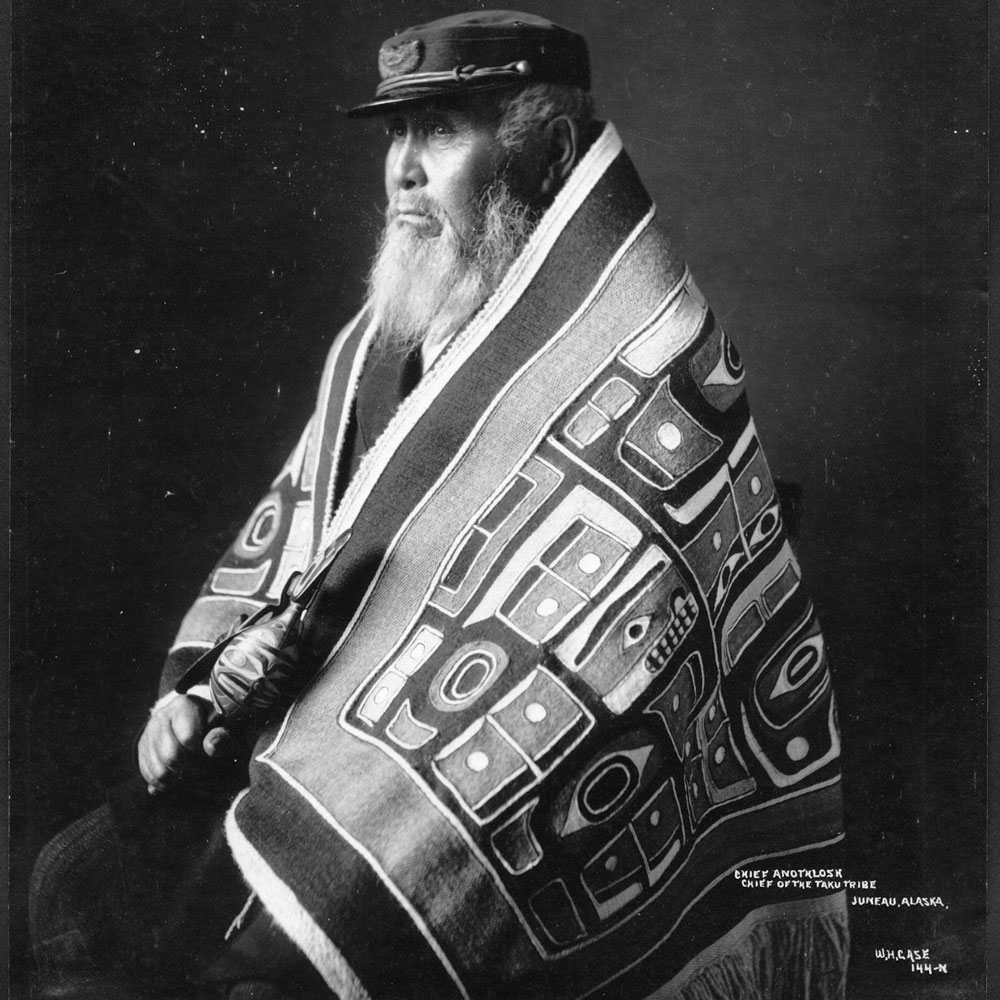 Figure 1. A photograph taken in the commercial photography studio of Case & Draper based out of Skagway, Alaska.

Unpacking a Phrase: What is a Chilkat blanket? What Native culture was the brainchild of this weaving art?

Unlike the way by which many of us encounter the Chilkat blanket today—spread flat and hanging in a museum case, the Chilkat blanket was conceived to be a royal object in motion: the fringe swirls and sways as the wearer— with the blanket draped over his or her shoulders much akin to a shawl—dances, dipping and turning to a drum beat (see a photograph of one in motion here).

By the mid- to late-1820s, the Tlingit, Haida, and Tsmshian tribes (see map here of geographical distribution of cultural groups) were weaving what is now referred to as the “classic” Chilkat blanket style, discernible by the sophisticated almost-cubist design principle in which a crest animal or creature (which visually communicated the original wearer’s house or clan identity) is dissected into a multitude of abstracted and flat (non-three dimensional) body facets and spread out amongst the design field in dizzying complexity so as no space is left uncovered.

These faceted body parts, outlined in flowing curvilinear and interconnected black lines known as formlines, were rendered with minimal diversion* in a specific color palette of lemon yellow and blue-green or robin’s egg blue over the ivory ground (the natural color of the mountain goat’s wool). All of these fragmented eyes, feathers, fins, paws, and human-like faces are divided amongst a central panel and two flanking side panels, and enclosed within a pronounced border of yellow and black bands that mirror the five-sided form of the overall blanket. The dangling fringe that lines the two vertical sides and the two bottom edges that terminate in a downward-facing point is also fundamental to the blanket’s decoration (Figure 2, as well as Figure 3). 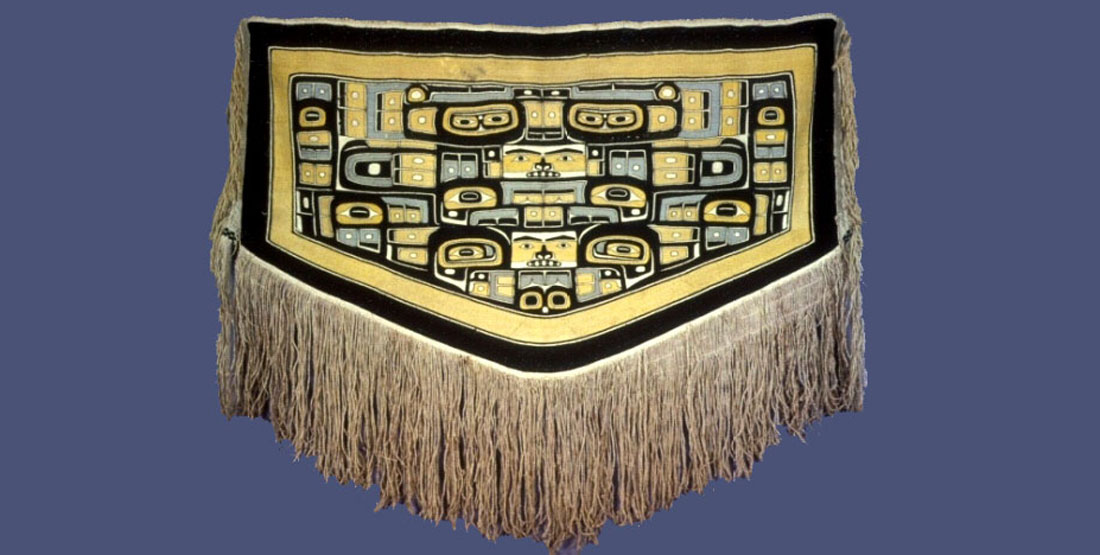 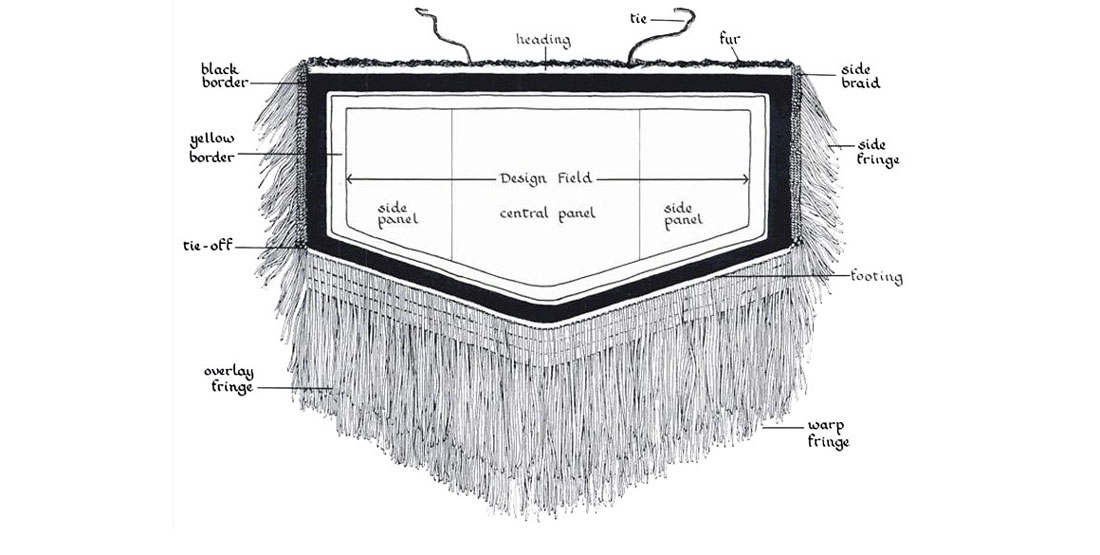 Figure 3: This diagram details the location of various elements of a Chilkat blanket.

One of the first questions emerging in my head was why these distinct robes are known by the sweeping term of “Chilkat blanket” even though multiple Native tribes along the North Pacific Coast historically wove these blankets to be worn by noble women and men (particularly chiefs) on extraordinary ceremonial occasions?

The general styling and weaving technique of this blanket is announced by Native oral histories to have sprung from the creativity of the Coast Tsimshians, and spread to the Tlingit and Haida (and the Kwakwaka’wakw (Kwakiutl) culture by means of marriage). Despite early European explorers’ encounters with the woven woolen blanket, it was not until the early 1880s after the display of several Northwest Coast Native artifacts in Philadelphia at the Centennial International Exhibition of 1876 that a deep desire developed amongst many natural history museums in America to collect artworks from these northern Pacific coastal cultures.

By this time, the distinct blankets were christened as “Chilkat Blankets” by white traders due to the preponderance of these dancing blankets materializing from the Tlingit tribe of the Chilkat located near Klukwan, Alaska. The Tlingit traditionally referred to the blanket as Naaxiin (interpreted as “fringe about the body”) and the Tsimshian as Gwis-halait (interpreted as “dancing blanket”).

Many believe the Chilkat weave to be one of the most complex of styles in the world. Women of both the Tlingit and Haida—who bore sole responsibility for the preparation of materials and weaving the blankets following the spring-time harvesting of cedar bark and mountain goat—intricately formed Chilkat blankets by similar twined weaving techniques as the cultures’ baskets: yarn constructed by spinning together two strands of cord made from the plucked wool of mountain goat was utilized for the strands to be visible on the surface of the blanket (known as the wefts), and was woven horizontally from left to right over passive vertical strands comprised of a hearty core of shredded and twisted cedar bark encased in a layer of mountain goat wool (known as the warps, and concealed in totality by the weft strands) (Figure 4).

The twined weaving stitch predominantly used was the plain (or two-strand) stitch in which each stitch amounts to one weft strand going in front and one going in back of the warp strand before being twisted. The abstracted body fragments of the design were woven in one small section at a time before being united together (click here for an early twentieth century photograph of a Tlingit woman in the act of weaving).

You may be wondering at this point how the women were able to translate the curvilinear formline designs they derived from a painted wood pattern board (furnished by a male of the tribe) into a woven tapestry work?

This unique ability to fashion orderly and graceful curves that could travel without confinement over the woven surface, as well as complete circles, was the result of the weavers’ distinguished invention of a weaving technique known as braided twining: three strands of spun mountain goat wool are braided kindred to how a woman would braid her hair, and this braided cord is then secured to either a weft strand (if the weaver desired to travel vertically) or a warp strand (if the weaver desired to travel horizontally) to form a beautiful raised twisted line that outlines shapes within the design (Figure 5). 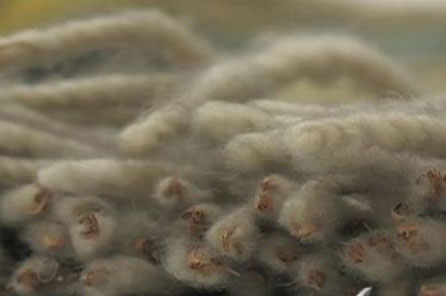 Figure 4: This close up view of a Chilkat blanket’s warp strands reveals the cedar bark core hidden beneath an exterior of mountain goat wool. 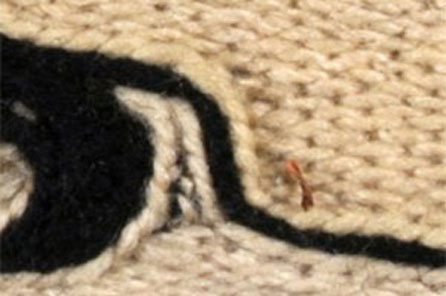 Figure 5: A close-up view of a Chilkat blanket’s woven segment depicting a human-like face illustrates the appearance of the braided twining, detectable by the raised, twisted cord that defines shapes.

The Tsimshian lore accounting for the blanket’s origin symbolically discloses why a crest animal was the chosen subject of depiction: “In mythical times—when animals were still men, wearing the animal skins as blankets…Their coats of fur were mere protective coverings to be removed at will, and they often appeared in human form.” **

In kind, the human-like face that appears in many of the blankets is said to be representational of the spirit of the crest animal. The Chilkat blanket’s abstracted design principle, however, with the crest animal or creature’s body parts dissected and distributed across the design field can make for complicated interpretation. Scholars in the field are not in agreement as to what each design graphically represents (for which there are dozens of designs despite their seemingly identical appearance upon first glance); nevertheless, many do feel that hidden within the design are forms that specify a specific creature. 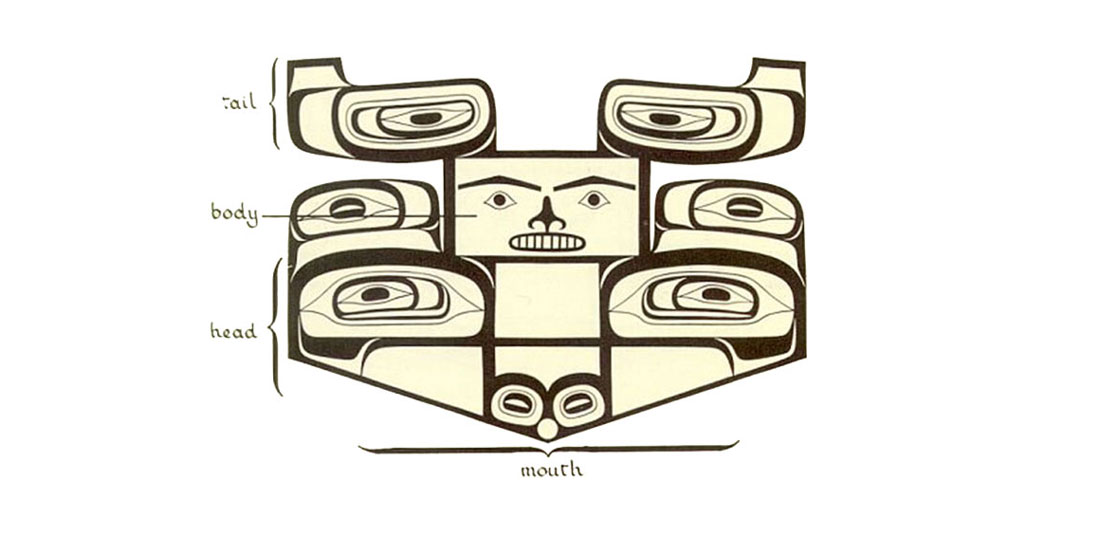 I strongly feel that the beauty of Chilkat blankets, with their bold and visually stunning graphic nature, is truly magnified by the intimate connections and associations imbued within their woven threads by their creators.

* Inclusion of red-dyed wool and olive/khaki green-dyed wool are present on a small sampling of Chilkat blankets.

Want to know and see more? Check out the Burke’s holdings of Chilkat blankets, and consult the following sources: