Twenty-five years ago, the film "Jurassic Park" appeared on the big screen. At that time, I was a college student working in the paleontology lab of the Museum of the Rockies, where Jack Horner (on whom the lead character Alan Grant is based) was the curator. I even made molds of dinosaur bones used to create props for the excavation site sequence in the movie, so I couldn’t wait to see the premiere.

Seeing the dinosaurs, not as jittery stop-motion models or clumsy rubber puppets, but as living, breathing animals was tear-inducingly awesome. And of all those extinct creatures depicted with such stunning realism, the most famous and fearsome was Tyrannosaurus rex.

It’s hard to imagine T. rex not having a starring role in a movie about dinosaurs. Everybody recognizes T. rex, even people with no interest in dinosaurs at all. But why? What makes it so special?

The public was first introduced to the name Tyrannosaurus rex (tyrant lizard king) by the paleontologist Henry Fairfield Osborn in his original description of the animal in 1905. The first specimen (now displayed at the Carnegie Museum of Natural History in Pittsburgh) was found in Montana, and despite being incomplete had enough bones preserved to identify it as a bipedal carnivorous dinosaur larger than any others known.

A second and more complete skeleton (displayed at the American Museum of Natural History in New York) was soon discovered, offering a more complete look at the skeleton of this huge beast. Putting these impressive specimens on display in two of the nation’s largest natural history museums during a time when public interest in paleontology was rapidly growing got T. rex off to a good start.

Being a gigantic and terrifying beast with teeth the size of bananas, huge clawed feet, and comically small arms provided lots of fuel for the imagination. T. rex soon moved beyond the museum setting, and began showing up in art and illustrations, comics and graphic novels, and later moved to the silver screen and to television (even commercials) and popular music. Despite such popularity, for decades those two museums were the only places where a standing T. rex skeleton could be seen.

Fortunately, that changed. As more specimens were discovered, opportunities to see them increased and our understanding of the species continued to evolve. The addition of a few more whole (mostly) skeletons in the 1980's and 1990's (especially the famous and controversial “Sue” specimen now displayed at the Field Museum of Natural History in Chicago) expanded the options for T. rex viewing in the United States in a westward direction.

The past two decades have yielded still more specimens, increasing the amount of data available for analysis of the ontogeny (changes during growth/development of an individual) and phylogenetics (evolutionary history) of T. rex.

We’re learning more about their origin, their locomotion, vision, feeding, metabolism, injuries/diseases, and reproduction every year. Some specimens have been replicated by molding and casting, allowing copies to be displayed worldwide (Antarctica is the only continent which hasn’t exhibited one) and further expanding the reach of this iconic dinosaur (despite those short arms).

Today there are around three dozen specimens of T. rex held in museum collections and accessible to science, including just 17 partial or complete skulls. You can now see one of those skulls right here in Seattle, and it’s a beauty! 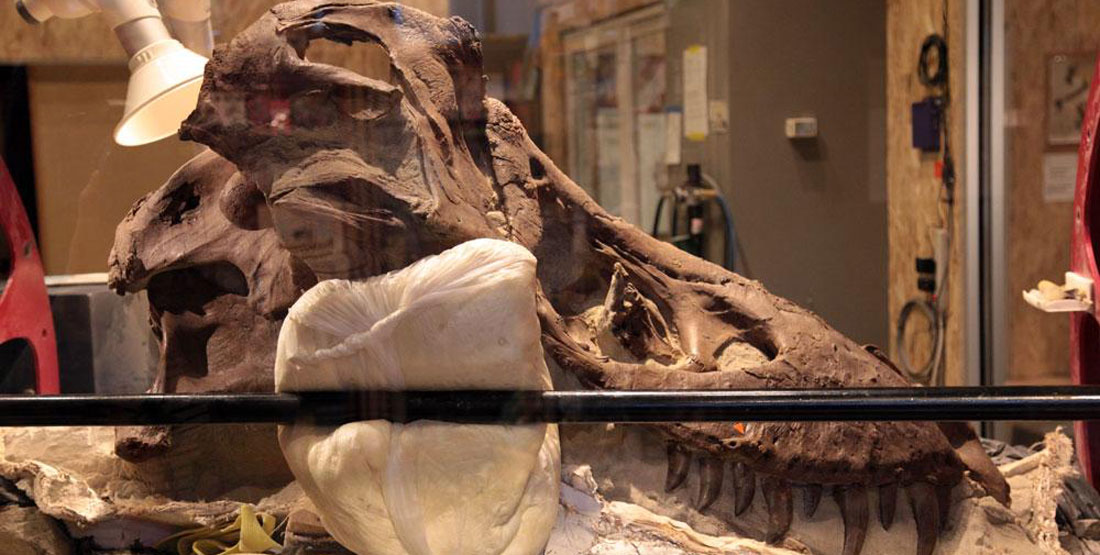 The "Tufts-Love" T. rex skull being prepared while on display at the Burke Museum.

In 2016, curator Greg Wilson led a team of paleontologists from the University of Washington’s Burke Museum that recovered a partial skeleton of T. rex from the Hell Creek Formation in eastern Montana. The dinosaur was discovered by two Burke volunteers (Luke Tufts and Jason Love), and was excavated by a crew led by Burke postdoctoral fellow Dave DeMar with a paleontological excavation permit from the Bureau of Land Management and funding from Nathan Myhrvold.

The "Tufts-Love" T. rex is now undergoing preparation at the museum, where visitors can watch the process every day. While perhaps about 30 percent of the skeleton appears to have been preserved, we certainly got the right 30 percent! This is the fifth T. rex skull that I’ve done (all of the others are also from Montana) and it is the most well-preserved of all of those.

A few of the bones are displaced, but most of the skull is articulated in the correct anatomical position and there is only minimal crushing or distortion. The term “exquisite” does not overstate the quality of this specimen. Once preparation is complete, the skull will need to be mounted for display in the New Burke, so catch it now while it’s available to be seen!

But first, sit back and enjoy the latest offering in the Jurassic Park movie franchise. While these films definitely put the fiction in science-fiction, they satisfy our curiosity by exploring a question that nearly everyone who looks at a dinosaur ponders: what would it be like for us humans to interact with these animals? By bridging a 66 million year gap in time, the films give us some inspiring, thrilling, and sometimes terrifying answers.

Better still, they get people excited about dinosaurs and paleontology. There is currently a whole generation of paleontologists working in our museums and universities who will testify that seeing Jurassic Park 25 years ago was at least partly responsible for their career choice. I like to think that seeing that steely-eyed, Jeep-chasing T. rex had something to do with it.

Michael Holland is an artist and fossil preparator from Montana specializing in the creation of natural history museum exhibits. His work can be seen in several museums, including the Museum of the Rockies, The Carnegie Museum of Natural History, and the Smithsonian. He is now working at the Burke Museum as the lead preparator of the Hell Creek Project. 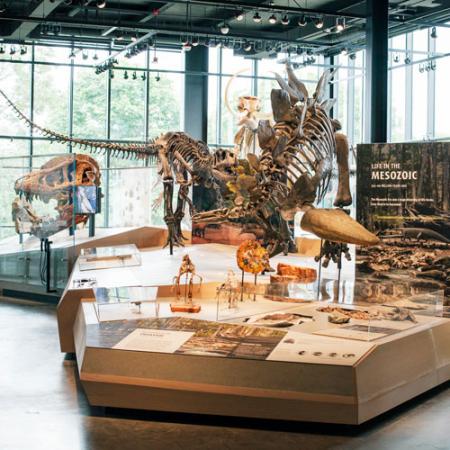 Celebrate National Fossil Day with us!