Returning to the field to look for the rest of T. rex

What else was hiding in those dusty hills?

Last year, the Burke discovered a Tyrannosaurus rex in the badlands of northern Montana, including a skull that weighed 3,000 lbs in its plaster field jacket—only the 15th ever discovered. The exciting discovery occurred when the excavation trip was almost over, so the crew prioritized getting the skull safely to the Burke over fully exploring the site.

This summer, the team led by Burke Curator of Vertebrate Paleontology and University of Washington (UW) professor Dr. Greg Wilson headed back to find the rest of the ‘rex. 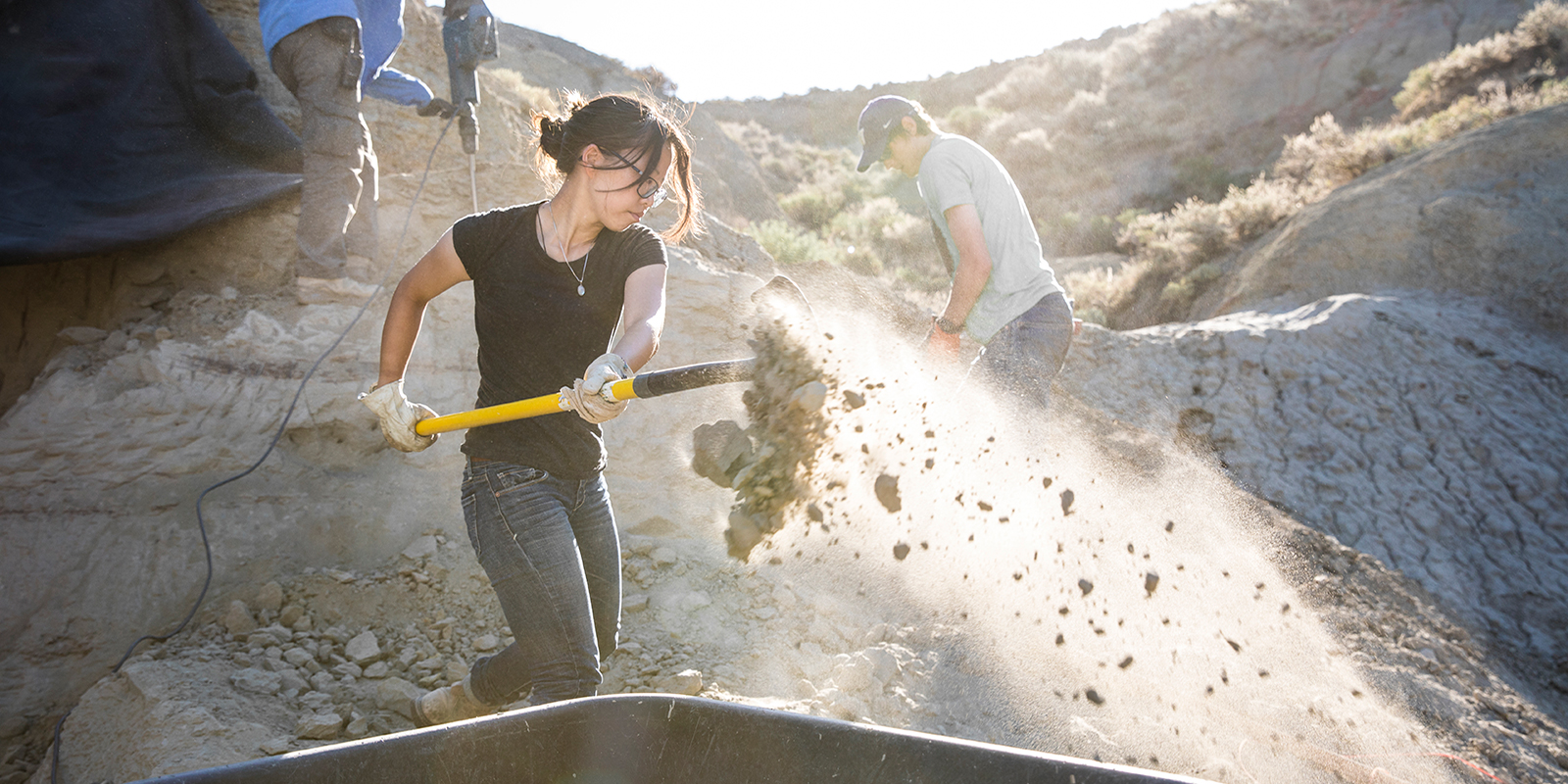 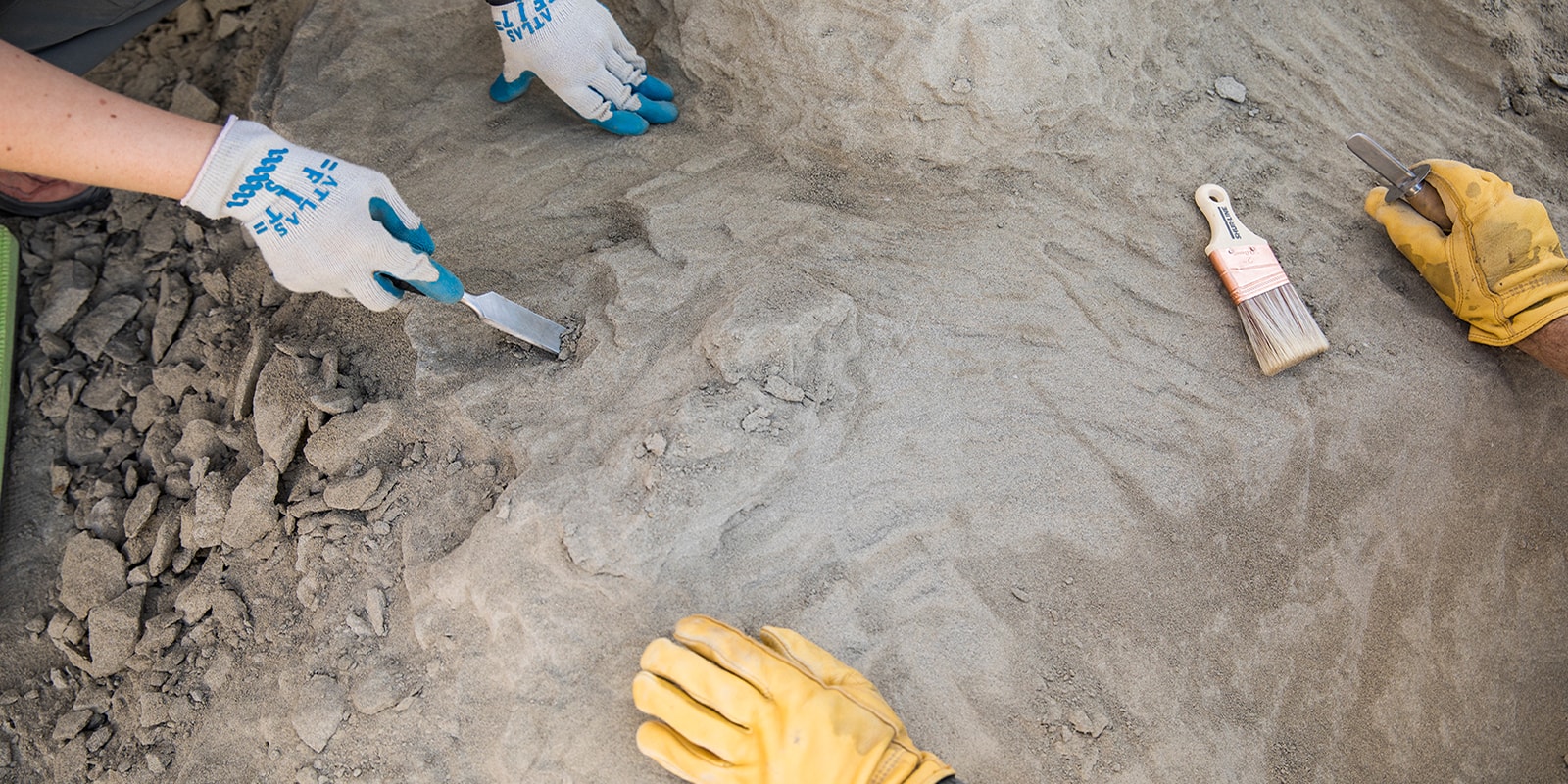 Volunteers use chisels to carefully dig through layers of dirt during the search for fossils. 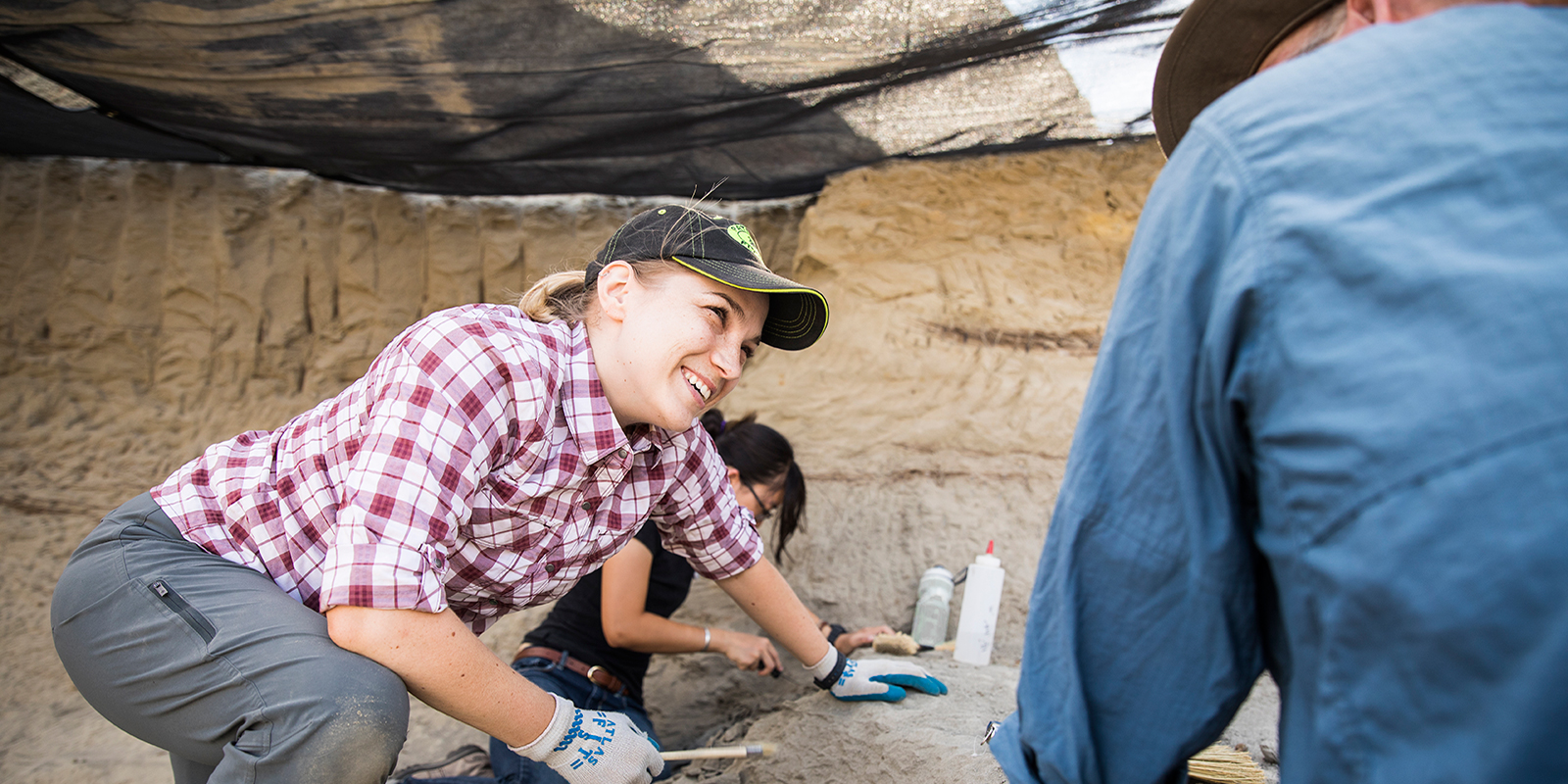 Digging for fossils is painstaking work. While powerful equipment like excavators and jackhammers can help, most days at the T. rex site were spent carefully removing small sections of dirt one chisel-stroke at a time, hoping to reveal bone.

Many crew members are volunteers—undergraduate and graduate students at the UW, teachers on summer vacation, amateur paleontologists—who brave the scorching heat and cheerfully take on even mundane work, like trucking wheelbarrow loads of loose dirt from one spot to another, and pass the time talking about their favorite Star Trek episodes.

This is going to be one of the most complete T. rex specimens in the world. And it’s gorgeous in terms of its preservation. 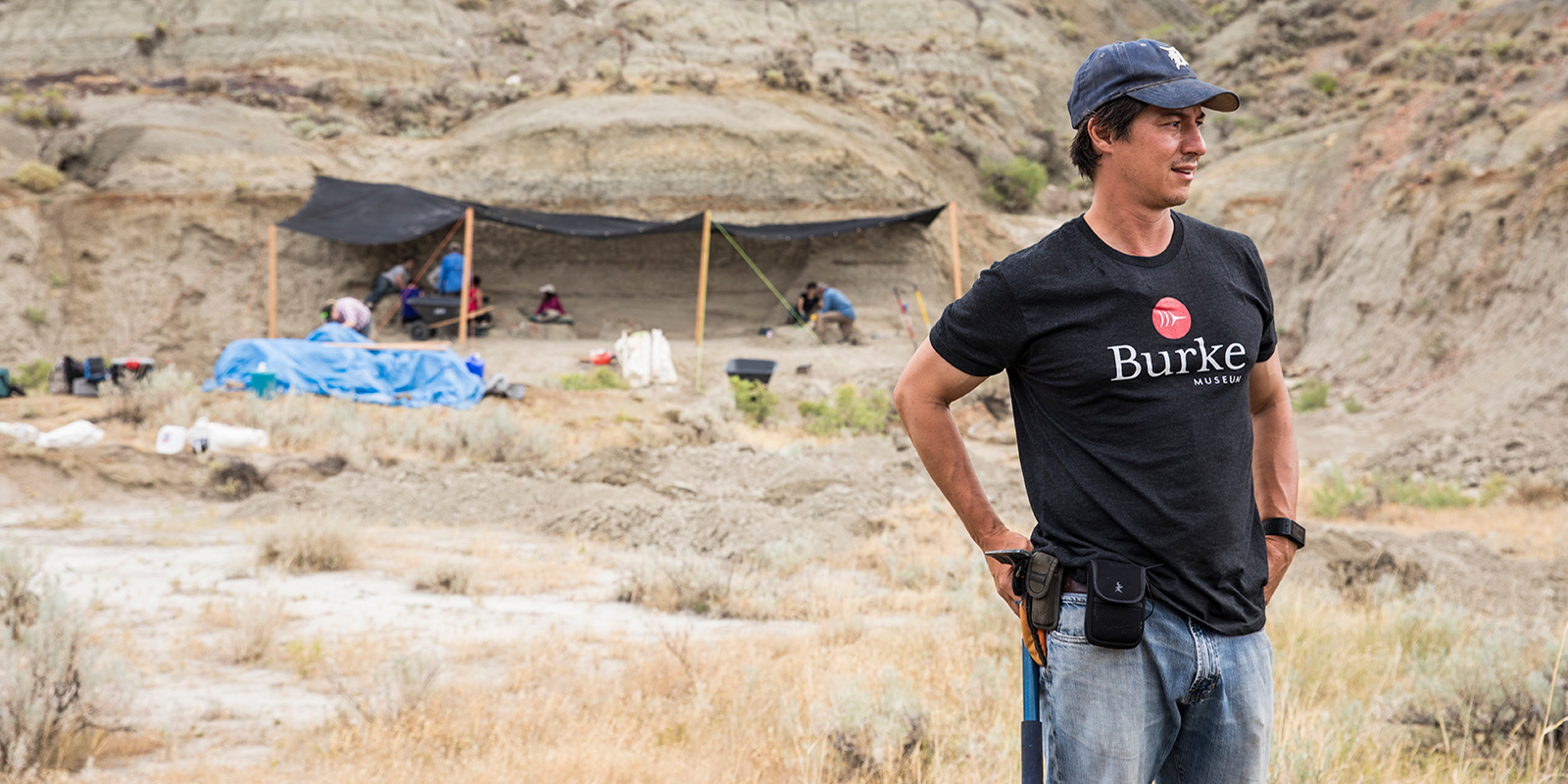 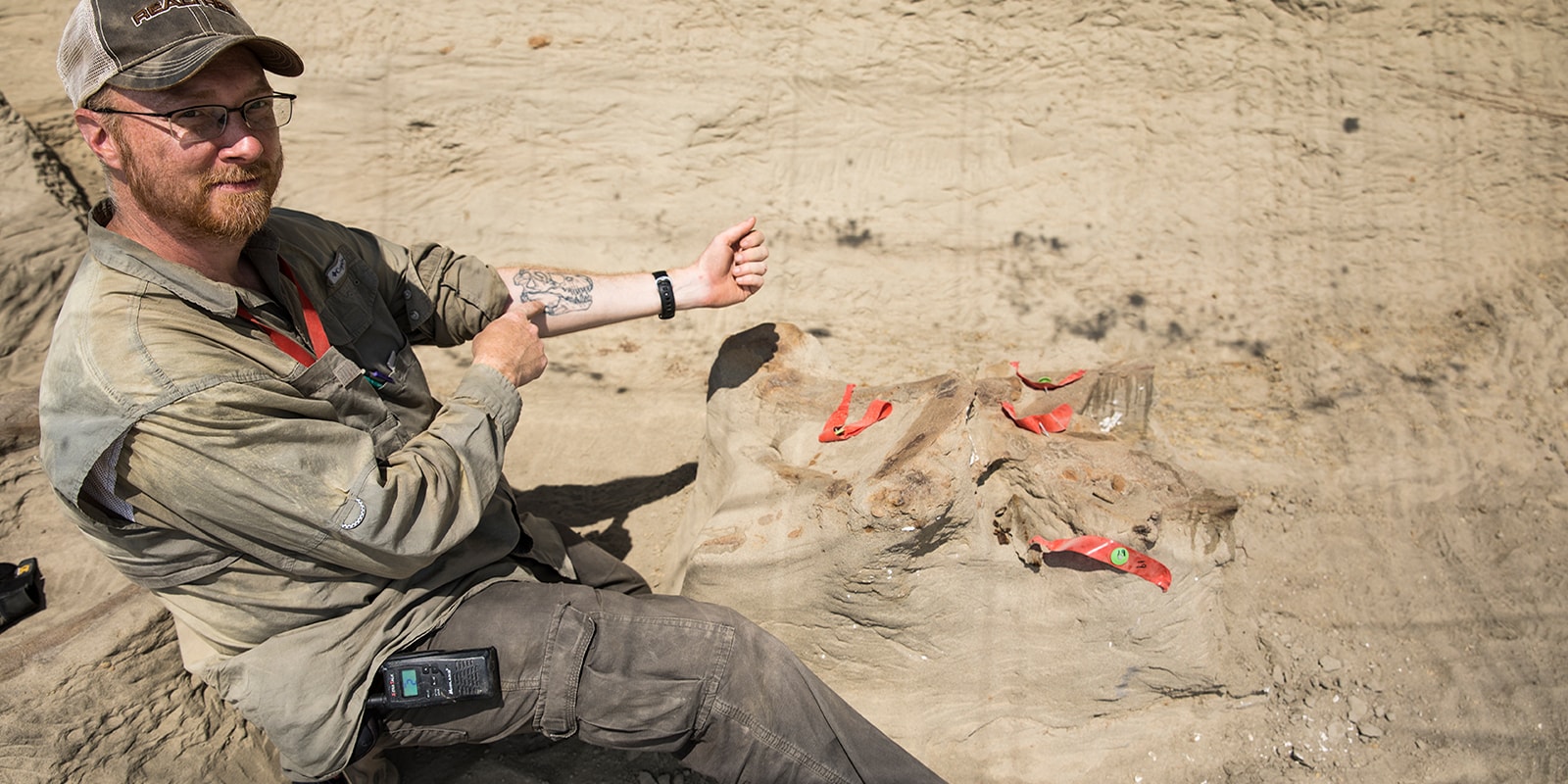 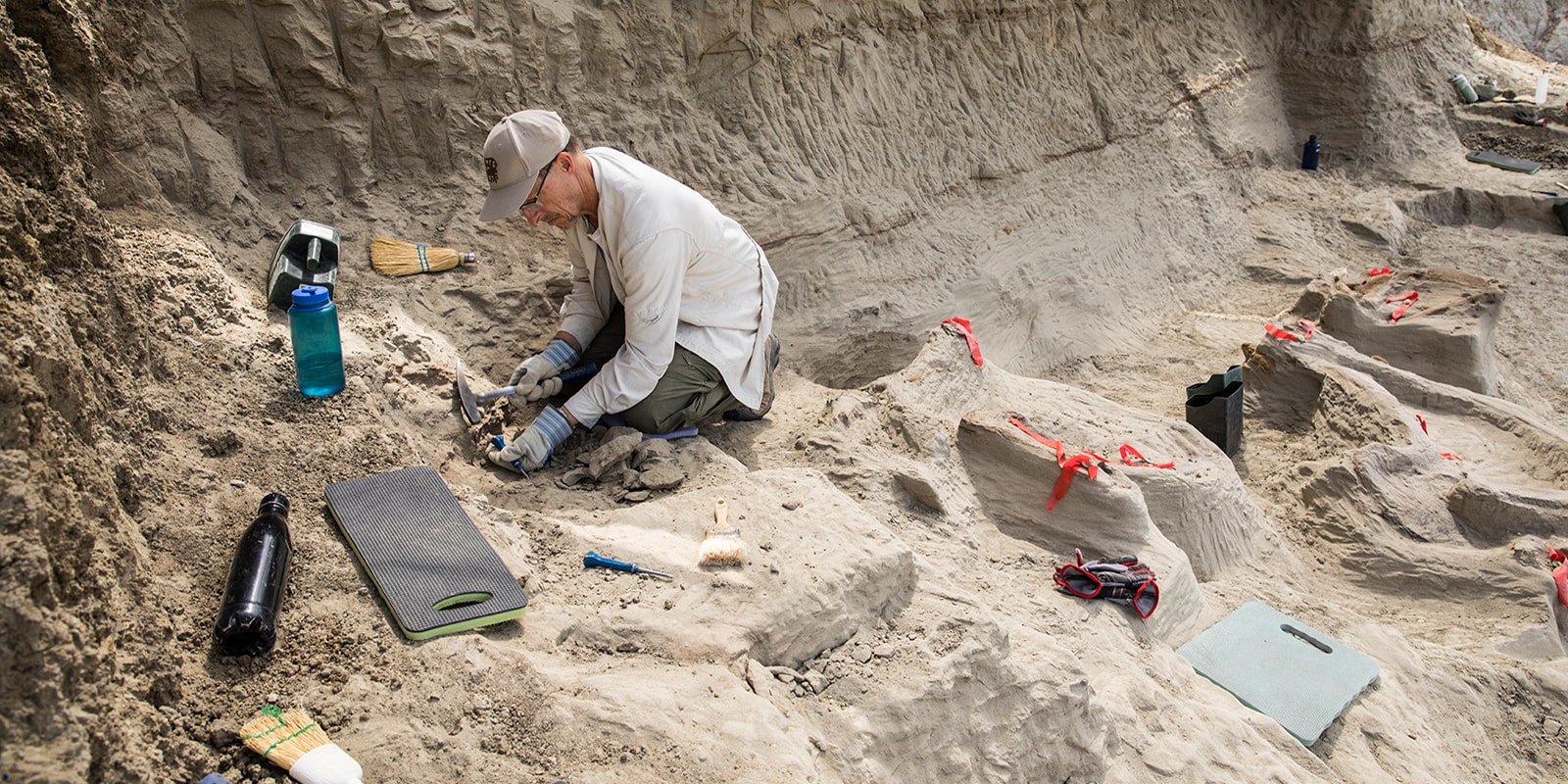 Their patience paid off when they found several new fossils this year: the rear portion of the jaw bone found last summer, a scapula (shoulder blade), more ribs (including the rounded gastralia or “belly rib” bones). 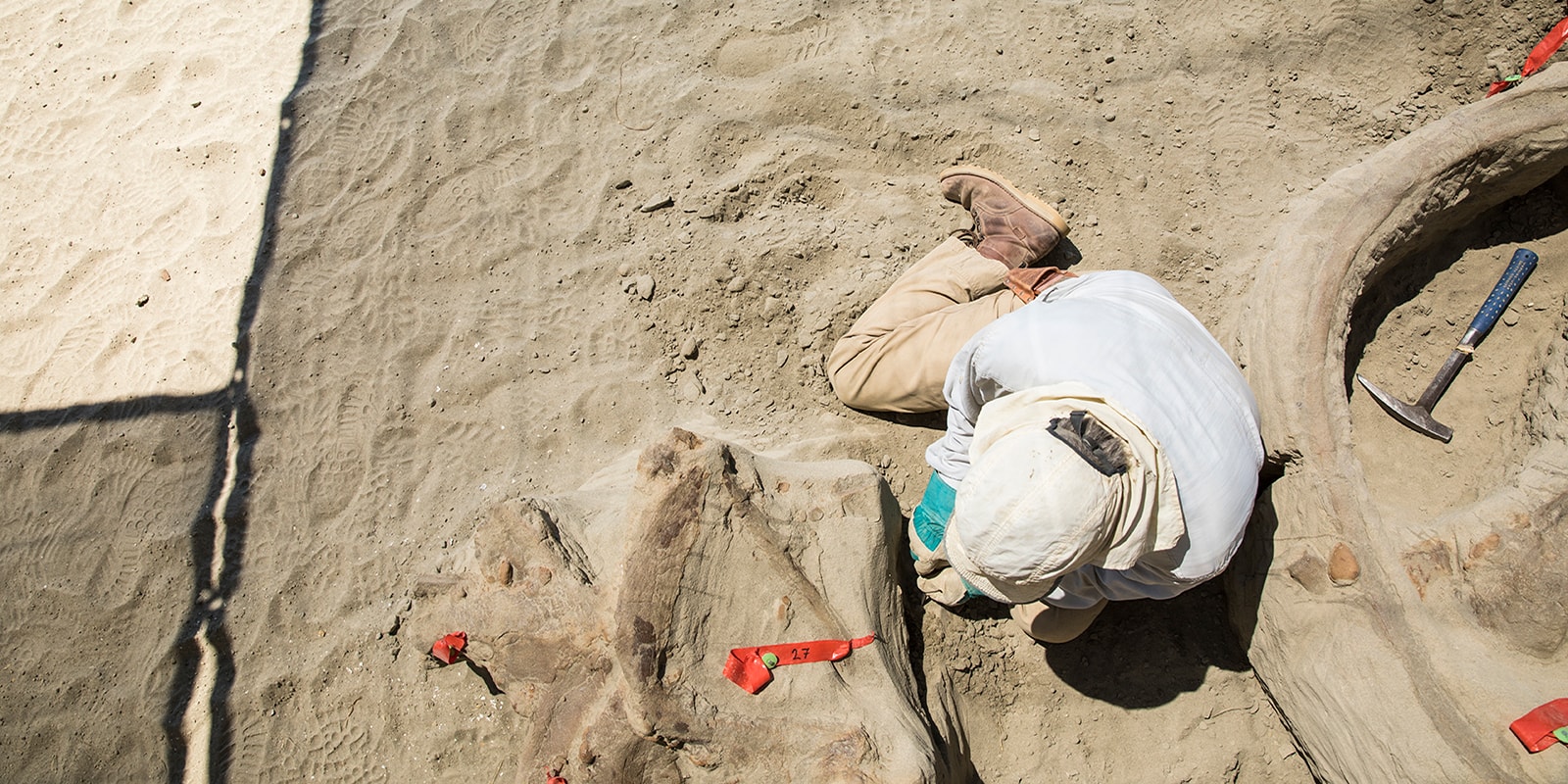 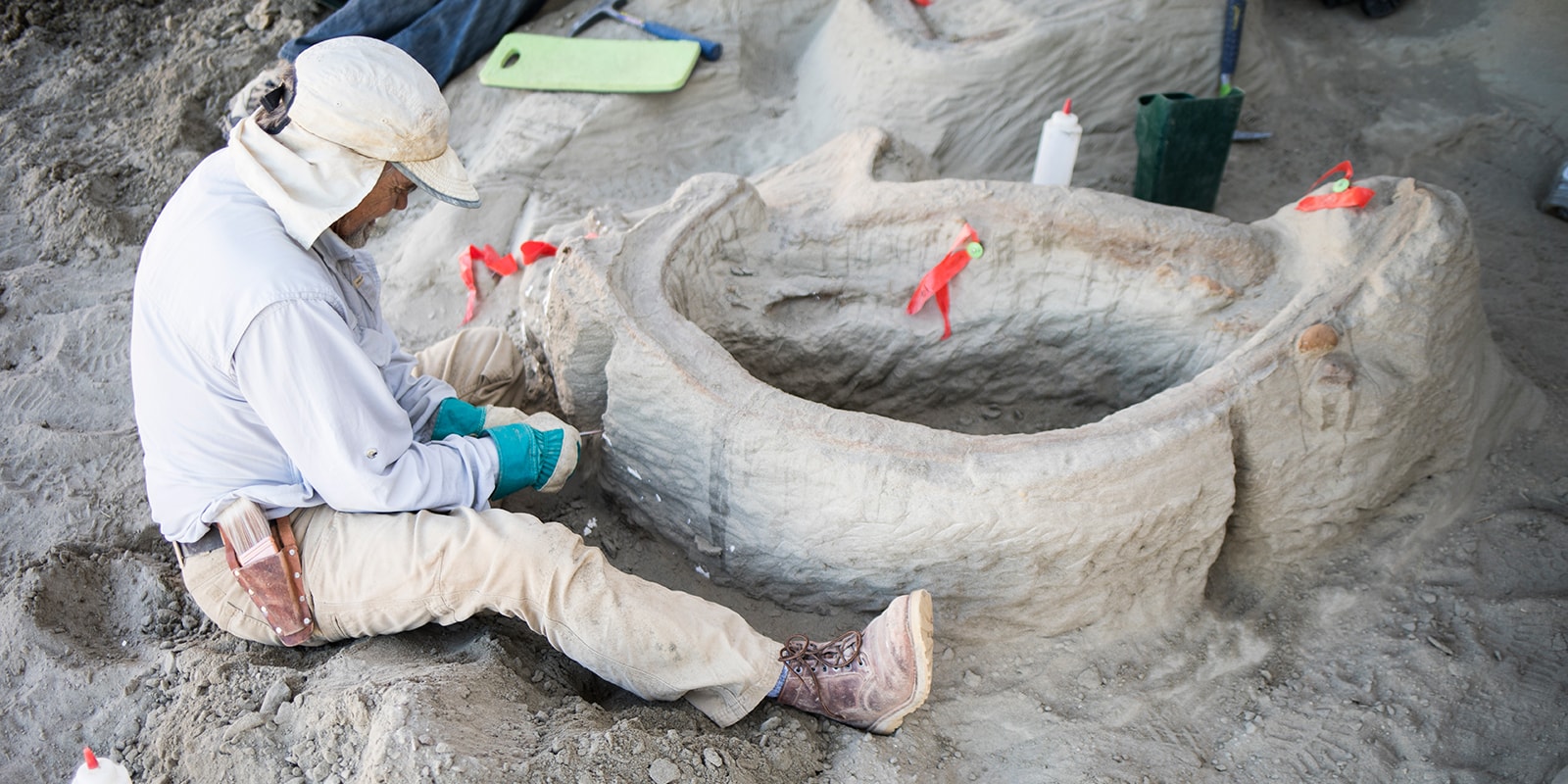 While it can’t be confirmed until the fossil is prepared, the team is relatively certain they also found a humerus (the long arm bone that connects the shoulder to the elbow). The T. rex humerus is not much larger than the average human’s. Jokes made at the expense of T. rex’s small arms are not in short supply, but it’s fascinating to see such stark evidence that an animal that stood 40 feet at the hip and stretched the length of a city bus had such (relatively) puny arms.

The location of the bones in relation to each other suggests that the “Tufts-Love” T. rex may have died curled up counter-clockwise from head to tail, but it’s not possible to determine exactly how the animal died. Preparation of the jaw bone excavated last summer revealed bite marks that could be from battles with other T. rex, but they show evidence of healing, so don’t appear to be a cause of death.

“This is going to be one of the most complete T. rex specimens in the world. And it’s gorgeous in terms of its preservation—the bone is spectacular,” said Wilson. “I’m super excited to be able to bring this to the Burke, the Pacific Northwest and the University of Washington.”

Wilson leads a large, multidisciplinary team that studies geology and fossils in the Hell Creek Formation to learn more about the period of time immediately before and after the mass-extinction event that killed off the dinosaurs and gave rise to the age of mammals, 66 million years ago. 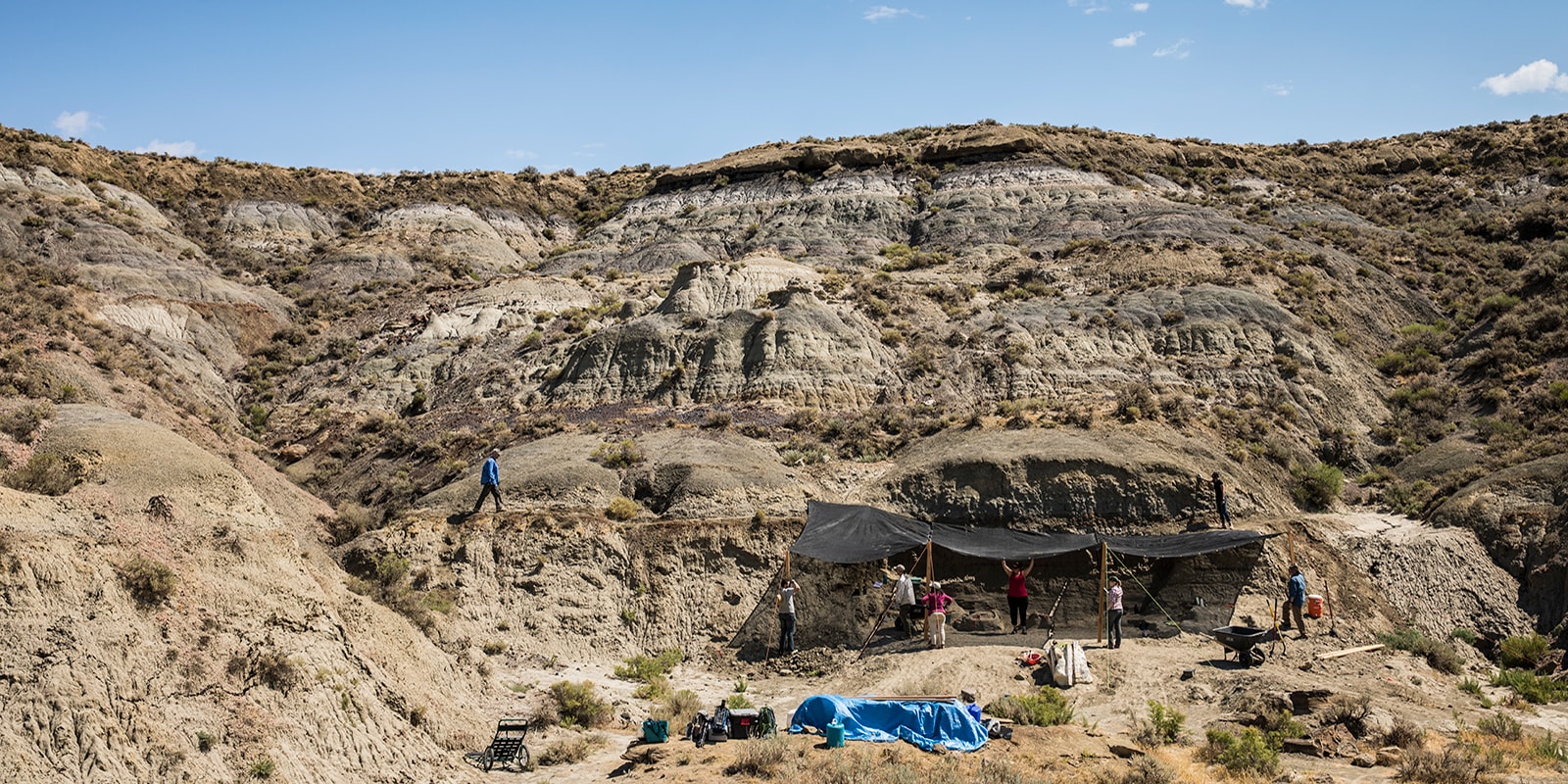 The K-Pg Boundary, which marks the mass extinction event that ended the age of dinosaurs, is the dark line of sediment visible just below the overhang at the top of the hill. 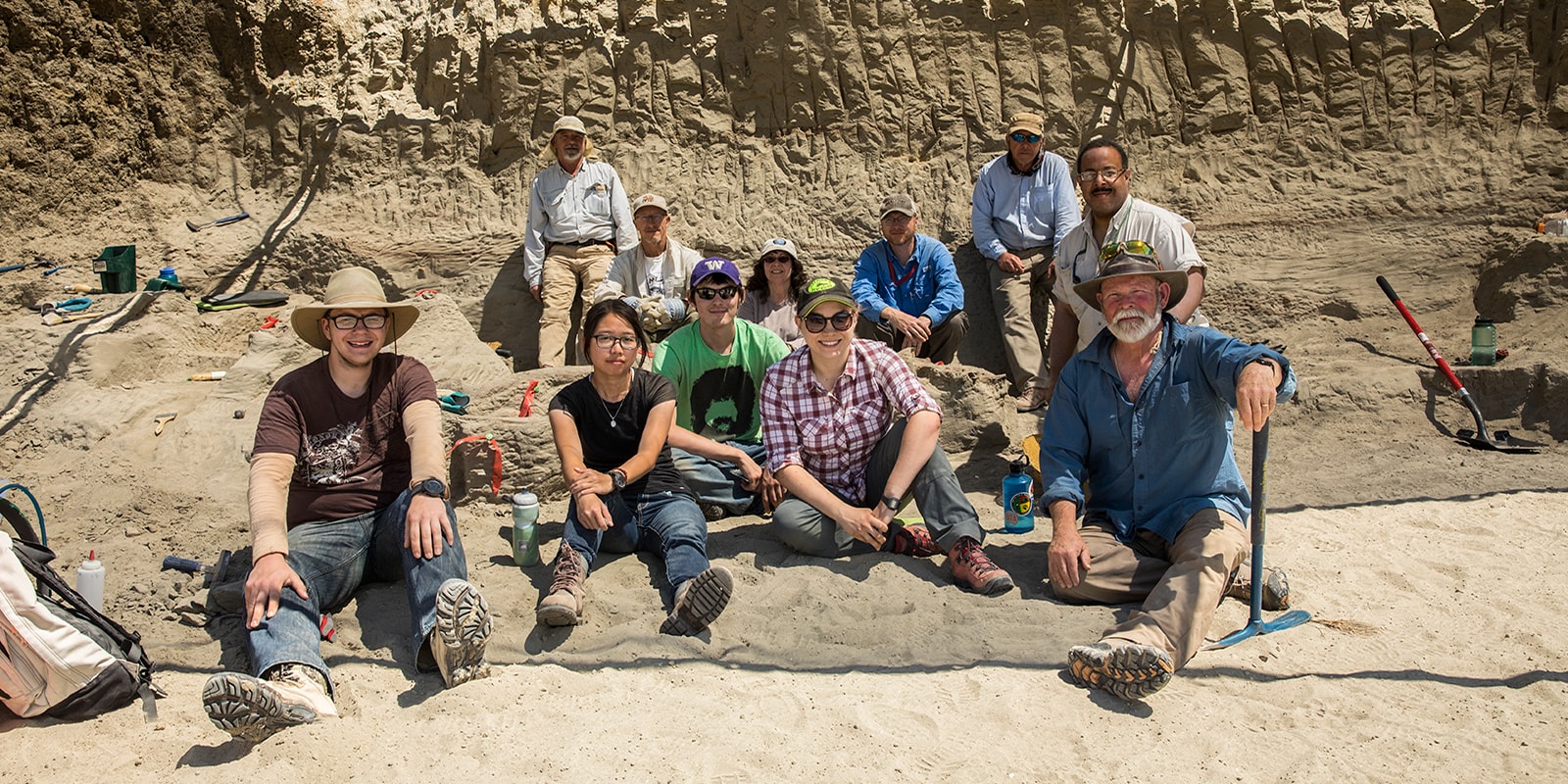 The K–Pg boundary—a black layer of sediment visible in the hill just above the T. rex dig site—clearly delineates the end of the age of dinosaurs.

“The more specimens that we have, the more we get to understand about this top predator and this ecosystem that was the last of its kind in the world,” said Wilson.

The T. rex crew thinks they’ve found everything there is to find at the site, but work on these specimens is just beginning. Before they can be studied, rock and dirt must be removed, and the fossils must be preserved.

The public can watch preparation of the magnificent T. rex skull LIVE at the Burke beginning August 12, 2017. More and more will be revealed each day, so come back often to see the progress!

All fieldwork was done with Bureau of Land Management (BLM) permits to research and collect on federal land. 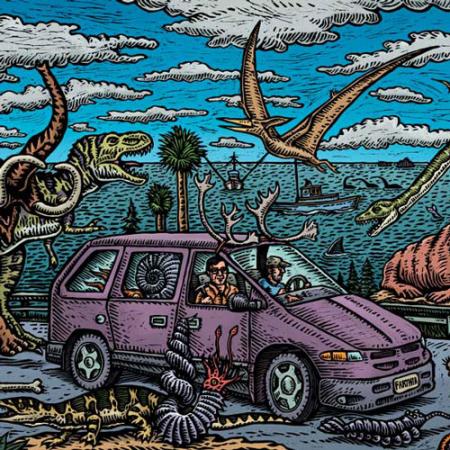 Travel virtually to Ketchikan, Alaska and meet Ray Troll, the artist behind our new exhibit Cruisin’ the Fossil Coastline!