Wildlife ecology and drawing might not seem like they go hand-in-hand, but many of the most renowned early naturalists were also skilled artists. It was all part of the job in a world without easily portable cameras. Illustration was, and still is, a powerful tool to share biological discoveries with the world. You can read a description of the Blue-footed Booby all day and never fully visualize what these famously strange looking birds look like until you see them depicted by an artist.

Simone Des Roches, a Postdoctoral Fellow in the UW School of Aquatic and Fisheries Sciences, uses her deep understanding of biology to inform her illustrations. Working with Burke Museum Curator of Genetic Resources & Herpetology Adam Leaché, she's producing a series of biological illustrations depicting the Herptiles of Washington State that focuses not only on the difference between species, but the diversity within a species. 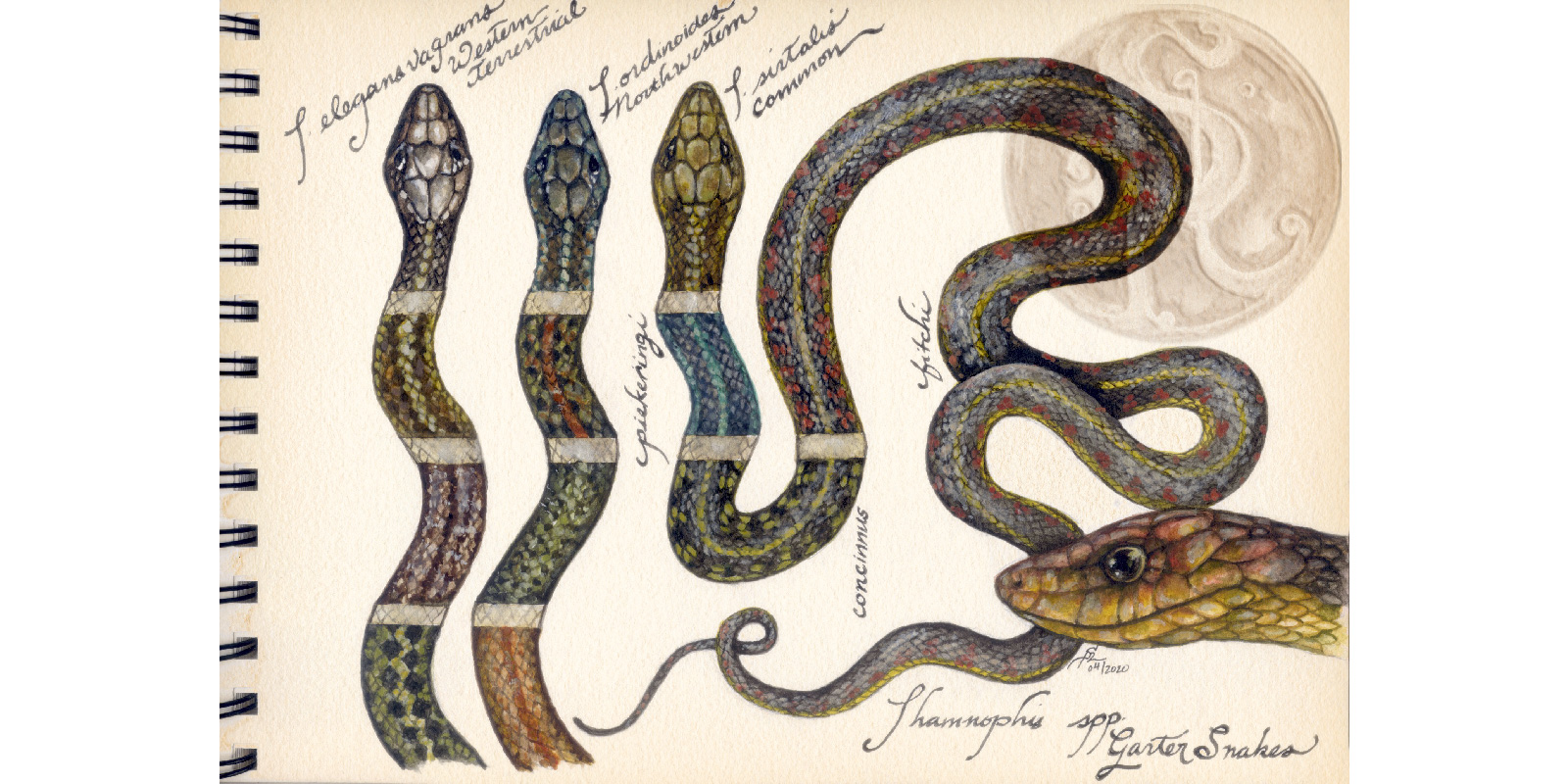 These illustrations of the three garter snakes native to Washington state show not only differences between the species, but also the many variations of color within those species. 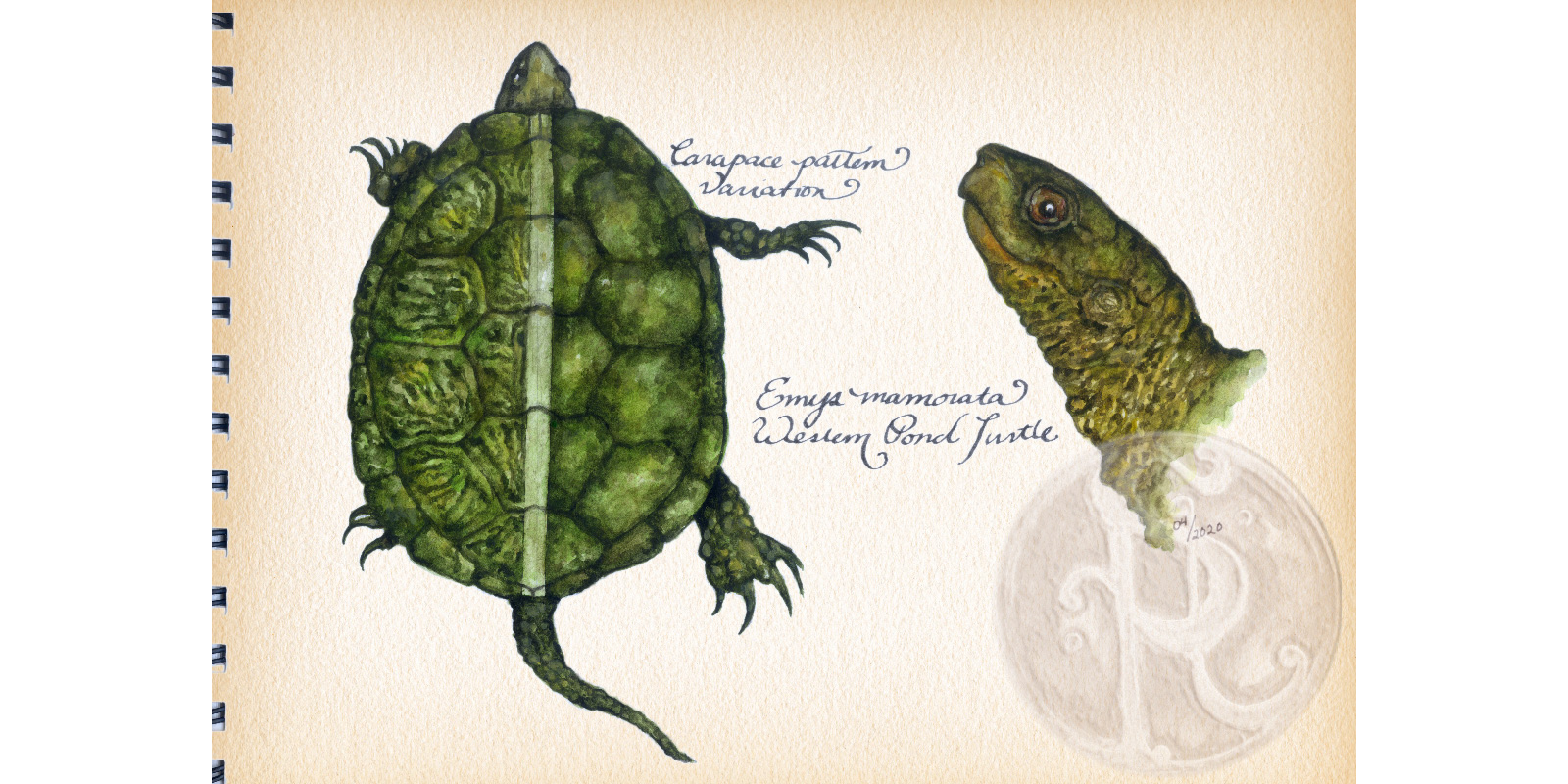 My interest in drawing goes way, way back. I’ve always drawn, ever since I could pick up a pencil and make a mark on paper. I’ve also always been interested in the natural world since I was a young girl. Eventually, when I went to choose a major, I was really interested in art and really interested in biology, but I had to pick. So I chose to go into Biology professionally and promised to myself  to keep doing art as I went through undergrad.

I’ve also always been really interested in drawing mythical creatures. I like to make these creatures as “biologically accurate as possible”. So in that sense, art and biology have always gone hand in hand for me. As for my style, I’ve always loved the “classical illustration” techniques - watercolour and pen and ink. Even my mythical illustrations have always had this aesthetic.

What are some of your favorite research projects you’ve worked on and what kind of environments did they take you to?

My PhD was all on lizards in White Sands, New Mexico so that’s the one that is closest to my heart. There I was studying these three species that are all white on the white sand dunes and comparing them to their dark colored conspecifics that live outside the dunes. So I asked what made the white and dark lizards different from one another besides just their coloration. How did their ecology differ, did they eat different things and use their habitats differently? Turns out, yes in all cases! So that system is really close to my heart, and it really represents this intersection between ecology and evolution in these species that are evolving rapidly or are in novel environments.

That was in the desert, but I’ve done field research in a ton of different ecosystems. So now I’m doing work in intertidal areas, whereas my last postdoc was on stickleback fish evolving in response to climate change in estuaries in California. It’s kind of funny that my fieldwork has mostly taken place in the desert and aquatic ecosystems, which are pretty opposite! 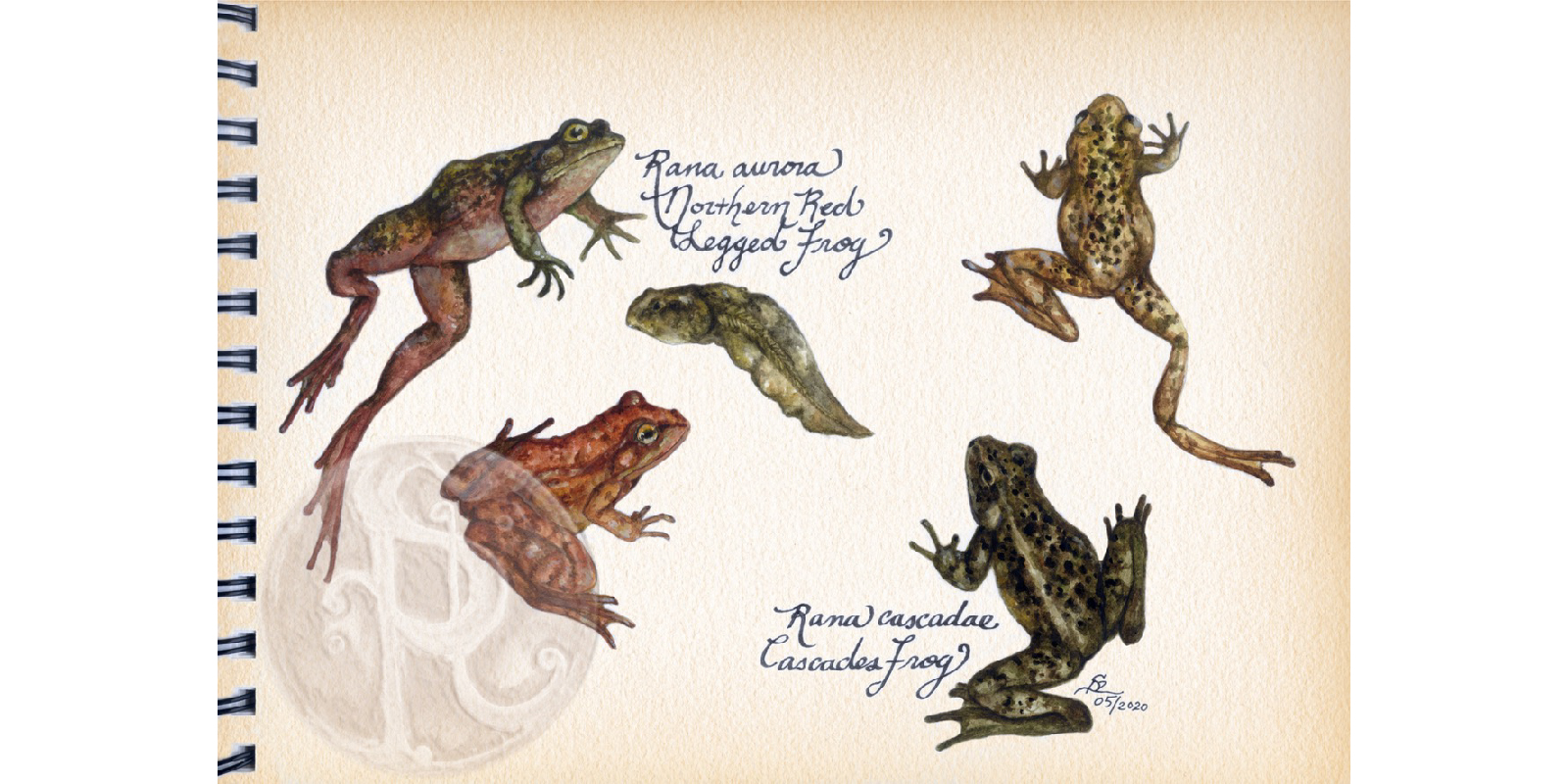 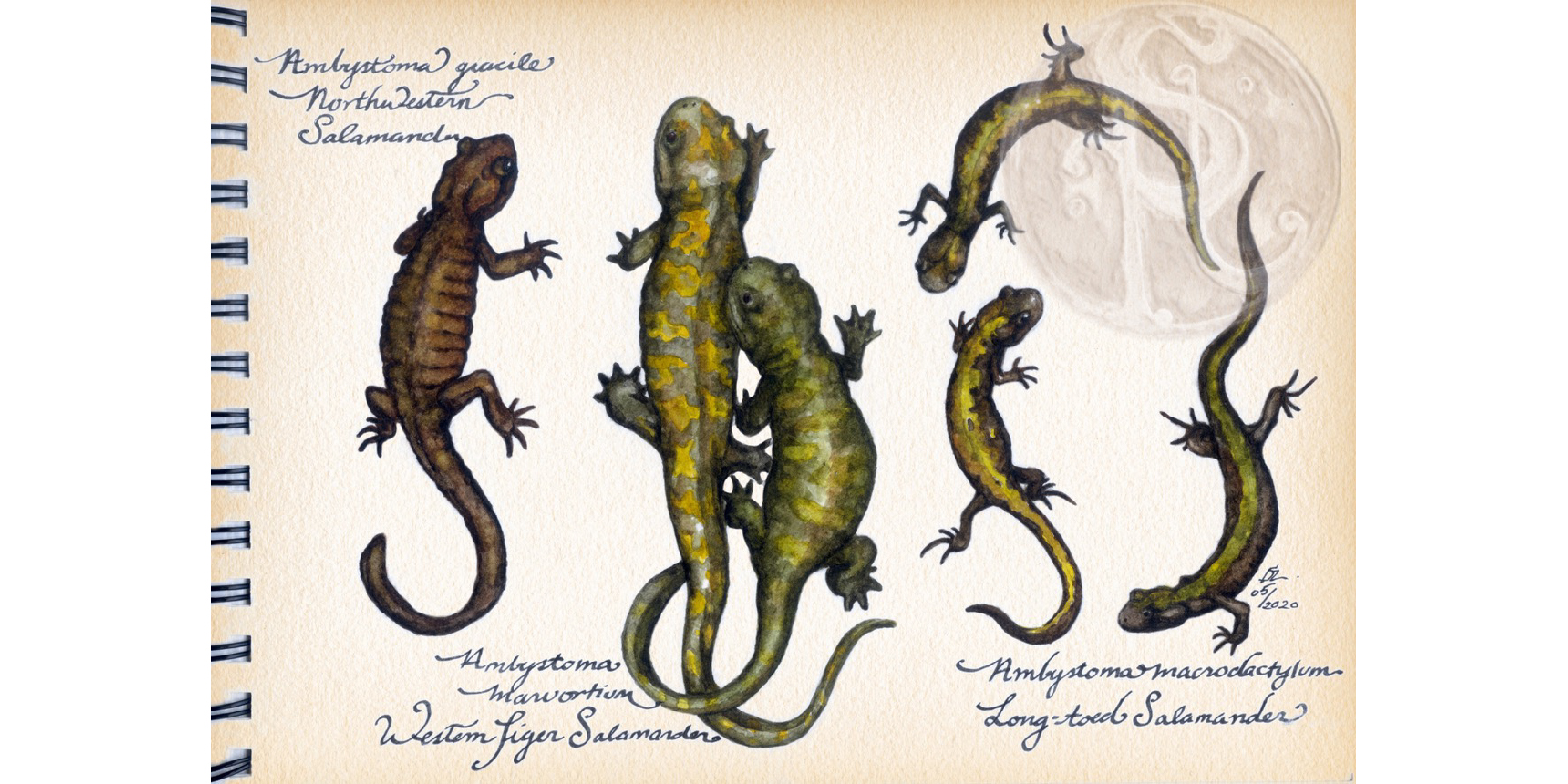 Much of your research focuses on variation within a species and how a population might adapt to the world around them. Do you like showcasing these themes in your illustrations?

While illustrating the Herps of Cascadia, I really want to emphasize that variation within species. I wanted to showcase diversity beyond what you see for a species in a reference manual or a field guide, which often show one or two different morphs. I wanted to explore the color, and pattern diversity. I think this is where my research interests come in–centering on this intersection between ecology and evolution and how intraspecific variation (variation within a species) is really a crucial component of that intersection. That variation, that diversity within species has really been the inspiration behind the herp illustrations.

Do your illustrations ever accompany your research?

My most recent paper was the first paper where I used my watercolor illustrations in the figures, and I want to do that a lot more! People seemed really excited about it. That paper was on stickleback fish and looking at their evolution as a result of climate change in California. I think one of the things it seemed to do was get people interested in the research. Personally, I get really excited about data visualizations and concepts in papers, so I kind of pride myself on figuring out how to do that.

I think having the artistic component layered on top of science can be really gripping for people. Hopefully they see the figures and are excited to open the paper and look at the results. Visualizations and science art are great avenues for outreach too because you get people interested in not only the beauty of nature, but also in the beauty of someone’s interpretation of nature.

There is a long history of wildlife biologists and naturalists using illustration to record the world around them. Do you have any artists that you draw inspiration from?

One of the things that I think is a bit of a tragedy is that you always know papers’ authors, but you don’t often know the biological illustrators. I often find myself really appreciating illustrations themselves. I recently found this book, “Explorers Sketchbook: The Art of Discovery & Nature” that showcases different explorers and their illustrations. I even found a few female historical naturalist-illustrators, which seems to have been pretty rare.

One I am especially drawn to is Maria Sibylla Merian. She did this really famous illustration which I've seen around before and I didn’t realize was done by a woman back in the 1600s. It has been really cool learning a little bit more about this tie between natural history and biological illustration and how that was so closely intertwined for the early explorers and early naturalists.

What would you say to someone who might be interested in trying their hand at animal illustrations? What’s the best place to start?

One of the things that I’ve found really helpful is to look at the skeletons of animals and to see how they fit together and how they work though I’ve never really done that in a structured or disciplined way. For me, being interested in the natural world and how things move and work has always been really helpful for me. For this series in particular, I actually get a lot of inspiration from iNaturalist! I look at all the photos and records of herps in Washington, making note of their variation in patterns and color - so if you have logged a herp photo to iNaturalist, there’s a good chance I’ve used it as reference material!

For somebody who is just getting into illustration, I would suggest finding other illustrators for inspiration. Also just spending time in nature and trying to draw things just by observing them. Still, a lot of my illustrations are referenced from either my own photographs or from different photos online, which might be cheating in a way, but I think of it as a natural progression of photographic art being translated into illustration art!

Want to try drawing Washington's wildlife? Check out our tutorials!

Video Caption: This series with local artist Jed Dunkerley will take you through Washington's six major ecosystems and teach you how to draw some fo the most iconic plants and animals that live there. It's a great first step for anyone who wants to try out biological illustrations and even the pros might learn a thing or two!