Pacific Voices legacy lives on at the New Burke

When the current Burke Museum facility closes on December 30, 2018, there will be silence in the Pacific Voices gallery. 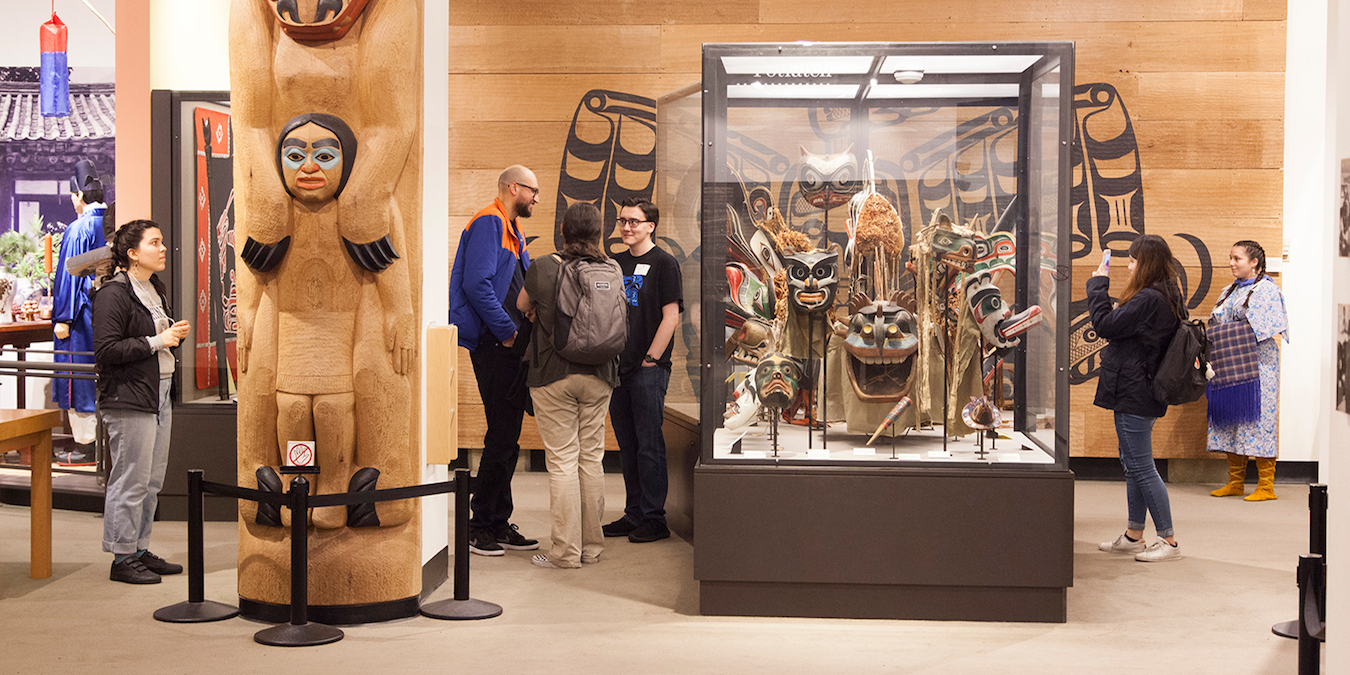 Visitors and volunteer interpreters at the 20 Years of Pacific Voices Celebration on November 1, 2018.

And it’s never really been quiet in the Pacific Voices gallery.

On any given day, visitors of all ages, all ethnicities—all everything—wander the exhibits, registering delight at the playful expression on the face of the giant Tlingit-carved sea lion, wondering aloud if the Korean wedding food on display is real, wishing they could try their hand with the Indonesian shadow puppets. Typically, the noise level hovers around a low museum-voice murmur, punctuated by occasional excited and intrigued exclamations 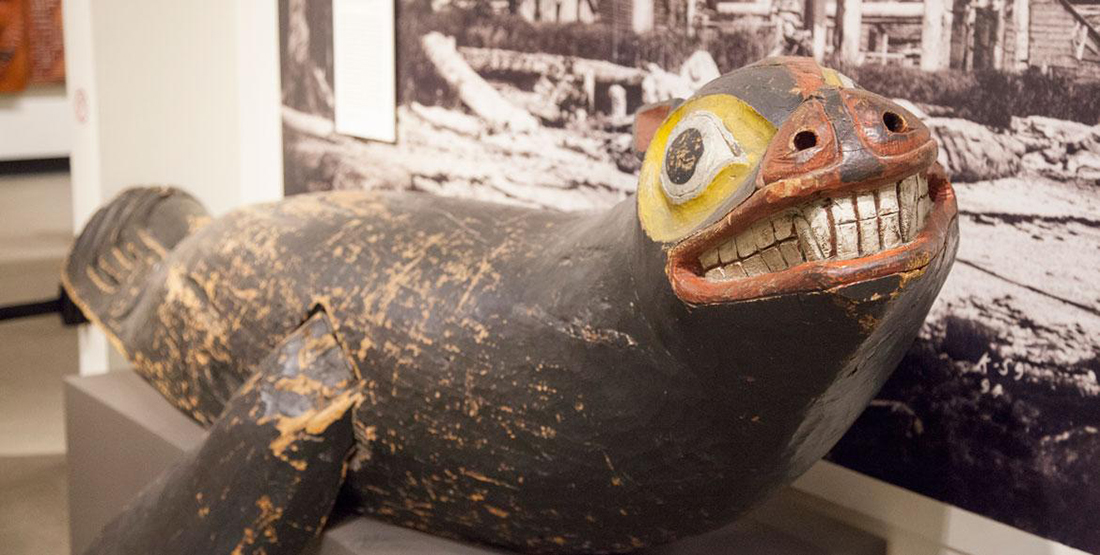 Display in the Pacific Voices gallery. 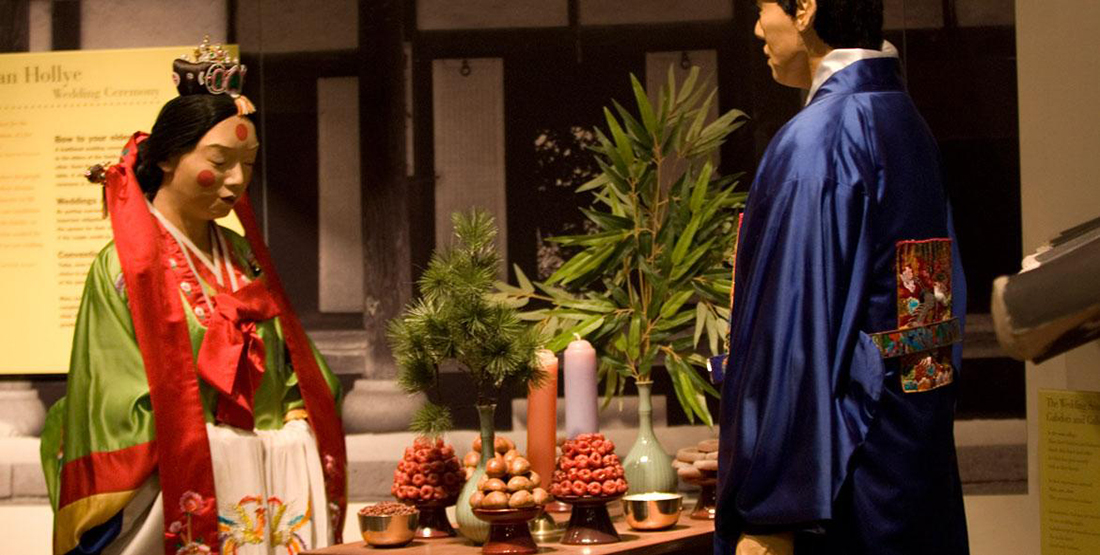 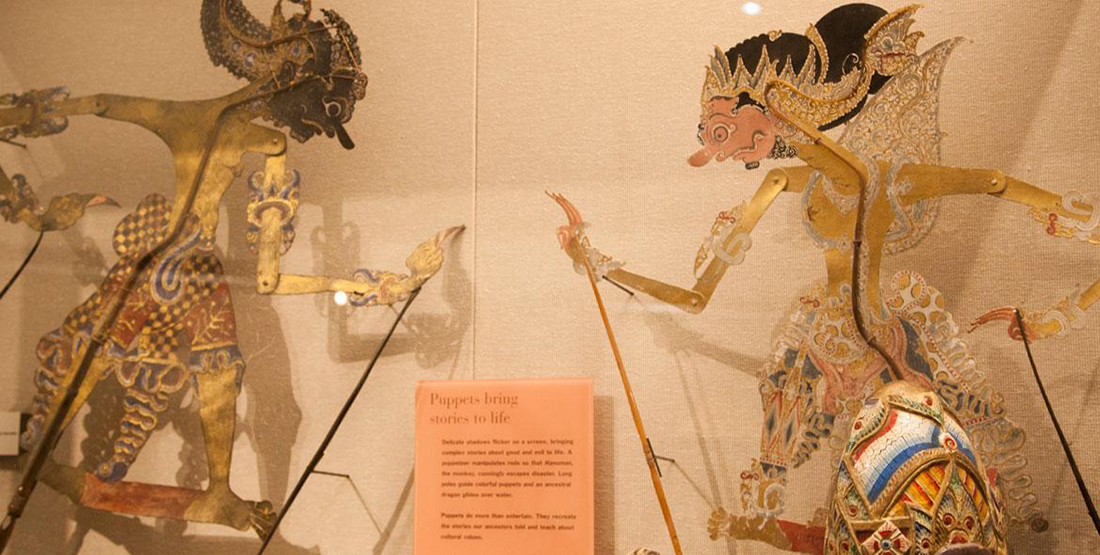 Even when the gallery is empty, it’s not quiet. Multimedia features scattered throughout the exhibit add context and deepen the human connection with voices on screens and recordings. A storytellers display invites listeners to join a Northwest Coast potlatch. A video presentation by Northwest Native artists explores the enduring power of the totem pole. University of Washington (UW) students share the personal histories that transform their tattoos into their heritage.

Listening closely, beyond the live and recorded human voices, visitors to the Pacific Voices gallery can hear something else: the silent but unmistakable sound of communities asserting their existence and their vitality, in response to a museum culture that has often positioned itself as the authority in telling stories through cultural pieces.

A revolutionary approach to museum exhibit development, Pacific Voices placed control squarely in the hands of the people whose stories were being told.

A revolutionary approach to museum exhibit development, Pacific Voices placed control squarely in the hands of the people whose stories were being told. 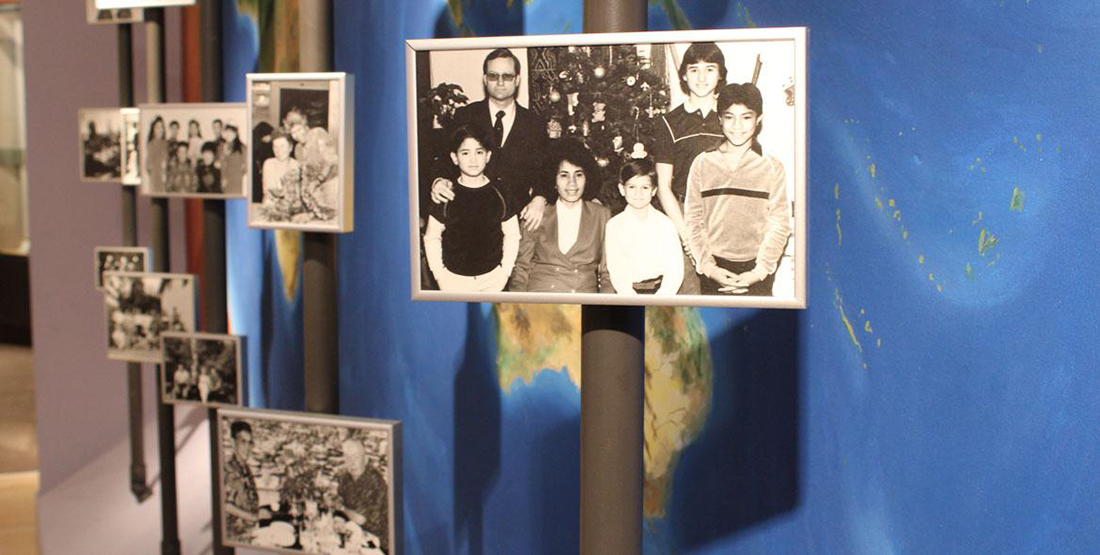 Family photographs line the entrance to the Pacific Voices gallery.

More than twenty years ago, a group of leaders (the Community Advisory Board) living in and around the Puget Sound area, with strong ties to their Oceanic and Native Northwest heritages, came together with a purpose: working with Burke Museum staff, including Project Manager Erin Younger, former Curator of Native Art Robin Wright, and current Burke Executive Director Julie K. Stein, they set out to design a new kind of museum exhibit.

From its inception, Pacific Voices was meant to revitalize the public’s notion of these Pacific Northwest and Oceanic communities, to reveal them as vibrant, active, and thriving—not frozen in time, but rather “continually adapting . . . reaching deep into the past in order to guide their children towards the future,” as noted by the exhibit’s original curator-in-charge, Miriam Kahn.

In the end, they created an exhibit organized around the things their cultures have in common, and the ways in which cross-cultural themes build identity in individual communities. These themes included Languages and Stories, Teachers and Ancestors, and Ceremonies. They selected objects from the Burke’s collection to illustrate their stories, and commissioned new items if appropriate ones weren’t available.

The advisory board’s life experiences and understanding of their cultural heritage are woven through each of the exhibit’s storylines, conferring every element of Pacific Voices with authenticity and power, and infusing the displays with joy. 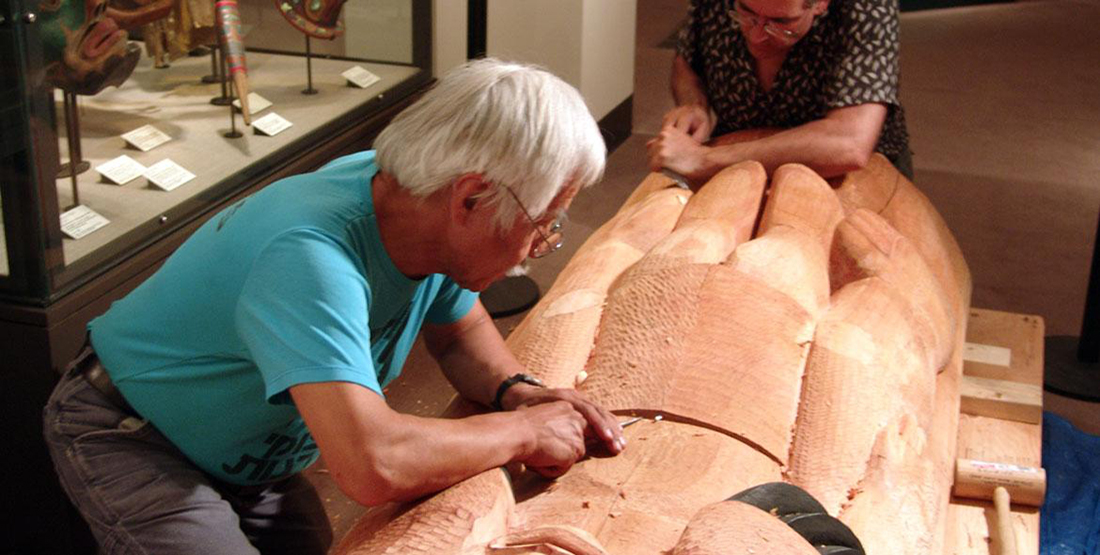 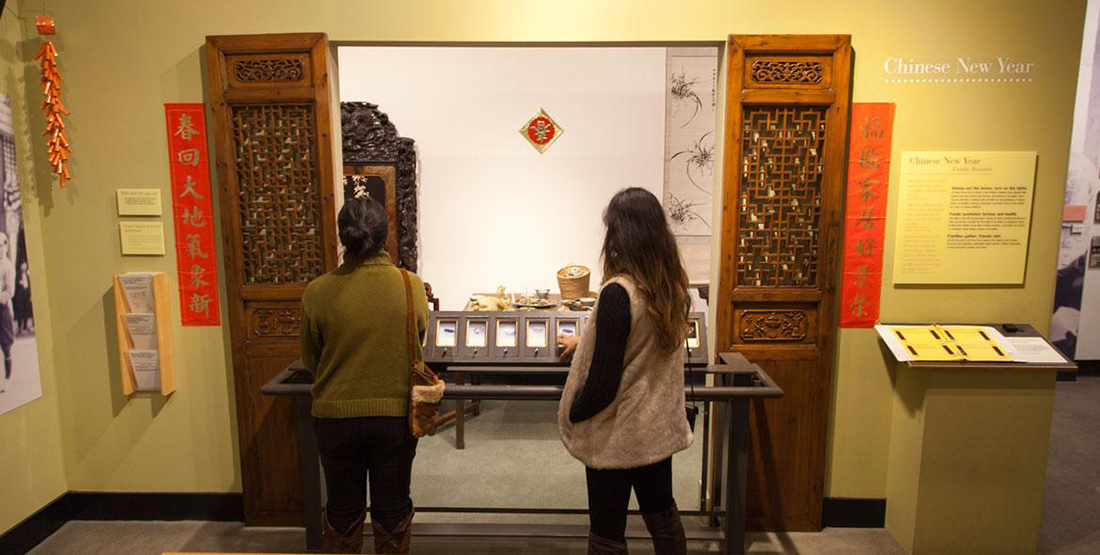 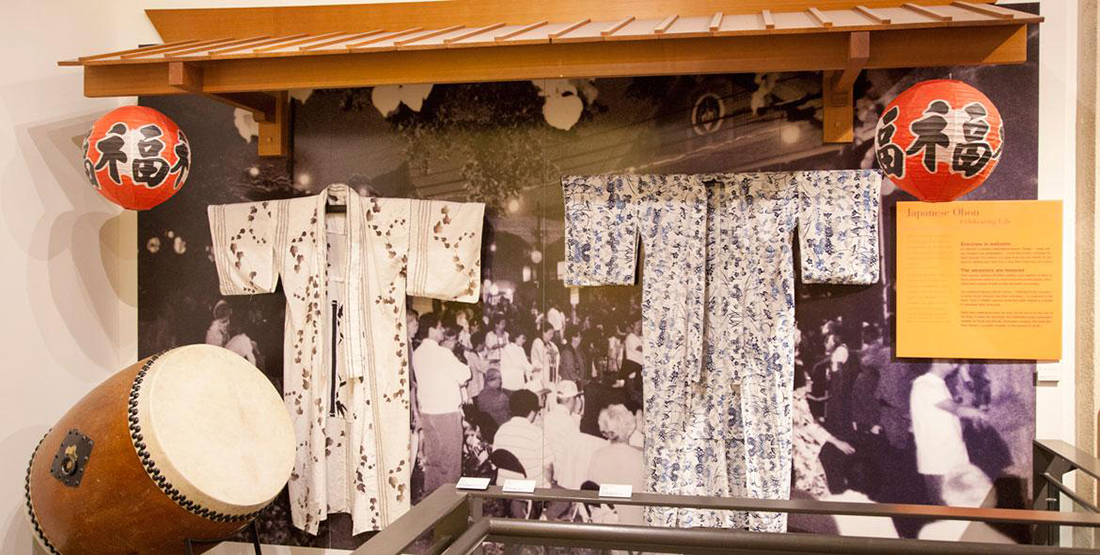 Along the way, this work reinvigorated the idea of the museum itself. Instead of a collection of objects sitting stagnant on shelves, Pacific Voices speaks in the present tense, and like the cultures themselves, has continued to change and grow over the years.

In a recent video addition to the gallery, “Wearing Cultural and Family Pride: The Significance of Polynesian Tattoos,” UW students of Polynesian descent show their elaborate tattoos and talk about the family stories that animate the designs.

Elsewhere in the space, UW student research enabled the creation of a new Pacific Voices display, one featuring a house post that was added to the Burke’s collections in 2015. 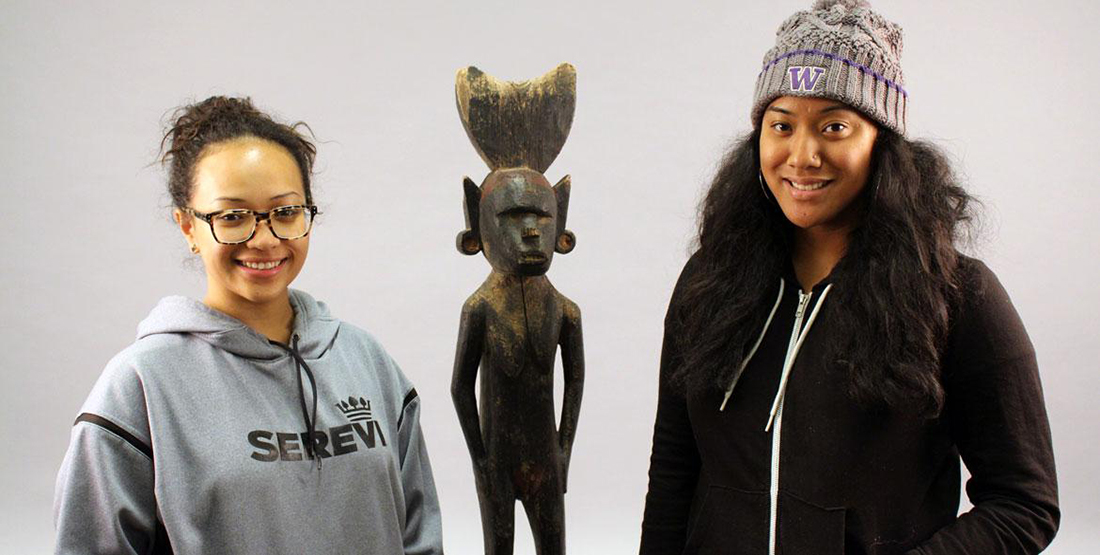 Students Latu and Suli Aho were part of a UW all-female Pacific Islanders research class when they researched the Shark God Canoe House Post from the Eastern Solomon Islands.

The closing of the Pacific Voices exhibit will be bittersweet, involving as it must the removal of a signature Burke exhibit, one telling a specific set of stories that has meant so much to many people, and that has been a constant for a generation of Burke goers.

The good news is that Pacific Voices has permanently changed curation at the Burke. The exhibit is closing in part due to preparations being made for the fall 2019 opening of the New Burke, where the exhibit design and program planning practices tested in Pacific Voices will become the approach used throughout the museum and will be extended to include the input of all of the communities represented in Burke collections.

Soon, the New Burke will be a home for these Pacific voices and so many more. And as the Washington State Museum of Natural History and Culture, the Burke has assumed a leadership role in this area, as museums around the state and the around the country look to community-led curation as a model for their own cultural displays.

Though each of our cultures is different, we all draw a sense of identity from our languages and stories, teachers, and ceremonies. These shape our cultures, cultures that live on through our children, and through others that we touch. Farewell, and thank you for listening to our voices.

Sumathi Raghavan is the Manager of Corporate and Foundation Relations at the Burke Museum.