Fossil whale on display at Burke Museum is new species

The 27-million-year-old fossil whale on display in our Life & Times exhibit is officially a new species! It represents an early species of baleen whale from a stage in the group’s evolutionary history when baleen whales transitioned from having teeth to filtering food with baleen bristles.

Visiting researcher Carlos Mauricio Peredo studied the whale—found in 1993 on the Olympic Peninsula—during his visit to the Burke last August. His research and the new species' name, Sitsqwayk* (pronounced sits-quake) cornishorum, were published last week. 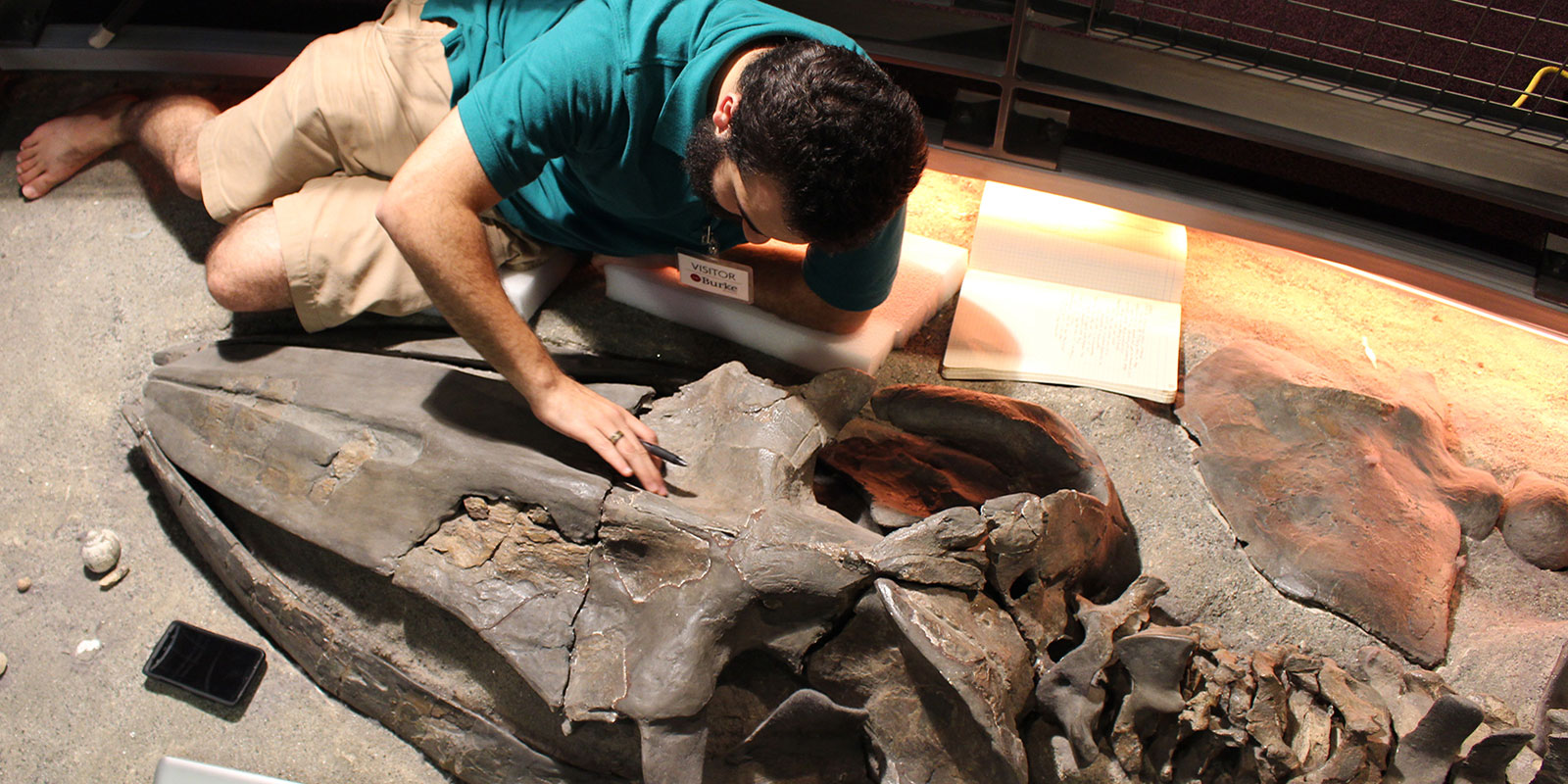 “The earliest baleen whales clearly had teeth, and clearly still used them,” said Carlos. “Modern baleen whales have no teeth, and have instead evolved baleen plates for filter feeding.” So when did this evolutionary change occur and what factors might have caused it?

Traditionally, paleontologists have sought answers about the evolution of baleen whales by turning to two extinct groups: the aetiocetids and the eomysticetids.

“The aetiocetids are small baleen whales that still have teeth, but they are very small, and it remains uncertain whether or not they used their teeth,” said Carlos. “In contrast, the eomysticetids, are about the size of an adult Minke Whale, and they seem to have been much more akin to modern baleen whales; though it’s not certain if they had baleen.” Baleen typically doesn’t preserve in the fossil record because it is a soft tissue; generally only hard tissue (e.g., bones, teeth) are fossilized.

Previously, there were no other species confirmed to have lived in the gap period between aetiocetids and eomysticetids. “Sitsqwayk is unique in that it represents the first known specimen of something in between,” said Carlos. “It has enough primitive traits to clearly place it as more primitive than the eomysticetids, but it’s much larger than the aetiocetids and it almost certainly did not have any teeth at all.”

Carlos is also researching another whale specimen at the Smithsonian Museum of Natural History in Washington DC that is similar to Sitsqwayk but may represent yet another species. “These kind of specimens are really crucial for understanding exactly what kind of environmental pressures were driving the disuse of (and eventual loss of) teeth and subsequently the evolution of baleen,” said Carlos.

“The more we are able to discover and study this group, the more likely we are to answer some of the key questions surrounding what makes baleen whales as we know and love them today” he said.

We're thrilled that Carlos' research has given new insights—and a new name—to the beloved whale specimen on display at the Burke.

*The name ”Sitsqwayk" is a Klallam word for a powerful spirit from far out in the water said to bring wealth. It selected and used with permission from elders of the Lower Elwha Klallam Tribe.

Carlos Mauricio Peredo is a doctoral student at George Mason University and research associate at the Smithsonian National Museum of Natural History. He visited the Burke Museum as a vertebrate paleontology collection study grant recipient.