Duwamish meanders: A river ran through it

For millennia, the Duwamish River sustained a diverse ecosystem of fertile floodplain forests, marshes and tideflats in what is now South Seattle. The geologic record shows that the Duwamish valley was created by glaciers, then repeatedly transformed by catastrophic volcanic mudflows, earthquakes and floods.

Arguably the greatest transformation the river experienced in recent history was wrought by human engineering. In the early 20th century, a series of major civil engineering projects diverted the comingled flows of three rivers out of the valley, lowered Lake Washington nine feet, shortened the river by four miles, dredged the river into a navigable waterway, filled in the old meanders, and built Harbor Island—the largest manmade island in the world at the time—by washing hillsides into the tide flats. This was largely undertaken for flood control efforts, navigation and commercial interests.

While the pace and scale of the industrialization of the Duwamish valley rivals that of any major city, it also came at a cost. To Coast Salish people, the expansive tidal mud flats and the wetlands adjoining the meandering river were a valuable resource. The channels, islands and shorelines were all populated with names that recorded sacred landscapes, uses, historical memories and meanings.

The engineered changes to Seattle’s shoreline disrupted ecosystems, eliminated traditional food sources (including a productive salmon fishery) and completely reconfigured Coast Salish people's relationship with this place. The land became Seattle’s industrial and commercial heartland and an engine of economic growth for the city. The factories built on top of the old meanders sustained a vibrant economy through two world wars, helping grow Seattle and the Pacific Northwest into what it is today.

The transformed valley continues to provide thousands of jobs. Major efforts are also underway to clean up the river to make the river safe for fish and people alike. The Duwamish Tribe, which plied these waters for millennia, once again have a longhouse along its banks.

Meanders is an interpretation of one of the old meanders of the Duwamish that ran through what is now South Seattle College's Georgetown campus in the Georgetown neighborhood of Seattle. The site was the location of the King County Poor Farm and the area of initial dredging and filling along the Duwamish River in 1913. This installation literally “reveals” the history of the river beneath your feet at the site.

In order to do this, the team researched historical data and context around the vicinity of the site. Here are some of the materials we used: 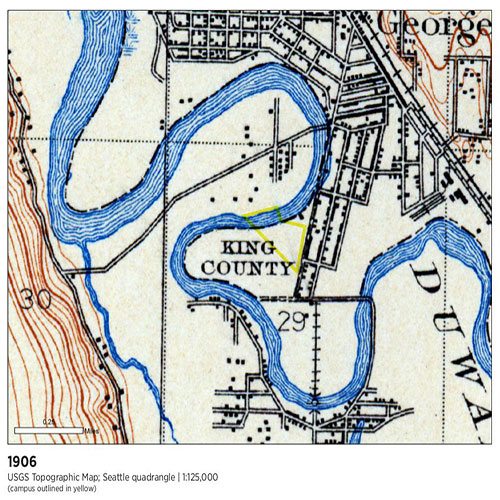 Note the street grid laid out around the river meander in 1906 (South Fidalgo Street to the north and Corson Avenue running along the eastern side). 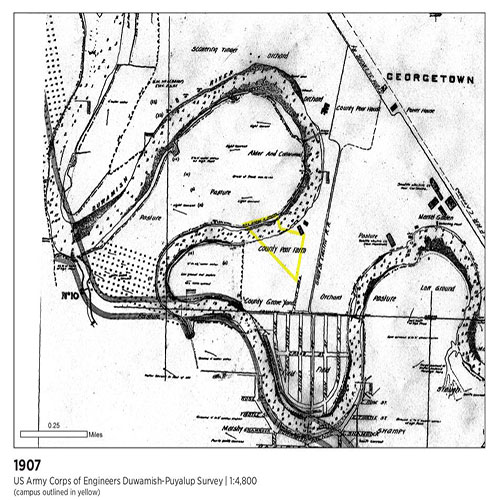 The 1907 Army Corps of Engineers map notes river depth soundings. This map was surveyed due to flooding in 1906 in preparation for flood control planning. 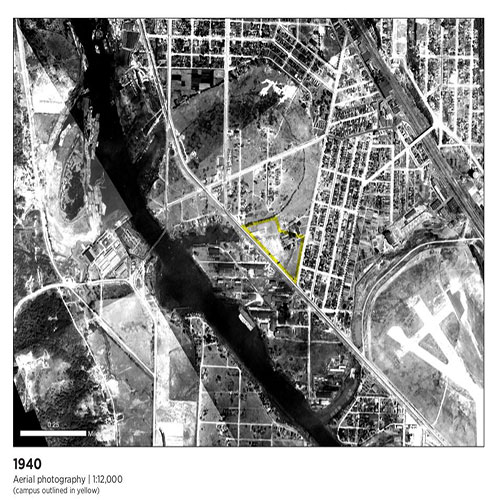 This 1940 aerial photo shows the meander through recently-filled Georgetown. 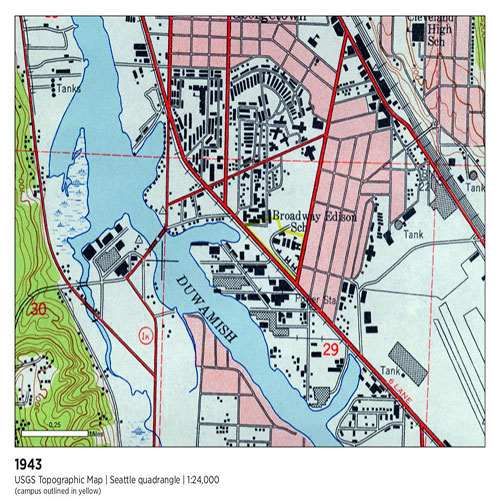 Note the development on the recently filled meander in this 1943 map. Slip 2 and Slip 3 on the contemporary Duwamish Waterway are vestiges of this former meander.

While we don’t know exactly when the installation site was last occupied by the Duwamish River, we can deduce by calculating meander migration rates from river bank positions shown on the General Land Office (GLO) and Army Corps of Engineers maps that it was likely sometime in the last 300 years. This migration process also helped build the lands next to the river.

For the purposes of this installation, we used depth readings from a 1907 survey of a stretch of the Duwamish River that ran through the campus site. The depth readings were made into elevation contours to model the channel form.

These contours were then inverted relative to the elevations of the top of the river bank to reveal the historical depths from the banks to the bottom of the river channel. The resulting digital elevation model is referred to as an “inverted meander,” since the resulting contours create a canopy above the ground surface.

The inverted contour heights were then represented as cloth panels that range from four to 16 feet. The panels are suspended from a mesh structure inspired by the Native place name “təbáli” meaning “Aerial Duck Net Place” (#2 on above map). 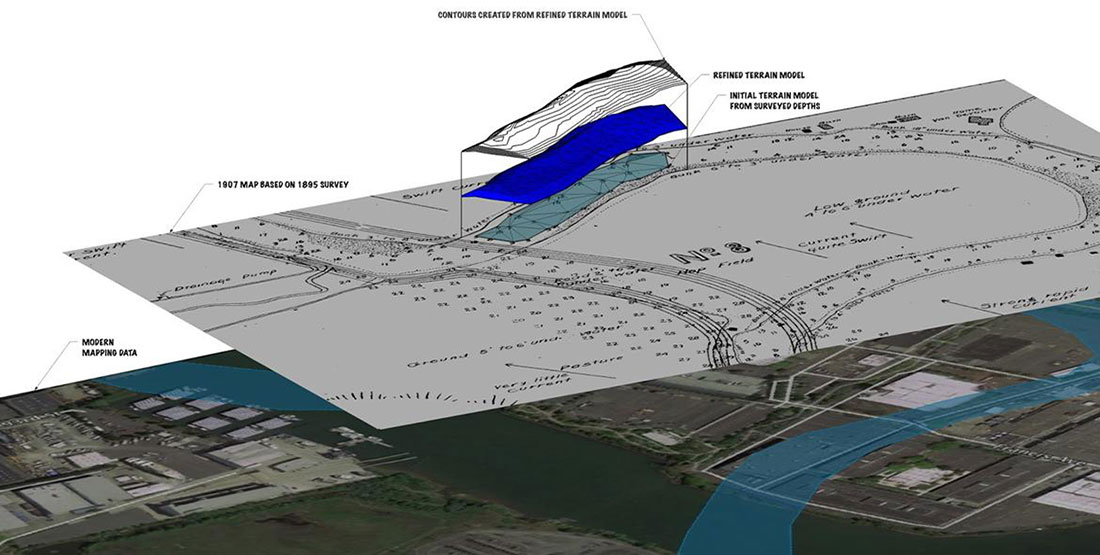 A digital elevation model referred to as an "inverted meader" since the resulting contours create a canopy above the ground surface. 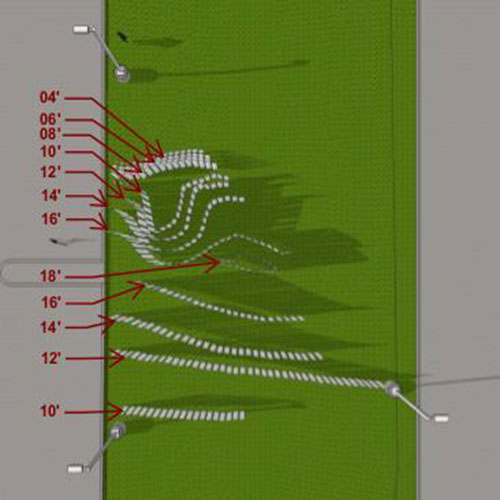 Plan view of placement of contours on installation site. Heights of cloth contour panels annotated in red were derived from 1907 data. 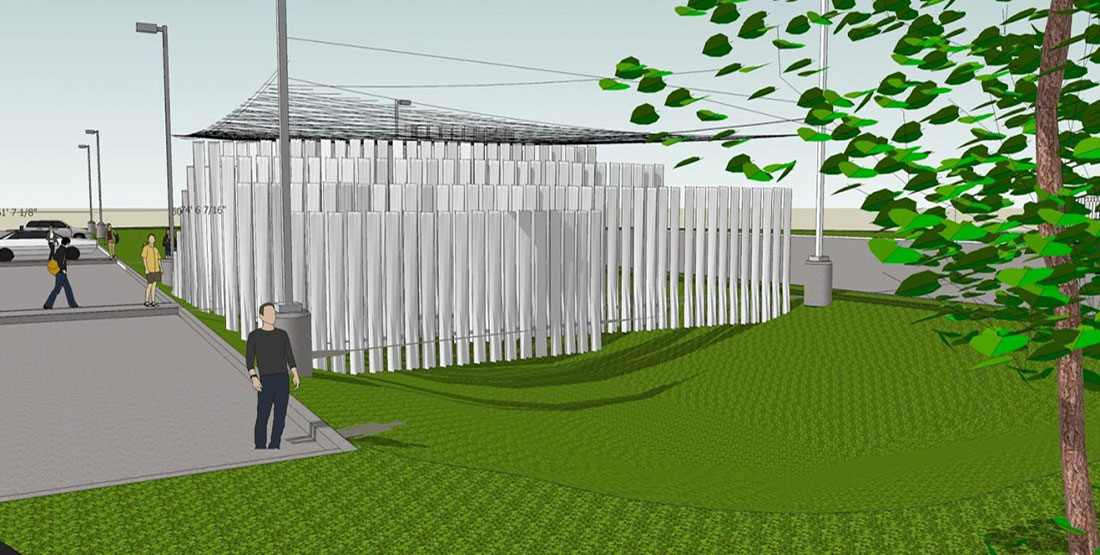 The Duwamish Revealed Project was a great opportunity to bring together environmental sciences, natural and cultural history, and public art practice. Read more about the project in the Seattle Times' article: "'Duwamish Revealed' project means to inspire river's revitalization."