From the late nineteenth-century through the early decades of the twentieth century, white American culture embraced the notion of the Native American culture as rapidly disappearing. The popular visual iconography of the totem pole, along with the feathered war bonnet and teepee, had come to be interpreted as an exotic and spellbinding relic of a "savage" "vanishing race" by whites, and miniature carved model totem poles became popular souvenirs from curio shops to commemorate a visit to a Native village along the northern Northwest Coast.

Urban stores, such as the landmark Ye Olde Curiosity Shop in Seattle, Washington (founded in 1899), offered model totem poles for sale, as well, to those who may never even have traveled to villages of the Haida, Tsimshian or Tlingit - northern Northwest Coast Native cultures from which totem poles originated.

The totem pole, which had become a symbol of "a generalized American Indianess," was not a traditional art form of the southern Coast Salish—the grouping of over fifty autonomous Native American tribes which populate the Puget Sound Basin in Washington state.

Amongst the Coast Salish peoples, traditional religious beliefs did not tolerate extroverted art forms such as the heraldic totem poles of the northern Northwest Coast cultures; thereby, making the circa 1920s Snohomish (a group of the Southern Coast Salish) model totem, or story, pole (pictured at right) so fascinating.

This miniature pole is a container of many intriguing interrelated stories, all of which hinge on the motivations and desires of the man who is to credit for its creation the late Snohomish cultural leader William Shelton (Wha-ceh-dub or Whah-kay-dub) (1868-1938), whom was based out of the Tulalip Indian Reservation, located just north of Everett and west of Marysville in Washington State. 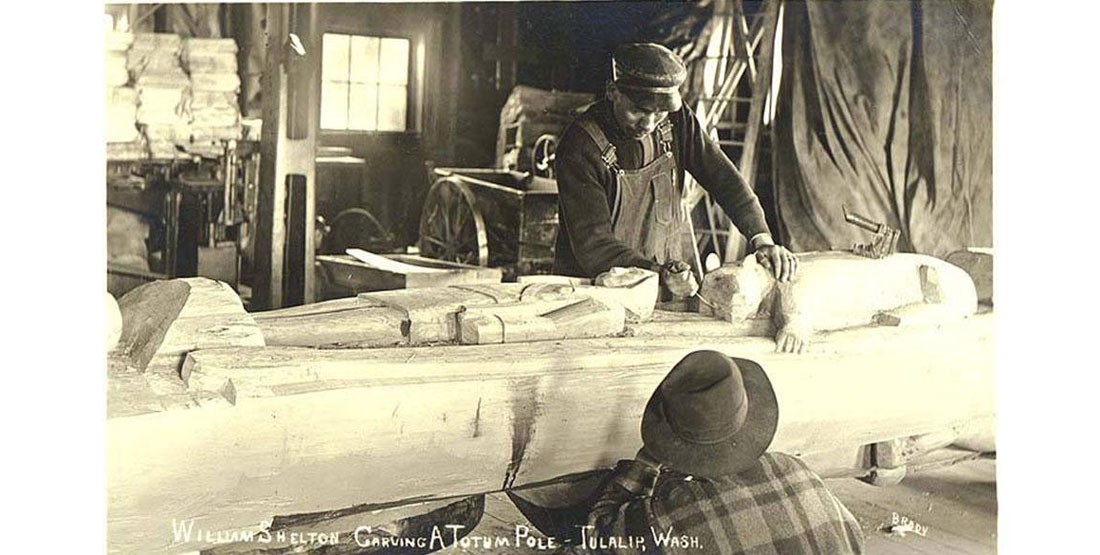 So what impelled William Shelton to create this non-traditional miniature story pole?

By 1912, William Shelton was approaching middle age and had become acutely aware that the cherished traditions and oral stories of his culture were rapidly vanishing after decades of U.S. governmental suppression following the 1855 signing of the Point Elliot Treaty in Washington Territory by leaders of eighty-two Coast Salish tribes.

Analogous to the developments on other U.S. Indian Reservations, residents of the Tulalip Indian Reservation were confronted with the stringent laws of the U. S. Government, which sought to extinguish all vestiges of traditional customs and Native cultural identities and "bring civilization to the Indian." (1)

Shelton sought out an innovative artistic strategy to ensure that his culture’s knowledge could be revitalized and preserved for longevity, and developed the non-traditional story pole public art form to achieve his goals, simultaneously pulling from the storehouse of Salishan traditions and nodding to the freestanding carved totem poles with superimposed figures of Northern Northwest Coast Native cultures.

From 1912, with the carving of his first story pole for the Tulalip Indian Reservation (pictured left), through the point of his death in February 1938, Shelton generated with almost a tornadic force during a quarter century-span at least sixteen large-scale and medium-sized story poles for public display across the United States, as well as countless miniatures for private sale (pictured below) including the model story pole owned by the Burke.

The various story poles Shelton carved ushered in an original innovative form to traditional Southern Coast Salish carving practices. To develop the design components for the pole, Shelton turned to the cultural training he received in his youth to identify the conceptual elements that would most honorably illustrate and encapsulate the knowledge and cultural values of his people: skelalitut or skla’letut figures, which signified an individual’s guardian spirit or supernatural power from which all activities and success in life depended;  and, moralizing oral stories which, in the words of the late Puget Salish language- and culture-preservationist, Vi Hilbert, give expression to the most important values of our [Salish] culture.

“[The oral stories] were the textbooks used by the Indians to teach their children to be brave, loyal and truthful…My mission is to help them [the children] learn and perpetuate our customs, [and]… explain to my people how important it is to leave a record of our Indian learning before we are all gone. That is what I have tried to do with my…poles.” 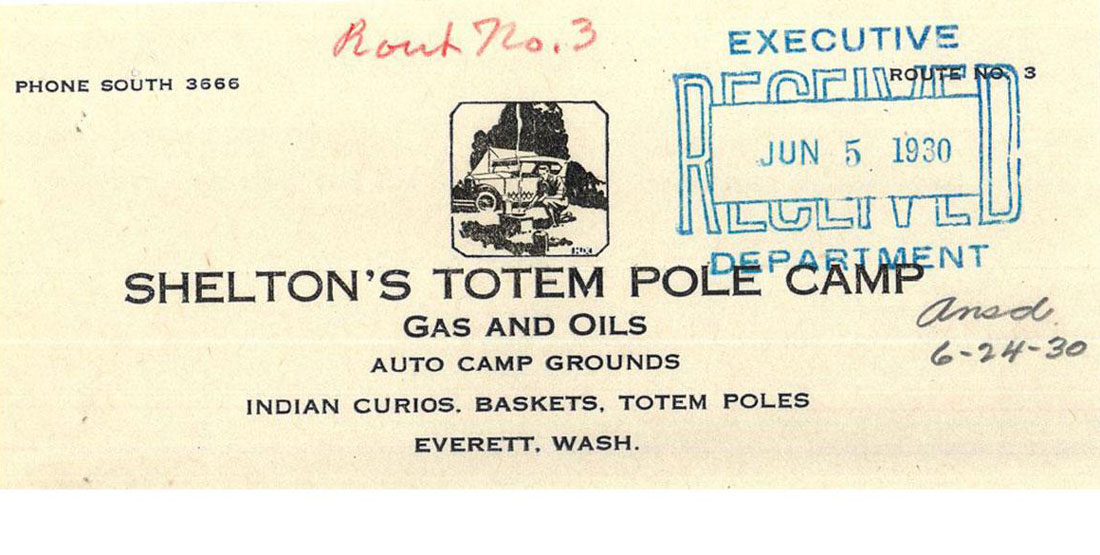 Shelton’s desire for his story poles was twofold. His objective was not only to convey and provide permanence to significant Native Puget Sound moralizing oral stories for the next generation of Salish youth, but also to breach the divide between white and regional Southern Coast Salish cultures by educating the outside white population about Salish cultural principles—whose core values, he acutely grasped, closely mimicked those of the white population.

In his 1923 booklet, The Story of the Totem Pole, Shelton wrote that he “hoped that these stories as well as the Pole will stand as a monument to a vanishing race [and] that they will help our white friends to understand a little of the Indian’s belief in spirits.” In order to achieve this end, Shelton sought out and appropriated the visual language of the freestanding carved totem pole, which was recognizable and easily accessible for non-Native cultures.

Consistent with the initial goals conceived with his first story pole construction at Tulalip Indian Reservation in 1912, the various story poles Shelton would carve late in life acted as tools around which he could, on a larger scale, revitalize local Salish community strength and perpetuate the oral histories of his heritage, as well as attempt to transform the dominant negative view white American society held towards Native American cultures the country over.

Shelton exercised his popularity to become a pronounced cultural leader and spokesperson for his people until his death on February 11, 1938: Campaigning for Native human rights, utilizing his English to provide numerous public lectures on Salish oral traditions and values, programs in traditional Native dances and songs, and carving demonstrations to youth members of Seattle’s Christian Association of Friendly Indians, Y. M. C. A., and Campfire Girls. As Tulalip elder Hank Gobin poignantly expressed, "[Shelton] could see in the future. He preserved something that otherwise would have been lost." (2)