Archaeologists find the earliest use of nutmeg as a food ingredient and evidence of the transition to early farming practices in Indonesia.

In a timely coincidence with the annual rise of pumpkin-spice lattes and other favorite fall foods, a new study published in the journal Asian Perspectives describes the earliest-known use of nutmeg as a food ingredient. Found at an archaeological site on Pulau Ay, a small island in the Banda Islands, central Maluku, Indonesia, the nutmeg was found as residue on ceramic potsherds and is estimated to be 3,500 years old—about 2,000 years older than previously known use of this delicious spice.

The study and two excavations in 2007 and 2009 were both led by Dr. Peter Lape, curator of archaeology at the Burke Museum and professor of anthropology at the University of Washington, in collaboration with colleagues from Universitas Gadjah Mada in Yogyakarta, Indonesia, University of New South Wales, Australia and others. The Pulau Ay archaeological site was occupied from 3,500-2,300 years ago, with animal bones, earthenware pottery, stone tools, and post molds of possible housing structures found. The variety of artifacts discovered provides evidence of changes in how people utilized marine food resources, pottery and domestic animals over time.

Over the first 500 years at the site, people shifted from a predominately fish-based diet to primarily eating domesticated pigs. In addition, pottery was initially thin-walled vessels adapted for storage of liquids that may have allowed people to survive on this water poor island. A few hundred years later, thicker-walled pottery better adapted for cooking appears along with pig bones. 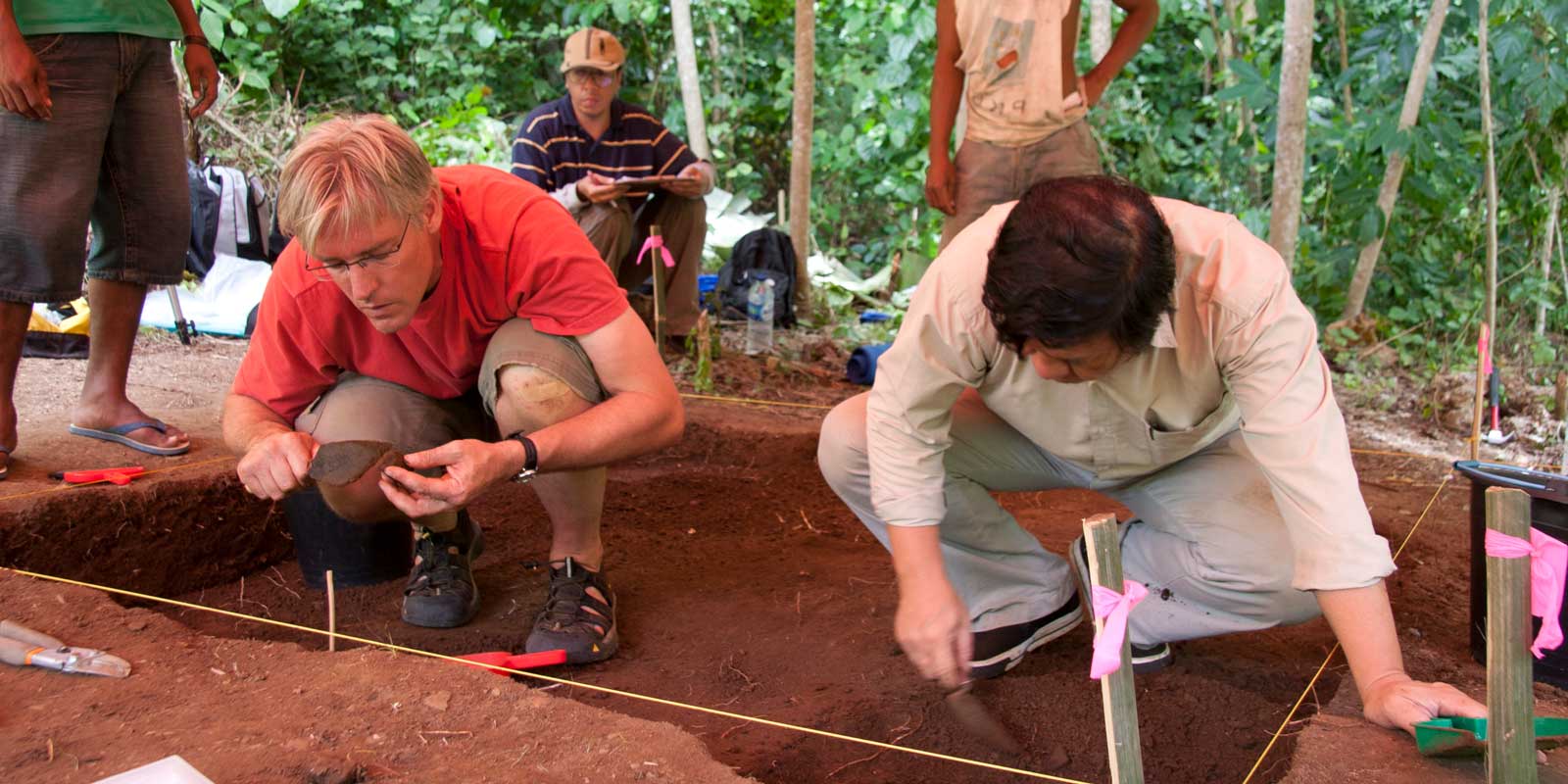 Dr. Peter Lape (left) and Dr. Daud Tanudirjo (right) excavating a layer at the site with the earliest known cooking use of nutmeg.

“This site shows us how people adapted to living on these small tropical islands in stages, from occasional use as fishing camps to permanent occupation,” Lape said. “It’s also fascinating to see such early use of nutmeg, a spice that changed the world a few thousand years later.”

It was on the pottery where Lape’s co-authors Judith Field and Adelle Coster found not only the nutmeg, but also residue from six other plants including sago and purple yam. These plants could have been collected from wild plants, or possibly cultivated through farming. 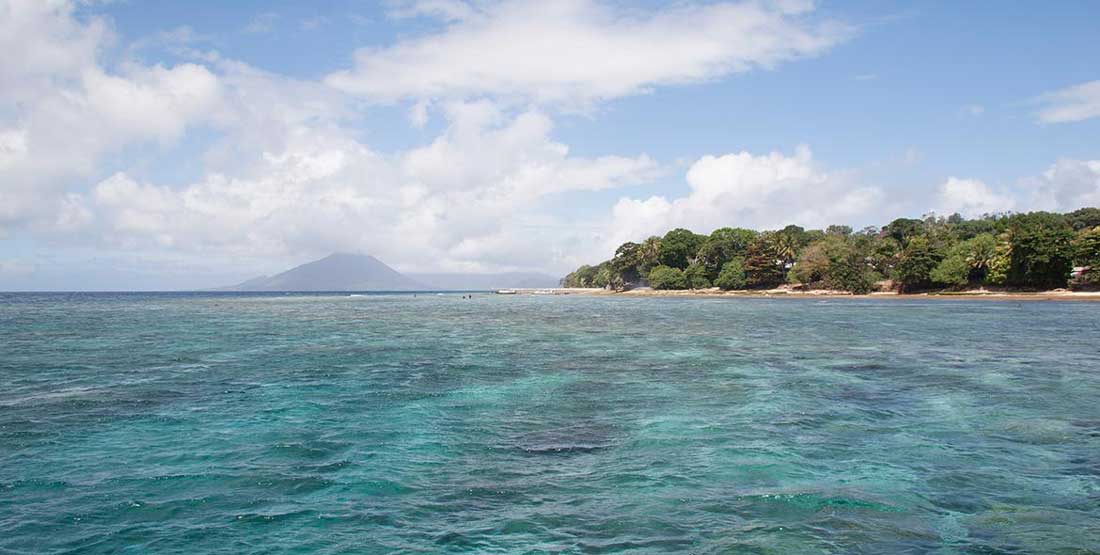 The Banda Islands, Indonesia is home to a recently-described archaeological site that sheds light on the transition to early farming practices in Indonesia. 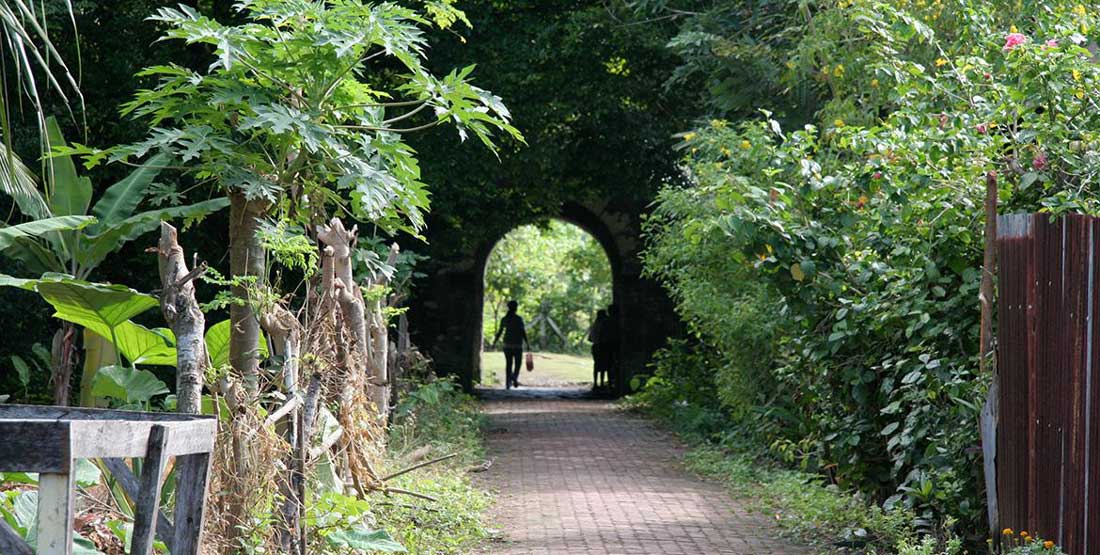 Benteng (Fort) Nassau was built in 1609 and was the first Dutch fort built on Banda Naira Island. It was built to control the trade of nutmeg which was only available from the Banda Islands at the time.

Pulau Ay is a small island lacking both indigenous land mammals and surface water. It likely would not have supported a permanent human population that did not have the technological advantages of domestic animals and water storage.

However, by surveying additional archaeological sites, the study’s authors suggest that the island was regularly visited by people targeting its rich marine reef resources for several thousand years before more permanent populations were established in the early Neolithic (later part of the Stone Age). The most likely homeland for these visitors is the nearest large island of Seram, 100 kilometers to the east. People who possessed sufficient knowledge of Pulau Ay and the seafaring skills to make regular return trips there would seem to be likely candidates for the first Neolithic settlers as well.

Sometime around 2,300 years ago, the site was largely or totally abandoned, and no other sites in the Banda Islands have so far been found that date to the period between 2,300 and 1,500 years ago. Future work aims to answer why these remote islands, which attracted the settlement of people who were quite connected to other places before and after this period, would have been abandoned for 800 years.

"It’s fascinating to see such early use of nutmeg, a spice that changed the world a few thousand years later."

Studies of sites like this one can help illuminate the complex cultural processes at work during the Neolithic period, which saw the introduction of many new plants, animals, and technologies to Island Southeast Asia. The results from this site show that these changes did not happen all at once, but rather were gradually adopted and adapted to allow people to utilize these tropical island seascapes in new ways.

As for the nutmeg, understanding its earliest origins of human use helps connect the dots to later international trades. By the 14th century (and possibly earlier), long distance traders were traveling to Banda to obtain nutmeg; this valuable spice brought the Banda Islands international renown during the early modern era.

A new perspective on a key ingredient that is still a valuable commodity today—especially in a multi-billion dollar industry of fall-themed foods and beverages. Pass the pumpkin pie, please.