About the DIG Field School

The DIG provides teachers with an immersive learning experience through a four-day professional development program at active field research sites in Montana or Arizona, as well as year-round educational resources, support, and engagement with authentic research at the University of Washington (UW) and Virginia Tech (VT). This education and professional development is critical to increasing teacher effectiveness and student success.

The Discoveries in Geosciences (DIG) Field School is a unique, non-profit education and outreach program for K-12 teachers created by Burke Museum paleontologists and now supplemented by Virginia Tech and National Park scientists. 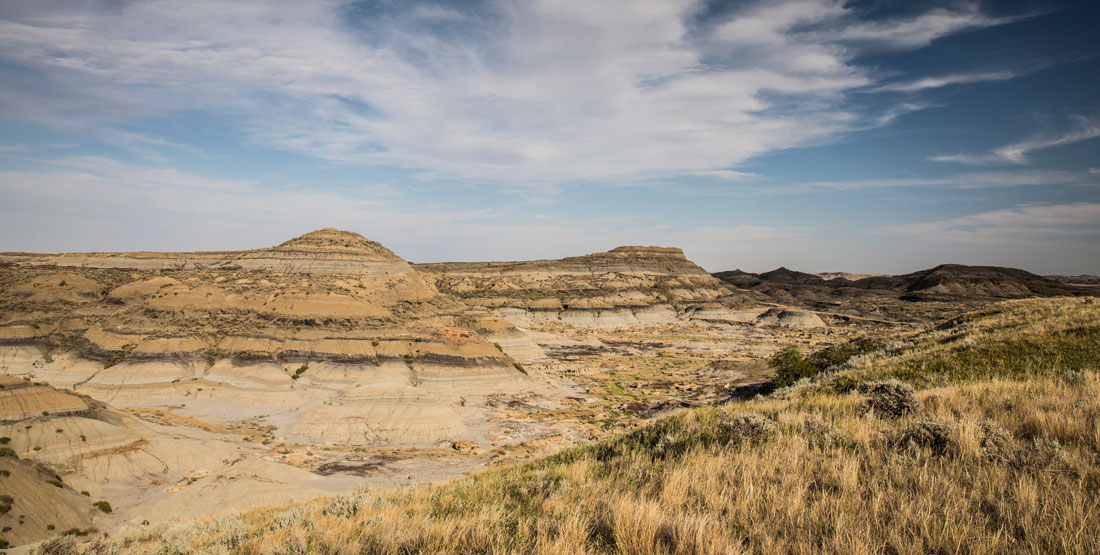 The field school component of the DIG takes place each summer and is a four-day, hands-on introduction to paleontology and geology offered to K-12 teachers. Participants in the program work side-by-side with leading researchers in paleontology and geology from world-class institutions and receive hands-on training in field collecting and research techniques — including collecting dinosaurs and other fossils! They also engage in activities and discussions surrounding STEM education, pedagogy, and the Next Generation Science Standards. This immersive professional development opportunity provides educators with authentic fieldwork and research experience as well as added depth and breadth to their background in science.

We invite teachers of all age groups and backgrounds to apply to the program, and we encourage anyone from communities representing Black, Indigenous, and people of color to apply. Program participants can receive continuing education credits.

The founding DIG Field School — DIG Field School Hell Creek — takes place at the Hell Creek Recreation Area near Jordan, MT — an area famous for preserving dinosaur fossils like Triceratops and Tyrannosaurus rex. The Hell Creek area is also renowned for its preservation of fossils from just before and just after the Cretaceous–Paleogene (K–Pg) mass extinction event, which occurred approximately 66 million years ago and marked the end of all non-avian dinosaurs. This area is an epicenter for paleontologists, geologists, and other scientists around the world, and is an excellent outdoor classroom.

Each year, we accept approximately 30–35 teachers into the Hell Creek Field School program, which typically takes place at the end of July.

DIG PEFO will be piloting its program in early June 2023. The pilot cohort will be limited to 10 participants, but we are hoping to expand in future years. 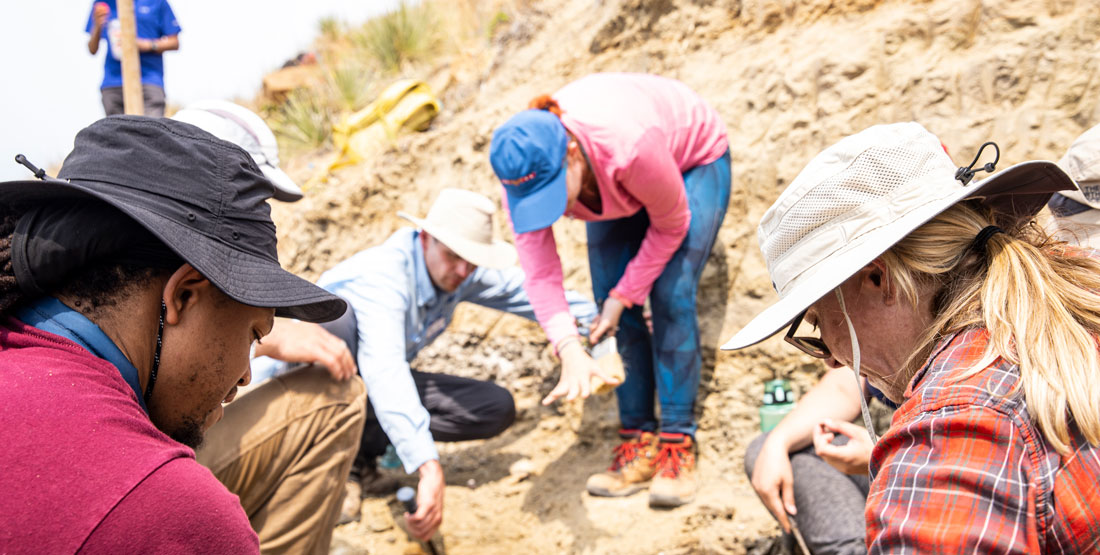 In addition to the field school component of the DIG, we provide K–12 educators and classrooms with educational resources available throughout the year. These resources include hands-on learning tools, classroom activities, and lesson plans developed by the Burke Museum Department of Education and DIG team. With these resources, students in K–12 classrooms participate in real UW research as they look for microfossils in sediment samples, examine fossil casts, and connect with scientists from many institutions. DIG's curriculum supports the Next Generation Science Standards (NGSS).

Greg Wilson Mantilla, PhD is the Director of the DIG and is a Professor in the Department of Biology, Curator of Vertebrate Paleontology at the Burke Museum, and an Adjunct Professor in the Department of Earth and Space Sciences at the University of Washington. He is also a Research Associate at the University of California Museum of Paleontology and was a Curator of Vertebrate Paleontology at the Denver Museum of Nature & Science. He has been published in a number of prestigious scientific journals including Nature, Science, Geological Society of America Special Papers, Paleobiology, Journal of Vertebrate Paleontology, and Scientific Reports and has appeared in on-line reporting for the Huffington Post for his work in Hell Creek, Montana as well as Nature Podcasts and Science Daily. His research has been funded by a number of organizations including the National Geographic Society, NSF, USDA Forest Service, the American Philosophical Society, and the Paleontological Society.

Brody Hovatter is a graduate student in the Wilson Mantilla Lab and assists DIG Director Dr. Greg Wilson Mantilla with management of the program. Brody is also a DIG Field School instructor and has worked with the program since 2015.

Katharine Canning is Assistant Director of School & Teacher Programs, leading Burke programs and initiatives that serve teachers and students across Washington state and beyond. She led recent efforts to update DIG classroom resources and is excited to continue to build on those efforts to increase access to this amazing program and continue to support program participants in connecting students with authentic research and real-world STEM. Katharine has worked in both informal and formal learning settings. Prior to finding her niche in museums, Katharine taught 7th grade science in California public schools. She is energized by the ways informal and formal education can work together to ignite curiosity and encourage a life-long love of learning.

Devin Leatherman is Burke Box Manager, designing and building the Burke Museum’s Burke Boxes. These interactive programs use real museum collections to enhance learning opportunities in classrooms, libraries, homeschool environments, afterschool programs and even memory care facilities across Washington state. The launch of the redesigned DIG Boxes means Devin’s content now has a nationwide reach. With over a decade of experience in informal education, Devin built and implemented programming for several major museums in the greater Seattle area. She has a deep passion for using museum outreach programs to disseminate accessible, high quality, hands-on informal learning experiences to learners across the nation.

Rachael Canaday is the DIG Program Coordinator, supporting the administration of the DIG Field School Program and ongoing engagement between the Burke Museum, K-12 teachers and their students. Rachael has led programs and developed curricula for numerous museums and educational non-profits including the Seattle Aquarium, Pacific Science Center, National Geographic, and the Burke Museum. She is a former New York City public school teacher and taught elementary school STEM for ten years across multiple grade levels. Rachael loves bringing hands-on, object-based into classrooms and is excited to continue to expand teacher professional development opportunities through the DIG Program.

Sterling Nesbitt, PhD is the Director of DIG PEFO and is an Aassociate Pprofessor in the Department of Geosciences at Virginia Tech and a research associate at many institutions across North America. He has studied the rise of dinosaurs and their close relatives and many of those discoveries have been made within Petrified Forest National Park. He has conducted fieldwork all around the world looking for early dinosaurs and kin.

Sterling attended the University of California, Berkeley as an undergraduate and received his PhD in Geosciences from Columbia University in 2009 and conducted research as a postdoctoral researcher at The University of Texas at Austin, University of Washington and the Field Museum.

Michelle Stocker, PhD is a Lead Instructor for DIG PEFO and is an assistant professor in the Department of Geosciences at Virginia Tech and a research associate at many institutions across North America. She is a world’s expert on phytosaurs (long-snout, crocodile like predators from the Triassic) and other living and extinct reptiles. She is a major advocate for women in science.

Adam attended Notre Dame as an undergraduate and received his MS and PhD in Geosciences for The University of Texas at Austin.

DIG Field School Instructors are a diverse group of university professors, postdoctoral researchers, graduate students, and postbaccalaureates from many different institutions including the University of Washington, University of California, Virginia Tech, University of Alabama, and more. These instructors bring their passion for paleontology and teaching every summer and are an invaluable part of the program. 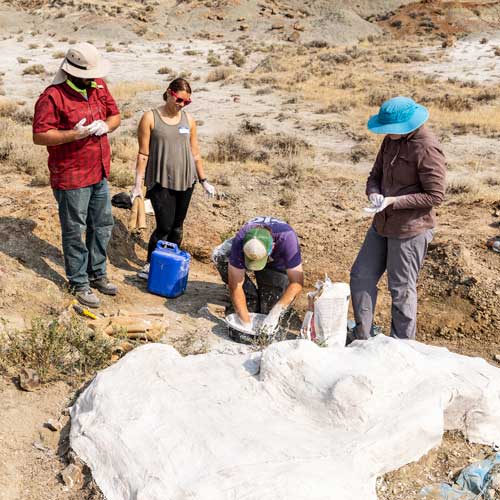 Sign up for updates from the DIG Field School, including info about field work and research, application deadlines, and more.