Burke spider collection volunteer Laurel Ramseyer has studied the spider fauna of pine cones since she discovered that habitat in 2008. Earlier in 2015, she and I published a report on our pine cone spider findings to date. Since summer field season ended, Laurel has been hunting for pine cone sites in the Greater Seattle urban areas, where various native and non-native pine species are often planted in parks, private yards and commercial property. Her primary project is tracing the spread and distribution of Ozyptila praticola, a non-native crab spider that occurs in cones.

In early October, Laurel visited a commercial site (property of a printing plant) north of Seattle along the Mukilteo Speedway where a large native white pine tree had dropped plentiful cones over a yard otherwise occupied by some wooden pallets. The folks at the plant said, "take them all!" when asked for permission to collect spiders in their pine cones (that’s quite a common response we hear from private property owners). 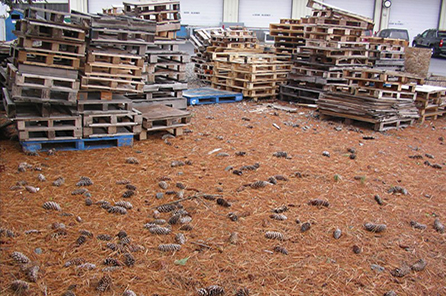 View of the pine cones and wooden pallets at the collecting site. 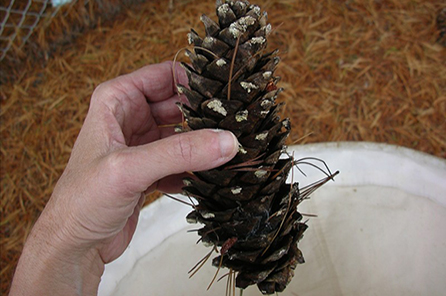 One pine cone from the site.

Laurel beat 100 pine cones into her net to collect spiders. This produced a very nice sample of 34 spiders (two of them already dead) and seven harvestmen, but none of the target crab spider species. However, serendipity strikes again!

Included in the sample were six small gray-brown jumping spiders Laurel didn't recognize—one an adult male. Laurel sent me a photo of the specimens but I couldn't immediately figure them out either. They certainly were not Neon reticulatus (wrong coloration) or Talavera minuta (wrong structure), the two smallest jumping spiders native to western Washington. I thought they might possibly be Sitticus pubescens, a European species that's been found once in nearby Everett.

In mid-November, Laurel stopped by my lab, mainly to look at Ozyptila crab spider specimens, but she also brought the Mukilteo sample containing the mystery jumping spider. Turns out it was not a Sitticus! I ran it through the late Vince Roth's spider genus identification key (the only one that works) and it went to Euophrys. I knew there are no native Euophrys in western Washington, so I tried the world jumping spider guide and the key to European species. The result was unequivocal: Laurel's specimens are Pseudeuophrys lanigera, common in southern Europe as far north as Scotland but never before found in the western hemisphere! 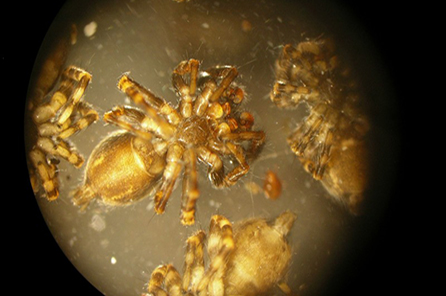 Closeup of specimens showing the adult male, only about 3 mm long! 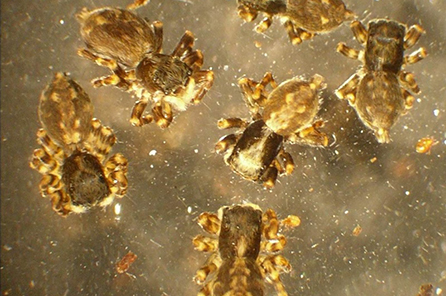 This little species (2.5-6 mm long) joins Pseudeuophrys erratica, another common old-world species (I collected it myself in far-eastern Russia) that has turned up in New York and New Jersey. Other introduced European jumping spiders found here include the above-mentioned Sitticus pubescens and the abundant "zebra jumping spider," Salticus scenicus.

We'll probably never know just how P. lanigera was brought to western Washington, but it's known from walls and buildings in Europe, so it would have been easy to carry in a fertile female or her eggs on a shipping container or other goods. 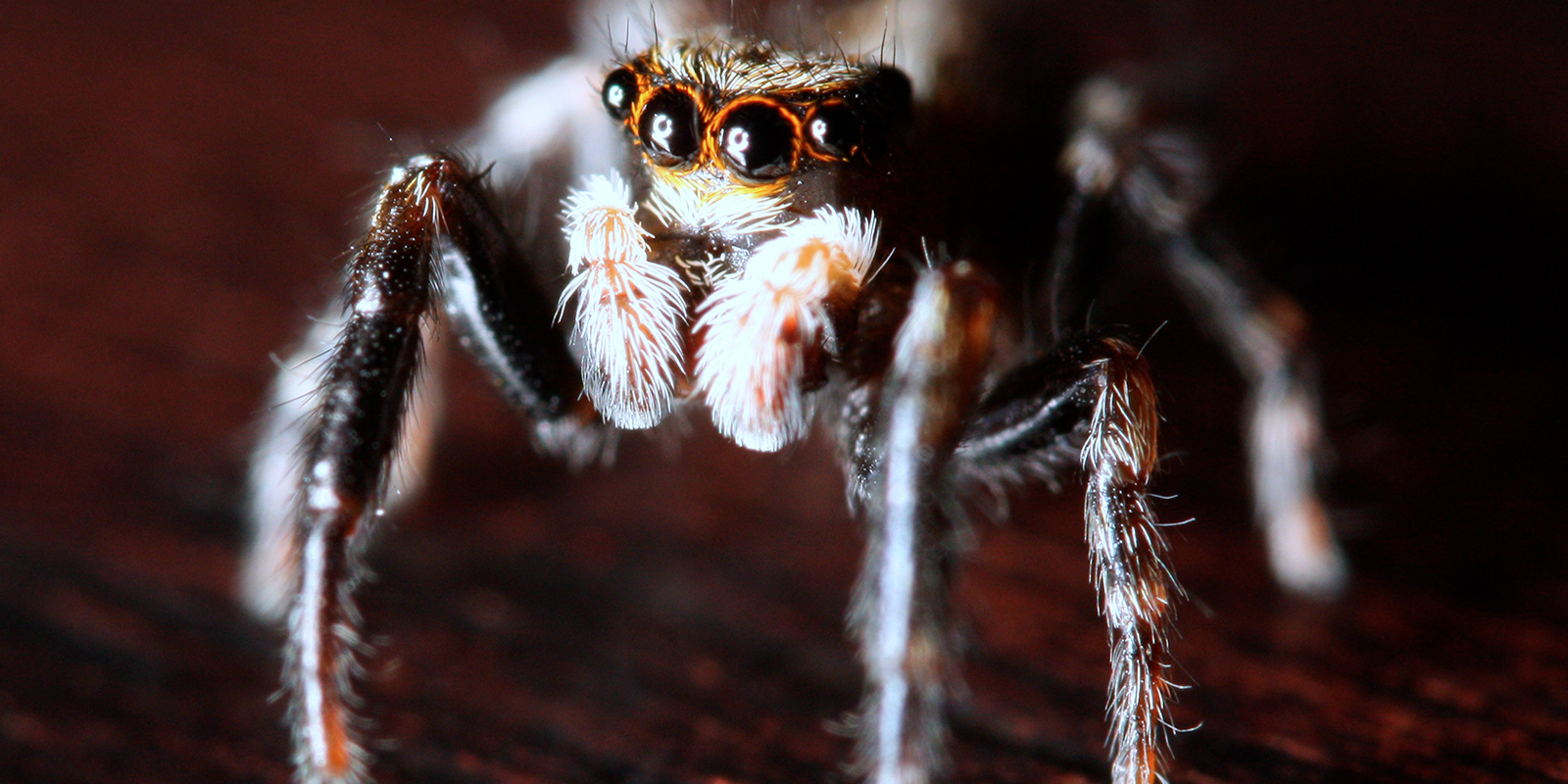 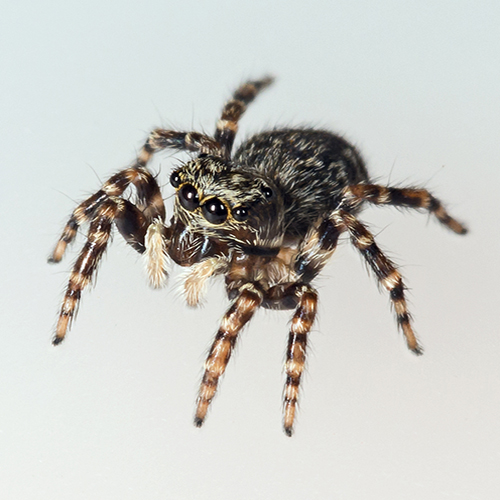 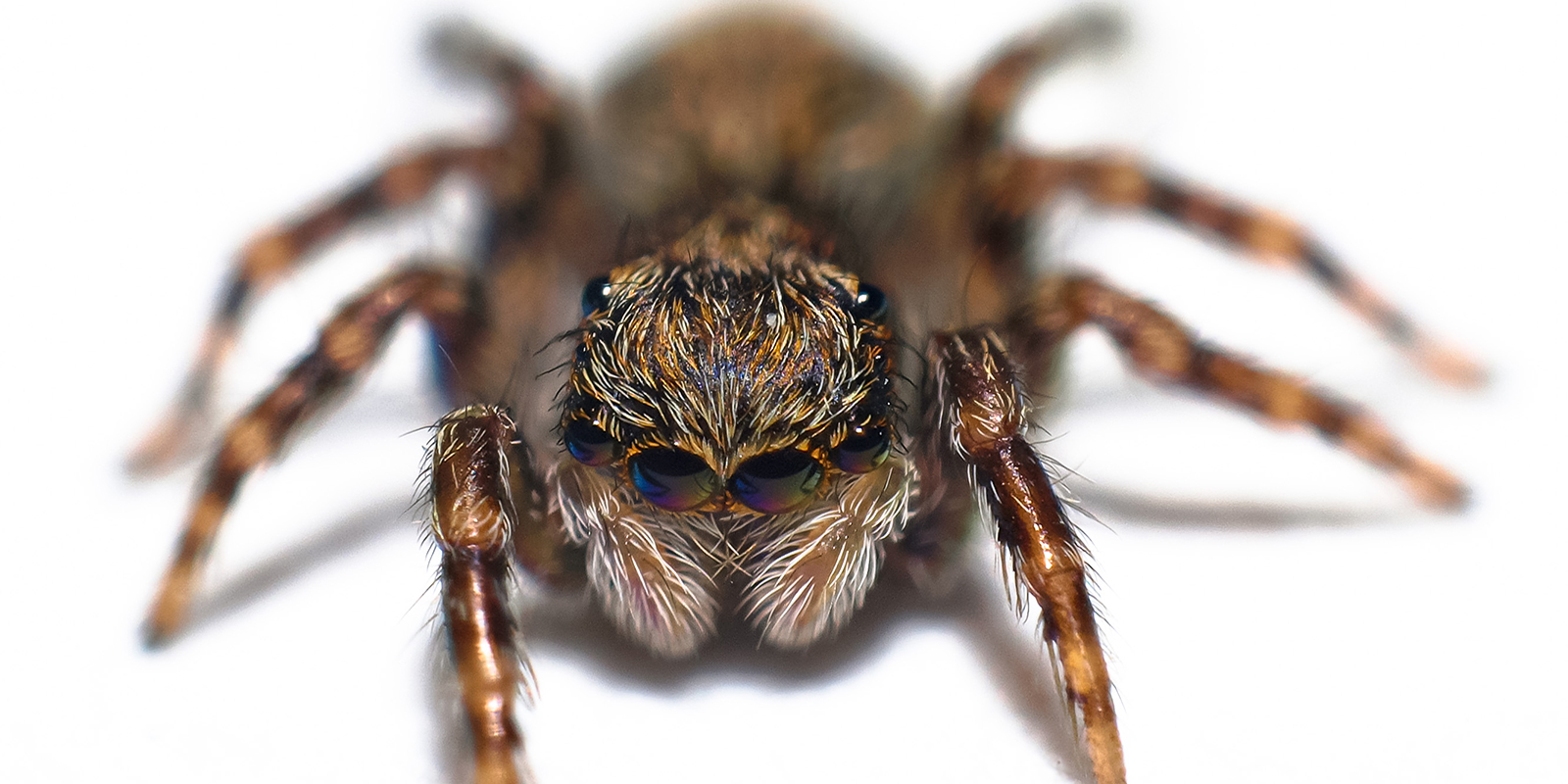 Jumping spiders (spider family Salticidae) are colorful, active hunters with big eyes. They make no webs, but hunt in the daytime, pouncing on their prey like a cat on a mouse. They have the best eyesight of any local spider, and are the only spiders able to get a really clear image of what a human looks like. All are harmless to humans.

We don't yet know how well-established this spider is in the Seattle region, or whether it will spread, and if so, how fast and how far. Since the species prefers manmade habitats, it's unlikely to become an ecological problem like some invasive species. And it's cute! So, welcome to Washington!

In January, I heard from Betsy Bruemmer, collection manager at Seattle's Museum of History and Industry, inquiring about a little jumping spider she found on sticky pest monitoring traps in their collection storage area. From Betsy's photos, it looked possible that this was the same species Laurel had found in Mukilteo. On January 20, Laurel and I made it down to the storage building (in the Georgetown neighborhood) where we spent over an hour and a half searching both outside and inside the building. We didn't spot any live spiders, but Laurel and Betsy found three dead specimens in remote corners and I removed some still-living spiders from the most recent sticky traps. Betsy caught one live female the week before. They all turned out to be Pseudeuophrys lanigera. Betsy's traps caught at least 50 of them over the winter in just three or four rooms.

Now we know that this species has become well-established in at least two Puget Sound counties, right under our noses! 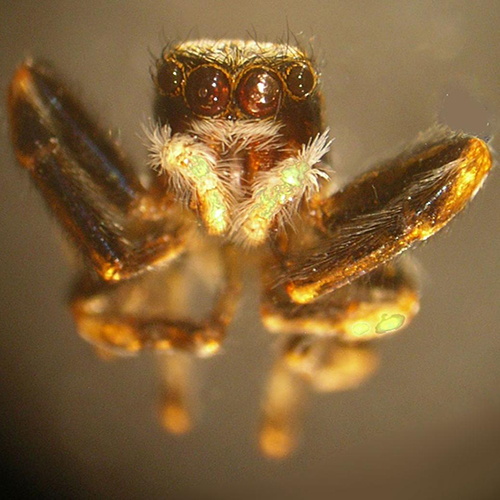