A note from the author

I am a junior at Garfield High School in the Seattle Central District. My interests include singing with Vocalpoint! Seattle and playing violin with my school orchestra. During a flight returning from a visit to my grandparents in Hawaii, I sat next to Ohi, an undergraduate student of Professor Holly Barker at the UW, who encouraged me to contact Professor Barker. I met with Professor Barker several times over Zoom while working on this project. My mom is from Taiwan, and my dad (who is from Hawaii) has talked to me about Hawaiian sovereignty issues. This combination is what attracted me to learn more about the Indigenous Taiwanese canoe at the Burke Museum.

The tatala is the fishing boat of the Indigenous Tao people of Pongso no Tao, a small island 50 miles off of southeast Taiwan otherwise known as Lanyu (in Chinese) and Orchid Island. But what was one doing in a garage in the Ravenna neighborhood of Seattle? Surrounded by gardening equipment, Michael Jacobson, the owner of the tatala in his garage and also the donor of the Burke Museum’s tatala, explained to me how he acquired these canoes. 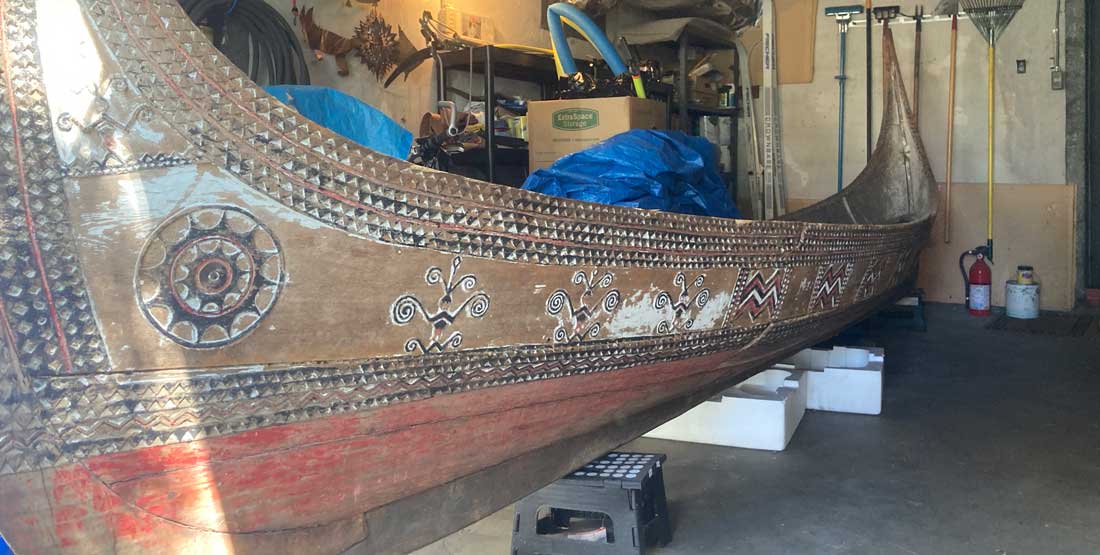 The tatala in Michael Jacobson's garage.

From Taiwan to Ivar's Salmon House to the Burke Museum

As Michael described it to me, the story of the Burke Museum’s tatala started at Ivar’s Salmon House, a prominent restaurant in the Seattle area, some 30 years ago. When he was dining there, he looked up and noticed that two of the canoes hanging on the ceiling were not from the Pacific Northwest but instead, came all the way from Pongso no Tao.

For years, Michael would go to the Ivar’s and admire the tatalas hanging among other Northwest canoes. Around five years ago, he noticed that the two canoes were gone. Curious about where they went, Michael called Ivar's about it. They informed him that the tatalas were put into their warehouse in Georgetown, and offered to let him see them. Later he learned that the tatalas were obtained by Ivar Haglund, the founder of the restaurant, during a trip of his to Taiwan in the 1970s when he went to buy furniture for the Chinese Room in the Smith Tower (also owned by Ivar).

Michael purchased the two tatalas from Ivar’s. Of these two tatalas, he donated the one in better condition to the Burke Museum, which is currently in the Culture Is Living gallery because he thought it would benefit the community. 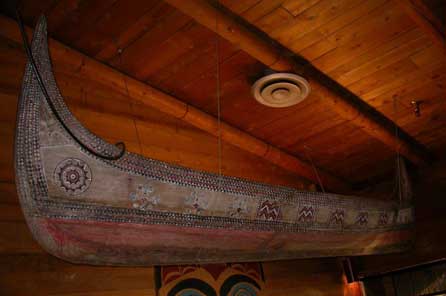 One of the tatalas was used as a light fixture hanging from the ceiling of Ivar's Salmon House. 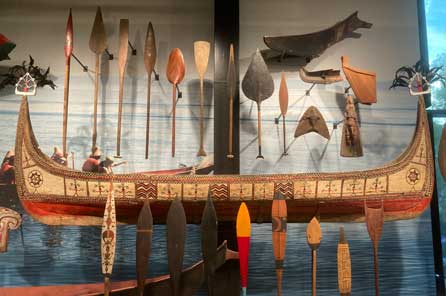 Tatala featured in the Burke's Culture is Living gallery. 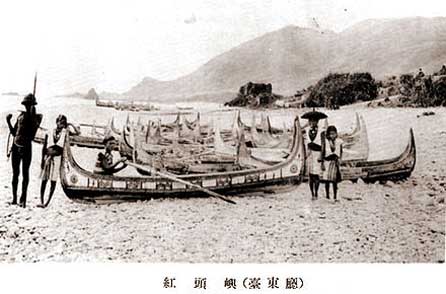 Constructing and designing a tatala

For the nearly 4,000 Tao who inhabit Pongso no Tao, the construction of a tatala is a rite of passage. Tao men “must have a boat in order to lead a normal family life and reach the diverse fish resources. During the flying fish season, we [the Tao] use the boat to hunt for flying fish and mahi mahi. This is the most important role of the tatala” (Jiang, My Uncle's Tatala 2016) 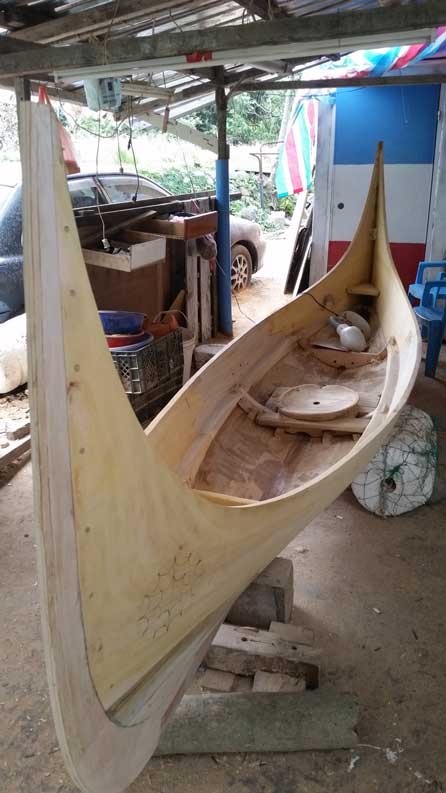 There is no written way on how to make a tatala since the Taos practice oral tradition. The construction of the canoe is passed down from father to son. Three species of wood are used to make the tatala. The wood chosen for a tatala needs to be from a living tree that’s owned by the village the maker is from. The harder, more durable woods are used for the bottom of the canoe to protect it from rocks and coral, while the lighter, softer woods are used for the sides of the boat for carving.

The Tao do not consider the patterns on the canoe as decorative, but instead a representation of their belief system. For example the human figure on the sides of the boat represents Magamoag, the ancestral hero of the Tao. 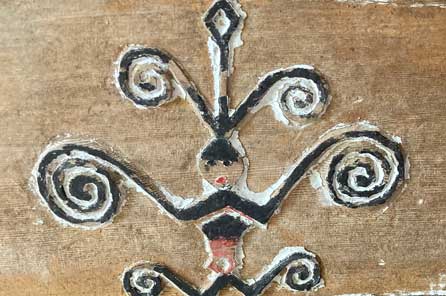 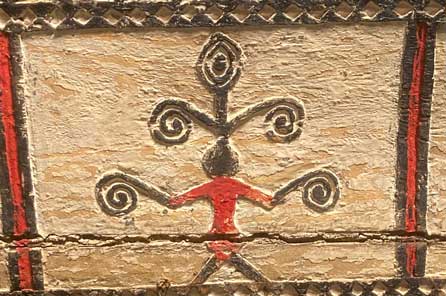 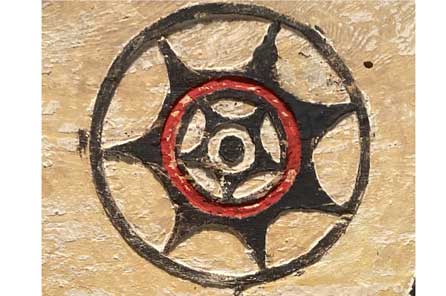 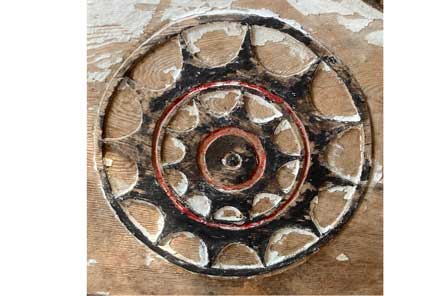 The zig-zag patterns on the side of the boat represent waves and the tiny triangles that cover the boat are scales. The cross on the bow of the canoe is the result of missionaries, likely after the retrocession of Taiwan to the Nationalist government in 1945. 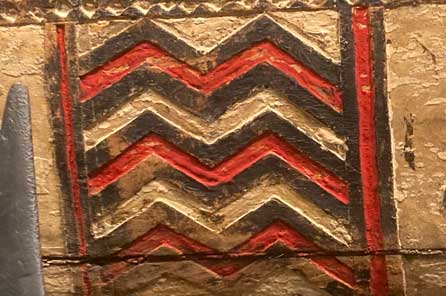 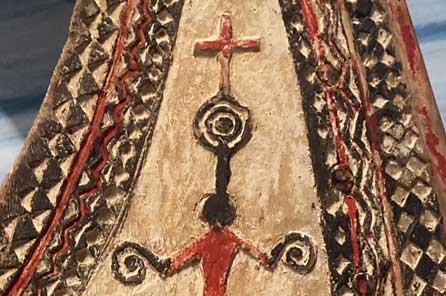 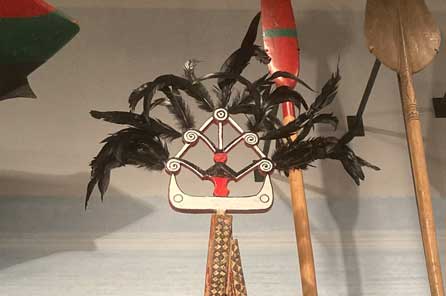 The finials of the tatala, known as the moroung, are decorated with black chicken feathers and sit on the two points of the tatala. The two tatalas acquired by Michael didn’t have their moroung on them so as a gift, the Tao community gifted the two moroung to Michael, which he in turn donated to the Burke. 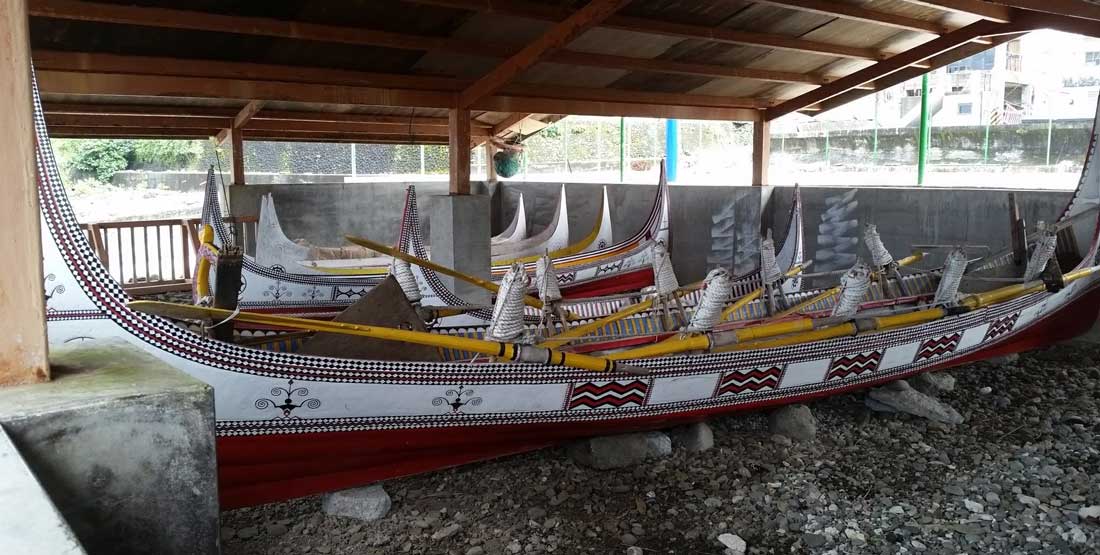 The paints for the tatala are traditionally made of ground shells for the white paint, soot for the black paint, and Indigenous clay for the red paint (Lamuran, 2021). Nowadays though, most tatalas are made with longer lasting and easier to get commercial boat paints.

Seattle has one more interesting connection with Pongso no Tao and the tatala. Michael introduced me to Christie Park, a mini park in the heart of the U-District with three metal benches inspired by the tatala and Tao symbols across the walls. The park emphasizes the presence of the Taiwanese-American community in Seattle and the beauty of Taiwanese Indigenous art. 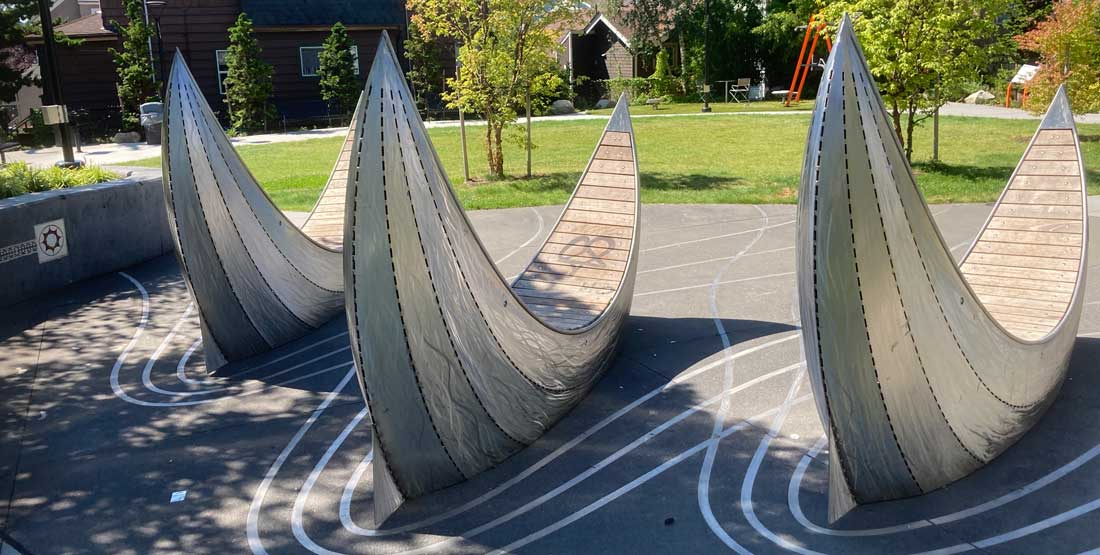 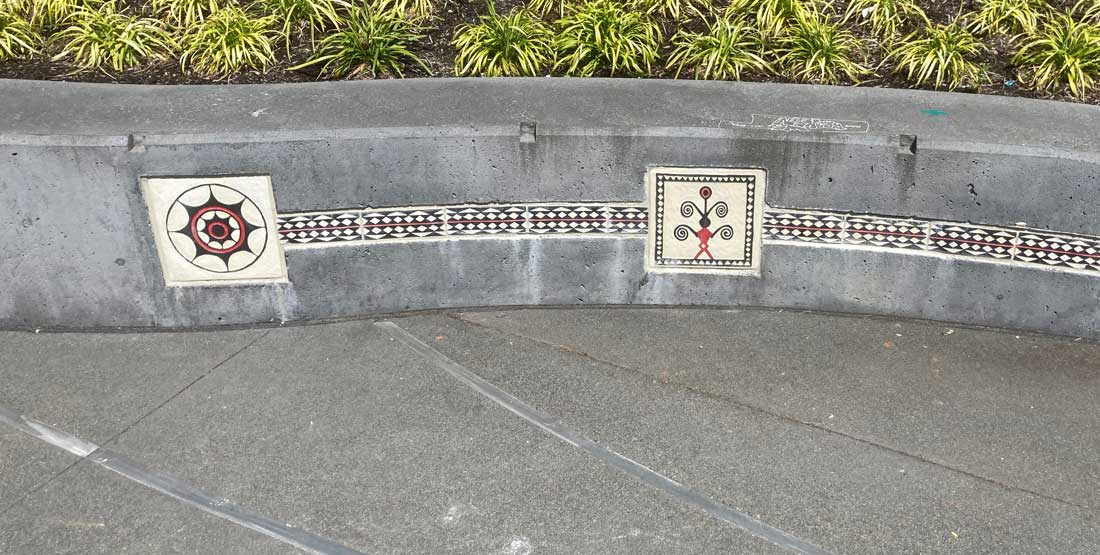 Tao symbols on a wall in Christie Park, Seattle.

Every week, Taiwanese community members have a potluck at the park where they eat, chat, and help clean and tidy the park. While there, I interviewed Clara Chen, a Taiwanese immigrant who moved to Seattle in 1980 to work for Boeing. When the city of Seattle approached her with ideas of expanding the park on her property, she made a deal with them in which they had to make the park somehow connected to Taiwan. She and a few other community members formed the Friends of Christie Park, a group that helped plan out the designs for the park. After considering many ideas, they focused their attention on having a tatala-themed park.

She came up with the idea when she came across a tatala that was on display in the residence of former Taiwanese representatives to the United States in Washington D.C., also known as Twin Oaks Estate. She also was inspired by meeting a delegation of Tao people who were visiting Seattle for the Tribal Canoe Journey, an event where Indigenous peoples canoe together along the Pacific coast. Clara got in touch with Michael to talk about his tatala and worked with local artist Paul Sorey to design and make the benches. 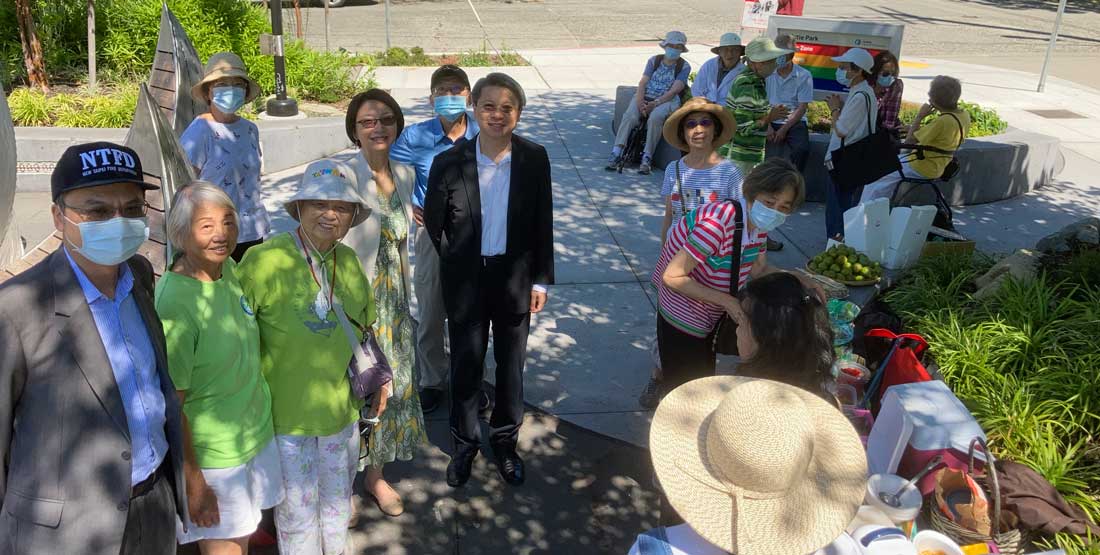 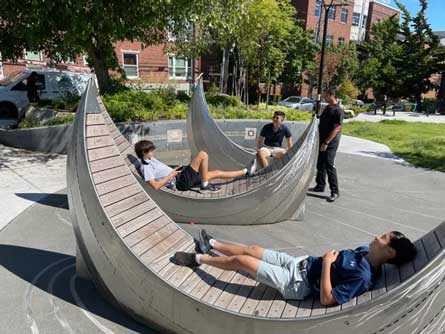 Although it is unexpected to see so many tatalas in Seattle, it is wonderful to see them being respected, cared for, and remembered by individuals like Michael Jacobson, Clara Chen, the Burke Museum, and the City of Seattle with Christie Park. 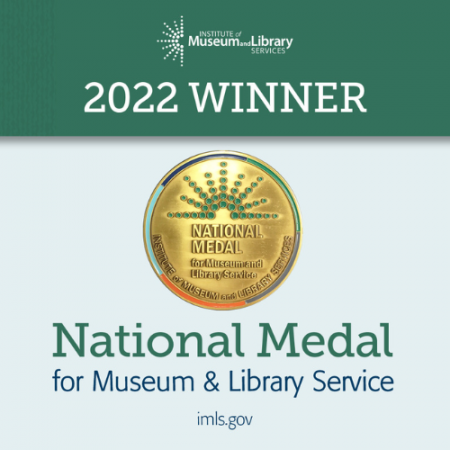 The Burke Museum is one of six recipients of the 2022 National Medal for Museum and Library Service.

The Burke Museum is one of six recipients of the 2022 National Medal for Museum and Library Service.