A mammoth find in Sequim

Fossils In the Field Mammals

A partial skull of what’s likely a Columbian mammoth was found along an eroded bluff near Sequim, Washington, earlier this month! Local residents spotted the teeth of the mammoth skull while walking on state Department of Natural Resources land and contacted officials who put them in touch with Burke paleontologists. 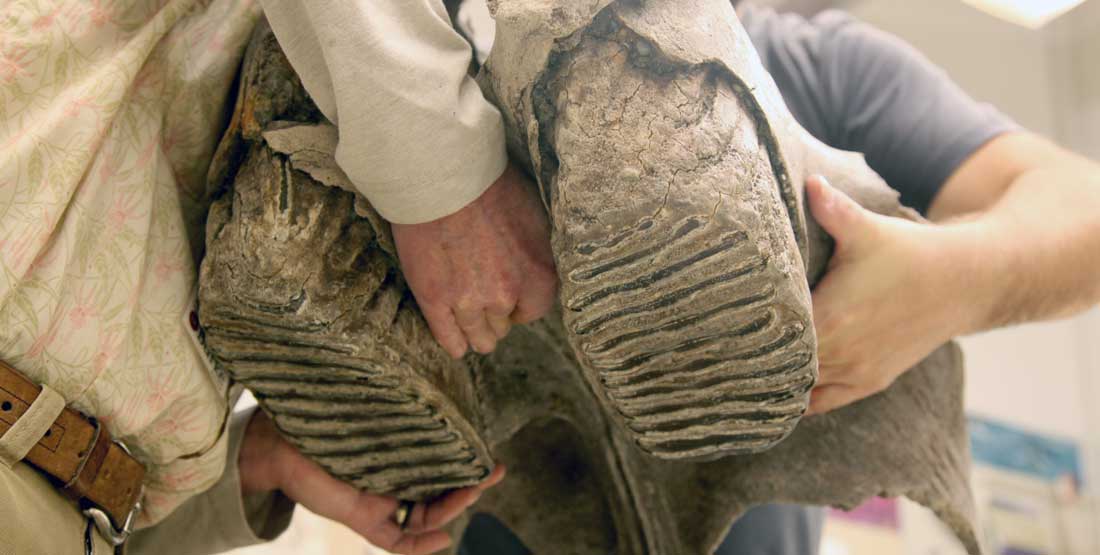 The partial skull of a Columbian mammoth was found near Sequim earlier this month and is now undergoing conservation at the Burke Museum. Pictured are the upper teeth.

Christian Sidor, Burke Museum curator of vertebrate paleontology, and Bruce Crowley, Burke fossil lab manager, went to investigate and help collect the specimen. They found that the largest portion of the fossil—the upper jaw containing two massive teeth—had already come completely out of the bluff where it had resided for thousands of years. However, there were smaller pieces of the fossil still embedded at the base of the bluff.

“The fossil is preserved in rocks that represent a gravelly river bed,” Christian said.  “The animal must have died close to the river, been swept in (or scavenged), and then its skull was eventually buried.” The cobble-like layer of rock and sand surrounding the fossil indicates that it is likely 50,000-100,000 years old.

Columbian mammoths (mammuthus columbi) once roamed from Alaska to Mexico and are the most common species of mammoth fossil found in this part of Washington state—so common, in fact, that the Columbian mammoth is the Washington state fossil. Several other mammoth fossils have been found in the Olympic Peninsula region in recent years are available for study in the Burke’s paleontology collection (you can view the fossils in our online paleontology collections database).

After a closer look at the fossil, Christian and Bruce began carefully exposing the remaining piece from the surrounding rock—uncovering part of the mammoth’s occipital condyles (where the skull attaches to the neck) as well as part of its cheek bone, along with numerous smaller fragments.

“Most fossils are isolated, broken elements,” Christian said, “so it doesn’t surprise me that it’s only a small part of the skeleton.” The duo surveyed the site for any additional signs of fossils, but none were found.

They prepared a field jacket for the portion of the fossil still in the bluff by wrapping it in aluminum foil then applying strips of burlap coated with a plaster mixture. (Watch Burke paleontologists follow a similar process in this video.) The field jacket helps to provide stability and protection for the fossil as it is being removed from the surrounding rock.

But the plaster would need to fully set before it could be moved, so they collected the jaw of the mammoth and returned to the Burke for the day. 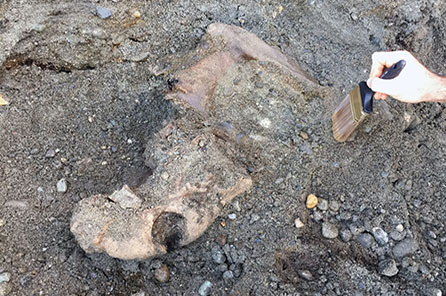 A remaining portion of the fossil still surrounded by rock. 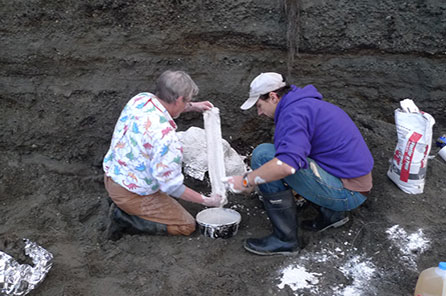 Bruce and Christian dip strips of burlap in plaster and apply over an aluminum foil layer covering the fossil.

After the plaster was fully dry, Christian and Bruce returned to the location and carefully collect the remaining fossil.

Now that the fossil is at the Burke, the conservation process has begun! Conservation starts with carefully removing any remaining rock and sediment from the fossil—a fairly simple task given how soft the surrounding land was. However, the step of putting the pieces together likely won’t be as simple.

“We’ll try to put it back together as best we can, but there’s no telling how much is missing,” said Christian. 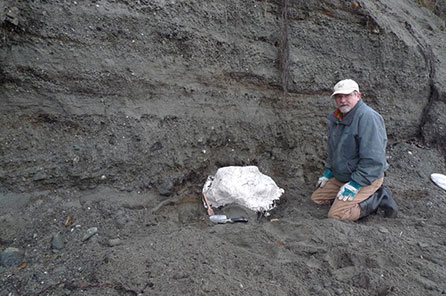 Bruce removes the fossil in its plaster field jacket.

While the specimen is at the Burke, Christian hopes to learn more about it. “Analysis of the teeth would allow us to estimate the age of the individual, but based on its size it appears to be an adult,” he said about the find, noting that “each one provides an important piece of data on our region’s natural history.”

The mammoth’s upper set of teeth are shown.

“Vertebrate fossils are important objects that shouldn’t be viewed as trophies,” he stressed. “Bringing the fossil to the attention of the Burke Museum assures that the scientific community can access the data contained within the specimen and that is available to the people of Washington in perpetuity.”  Just two years ago, an 8 ½ foot Columbian mammoth tusk was unearthed at a construction site in Seattle’s South Lake Union neighborhood. The tusk, affectionately referred to as “LuLu” is currently undergoing conservation behind the scenes in the Burke’s paleontology collection.

What’s next for the Sequim mammoth fossil? "Once it is stabilized, documented, and preliminarily studied, the Sequim Museum is interested in displaying the specimen,” Christian said. “My goal is to work with the local museum to get the fossil on display soon.” 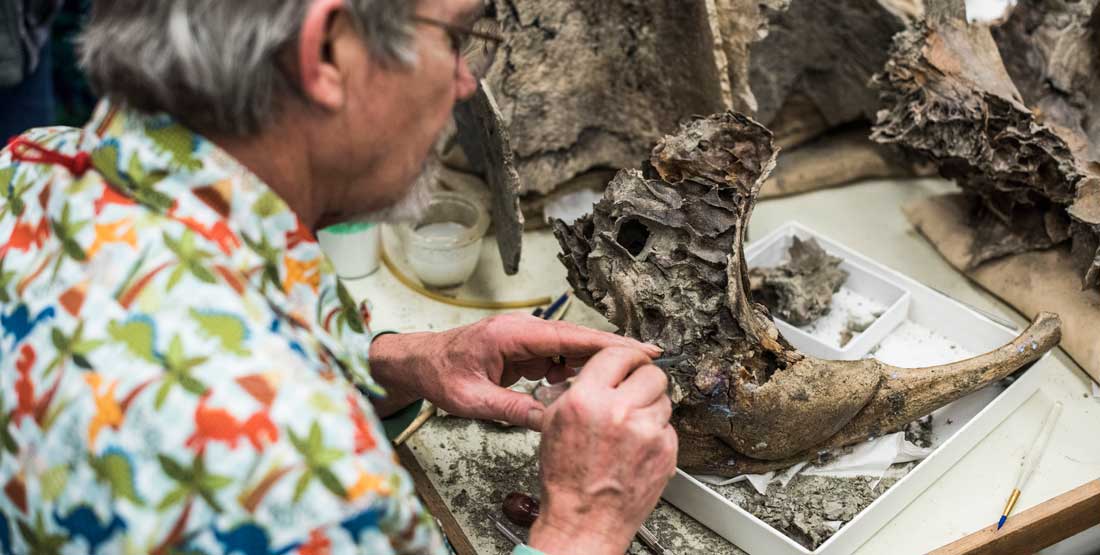 Preparing the mammoth fossil at the Burke Members' Behind-the-Scenes Night.