In 2007, archaeologists from Northwest Archaeological Associates in Seattle excavated an ancient residential site in the Upper Skagit Indian Tribe’s territory in the North Cascades, near the modern town of Hamilton, Washington. This unusually large site, called the “Hamilton site,” yielded over 60,000 artifacts and dates from 2,300 to 1,900 years ago. 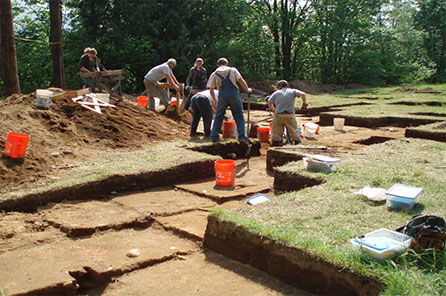 Excavation at the Hamilton site. 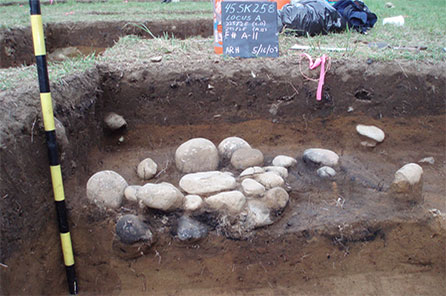 An excavated hearth at the Hamilton site.

Archaeologists used a method called radiocarbon dating to determine this window of dates. Radiocarbon dating measures how much carbon-14 remains in things that were once alive in order to estimate how old they are.

Excavations at the site unearthed the remnants of nine hearths, and these hearths included pieces of ancient meals, such as burned mammal, bird and fish bones, as well as plant remains like berries. Samples of some of these materials were radiocarbon-dated, allowing archaeologists to estimate the year in which these materials were harvested, cooked, and eaten by the ancient inhabitants of the site.

It’s difficult to describe the awe I felt when I first looked upon and held these stone tools made by our ancestors two thousand years ago; it’s humbling to know the technology and superior skills required to produce such amazing tools…

Unearthed stone and bone tools from the Hamilton site also help illustrate Upper Skagit traditions, which stretch back thousands of years. Examination of these tools provides details about how people lived, hunted, fished and traded in the North Cascades. For example, all the excavated fish bones came from salmon, highlighting the great importance of salmon fishing to the ancient people of this area. Other materials like unburned bone, hide, plant fiber and wood were also used, but have been destroyed over time by the area’s acidic soils. 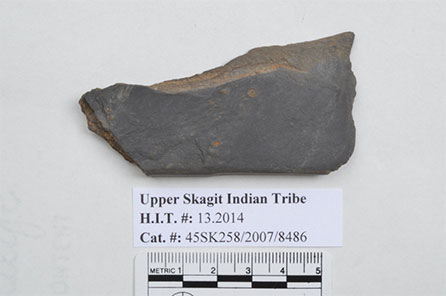 A “tabular knife” tool fragment sampled for residue analysis. Bear and dog proteins were found on this tool. 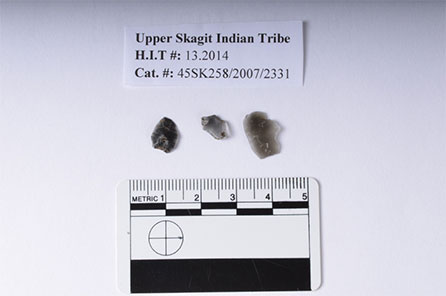 An example of obsidian artifacts used for obsidian sourcing analysis. These were sourced to Obsidian Cliffs, Oregon.

To explore how the recovered stone and burned bone tools were used, archaeologists tested some of them for traces of chemicals such as fats or proteins, which can remain as residues stuck to the surface of tools used for cutting, hide scraping, or other purposes.

Because different plants and animals leave behind different fat or protein residues, this type of residue analysis can show which plants or animals were processed using these tools. At the Hamilton site, some of the tools had surviving residues, which show that they were used to process multiple animals, including bear, dog, and rabbit.

Many other artifacts found at the Hamilton site were made of obsidian, a special type of volcanic rock which was highly-prized for making stone tools due to the fact that broken obsidian is as sharp as surgical steel.

Modern archaeologists can chemically match each piece of obsidian to the volcano where it was originally quarried through a process called obsidian sourcing, and this helps archaeologists understand where ancient people got their toolstone, as well as how far this toolstone was carried before it was made, used, and discarded. At the Hamilton site, obsidian sourcing showed that much of the obsidian found at the site was carried hundreds of miles from central Oregon, highlighting the extensive trade networks used by its ancient inhabitants.

Ongoing work at the Burke Museum

The archaeology staff at the Burke Museum is currently working on behalf of the Upper Skagit Indian Tribe to help preserve the Hamilton collection so that this important ancestral record is available to future generations of tribal members and researchers.

Our current work involves cataloging and providing archival-quality housing for every artifact and document produced by the 2007 excavation. Eventually, this collection of artifacts and documents will be returned to the Upper Skagit Indian Tribe.

Learn about the unique quality of Huckleberries gathered near Mount St. Helens and how to make them into delicious muffins with Burke Museum Tribal Liaison Polly Olsen (Yakama).