As Halloween approaches, bats can be found everywhere from costumes to decorations. But during the rest of the year, bats are frequently under-appreciated and overlooked.

Washington state is home to 15 species of bats, and yet not much is known about these mammals and their distribution. Along with their amazing biological adaptations, bats perform a variety of important ecological roles. Bats are a primary predator for nocturnal insects, many of which are crop-destroying pests. The health of many of our ecosystems depends upon the wellbeing of bats.

Habitat or land fragmentation occurs when habitat loss creates smaller, divided areas of land. Often this is a result of human activities, like agriculture, urbanization and pollution. While usually considered less susceptible to the perils of habitat fragmentation because of their ability to fly, bats remain at risk to the loss of their resources and environments to land fragmentation.

Rochelle Kelly, a Burke Museum and University of Washington graduate student, studies bat species in the naturally fragmented environment of the San Juan Islands. Kelly works with Dr. Sharlene Santana, Burke Museum curator of mammals, to study the diet and natural occurrences of each bat species. Through her research, Kelly seeks to clarify the distribution of, and differences between, bat species in the Pacific Northwest. Specifically, Kelly aims to discover how bats are susceptible to land fragmentation, providing critical information to land managers on how to protect these vital animals.

Spending roughly two to ten nights at each island this summer, Kelly worked to collect data on these wonderfully obscure creatures. Some species, like the California Myotis, have a broad distribution. Others, like the Silver Haired Bat, were more difficult to catch. On Vendovi Island, a rather peculiar incidence occurred that may suggest the island is a male bat “bachelor pad.” Last spring, Kelly surveyed the island and found only male bats. When she returned this summer to catch another 17 bats, she still could not find evidence of any female bats. Kelly wants to determine whether these bats are sexually segregating themselves, and how.

Mist nets were used to catch and release the bats during the nighttime. Kelly is collecting a variety of data about the bats, including DNA samples, fecal samples and audio recordings to listen for calls from all bats in the area—even those who fly higher than the nets can reach.

“In order to accurately characterize bat communities, it is necessary to employ a variety of survey methods because some may underrepresent certain species,” Kelly said.

Sifting through fecal samples requires a keen eye. Kelly extracts insect DNA, and identifies insect parts in the feces under a microscope. By combining these methods, she can determine the insects that different bat species prefer to eat. By analyzing the distribution and diet of these bat species, Kelly can hopefully determine whether populations are regularly foraging and interbreeding or if certain species reside on islands year-round. “Working on nocturnal, flying mammals has many challenges, including that it’s very difficult to directly observe their behaviors in their natural habitats,” Dr. Santana said. “Therefore any new ecological information we can generate is of great value for understanding the biology of these animals”

When land fragmentation occurs, species might become geographically separated from other species with whom they compete for scarce resources. Subsequently, some species may be able to expand their diet on remote islands lacking competitors, because they can access a broader range of food resources. Information on both diet and distribution is pertinent to understanding how susceptible certain bat species are to the perils of habitat fragmentation.

Thanks to the contributions of organizations like the San Juan Preservation Trust, San Juan County Land Bank, Washington State Parks, the National Park Service, the US Fish and Wildlife Service, and the Department of Fish and Wildlife, Kelly was able to collect the data she requires to search for these answers. In the next year, Kelly will be analyzing additional samples in the lab, and taking additional field trips to the San Juans this upcoming summer. These efforts are helping solve the mystery of where bats live and interact with their environments, providing key information to help make sure they are here in the future.

The public can talk to Kelly about her research with these bats, and also see how bat specimens in the Burke’s collection add to our knowledge about these elusive creatures at the Burke Museum’s annual Meet the Mammals event on Saturday, November 14, 10 am – 4 pm. The day also includes hundreds of other mammal specimens from the collections to see and touch, mammal-themed crafts and photo booth, and more. For more information about Meet the Mammals, go to www.burkemuseum.org/calendar.

For high resolution images and for interviews with Rochelle Kelly or Sharlene Santana, please contact burkepr@uw.edu. 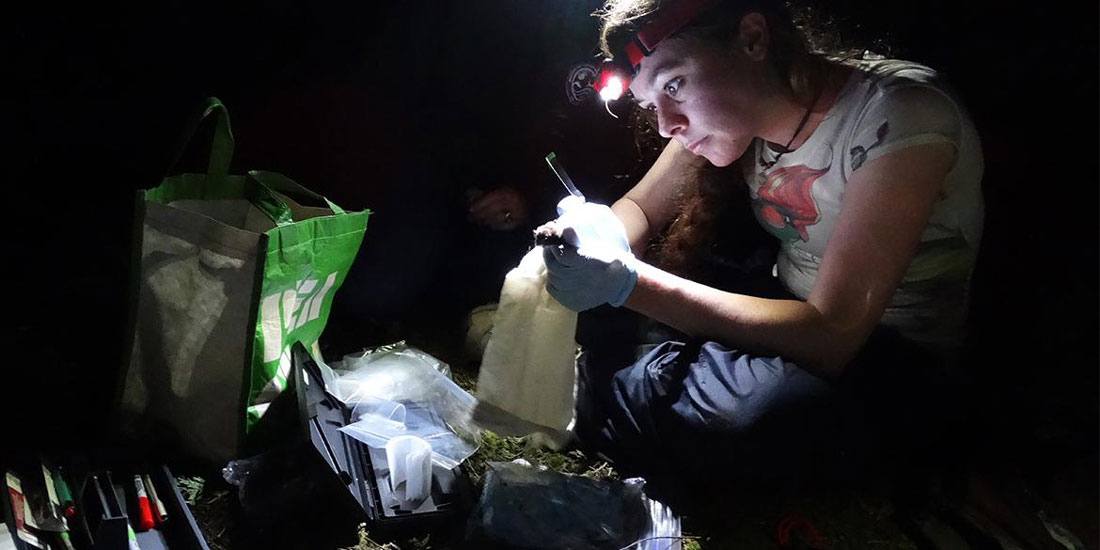 Rochelle Kelly collects DNA samples from a bat before she releases it. 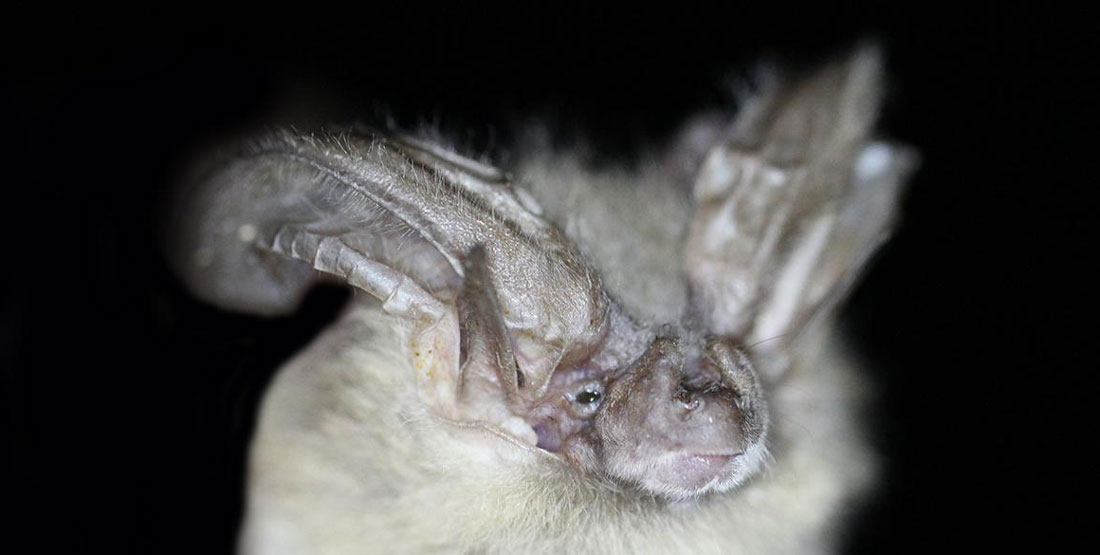 The Townsend’s Big-Eared Bat is one of the San Juan Islands species Kelly is studying.