Encoded in the weave: Identifying your relative’s Native American basket

Amidst the many hours devoted to research papers and projects during my graduate schooling, I became very intrigued with historic photographic images of Native American cultures. As these images filled my moments of contemplation and my laptop’s hard drive, a fire was set alight within me to explore the handicrafts produced by the Native hands depicted in these historical photographs.

Each day as I walked through the Burke’s Pacific Voices exhibit en route to class, I became more and more enamored with the beautifully crafted and lustrous twined basketry works on display. But these baskets were completely enigmatic for me…how were they made, and how could one differentiate between the baskets of various Northwest Coast cultures? 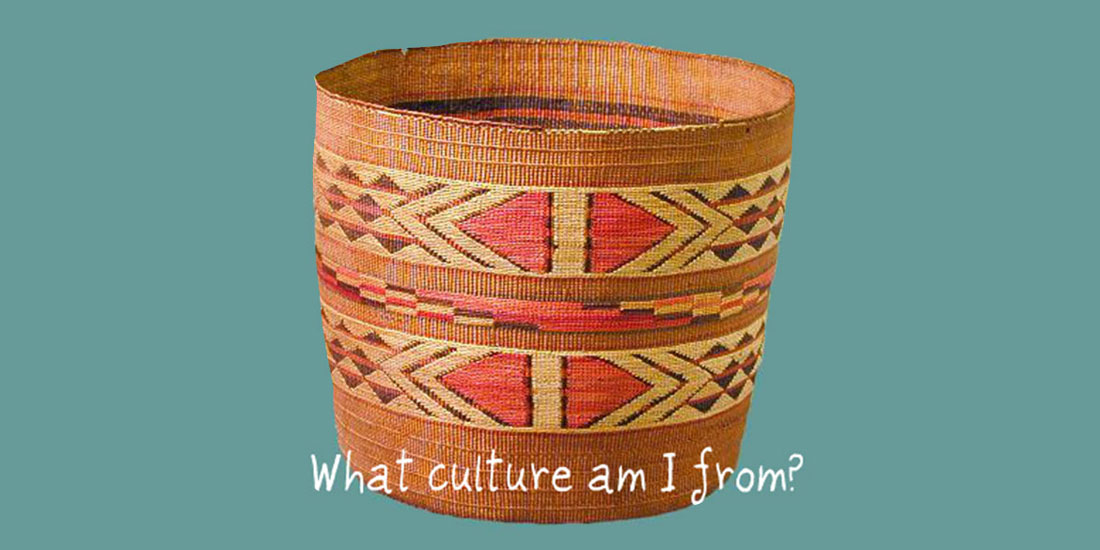 So I want to shed light on some of the greatest differentiating characteristics between the spruce baskets of two neighboring cultures from the northern Northwest Coast—the Tlingit (pronounced “TLINK-it”) of what is now southeastern Alaska, and the Haida (pronounced “HIGH-dah”) of the Haida Gwaii (or Queen Charlotte Islands) of British Columbia as well as the southernmost portion of Alaska’s Prince of Wales Island (See a map here).

The Woven Worlds of the Tlingit and Haida

The collecting of Native American baskets across America was earnestly advertised during the last decades of the 19th through the early 20th century in journals and newspapers alike, with one writer of 1891 calling the accumulating craze “the latest fad among artistic people.”*

Despite the introduction of new basketry forms and design motifs with the development of a white tourist-fueled industry, the women of both the Tlingit and the Haida—who bore sole responsibility for the gathering of materials and the weaving of basket works—remained faithful to their native weaving techniques and materials. The Tlingit and the Haida shared in their artful manipulation of split root derived from the spruce tree (referred to as “seet” by the Tlingit) to produce exceptionally vocal woven basketry creations.

The body of their baskets—most commonly in the form of open, gradually flaring cylindrical berry-picking baskets—were intricately formed by means of twined weaving techniques: fine strands of peeled and split spruce are manipulated, the lustrous outer part of the root utilized for the strands to be visible on the exterior basket (known as wefts) are woven horizontally in a variety of techniques over passive vertical strands derived from the center of the root (known as the warps, and in most cases concealed in totality by the wefts).

The most customary twined weaving stitch was the plain (or two-strand) Z-twining stitch, asillustrated in the brief video clip below, producing a striking uniform textured surface of vertical ridges akin to an ear of corn. The “Z-twining” refers to the direction of each stitch’s slant down to the right.

Overlapping construction techniques and weaving materials can easily mislead one to associate the incorrect culture with a basketry treasure; however, outlined below I detail the greatest idiosyncrasies that can aid in distinguishing between the major basket types of the Tlingit and the Haida.

Favored as the most consistent telltale sign for differentiating a Tlingit basket from a Haida is the point of termination on a basket, which is visually manifested in a vertical band along one point on the basket wall. At this point of termination where the weft strands are connected to each other, a step in the alignment of the vertical ridges occurs. The angle of this step, referred to as a jog, is reflective of orientation of the basket during the weaving process as mandated by cultural customs.

The Tlingit’s jog configuration (Figure 2) shows a “jog down,” where each row is slightly above the previous (row on left side of termination is higher than the row to the right). This “jog down” is the by-product of the Tlingit’s custom of weaving baskets in an upright position (Figure 3). 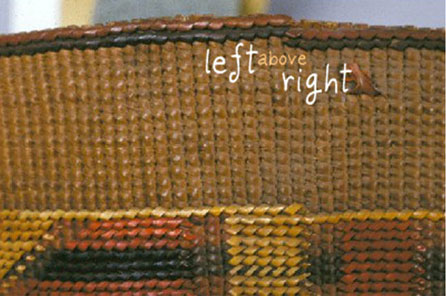 Figure 2: This close-up view of the termination on a Tlingit basket shows the characteristic “jog down” where each row is slightly above the previous. 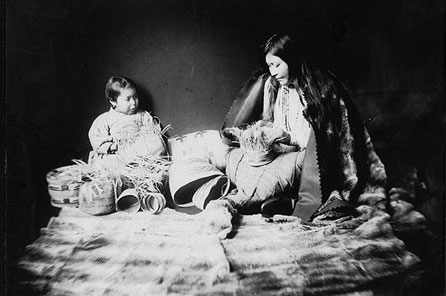 Figure 3: A photograph taken in the early 20th century in Skagway, AK documents the way a Tlingit woman would weave her basket in an upright position.

The Haida’s jog configuration (Figure 4), on the other hand, displays a “jog up,” where each row is slightly below the previous (row on left side of termination is lower than the row to the right). This “jog up” is the outgrowth of the Haida’s custom of weaving baskets in an inverted position (Figure 5). 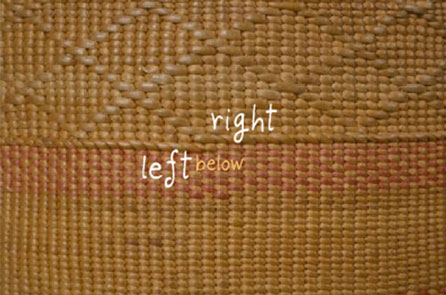 Figure 4: This close-up view of the termination on a Haida basket shows the characteristic “jog up” where each row is slightly below the previous. 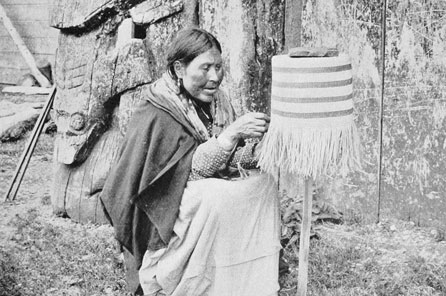 Figure 5: This photograph, taken in the Haida village of Masset in 1897 by photographer Edward P. Allen, displays the customary way Haida woman would weave her basket with the warp strands pointing downward.

The Tlingit and the Haida each possessed a unique set of cultural beliefs that were encoded within the physical form of their basketry works. Each basket maker revealed her individual artistic sense within an established vocabulary of aesthetics and design elements regulated by her people’s vernacular weaving style. While stylistic exceptions do exist as a result of cross fertilization of ideas and techniques due to intermarriage between tribes, as well as a result of tourist demand (hence the importance of examining the termination point on a basket), the following stylistic generalizations can be helpful in establishing a Tlingit basket from a Haida.

The twined basketry works of the Tlingit are typified by the punctuation of boldly colored and Kinely integrated geometric forms that mingle with great variety across the outer wall of the basket, typically within the confines of horizontal design bands. Customarily on variations of berry baskets these colorful design motifs were woven over three horizontal bands that encircle the form—two wider and matching bands sandwiching a third smaller “tying band” in the middle—that are bookended by margins along the top rim and base of the basket of non-dyed spruce root (See Figure 1).

Many of the design motifs symbolically represent in abstracted form natural subjects, but, after 1880, also were literally transcribed from ornamental blankets and fabrics acquired through trade with white settlers. The Technicolor geometric form decoration was applied by a weaving technique known as false embroidery in which pre-prepared colorfully dyed grass strands or maidenhair fern strands (known for its reddish to blackish purple hue and glossy appearance) are wrapped simultaneously with the horizontal weft strand as it is woven over the vertical warp.

The false embroidery never passes to the inside and can only be viewed on the exterior wall of the basket. Noteworthy as well is that the colorful strands of false embroidery slant in the opposite direction of the plain z-twining that structurally deKines much of a Tlingit basket (Figure 6). 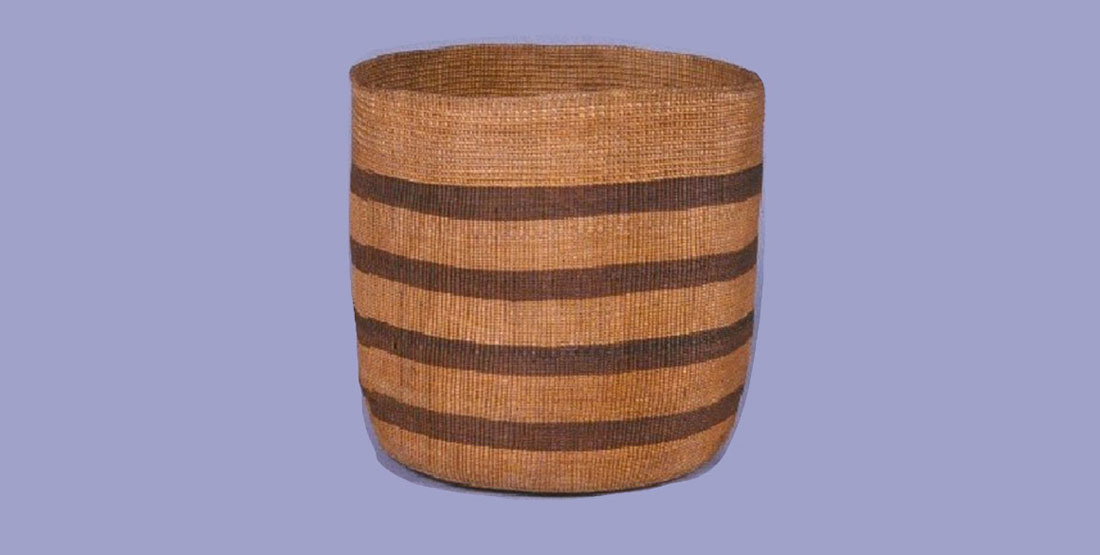 Figure 6: Tlingit’s characteristic false embroidery technique. Each stitch of the colored strands slants up to the right—the opposite direction of the natural spruce root plain z-twining.

Specimens of Haida basketry are markedly more understated than that of the Tlingit in design and color choices. The power of Haida twined creations come from the restrained bands circumventing the basket’s wall, and typically from subtle shifts in weaving techniques that appear in a band along the basket’s rim.

The narrow horizontal bands around the basket—which typically are black, green or brown in color, but also occasionally red—are created by dying some of the spruce root weft strands prior to weaving and incorporating them directly into the ‘fabric’ of the basket with plain z-twining (Figure 7). The understated elegance of Haida baskets is also typically typiKied by a thicker horizontal band of skip-stitch (or twill twining) present along the basket’s rim that produces a raised geometric design, as seen in Figure 4.

To learn more about Tlingit and Haida Spruce Root Baskets: