Seattle―Hummingbirds are some of the most specialized creatures alive today. These nectar-eating birds have unique, long beaks, and are the only birds that can fly backward and upside-down. Hummingbirds are well-loved by many who have seen them feeding off of flowers―or hummingbird feeders―in our backyards and neighborhoods. But how do the beaks, tongues, wings, and other specialized anatomy of hummingbirds function? How did these birds evolve to what we see today? And what do these important pollinators do for the ecosystems we all depend on?

Dr. Alejandro Rico-Guevara studies these remarkable birds and joins the Burke Museum as the new Curator of Ornithology. His research focuses on how the physiological, anatomical, and behavioral aspects of hummingbirds drive their evolution and the relationships they have with the ecosystems in which they live. In partnership with behavioral ecologist Dr. Kristiina Hurme, who is joining UW Biology as Instructional Faculty, they will establish the Behavioral Ecophysics laboratory, aimed to link the rules of life to physical principles. They will combine cutting-edge research methods with high-tech imagery―such as creating computer-controlled flowers and filming with high-speed cameras that capture hummingbird feeding and flying techniques―to study these fast, tiny creatures in the wild. 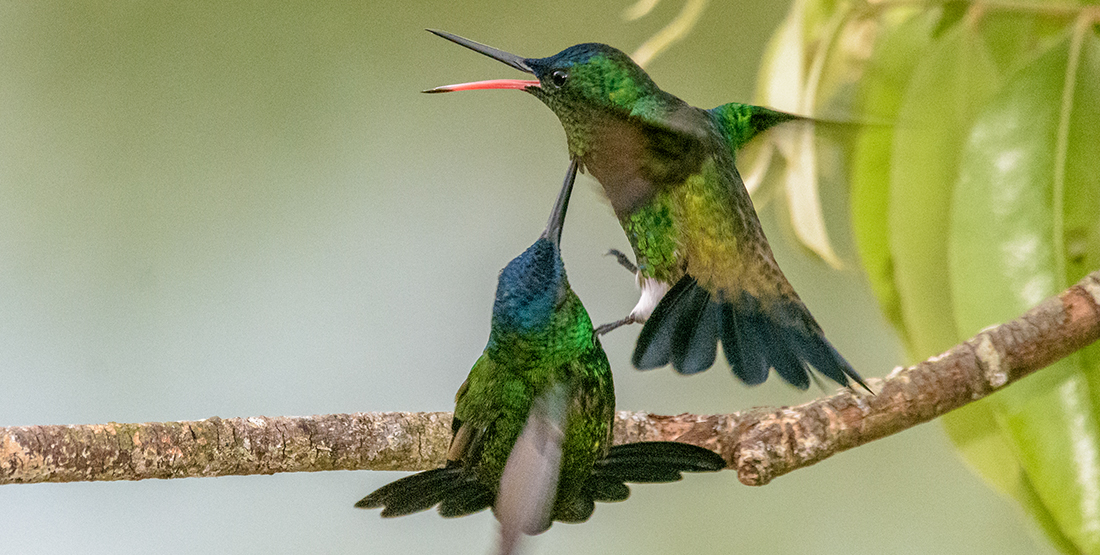 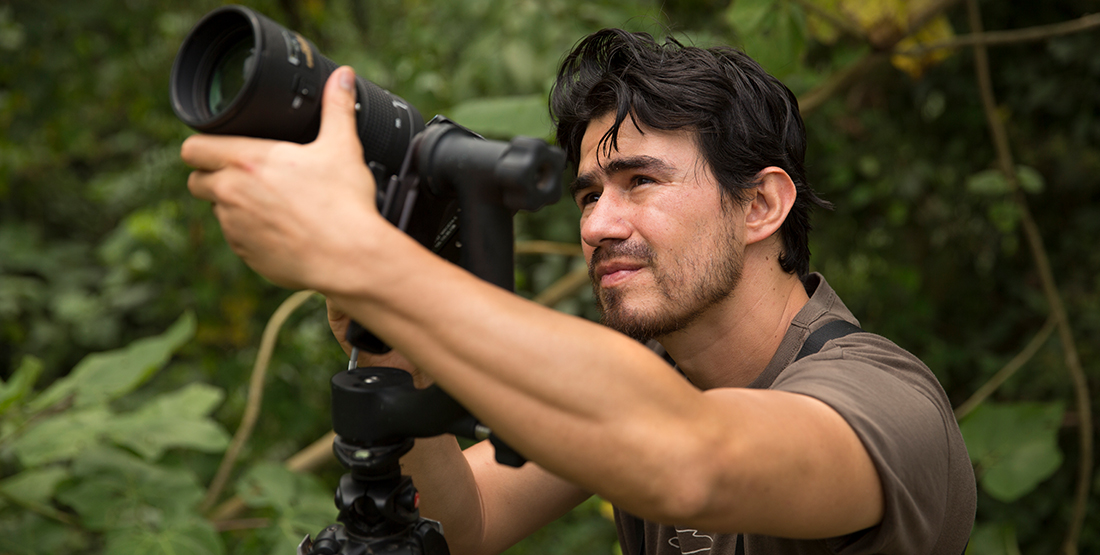 Dr. Alejandro Rico-Guevara is the new Curator of Ornithology at the Burke Museum and is world renowned for his research of wild hummingbirds. 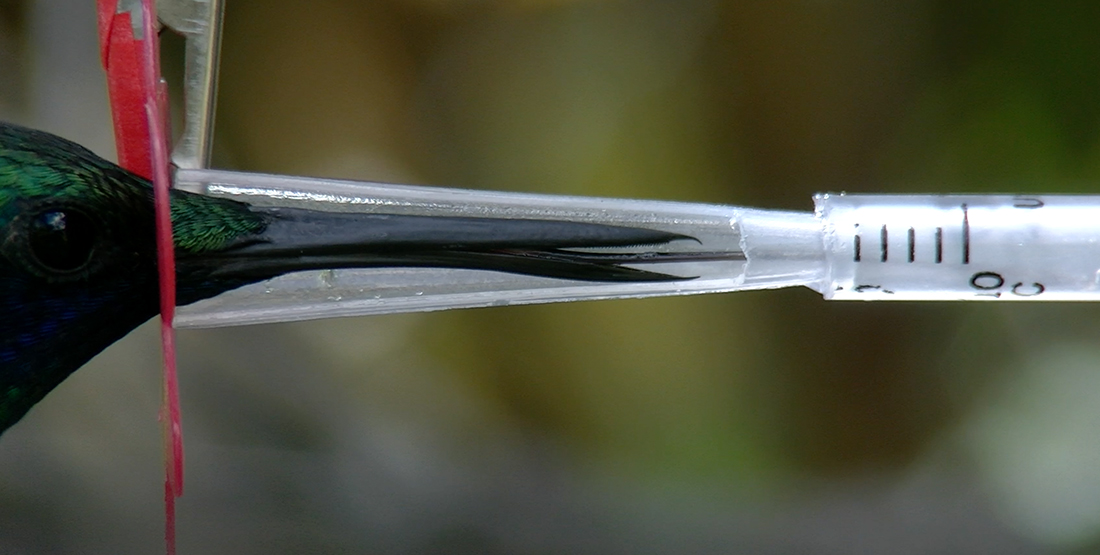 A still image taken by a high speed camera shows a Sparkling Violet-ear (Colibri coruscans) with bill weapons using its tongue to feed from a fake flower. 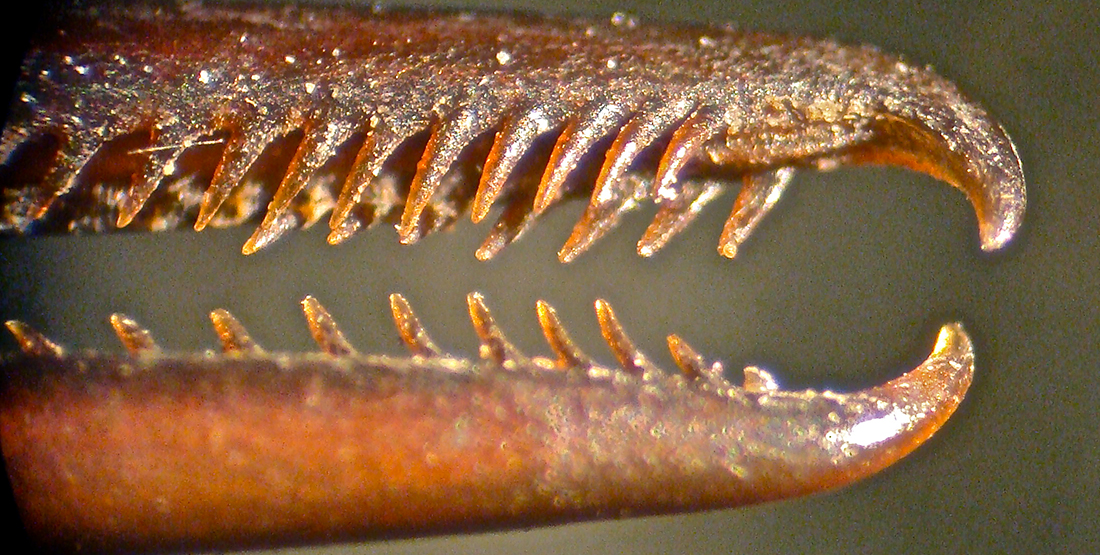 Dr. Rico-Guevara is a biologist from the Universidad Nacional de Colombia, with a PhD from the University of Connecticut supported by Fulbright, and a postdoc research position as a Miller Fellow at UC Berkeley. He received the Pitelka Award for excellence in research by the International Society for Behavioral Ecology, the Outstanding Student Paper Award by the Organization for Tropical Studies, and the Best Doctoral Dissertation Award by the UConn EEB Department. He is the author of 20 peer reviewed publications, 16 as first author.

“I firmly believe that as biologists we have both the privilege to learn about the wonders of nature and the responsibility to share what we have learned not only with other scientists, but, perhaps more importantly, with the wider community,” Dr. Rico-Guevara said.  Since 2011, several of his papers have been featured by news media (New York Times, NPR, National Geographic Magazine, and others), and his research has been highlighted in five nature documentaries/TV series.

His curatorship at the Burke is a joint position, where he works half-time at the museum, and half-time as an Assistant Professor at the University of Washington Biology Department. His position officially starts December 1, 2019. Dr. Rico-Guevara is the 13th curator at the Burke and is joining Dr. John Klicka as the second Curator of Ornithology, and he will be appointed as the first Walt Halperin Endowed Professor of Biology.

“To me, science communication is one of the most important aspects of being a researcher, and it encompasses reaching as many diverse groups as we can; for instance showing kids all the cool things in nature and how to take care of them, and also highlighting the importance of scientific endeavors to everyone involved in societal decision-making,” Dr. Rico-Guevara said. “At the Burke, I will do my best to do great science, and to disseminate it as broadly as possible, taking advantage of the dynamic exhibits and the behind-the-scenes for all design.”

Research projects Dr. Rico-Guevara will launch at the Burke Museum include strengthening the ornithological collections (boosting the largest spread wing collection in the world) through international partnerships, as well as projects on aerodynamics, aggressive displays, energetics, and sexual selection of hummingbirds. In addition, he plans to take advantage of UW Biology’s strengths on CT scanning to contribute to open access projects such as oVert and explore novel high-throughput methods of 3D external reconstruction (e.g. macro photogrammetry in alive organisms) of particular structures such as bills and wings.

“With their enchanting appeal and unique physical capabilities, hummingbirds captivate people of all ages,” Dr. Rico-Guevara said. “As such, they serve as ambassadors to the natural world, which can foster public appreciation for scientific and conservation efforts aimed at preserving these fascinating birds, and the biodiversity upon which they depend.”

I'm Alejandro Rico-Guevara. I'm the new Curator of Birds at the Burke Museum and an Assistant Professor at the Department of Biology. I went to Berkeley to do a postdoc as a Miller Fellow on the flight lab. So I studied aerodynamics of hummingbirds.

Then in the University, I had the opportunity to work with Gary Stiles. He's an American that moved first to Costa Rica and then to Colombia to study hummingbirds because that was his passion. So he infected me with that passion.

So my research is tied to collections in many different ways. Here at the Burke, there's so much diversity in terms of not only the specimens the different birds that they have...hummingbird species. But also the type of specimens.

I'm especially interested in working with the spread wing collection. Which is the largest in the world. And the largest for hummingbirds too. Because we want to understand how the wing shape changes with all of these different lifestyles.

I'm very excited to be here because of the new design of the building is to have real windows for the people to see how science happens. And this research that I perform with the wings, with the resconstructions, with studying the morphology is a great way to show people tangible forms that they can understand, that they can see and they can visualize why we got interested in what we're interested.