Building Family from Tragedy: Clean-Up Veterans and the Marshallese Community

This Veterans Day, we honor the "Clean-Up Veterans"—a group of veterans whose experiences are rarely acknowledged or understood.

There are several hundred Clean-Up Veterans alive today who were sent to the Marshall Islands between 1977 and 1980 as part of their military service to construct a plutonium containment facility on Enewetak, one of the ground zero atolls. As individuals in their teens and early 20s, many of them worked inside the craters of detonations without any protective equipment, wearing only shorts and no shirts. For those who are still alive, most experience incredible health challenges.

The U.S. Veterans Administration acknowledges "Atomic Veterans" as a group of veterans who were exposed to radiation from nuclear detonations as part of their military service, and as a result, require specialized healthcare. "Clean-Up Veterans" are not acknowledged as a distinct subset of veterans, and are not considered Atomic Veterans because their exposure to radiation came from cleaning up radioactive areas resulting from military activities as part of their military service, not from their presence during nuclear detonations.

Nuclear testing in the Marshall Islands

From 1946 to 1958, the U.S. Government tested at least 67 nuclear weapons in the Marshall Islands, including the Bravo, which was 1,000 times more powerful than the bomb dropped in August 1945 on Hiroshima, Japan. Much of the plutonium used in these nuclear weapons came from the Hanford processing facility in central Washington.

Of the tests done in the Marshall Islands, 43 were conducted at Enewetak, where the Clean-Up Veterans were sent to contain the resulting radiation and to make it safer for the local population. During the testing, the U.S. Government relocated the people of Enewetak to a Navy ship in the open ocean for three months, as well as to Ujelang, a nearby atoll, where they experienced hunger and other adversity.

After the Clean-Up Veterans constructed the Runit Dome to contain radiation, the U.S. Government declared that Enewetak could be resettled by the Marshallese people. There are resettled populations on Enewetak living close to the Runit Dome who remain concerned about residual radiation and other toxins on their home islands. 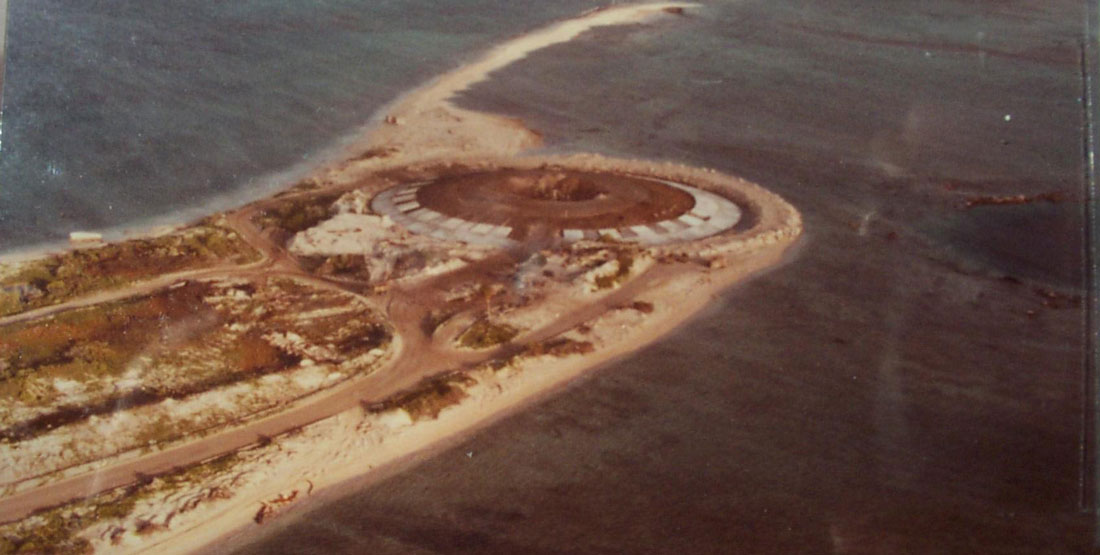 The Clean-Up Veterans helped to construct the Runit Dome to contain radiation.

Decades after the people thought the environment had been "cleaned" by the U.S., the U.S. revealed that only 1% of the plutonium from the nuclear tests is contained in the Runit Dome and 99% of it is in the lagoon and on the islands. The Clean-Up Veterans have been critical in providing important information to the Marshall Islands leadership about contamination on the islands, information that the Republic of the Marshall Islands (RMI) Government never received from the U.S. Government—information the resettled Marshallese community never knew.

Marshallese community members who have cancer and other illnesses connected to exposure to the plutonium that was processed in Hanford are now coming to Washington state for medical care that is not available in the RMI.

Through all of this, Clean-Up Veterans and members of the Marshallese community have built a close family from their shared tragedy, looking to each other for support and friendship. 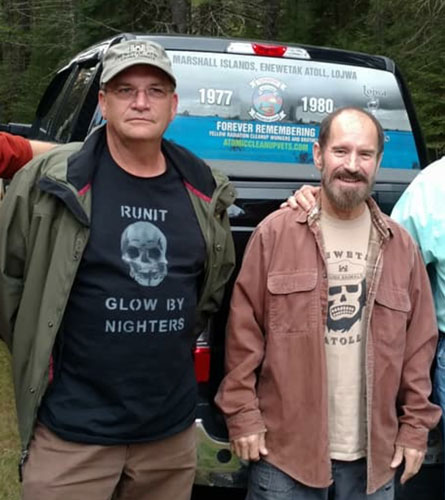 "I served in the US Army. We were sent to the Republic of the Marshall Islands to clean up the most contaminated islands in the world from the United States Government testing of 43 nuclear bombs that released radiation that may be there for a few thousand more years! Many of us have become sick and many more have died from their exposure to the radiation and toxins that we were exposed to in our military service during the cleanup. But our government refuses to admit that we were exposed and recognize us as radiation exposed veterans so the Veteran's Administration will accept us and treat us for our ailments and compensate our families for their losses. This man in the picture with me was taken too soon from his exposure and his family and brothers miss him! RIP brother!!" 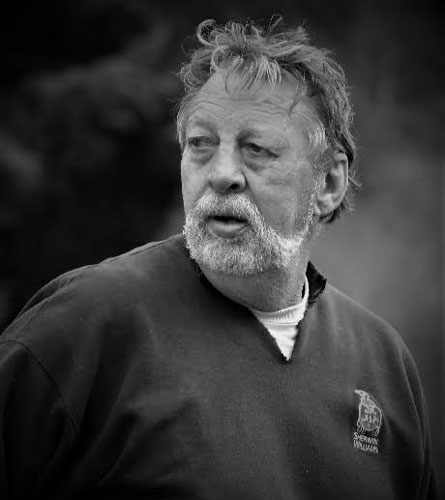 "In 1977 the military sent the Army engineers in to clean up the mess left by the U.S. Government after testing 43 nuclear weapons. Although the numbers of men participating in this humanitarian mission varies from 4,000 men to 8,000 ...those who lived and worked on the islands are now less than 500 still alive. Our cleanup mission failed to clean the islands, and like the Marshallese people we have suffered great losses. Our world has suffered from the effects of nuclear testing, our children and our children’s children will inevitably be affected by the reckless actions by the government. This needs to end!" 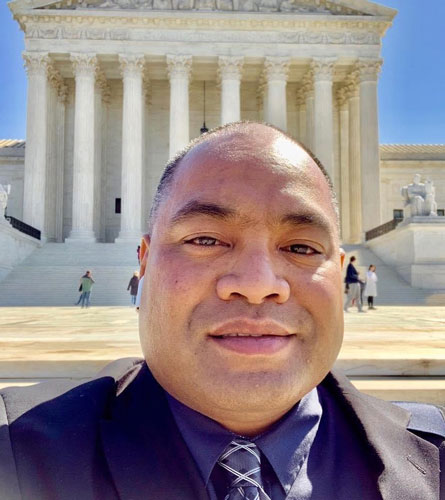 "I'm excited of this relationship that's flourishing between the Clean-Up Veterans and the Marshallese people. No one ever imagined that an atom would connect us together to have such an amazing brotherhood and sisterhood these days. Considering all that has taken place since the race to see who's the "1st world country." To now this creation of a unique relationship between Clean-Up Veterans and COFA islanders from the Marshall Islands. All of it is just in the potter's hand.

From the COFA Alliance National Network of Washington we wish to thank all service men and women by saying Happy Veterans Day! A huge special Kommol tata or thank you to all 4,000 plus brothers who came to the Enewetak: Enjebi, Runit, Lojwa, atoll in the late 70's to take on the mission impossible—cleaning up the nuclear wastes and debris—the Clean-Up and Atomic Veterans. To this day, only you and the people of the Marshall Islands will forever live and suffer from the generational scars of radiation diseases as a result of the 67 nuclear weapons tested by the United States government in the Pacific. To this day, our land is your land, and your home is now our home. We're family and we should take care of each other as family so often do. Peace be upon everyone; May everyone one find peace. Happy Veterans Day!" 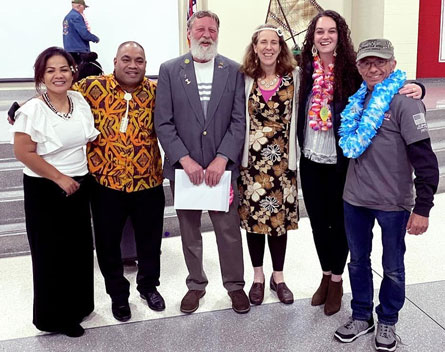 "Their experience cleaning up radiological waste in the Marshall Islands intersects powerfully and painfully with the experiences of the Marshallese. There is a beautiful friendship between the communities emerging from the shared need for healthcare and recognition. Like the Marshallese, the Clean-Up Veterans have absolutely fallen between the cracks of peoples' awareness, but also as a subgroup of veterans that deserve attention and support." 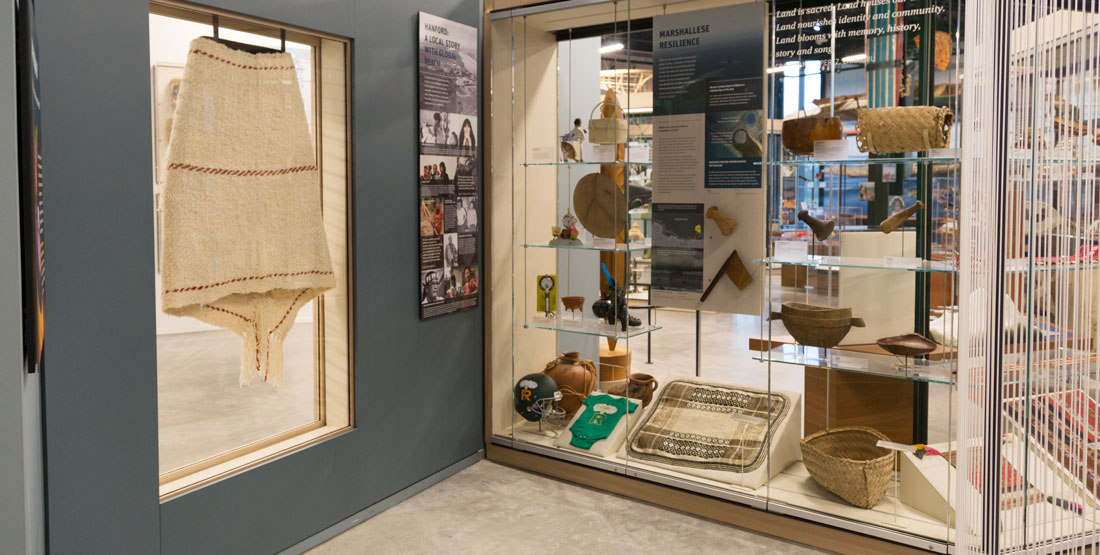 This panel, Hanford: A Local Story with Global Reach, is a new addition to the Culture is Living gallery at the Burke Museum.

The Hanford plutonium processing facility, located in Central Washington, was a part of the Manhattan Project to build, test, and deploy nuclear weapons. Plutonium processed at Hanford fueled the bomb dropped on Nagasaki, Japan, as well as dozens of experimental detonations in the Marshall Islands, New Mexico, and Nevada in the years following World War II.

Hanford has always disproportionately affected communities of color and these communities continue to feel these effects today. A portion of the uranium that was processed at the plant came from the Spokane Tribe's Land, and the U.S. Government moved the Yakama, New Perce, Umatilla, and Wanapum Tribes off their ancestral lands to build the Hanford facility along the Columbia River. Thousands of Native Americans were forced to relocate without any compensation, cut off from the ancestral lands they relied on for food, medicine, and ceremony.

Hanford and the nuclear era are not just history or issues of the past—the communities who experienced these weapons live with intergenerational health and environmental impacts.

The Burke is committed to amplifying, uplifting, and stopping the erasure of the stories that are not often included in our understandings about Hanford and the role it plays in Washington state or in the nuclear era. The newly-installed panel in the Culture is Living gallery at the Burke invites visitors to consider the myriad ways Hanford and the nuclear era has affected communities in Washington and around the world.

Want to learn more about this topic? We've compiled several resources from outside of the Burke Museum that may also be of interest.

How the U.S. Betrayed the Marshall Islands, kindling the next nuclear disaster (Los Angeles Times)

The Toxic Legacy of a Deadly Paradise (Austrailian Broadcasting Corporation)

Lojwa Animals: Do Not Forget the Forgotten

Special thanks to those who collaborated on this article and shared their stories:
David Anitok, Holly Barker, Kenneth Brownell, and Mark Sargent.