In the Field Mammals Research impact

How hard can a bat bite, and why does it matter? An insect-eating bat needs to eat about one third of its body weight in insects each night to fuel its fast metabolism, and bats with other diets (fruit, nectar, blood, etc.) have similarly high energetic demands. Therefore, biting and chewing foods very efficiently are very important nightly tasks for the survival of most bats. The strength of a bat’s bite roughly determines the kinds and hardness of foods it can eat in nature and thus, we can learn much about bat dietary ecology by studying their bite force.

In my experience, most bats are fierce little animals that do not like being handled by humans. This makes them perfect for measuring the strength of their bites. We do so by using a bite force transducer setup (pictured below). This device is able to register the force produced by a bat as it bites voluntarily; it converts the pull produced by the bite, applied on a tape-covered metal plate, into an electrical impulse that is read by a force amplifier.

In the field, we catch bats and immediately expose them to the bite force transducer, which they bite eagerly. Through this method, we have been able to document many important trends in the bite force of bats. For example, tropical bat species that specialize on very hard fruits, such as figs, are able to consume them thanks to the much higher bite forces that they can generate when they bite with their molar (cheek) teeth. Meanwhile, nectar-eating and vampire bats have very weak bites – their liquid diets have led to losing their ability to bite hard over the course of their evolution. 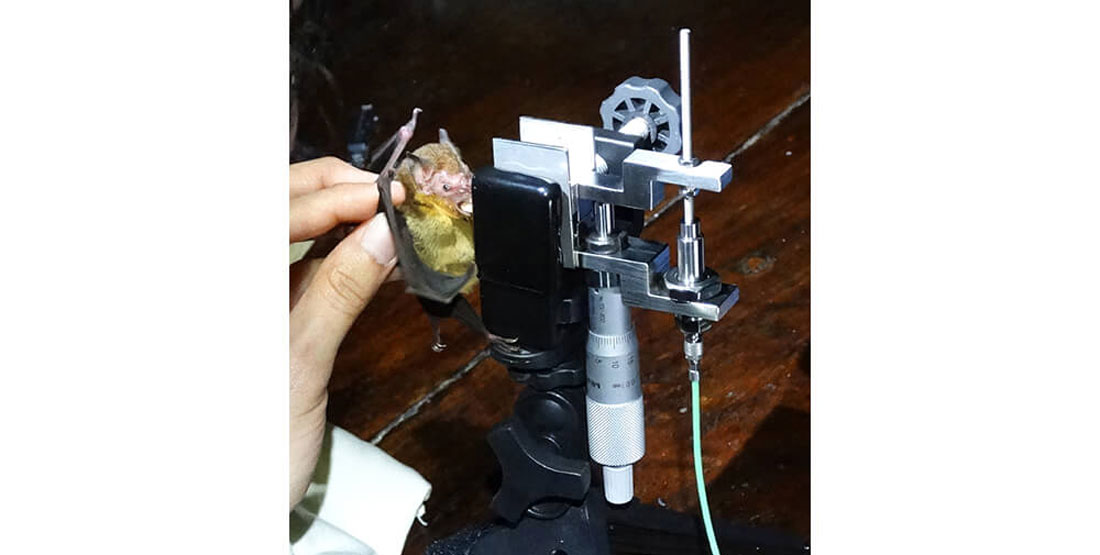 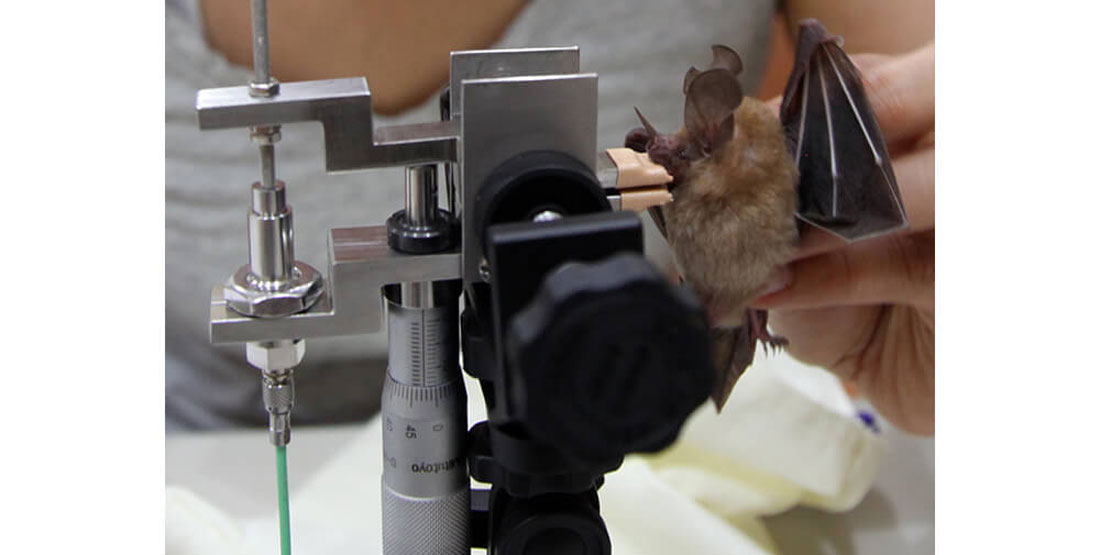 By gathering bite force information across many species and diets, we can go one step further and determine how evolution has shaped the anatomy of bat skulls and jaw muscles as they specialized on different diets. In other words, what about each bat species makes it have a strong or a weak bite? To answer this question, we create computer models of bat skulls and jaw muscles which allow us to first, visualize the anatomical differences across species in great detail, and second, tease apart how differences in each of the anatomical components of the bat head result in differences in bite force.

Creating these models requires some cutting-edge imaging technologies, including the use of micro-Computed Tomography to visualize the cranium and musculature. Through these models we have been able to determine, for example, that the temporalis (below) is the most important muscle in producing bite force, but there is a considerable anatomical variation in the rest of the jaw-closing muscles of bats. 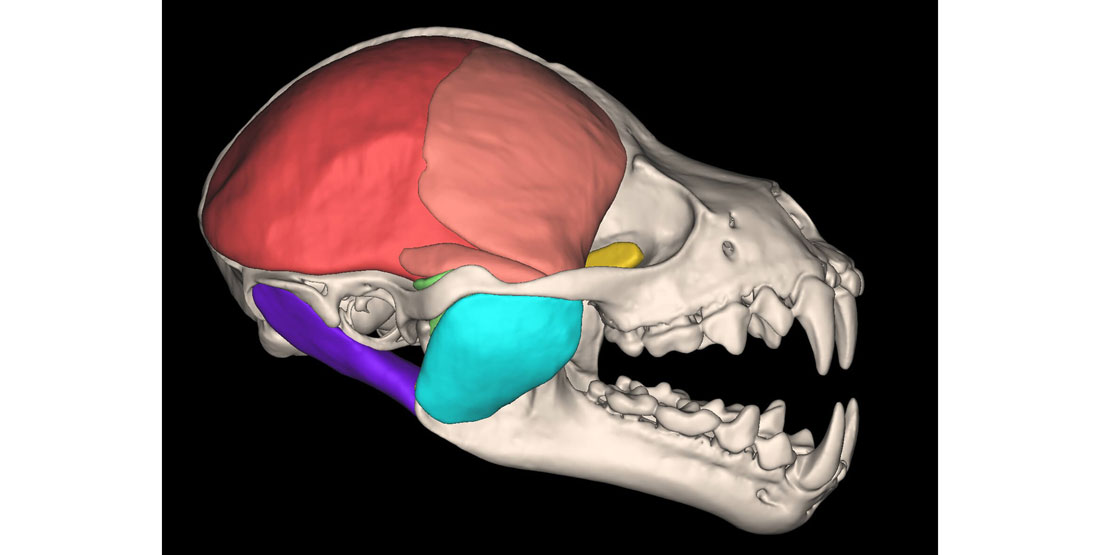 We can further use these computer models to predict the bite force of specimens from our collections, including species that are rarely caught in the field, or even extinct species, and use these data to predict their diets.

By integrating field and computer methods in the study of bat bite force, we have helped understand how these mammals have adapted to consume such astonishingly diverse diets. With over 1,300 species of bats, however, there are still many bat bites to measure. 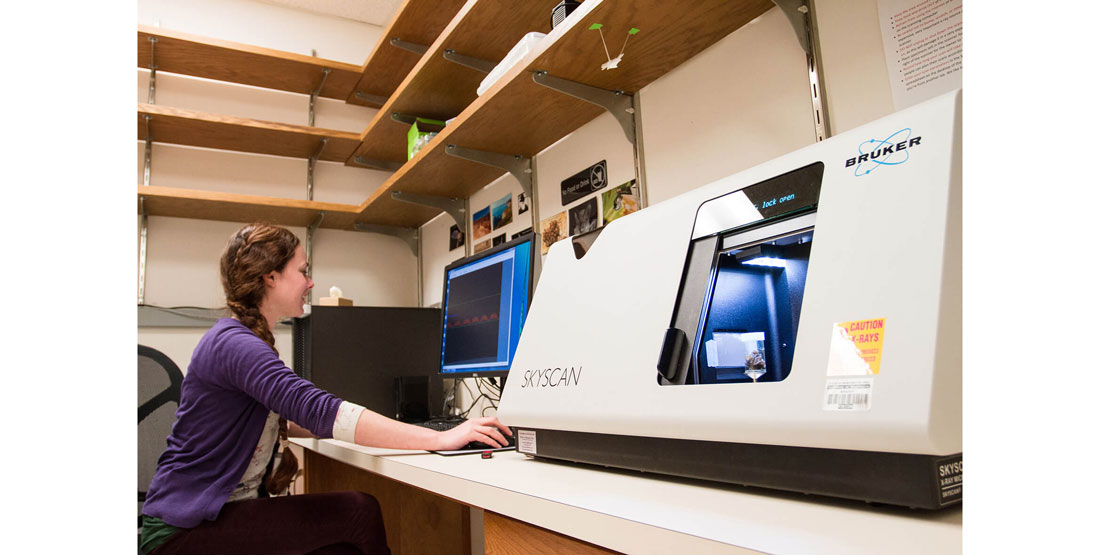