Pursuing a passion at the Burke

It’s hard to remember life without dinosaurs in our house. My oldest daughter Shira was three when we discovered the PBS show Dinosaur Train, and her love for all things prehistoric bloomed. When she was five she was a Wiwaxia for Halloween. It was ridiculous and glorious. I don’t even want to guess how many other five-year-olds were Cambrian invertebrates for Halloween.

When we took her to the Burke, what captivated her most was seeing real paleontologists and volunteers cleaning real fossils. She stood there, transfixed, hands clamped over her ears because the tools were too loud…but to leave was unthinkable.

When I heard the Burke would be preparing the "Tufts-Love" T. rex skull in a visible lab—and cracking the jacket on my birthday, no less—I told my family that what I wanted for my present was a family membership to the Burke. I already was trying to find ways to encourage Shira’s passion, and this was perfect.

From that point, we visited as often as we could. There was always progress and something new to observe. We made our own notes about all the different tools and materials we saw the preparators using. When Shira’s school held a Vocabulary Parade, she put that knowledge to work, creating a wearable preparator’s table and introducing the first and second graders—not to mention the teachers running the event—to a word none of them even knew how to pronounce before she came along.

During one of our visits to the Burke, there was quite a big group of people watching through the windows. Prim, the volunteer working on the T. rex, noticed the size of the crowd and came out to chat with them. Shira had a burning question, but shyness struck and she didn’t want to speak up. Finally she took a deep breath and asked, “What’s the glue that paleontologists use?” Prim looked surprised, as she had not been discussing glue at all, and told her it’s called Paraloid 72. And thus the Prim Fan Club was formed.

The first time the girls got to go into the fossil prep lab, Prim let them use her soft brush to dust away sand and grit—something they both still talk about with pride.

The girls quickly ‘adopted’ Michael, one of the Burke’s fossil preparators, and developed an attachment to “Elvira” (as Prim calls the T. rex).

We recently took a family vacation and visited a beach known for its marine fossils. Shira eagerly packed her Paleontology Kit and set off to scout for treasures. Her sharp eyes zeroed in on one thin, tiny line. With a dental pick and tiny chisel, she set to work and soon freed an inch-long, fossilized shark tooth!

When I posted a picture of Shira’s discovery on Facebook, Michael replied encouraging her to find out what shark it came from, which prompted conversations at home about how to do that: figuring out the time period, researching which sharks would have been in the area at that time. She’s looking forward to solving the mystery and presenting her results to Michael when the New Burke opens.

I can’t properly express the sense of gratitude I feel toward Prim, Michael and the Burke for providing this unique avenue through which my daughter could pursue her passion in this kind of depth. Shira’s interest has exposed both girls to hands-on science and scientists—particularly female scientists.

But I can’t overemphasize this next point enough. No one has EVER so much as acknowledged the sex or gender of any other scientist. No, “See? Girls can be scientists too!” None of the rah-rah, girl-power stuff that plants the seed that other people think girls can’t be scientists. They can, they do, they are. That is the way things are at the Burke. 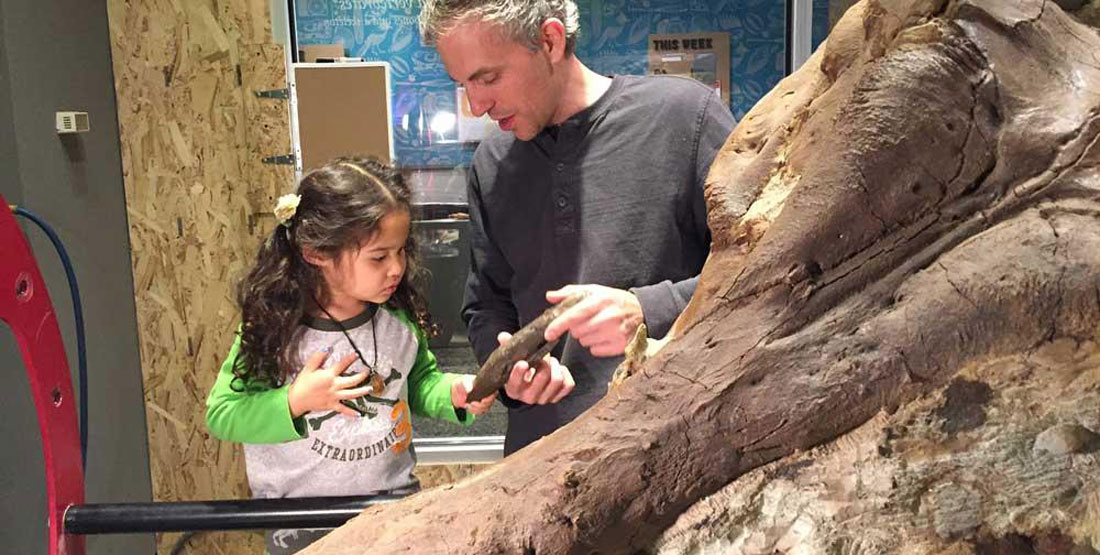 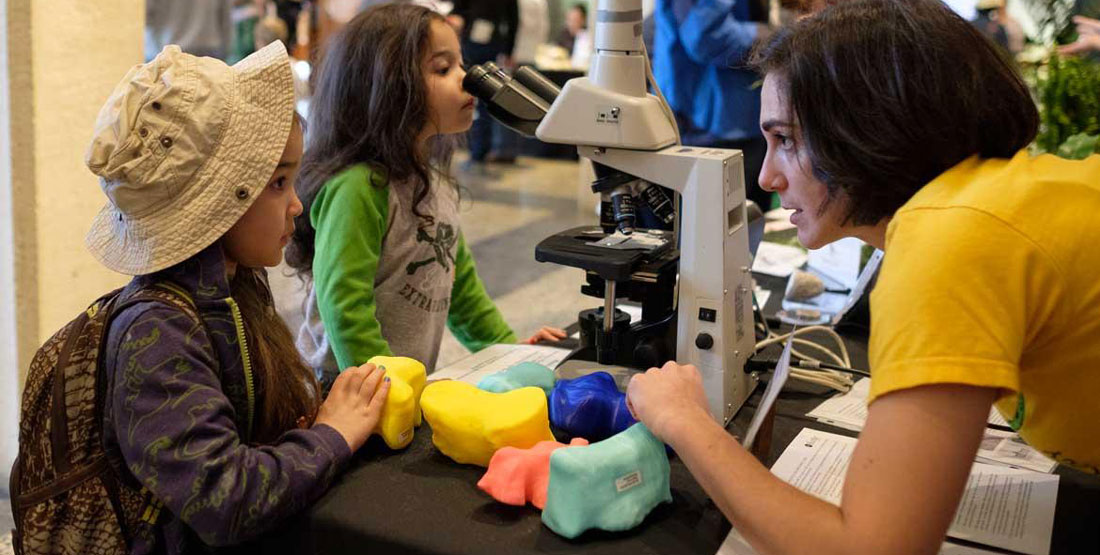 Shira and Meredith take a closer look at the paleobotany table at the 2018 Dinos Days event. 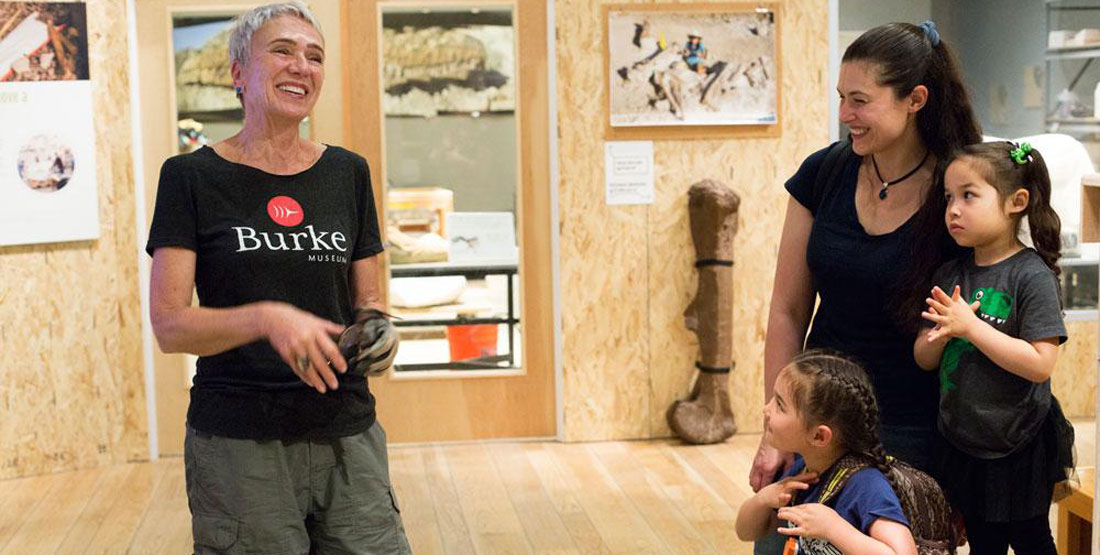 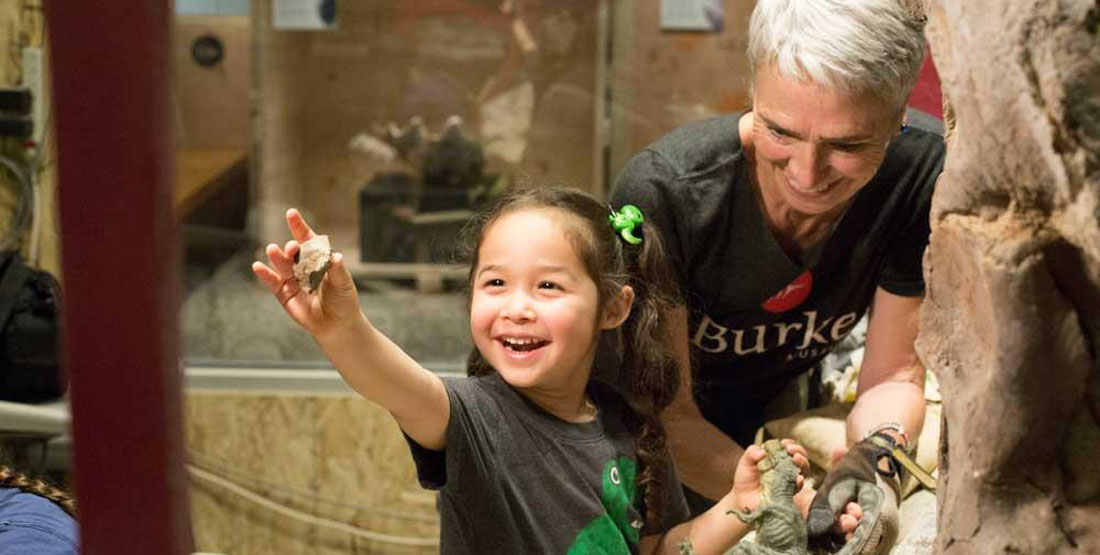 Meredith shows her mom the “hat” she picked for the toy dinosaur as Jean (Prim) Primozich looks on.

At the Burke, my seven and five-year-old girls are taken seriously and treated with respect and friendship by experts in the field. They take this for granted; they have no concept of how rare and special that experience really is.

But with the New Burke opening, with its new exhibits and inside-out design, so many more children will be able to connect with the Burke, and develop their own relationships with the museum and its people, fanning the flames of their interests and curiosity.

Our family can’t wait for the new museum to open in October. Until then, this is what the girls wanted to say: 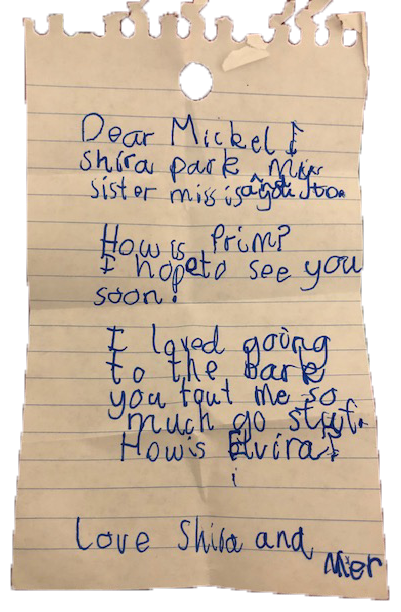 I Shira Park and my sister miss you too.
How is Prim? I hope to see you soon.
I loved going to the Burke. You taught me so much good stuff.
How is Elvira?