For the love of bizarre deep-sea fishes

Imagine a creature in the ocean with huge, gnarly teeth, a protruding dorsal fin spine and the ability to expand its mouth and stomach to consume creatures larger than itself.

“I would have missed out on a lot”

While this may sound like a terrifying deep-sea monster, Dr. Theodore (Ted) Pietsch, Burke Museum curator of fishes and University of Washington (UW) professor, has grown to love them, having spent a lifetime of study on a group of fishes known as the deep-sea anglerfishes.

I recently sat down with Ted in his office at the UW School of Aquatic and Fishery Science building to discuss his history with these fascinating creatures. Like many researchers, Ted started down his particular path thanks to a serendipitous moment and a push from a mentor.

As an undergraduate at the University of Michigan, Ted began studying herpetology to pursue his interest in snakes. While he had high hopes to study under well-known herpetologist, his mentor, famous lizard biologist Arnold Kluge, encouraged him to apply to study under Basil Nafpaktitis, an ichthyologist​ ​at the University of Southern California in Los Angeles. Kluge believed that Nafpaktitis, a new professor at the time who was searching for new students, would provide more opportunities. It turned out to be great advice!

In the summer of 1967, shortly after Ted was accepted to the ichthyology program at USC, he was given the rather unglamorous job of sorting buckets of deep-sea fishes aboard a research vessel. That’s where he caught his first glimpse of an anglerfish.

“Being from the Midwest, I knew what a perch was, but I had never seen these amazingly grotesque deep-sea things before,” Ted remembered. “I went to professor Nafpaktitis and said, ‘What the heck is this?’ and he began to tell me about it... I completely forgot about snakes.”

At the same time that Ted became captivated by these curious creatures, his peers discouraged him from studying anglerfishes because of their extreme rarity. But he would not be swayed! “I couldn’t stop thinking about them,” he explained.

However, this proved to be very difficult because most deep-water fishing gear only went down to about 1,000 meters and the elusive anglerfish tends to be found at much greater depths of 2,000–5,000 meters. 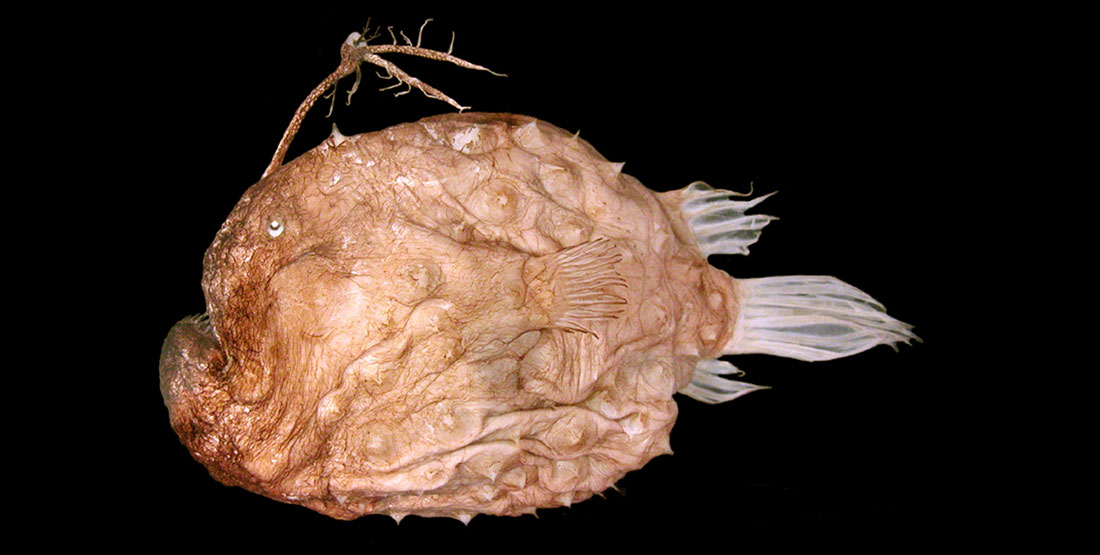 A preserved specimen of Himantolophus-stewarti in the University of Washington Burke Museum fish collection.

“You can go out for weeks at a time aboard a research vessel that fishes above 1,000 meters and you may never get one.” Ted said. And then there’s the risk (and excitement) of hauling in a live anglerfish. “I was bitten by one once.” Ted laughed. “I think that’s a pretty rare thing. I touched this one on the tail, and she zipped around and caught me with her fang-like teeth!”

Still, instead of spending too much time hoping to catch anglerfishes, he elected to visit collections around the world and to “sit and look at what’s in jars.” Well, it’s more than just looking at them—researchers like Ted take measurements and document all types of data, like what the fish ate before its death.

When Ted began his research, there were about 400 named anglerfish species. But once he looked at individual specimens in museum and research collections, he discovered that many of the same fishes had been described and named multiple times. He began to remove the redundancies, and in 1972 he delivered his doctoral dissertation, which narrowed the 400 named species of anglerfishes down to 130. 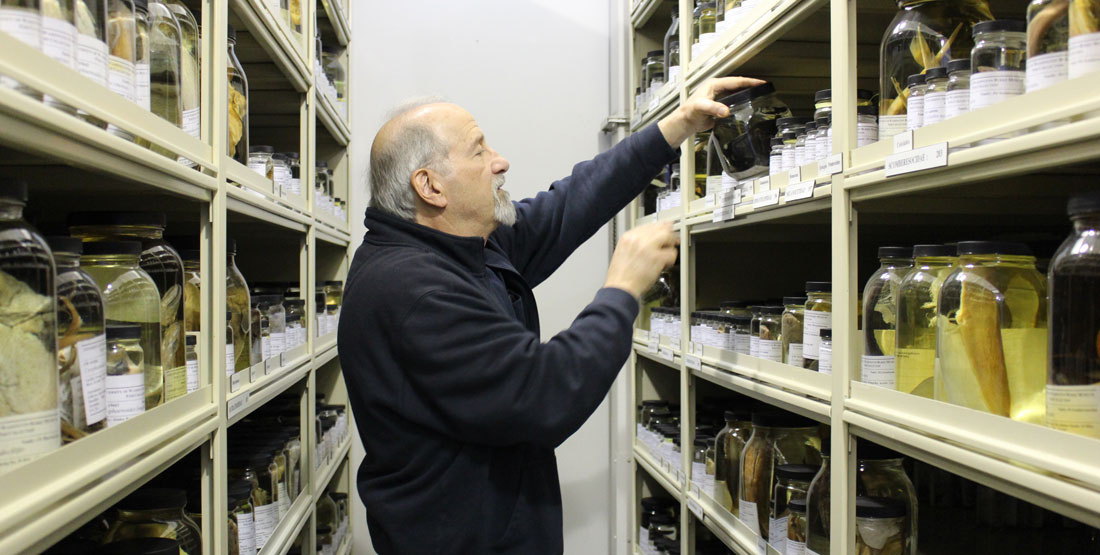 Now, more than 40 years later, Ted retains that same enthusiasm and excitement for these grumpy-looking creatures.

He escorts me into the Burke’s fish collection so that I could see some of the various anglerfish specimens for myself. As the lights of the fish collection slowly flicker on, Ted continues to share his knowledge of anglerfishes, all with a wondrous smile on his face. He begins to move quickly through the dimly lit room, looking through several shelves before finding a female anglerfish specimen in a clear jar and holding it up to eye level to inspect. The specimens are preserved in ethanol and lose their color, so it looks quite strange to me.

Ted reaches into a tank and pulls out a larger specimen, pointing out the most distinguishable feature, its highly tactile, species-specific bioluminescent lure. The female anglerfish has the ability to jut out and wiggle its lure to entice other deep-sea creatures before making them into a tasty meal.

“Can you just imagine what a nice, attractive thing that might be if you’re another little fish?” Ted chuckles.

Dinner isn’t the only thing trying to take a bite of the female anglerfish. Their tiny male counterparts rely on females to survive. “Tiny little dwarf males have a really short life existence. All the evidence that we have indicates that they probably live only a few weeks—maybe a month—and then they die if they don't find a female because they really don't have the apparatus to eat.” Ted said.

Once a male encounters a female, it bites onto her anywhere it can—be it her head, face, fins or lips—and permanently fuses to her in a connection that allows a “hormonal communication between male and female that stimulates the development of gonads,” according to Ted. Over time, the male loses his fins and organs until only testes remain; this is called sexual parasitism. While it may seem like the female is getting a raw deal, the relationship is actually mutually beneficial. She supplies dinner and a bloodstream, and he supplies her with sperm for reproduction whenever she wants. Oh, young deep-sea love!

As Ted prepares for retirement later this summer, he has high hopes for what researchers will learn about anglerfishes in the future. One recent milestone was the first video of anglerfishes swimming in the wild. Scientists at the Monterey Bay Aquarium Research Institute recently found and filmed an anglerfish in motion after 20 years of underwater research using submersibles.

Ted and fellow deep-sea researchers still have many questions about anglerfishes.

“People have hypothesized that perhaps these things are reproducing parthenogenetically—maybe they’re cloning,” he said. “In some cases maybe females don’t need males to reproduce.” He also questions whether the bacteria found in anglerfish lures is species-specific and believes DNA analysis will hold the answer.

“Some think that perhaps each kind of deep-sea anglerfish is associated with a species-specific strain of bacteria,” he explained. “Look at the different strains of bacteria and you could come up with a co-evolutionary scenario that the bacteria evolved along with the fishes… I guess a lot of it is examples of just how amazing natural selection can be.”

Whatever the case, Ted has had a profound impact in the field of ichthyology and on the Burke Museum fish collections. His research and work will continue to inspire future generations of researchers interested in the diversity of deep-sea life—and those of us that are just fascinated by these incredibly odd creatures.