Healing and solidarity with the Marshallese community

March 1 is a national day of mourning for the Marshallese, it is a day when people gather to reflect and remember those whose lives were lost, but also to address the issues that continue to impact the Marshallese today.

Before I became the Curator for Oceanic and Asian Culture at the Burke Museum and a lecturer in the University of Washington (UW) Anthropology Department, I worked for the Marshall Islands Government for 17 years. After living on an outer island of the Marshall Islands as a Peace Corps Volunteer, I worked for the Marshall Islands’ Embassy in Washington, D.C. My main responsibility was to research the impacts of U.S. nuclear weapons testing, and to support Marshallese leaders with their requests to the U.S. Government for healthcare and environmental restoration resulting from U.S. activities. The two large chunks of my profession—advocacy work for the Marshallese, and teaching/curating at UW—came together on March 1.

Last year, Assistant Pastor Lucky Juda, a Bikinian elder living in Washington state, told me that he didn’t want to feel invisible or alone on such an important day of grieving and remembering. He was in Washington state to access healthcare services he could not find in the Marshall Islands, but learned that citizens of the Freely Associated States (COFA) are not eligible for Medicaid even after entering the country legally. 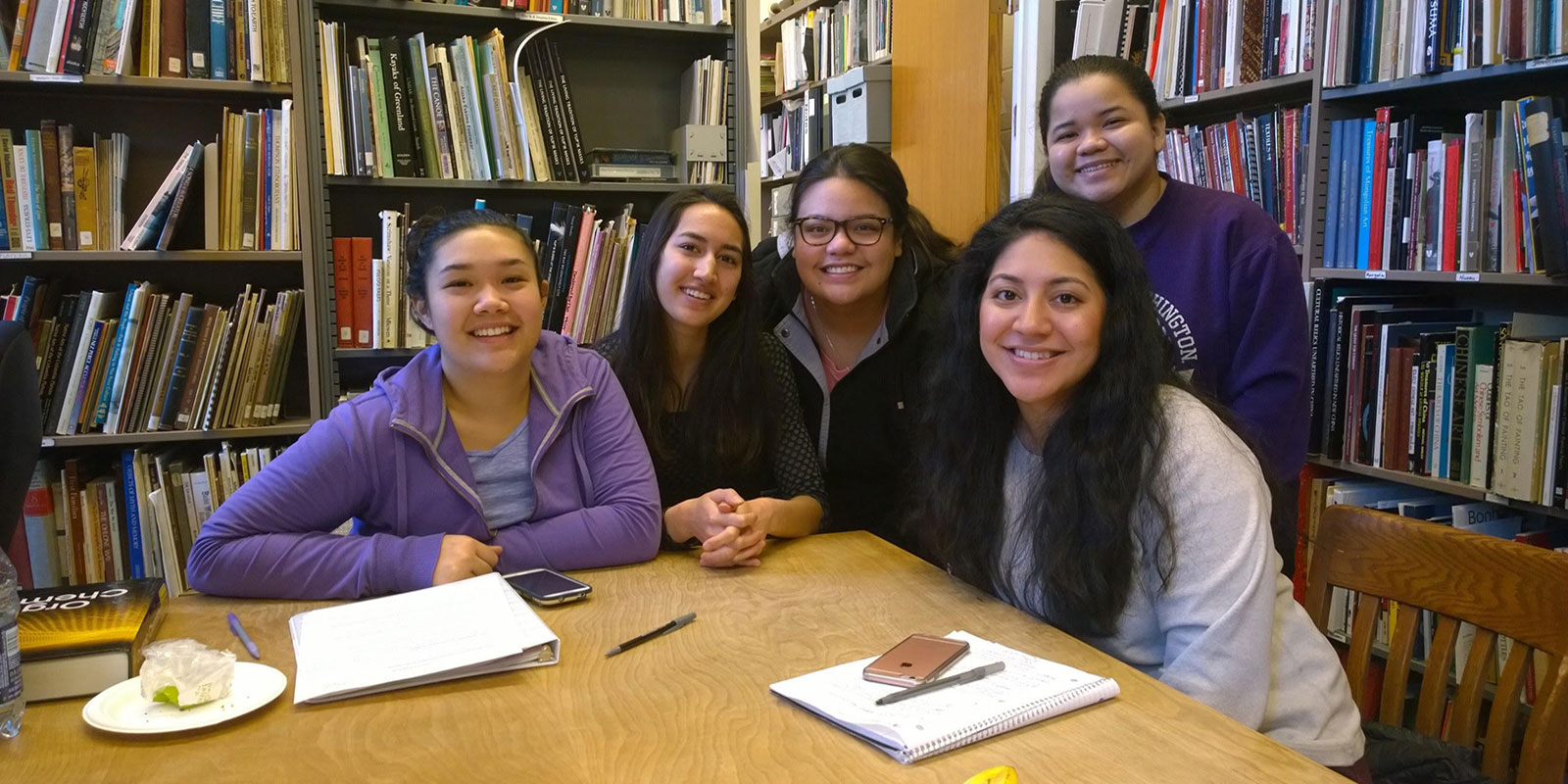 Members of the Research Sisters—a group of undergraduate Pacific Islander students at the University of Washington who created the remembrance event on March 1.

A group of six women, all undergraduate Pacific Islander students at the University of Washington (UW), who have been researching and learning at the Burke Museum for several years, wanted to create a remembrance event on March 1 of this year. The group, who refer to themselves as the “Research Sisters,” wanted to share this little-known history of the suffering that took place, but more importantly, to create a day where the Marshallese community in Washington state would feel supported.

The group of students planned a solidarity ceremony at the Burke Museum to “come together to hear stories, to witness, to connect to the strength of ancestors residing in the collection of Marshallese heritage objects at the Burke, and to join the Marshallese in efforts to address healthcare needs and the impacts of displacement.“ The Burke is the Washington State Museum of Natural History and Culture and a place for everyone in the Northwest, and it was the perfect place to host such an event.

On March 1, 2016, Lucky Juda attended the solidarity ceremony and gave the keynote address where he shared just how much the testing program devastated him personally. “I’ve lost my aunties, my uncles, my brother, my sister, my papa, and my mama… my mama!” Lucky also expressed that while many focus on the Bravo event, there were 67 total weapons tests along with other types of hardships related to the detonations, including the starvation people experienced during displacement and the crippling injuries suffered by people as a result of their relocation.

Julie Stein, Executive Director of the Burke Museum, delivered a heart-wrenching letter from Her Excellency Dr. Hilda Heine, President of the Marshall Islands, detailing how the Marshall Islands experienced the equivalent of 1.6 Hiroshima bombs every single day for a period of 12 years.

Dr. Chadwick Allen, Vice Provost for Faculty Advancement at the University of Washington, also reminded the audience of the severe abuses endured by indigenous communities during the Cold War and the role of our institutions to acknowledge these events in an effort to address the resulting hardships.

Following the speeches, the student hosts of the event invited participants to stand in a circle and to create community through gifts of songs—something that transcends language barriers and is important to the Marshallese people. The Marshallese community led with “Ij Yokwe Lok,” a song about the central importance of land to the Marshallese people, followed by “Bikini Anthem,” that communicates the devastation and sorrow of the people when they no longer can live on their land because of radiological contamination. Many audience members offered songs of support in response: Malaelupe Samifua, a former UW student who taught in the Marshall Islands for three years, sang the RMI national anthem, and the Micronesian Islands Club at the UW shared a chant in the Chamorro language.

The final portion of the ceremony was dedicated to building support from the Marshallese community. Attendees made pledges that ranged from joining in efforts to reform access to healthcare in our state to continuing to learn and teach others about this history. As one Marshallese woman commented, “the Marshallese were in tears today, definitely for the loss of loved ones and the suffering we endure, but also tears of appreciation because so many people finally want to listen to our story and help us. 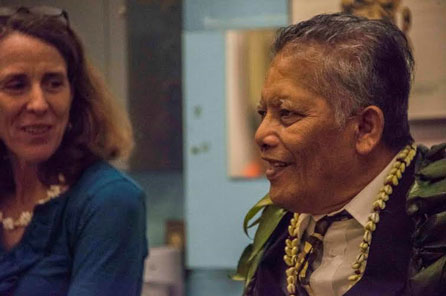 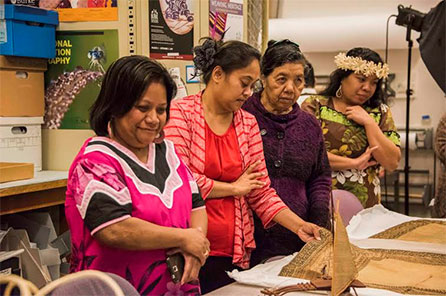 Marshallese community members visit jaki-ed—woven clothes worn by the Marshallese prior to the arrival of missionaries—in the Burke Museum collection.

The day concluded with a showing of Adam Harowitz’s film, Nuclear Savage. The film created a visual understanding of the impacts of the testing program discussed throughout the day. Many Marshallese viewers commented about the number of people in the film who have died since the last time they saw the movie, a reminder of the shorter lifespan for the Marshallese people compared to American citizens.

An emotional and meaningful day

The March 1 ceremony was incredibly emotional, both for the Marshallese community, but also for many of the people who joined the Marshallese in solidarity. In addition to community members, students, Burke and UW staff in attendance, staff from the Washington State Commission on Asian Pacific American Affairs attended the event along with a representative from Congressman Jim McDermott’s office.

As the day came to an end, the office of Washington State Representative Sharon Tomiko Santos sent a message to the gathering:

Congress eliminated access to federal health programs, like Medicaid, for Marshallese across our nation and here in Washington. This callous decision compounded the immediate and long-term health effects suffered by victims of nuclear weapons testing and the generations who followed. I commend the Micronesian Islands Club, the Burke Museum, and members of the Marshallese community for your collective efforts tell the stories of the Pacific peoples and to educate the public about how our actions as a nation affect past and current inhabitants of the Islands. I share your commitment to remember the past with the belief that injustices by the United States government must not be forgotten. I join with you in the fight to improve health equity for Marshallese and other Pacific Islanders. I look forward to working with all of you in this important endeavor.

I’ll leave you with the words of two of the Micronesian students:

I am at a loss of words to accurately describe how much honoring March 1, Day of Remembrance, with the Marshallese community means to me. As a Micronesian student, it was a privilege and honor to stand with the Marshallese as they visit with their ancestors (jaki-ed and kili bags), shared their stories, and graced everyone with their presence at the Burke Museum. On this day, many made pledges: to never remain silent or allow others to silence, to educate and change, to learn, listen, and love. It was definitely a heavy day for sharing, grieving, learning, relationship building, action making and I hope some healing. I'll never forget it.

Seeing Assistant Pastor Juda list the names of his family members that he lost to heart disease and cancer is an image I will never forget. The amount of grieving and tears that resulted from that heartfelt moment made me think about my own family… March 1, a day of remembrance and solidarity, reminds us that the Marshallese are representations of our own families. As a Micronesian student I am truly blessed to have been together with the Marshallese community on this day of unity, tears, grief, awareness and connection.

Gonzalez is the 14th curator at the Burke, and joins Dr. Peter Lape as the second curator of archaeology at the museum.

Learn about the unique quality of Huckleberries gathered near Mount St. Helens and how to make them into delicious muffins with Burke Museum Tribal Liaison Polly Olsen (Yakama).

Gonzalez is the 14th curator at the Burke, and joins Dr. Peter Lape as the second curator of archaeology at the museum.