A wide variety of animals have tusks, from elephants and walruses to five-pound, guinea pig-looking critters called hyraxes. But one thing tusked animals have in common is that they’re all mammals—there are no known fish, reptiles, or birds with tusks. In a new study in Proceedings of the Royal Society B, paleontologists traced the first tusks back to ancient mammal relatives that lived before the dinosaurs, and to do so, they had to define what makes a tusk a tusk in the first place. 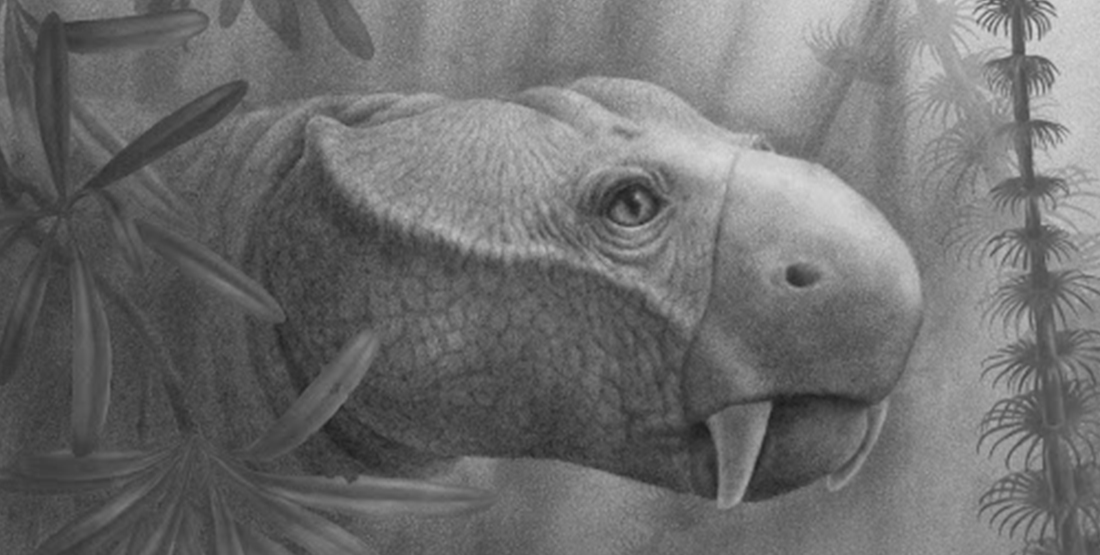 Illustration of a dicynodont.

“Tusks are this very famous anatomy, but until I started working on this study, I never really thought about how tusks are restricted to mammals,” says Dr. Megan Whitney, former Burke Museum and University of Washington graduate student who is now a researcher at Harvard University and the lead author of the study.

“We were able to show that the first tusks belonged to animals that came before modern mammals, called dicynodonts,” says Dr. Ken Angielczyk, a curator at Chicago’s Field Museum and an author of the paper. “They’re very weird animals.”

The dicynodonts mostly lived before the time of the dinosaurs, from about 270 to 201 million years ago, and they ranged from rat-sized to elephant-sized. Modern mammals are their closest living relatives, but they looked more reptilian, with turtle-like beaks. And since their discovery 176 years ago, one of their defining features has been the pair of protruding tusks in their upper jaws. The name dicynodont even means “two canine teeth.”

The researchers got the idea to study the origin of tusks while taking a lunch break on a paleontological dig. “We were sitting in the field in Zambia, and there were dicynodont teeth everywhere,” recalls Whitney. “I remember Ken picking them up and asking how come they were called tusks, because they had features that tusks don’t have.” 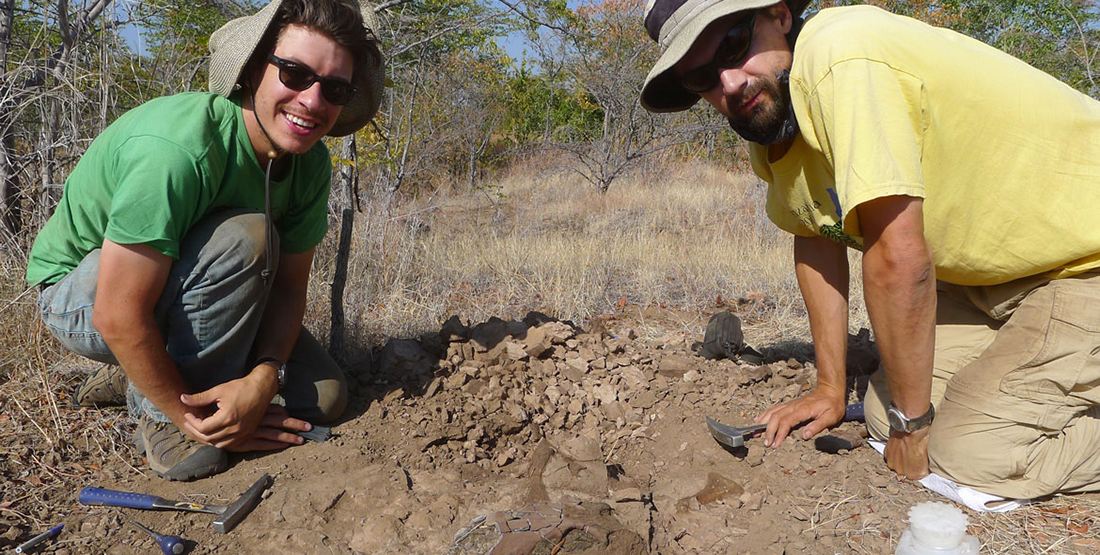 Co-authors Christian Sidor (right) and Brandon Peecook uncover a fossil in Zambia in 2014.

Angielczyk had hit upon a crucial distinction: not all protruding teeth are technically tusks, and the teeth’s makeup and growth patterns tell us whether they count. “For this paper, we had to define a tusk, because it’s a surprisingly ambiguous term,” says Whitney. The researchers decided that for a tooth to be a tusk, it has to extend out past the mouth, it has to keep growing throughout the animal’s life, and unlike most mammals’ teeth (including ours), tusks’ surfaces are made of dentine rather than hard enamel.

Under these parameters, elephants, walruses, warthogs, and hyraxes all have tusks. Other big teeth in the animal kingdom don’t make the cut, though. For instance, rodent teeth, even though they sometimes stick out and are ever-growing, have an enamel band on the front of the tooth, so they don’t count.

Some of the dicynodont tusks that the team observed in Zambia didn’t seem to fit the definition of a tusk either—they were coated in enamel instead of dentine.

The different makeup of teeth versus tusks also gives scientists insights into an animal’s life. “Enamel-coated teeth are a different evolutionary strategy than dentine-coated tusks, it’s a trade-off,” says Whitney. Enamel teeth are tougher than dentine, but because of the geometry of how teeth grow in the jaw, if you want teeth that keep growing throughout your life, you can’t have a complete enamel covering.

Animals like humans made an evolutionary investment in durable but hard-to-fix teeth—once our adult teeth grow in, we’re out of luck if they get broken. Tusks are less durable than our enamel-coated teeth, but they grow continuously, even if they get damaged. It’s like the compromise of getting a car that’s very reliable but very difficult to get repaired when it does have trouble, versus driving a beater that needs frequent repairs but is a model that’s cheap and easy for any mechanic to fix.

The different kinds of teeth animals have evolved can tell scientists about the pressures those animals faced that could have produced those teeth. Animals with tusks might use them for fighting or for rooting in the ground, exposing them to little injuries that would be risky for enamel teeth that don’t grow continuously.

To study whether dicynodonts tusks really were tusks, the researchers cut paper-thin slices out of the fossilized teeth of 19 dicynodont specimens, representing ten different species, and examined their structure with a microscope. They also used micro-CT scans to examine how the teeth were attached to the skull, and whether their roots showed evidence of continuous growth. The scientists found that some dicynodont teeth are indeed tusks, while others, particularly those of some of the earlier species, were just large teeth. It wasn’t a strict progression from non-tusks to tusks, though—different members of the dicynodont family evolved tusks independently. 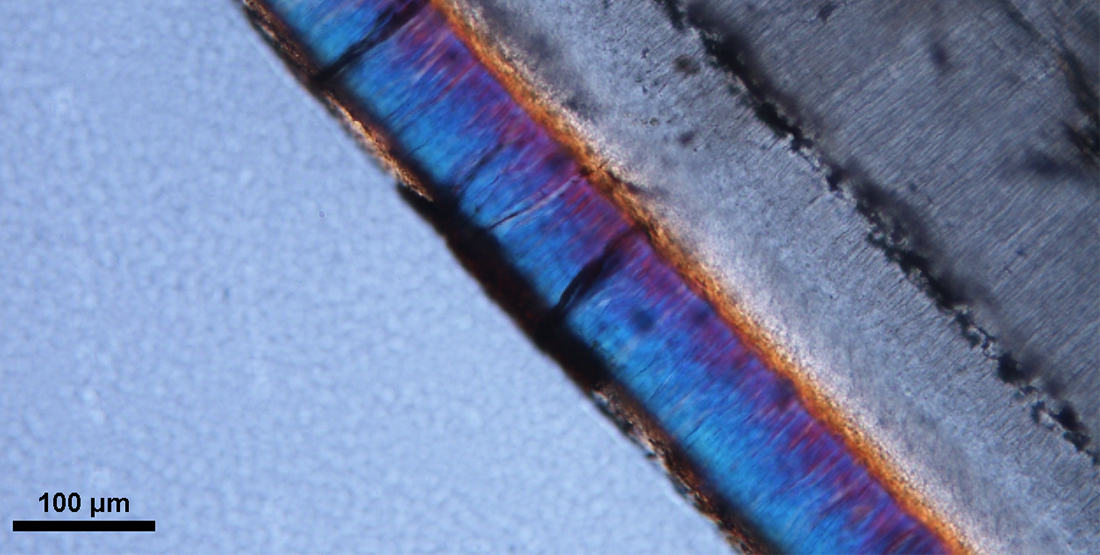 Cross-section through a dicynodont canine under cross-polarized light. The dentine core of the tooth is in grey and the capping enamel is shown in blue/purple. This enamel covering suggests that this caniniform tooth is more like a regular tooth than a true ever-growing tusk. 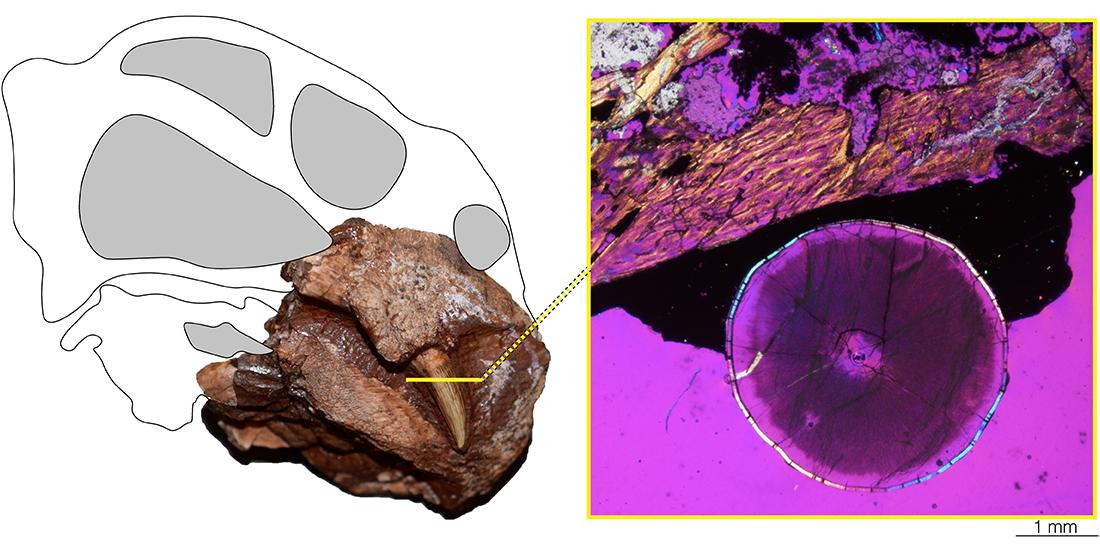 The enlarged caniniforms of Diictodon have enamel making them more like teeth than tusks. The cross section reveals a ring of enamel around the outside of the tusk that is illuminated under polarized light.

Whitney says she was surprised by the finding. “I kind of expected there to be one point in the family tree where all the dicynodonts started having tusks, so I thought it was pretty shocking that we actually see tusks evolve convergently,” she says.

“Dicynodont tusks can tell us a lot about mammalian tusk evolution in general,” says Angielczyk. “For instance, this study shows that reduced rates of tooth replacement and a flexible ligament attaching the tooth to the jaw are needed for true tusks to evolve. It all ladders up to giving us a better understanding of the tusks we see in mammals today.”

“Dicynodonts were the most abundant and diverse vertebrates on land just before dinosaur times, and they’re famous for their ‘tusks.’ The fact that in reality only a few have true tusks, and the rest have big teeth, is a beautiful example of evolution we can document. We can see how to build a tusk!” says Dr. Brandon Peecook, who is also a former Burke Museum/UW graduate student and is now a curator at the Idaho Museum of Natural History and one of the paper’s authors.

The researchers say that the study, which shows the earliest known instance of true tusks, could help scientists better understand how evolution works.

“Tusks have evolved a number of times, which makes you wonder how—and why? We now have good data on the anatomical changes that needed to happen for dicynodonts to evolve tusks.  For other groups, like warthogs or walruses, the jury is still out,” says Dr. Christian Sidor, a curator at the University of Washington Burke Museum and one of the paper’s authors.

Most of the dicynodont fossils analyzed in the study were collected during fieldwork in Tanzania and Zambia. These specimens, which are currently stored at the Burke Museum and other U.S. museums, will be repatriated at the end of the project and become part of the permanent collections at the National Museum of Tanzania in Dar es Salaam, Tanzania, and the Livingstone Museum in Livingstone, Zambia. This partnership allows for researchers across the globe to study the fossils, and ultimately bring the specimens back to their home nations for further research.

Dicynodonts were a very diverse group, and future studies could examine other dicynodont species and how their tusks (or non-tusks) developed. Sidor’s lab at UW is one of a handful across the country where the fossilized bones and teeth are routinely analyzed at the microscopic scale.

“Fossil bones, by themselves, don’t tell you very much.” says Sidor. “Maybe you can say something about its size or where the animal died, but the external surface of a bone doesn’t give you many clues about how the animal lived or its physiology. Thin-sectioning can also provide a lot of useful information because bones and teeth can  capture a record of an animal’s life in their tissues. On a tusk that’s ever-growing, the dentine records a daily measure of how fast the animal was growing. Did it grow faster or slower over certain seasons? Stop growing for a certain period of time? Creating thin sections of bones and teeth opens up a lot of other interesting things about the animal almost like analyzing tree rings. These are the types of questions we can continue to research.”

“Despite being extremely weird animals, there are some things about dicynodonts, like the evolution of tusks, that inform us about the mammals around us today,” says Angielczyk. “Plus, anytime you can say mammals aren’t that special, dicynodonts did it first, that’s a good day.”