“Behind the Glass” takes you into the collections to hear about the latest Burke research straight from the source. This month Development Coordinator Haines Whitacre sat down with Collections Manager for Malacology, Dr. Melissa Frey, to learn how community science is reshaping what we know about Pacific Northwest land snails and slugs.

Haines Whitacre: Thank you for sitting down with me Melissa. Tell me about one of the projects you’re currently working on.

Melissa Frey: One major project is SLIME Pacific Northwest. SLIME (Snails and slugs Living In Metropolitan Environments) is a community science project that aims to chronicle the presence and distribution of land snails and slugs in the Pacific Northwest region. This is an exciting opportunity to better develop the land snail and slug collection at the Burke and raise awareness of the rich biodiversity that often goes overlooked and under-appreciated in the PNW.

Haines: So what exactly is SLIME Pacific Northwest, and how does someone participate?

Anybody who makes an iNaturalist observation using their phone or camera can upload it and suggest an identification (or use the artificial intelligence feature within iNaturalist to suggest an ID). My project collaborators and I — along with a dedicated group of community scientists — check records and either confirm or improve the identifications.

Once we agree on the species ID, that observation becomes “Research Grade,” meaning it is shared with other data aggregators and can be downloaded for research use. You can see all of the red dots on the map where iNaturalist users have reported their observations. Because there’s so much to learn, we've extended the project to any location in the Pacific Northwest, not just metropolitan centers.

Haines: How did SLIME come about?

Melissa: SLIME began with Dr. Jann Vendetti, Associate Curator of Malacology at the Natural History Museum of LA County. Dr. Vendetti has had phenomenal success using iNaturalist to engage with community scientists whose observations helped her better understand land snails and slugs in Southern California. In 2018, she and her colleagues published a paper based on iNaturalist data that revealed five species of introduced land snails and slugs previously unrecorded in Southern California.

Around the same time, the Burke was looking for community science projects that might interest museum visitors. So, I contacted Jann to ask her if she'd be interested in extending SLIME to the PNW, and she graciously agreed!

We also reached out to Dr. Casey Richart at Oregon State University, a researcher who has worked extensively on terrestrial snails and slugs from Washington to California. Jann, Casey, and I are starting to comb through the iNaturalist data, with an overall goal to answer various questions ranging from the distribution of introduced species to patterns of species richness to the effectiveness of community science.

A lot of this project centers around building awareness of the biodiversity that we have in our own backyards. But it's also about engaging with other people who share these interests . . . It's fun and rewarding to make those community connections. I might even say (or warn) that iNaturalist is addictive. It is a form of social media, but used in a totally different and positive way.

Haines: What’s the experience like for people who join the SLIME Pacific Northwest project?

Melissa: A lot of this project centers around building awareness of the biodiversity that we have in our own backyards. But it's also about engaging with other people who share these interests. I have made a lot of contacts through iNaturalist. It is not unusual for observers to reach out to one another and ask about identifications or locality information — there's even been a few invitations to go slugging! It's fun and rewarding to make those community connections. I might even say (or warn) that iNaturalist is addictive. It is a form of social media, but used in a totally different and positive way.

Haines: When you engage the public in this way, as community scientists, what differences do you see in your research?

Melissa: Crowdsourcing data moves us away from the traditional approach of gathering data and then sharing it with the public. Here, we flip the approach: community scientists are the ones going out into nature and collecting data through their own observations. Their reports can show us, in broad terms, patterns of species presence and distributions across regions.

A single researcher, or even a small team, would find it very difficult to capture this much data on their own. Now, community scientists on iNaturalist make it possible for researchers to access an enormous collection of geographical, temporal, and taxonomic data. We can answer questions on a scale that wouldn’t be possible otherwise. This changes things quite a bit.

Haines: What kinds of connections do you make with community scientists on iNaturalist?

Melissa: One community scientist reached out to me because he wanted to know how to differentiate between two species of slug that are particularly challenging to identify. I sent him a bunch of materials: keys on how to identify slugs and which anatomical traits to examine in detail. Up until then, we didn't know each other, but we kind of know each other now. That's what can be really neat about this app — you get to connect with people who just really want to learn about the natural world. That feels good.

Haines: So iNaturalist becomes a forum where you can share your professional knowledge?

Melissa: That's right. And I respond to every single person who contacts me. All they have to do is type @molissca (my handle) into a comment field, and I’ll reply. I check my feed several times a week and follow up on any comments or messages in my inbox. Sometimes, I will message someone and suggest we use email, especially if I need to share large files.

Haines: In a way, you get to work with community scientists everywhere who are learning how to make informed observations.

Melissa: Exactly! People are learning and getting excited about what's in their backyards or in the natural areas around them. By making those associations, I think they feel more connected to the environment and the animals and plants that live there. There are a lot of fascinating animals living in the Pacific Northwest that I think people would care about if they just knew more about them. Most of the time when I point these out, people are like, “Oh, I had no idea!” They may have known about the iconic Pacific banana slug, but not many people know that we also have amazing — and aptly named — species like taildroppers and jumping slugs. People want to protect native species and the natural ecosystems around them. The SLIME project gives them a tool to participate in studying and protecting local biodiversity. 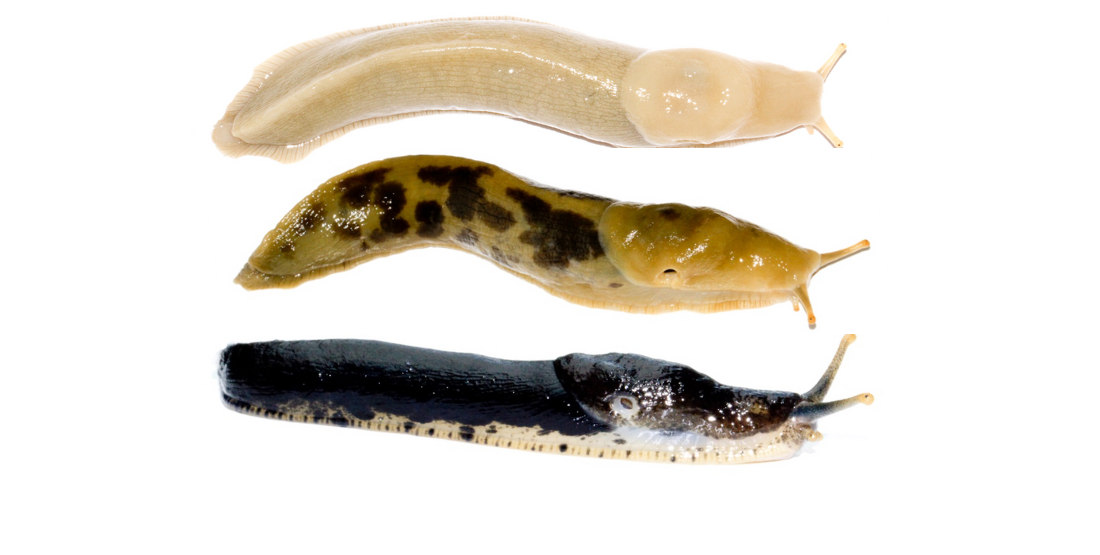 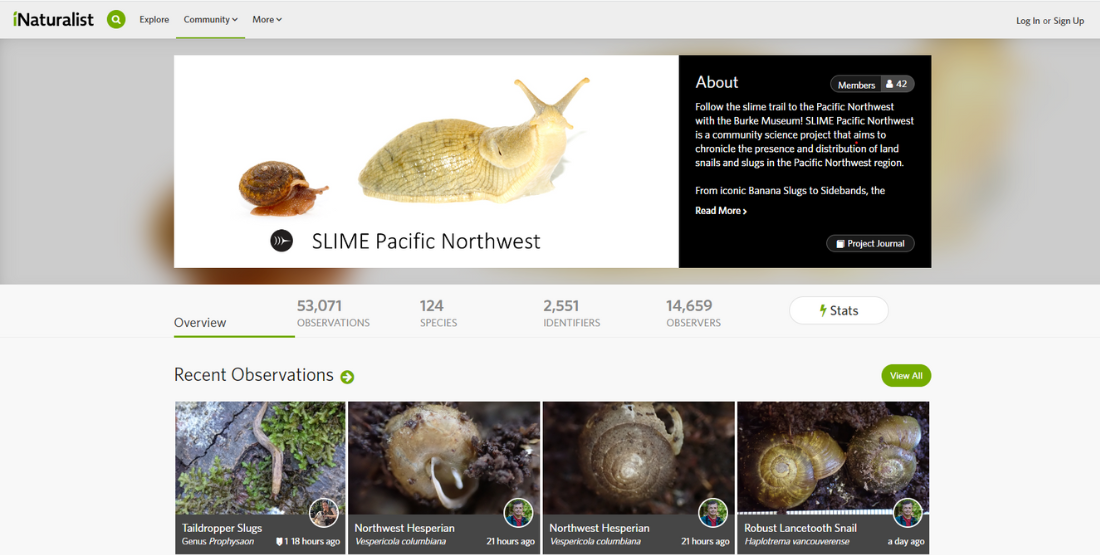 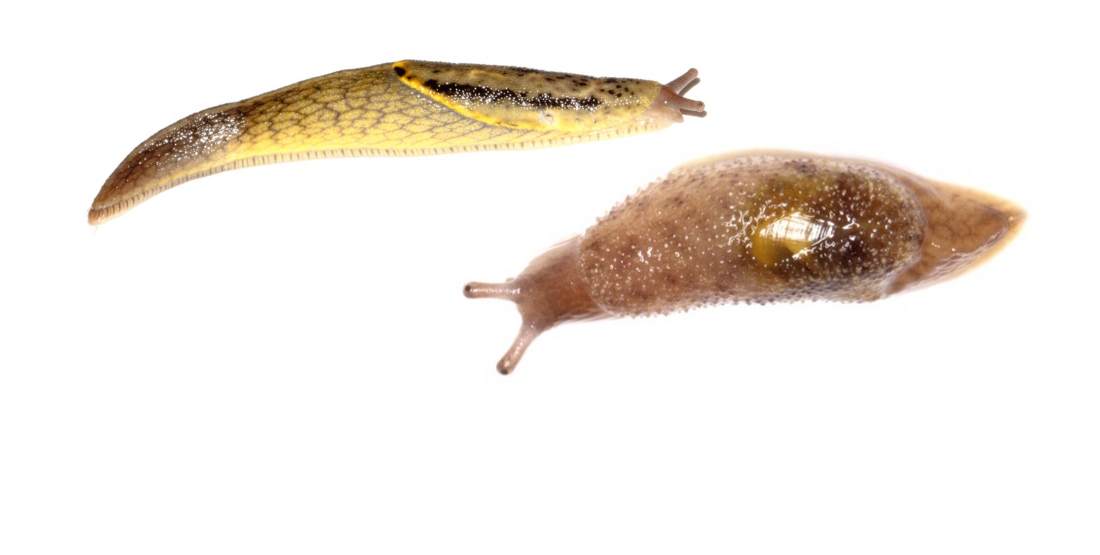 The Yellow-bordered Taildropper (Prophysaon foliolatum, above) can amputate its own tail if it feels threatened. The Warty Jumping-slug (Hemphillia glandulosa, below) throws its body into the air to avoid predators.

Melissa Frey has worked at the Burke Museum for more than seven years. She joined the Burke after working as the Curator of Invertebrates at the Royal BC Museum in Victoria, British Columbia. Although her Ph.D. studies focused on marine snails, she became fascinated with land snails and slugs after moving to the Pacific Northwest.

When asked about her favorite mollusc, Melissa said she can’t pick just one, but she finds land snails and slugs to be the most charming.

Collections Manager of Malacology at the Burke Museum