“Behind the Glass” takes you into the collections with a professional from one of our featured departments to talk about the projects currently on their minds. This month, Burke Development Coordinator, Haines Whitacre, sat down with the Burke’s Collections Manager for Ornithology, Kevin Epperly, to learn about photogrammetry and the hummingbird with its own paparazzi.

Haines Whitacre: Thank you for sitting down with me today, Kevin. I have to ask, what’s aflutter in ornithology these days?

Kevin Epperly: We’re starting to use citizen science—apps like eBird and other repositories where citizens are generating data—to figure out patterns in bird behavior and migration and population size. Also, in the museum in particular, there’s a lot of digitization happening, digitizing specimens and records, as well as songs. Overall, we're trying to use new technologies to study birds better.

KE: In the broadest terms it’s measuring things using photographs. For example, if you take aerial photographs to make a map, that could fall under photogrammetry. We are using it to build 3D models of specimens. That’s done by software that measures differences between photos of a single object in order to build a 3D model of the object.

At the moment we are specifically working on macro-photogrammetry—photogrammetry of small objects—to make models of hummingbird bills. Our curator, Dr. Alejandro Rico-Guevara, studies hummingbirds and their feeding adaptations and behaviors. We’re interested in how hummingbirds interact with flowers and each other while feeding, how the pollinator-plant interaction works, and how certain physical and behavioral traits, such as bill shape and use, have evolved as part of these interactions. Without having to CT scan all of these specimens–which would be expensive and take a lot of time—we can make 3D models of all the bills in the collection. But we also have the goal to do this with live specimens in the field. It would be really hard to CT scan hummingbirds in the field since it’s very difficult to bring a CT scanner to the field and I don’t think the hummingbirds would be able to sit still long enough.

KE: No, not at all. So this will increase our sample size without having to rely just on collections. This technology is more flexible since it lets us scan live birds, really old skins, or more recent things which will let us see bill shape, structure, adaptations, differences between males and females, or sister species, or specialists versus generalists. It’s easier to measure tradeoffs in adaptations in fine detail with models from the photogrammetry scans.

HW: How long does it take to image a usable model?

KE: There are a few factors. The more cameras you have, the faster you can do it since you can get more photos at one time. We're still trying to find where the threshold is for how many you need to get a good model, especially with all of the unknown factors that go into modeling a live specimen in the field. Are a third of the photos going to end up being no good because it was moving? Whereas right here in the lab, that bird never moves. So it's easy to get as many photos as we need. We're trying to find that cut off. Right now we're trying to figure out how we get the best model possible and is it possible to get a model that will work for us. Once we figure that out we’ll see how we can streamline the process to make it as fast and easy as possible.

For some of these we're doing 480 photos all together—which is a lot and that's with a still specimen—but we can get that many photos in eight minutes or so. It's pretty fast, it's under 10 minutes. We cut it in half when we were doing a test here holding it in our hands. We did 240 photos, which should be okay. That took about four minutes. In the field we’d probably aim for that and if we want to increase the amount of photos we’ll just add more time or cameras, but our goal is to have the bird there for only five minutes or so.

KE: Yes, exactly. That bird there has had thousands of photos taken as we were figuring it out. But that’s set up for a very specific purpose, which is to image hummingbird bills. We can use the same cameras and almost the same setup to image full specimens that we could then hopefully make available to researchers and the public. We would make a 3D model of the specimen with a color map from all of the photos that we then put on a 3D interactive object of that specimen. This way people who can’t come and access the specimen can see it. Or, for example, with an ivory-billed woodpecker from the 1800s that we don’t want every person to come handle, someone could access the model and move it around as much as they want in a virtual space. From those models you could also print different bill shapes or feet to teach people about bird anatomy and adaptations with an actual object they can hold but without having to have the actual specimen. 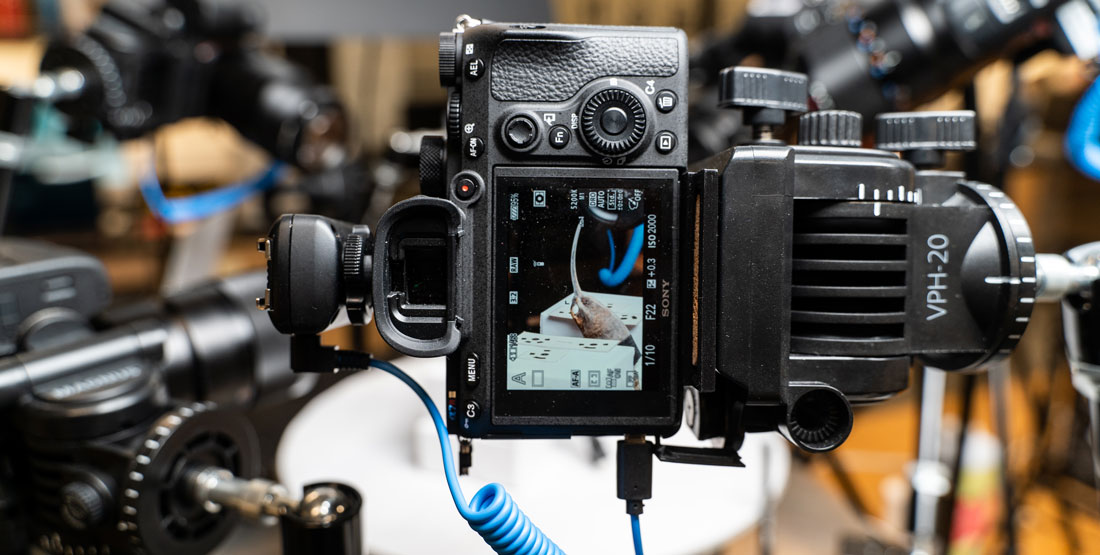 A camera used in the photogrammetry process shows an image of the head and bill of a Long-billed Hermit specimen. 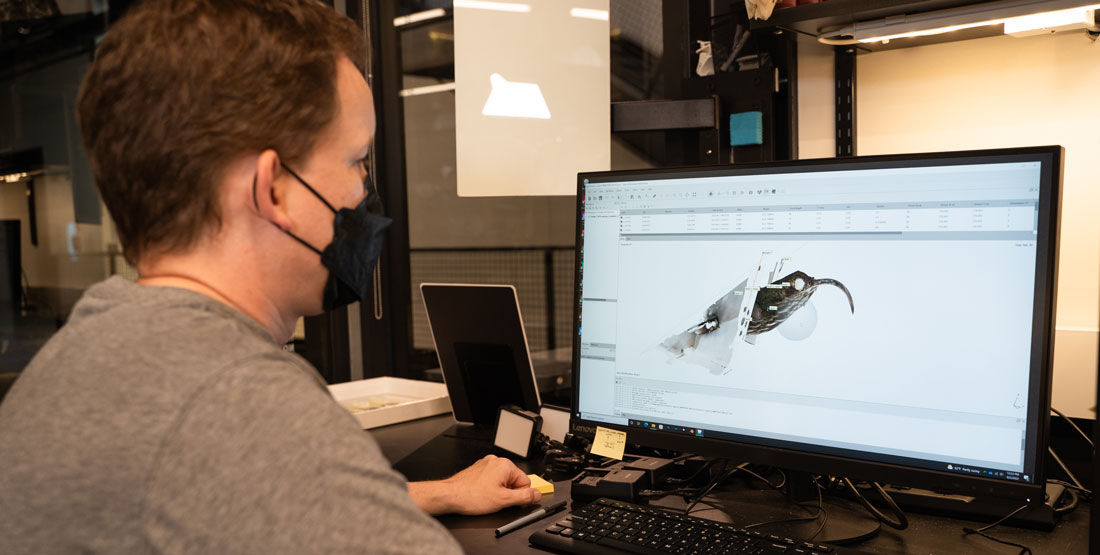 A 3D model of a White-tipped Sicklebill (Eutoxeres aquila), another species of hummingbird, with a color map, or texture, built from all the photos taken of the specimen place onto the model.

HW: What are some ways community members can support this work and the Burke Ornithology division as a whole?

KE: They can always bring birds in. If you have a specimen you want to bring to us, you’d just have to put it in a ziplock bag, get all the air out, put it in a freezer, and bring it to the business entrance with a card that says the address where the bird was found and date it was found. Those are really important data points for knowing about the bird. There’s a lot of other data we get from examining the bird but knowing the date that it died and where it was when it died is super helpful.

People can always reach out to ask what volunteer opportunities there are. There’s always ongoing curatorial work: tagging birds, organizing them, washing skeletons that have gone through the beetle colony, entering data. There are always little projects within the pipeline between the bird coming through the door frozen and it ending up in the collection.

And of course we can also always use funds to support our field research and ongoing projects. If we want to go image hummingbird bills in Colombia, we need funds to help get down there and pay for people’s food and accommodations. There are always ways to support what’s happening in our department!

Funding for this project is made possible by a University of Washington STF Grant.

Kevin Epperly has worked at the Burke for over 16 years. He began working with the Burke as an undergraduate studying bio-anthropology and has since worked in numerous capacities throughout the museum. As a curatorial assistant in the Ornithology Department, he worked on various tasks such as cataloging specimens, entering data, preparing specimens for the research collections and exhibit, conducting field work, helping run the curator’s molecular lab. Kevin is now the Burke Ornithology Collections Manager.

He has always been a natural history buff and loved animals, but was not always a specialist in ornithology, a passion he developed early when first starting at the Burke and which has only grown since.

Though a tough choice, his favorite bird is the Flammulated Owl.