Humans may be forgiven for overlooking bats. After all, many bat species are out and about when we're turning in. And generations of Dracula lore may have made us a little wary.

But bats are a diverse bunch. They make up one of the largest groups of mammals, with more than 1,300 species worldwide. Up close, bat species look quite different from one another. Some have large ears. Others sport elaborate noses or long jaws. With so much morphological variety, bats represent an opportunity to learn what types of evolutionary forces shape the shapes of animals. 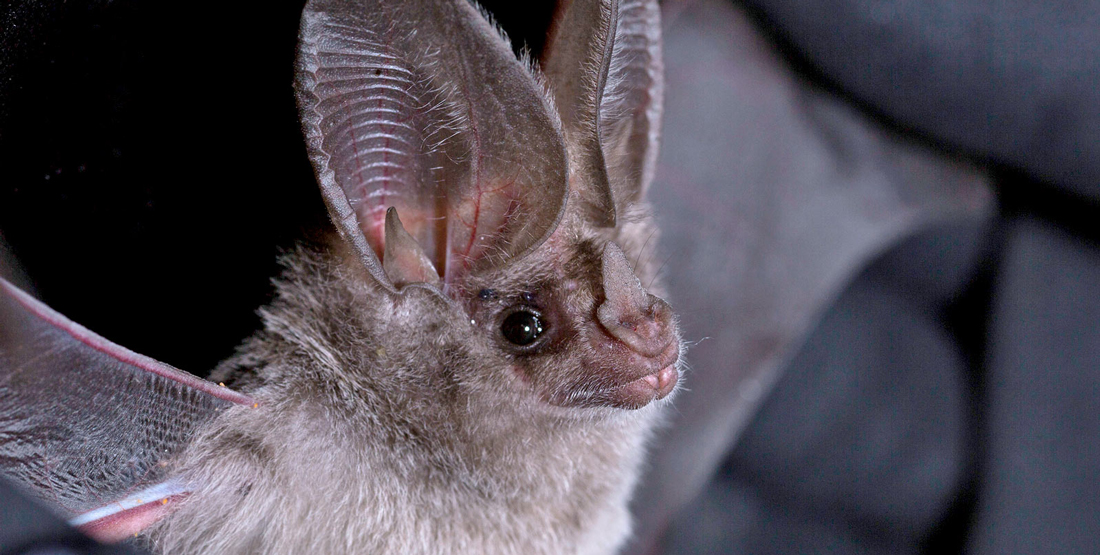 A team of biologists at the University of Washington has been using bats to do just that. Postdoctoral researchers Jessica Arbour and Abigail Curtis, and Sharlene Santana, UW associate professor of biology and curator of mammals at the UW's Burke Museum of Natural History & Culture, focused on the diversity among bat skulls.

The researchers performed high-resolution microCT scans of the skulls of more than 200 bat species. They used the scans, as well as information on the evolutionary relationships among bat species, to analyze the types of physical changes that evolved in bat skulls over tens of millions of years and correlate them with specific events in bat evolution, such as when a lineage switched diets or adapted to a new ecological niche. In a paper published May 2 in Nature Communications, they report that two major forces have shaped bat skulls over their evolutionary history: echolocation and diet. They were even able to determine when in bat history these forces were dominant.

"Our study sought to address a major question about the evolution of diversity in the bat skull: What explains the large number of differences that we see in skull shape?" said Santana. "We found that echolocation is a major — and ancient — contributor to skull shape. Diet is also important, but generally more recent." 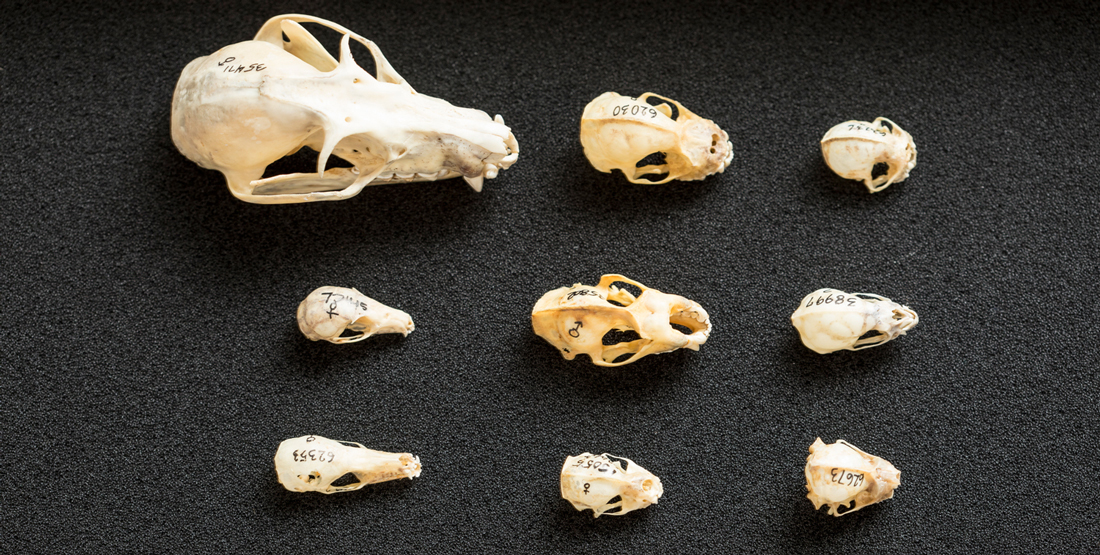 Skulls from multiple bat families, showing a variety of shapes. 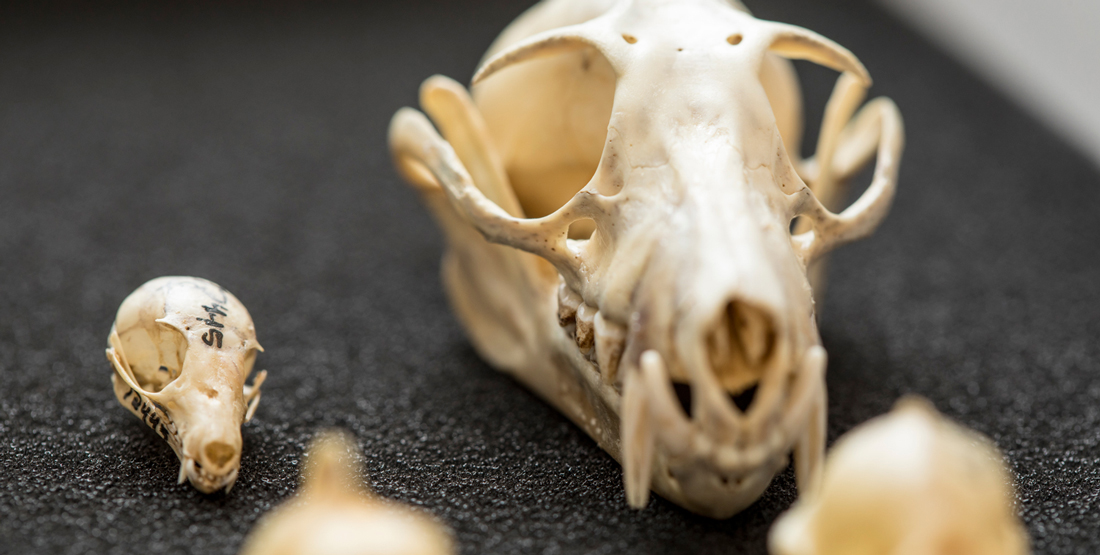 Santana previously used microCT to study the evolution and mechanics of bite force in leaf-nosed bats, a large and diverse taxonomic family of bats from the Americas. In the current study, her group investigated a wider swathe of bat diversity. They performed microCT scans of skulls from 203 species across all 20 taxonomic families of bats. The skulls came from collections at the Burke Museum, the American Museum of Natural History, the Field Museum, the Smithsonian Institution and the Natural History Museum of Los Angeles County.

"Museum collections of bat specimens played a critical role in allowing us to sample so broadly across bats families and really dig into the evolution of such a diverse group," said Arbour.

The scans gathered detailed data on the 3D shape of the lower jaw for 191 species, and the cranium — the upper portion of the skull that includes the upper jaw and braincase — for 202 species. The researchers then used computational modeling to combine the microCT scan data on the skulls with data on the evolutionary relationships among the bat species, as well as ecological characteristics such as diet. Their analysis allowed them not just to compare skull differences among and within bat lineages, but also to focus on specific parts of the skull, like the lower jaw.

"It's important to independently analyze different parts of the skull because some parts of the skull have many different jobs, which may constrain the changes they can undergo," said Santana. "For example, the cranium has many functions, such as feeding, respiration and protecting the brain. The lower jaw is largely just involved in feeding, which could give it more freedom to evolve in response to dietary changes."

The team's analyses indicated that early in bat evolution — from about 58 million to 34 million years ago — echolocation was a primary driver of skull shape across bat families. Most bats use echolocation to hunt, forage and navigate in light-poor settings. Bats echolocate by emitting specific types of high-pitched sounds with the larynx and then hearing the echoes as those sound waves bounce off of objects in their path. The fossil record indicates that echolocation evolved in bats early, at least 52 million years ago. Since then, different bat families have evolved unique mechanisms for echolocation — such as projecting sounds through the nostrils instead of the mouth. One group, the megabats, even lost the ability to echolocate laryngeally.

"Our study sought to address a major question about the evolution of diversity in the bat skull: What explains the large number of differences that we see in skull shape?"

The team found that starting about 26 million years ago, diet became the more dominant driving force behind skull shape evolution, but not in all bats. While some bat families are fairly uniform in diet, with all species eating insects, for example, the leaf-nosed bats include species that eat vastly different types of food, ranging from insects to fruit to small vertebrates — even blood. The team found that the evolution of different diets within the leaf-nosed bats was actually the major driver of changes in skull shape across this group.

"The leaf-nosed bats stand out for their extraordinary diversity in skull shape and diet," said Santana. "Over a relatively short period of time, they evolved a suite of skull adaptations as they radiated into different dietary niches."

Diet and echolocation also did not affect skull evolution uniformly. Instead, the researchers saw a "decoupling" of skull parts in terms of how the two forces shaped them. Diet was the stronger driver on the lower jaw, while echolocation had a greater effect on the cranium.

Santana's team is continuing this work as part of a larger effort funded by the National Science Foundation to compare the evolutionary forces that shape skull diversity among different groups of mammals, including bats, primates and carnivores. These studies could determine whether the patterns seen in bats — such as decoupling of skull parts or diversification of shapes as species adapt to new ecological niches — apply to other lineages, including our own.

The research was funded by the National Science Foundation, the American Museum of Natural History and the Natural Sciences and Engineering Research Council of Canada.