What is the difference between frogs and toads?

Toads are actually just a type of frog (all toads are frogs, but not all frogs are toads!). Toads have different distinctive features than what typically characterizes a frog. Often toads have drier, bumpier “warty” skin and prefer drier habitats. They usually have shorter hind limbs and rounder stouter bodies than most typical frogs. Toads have poison glands in their skin to keep predators from eating them and oftentimes produce a funny smell when handled. Sometimes there are frogs that are called toads but are technically frogs, this can be confusing… and there are frogs that have bumps on their skin and toads that have smooth skin. And there is the Horny toad which is not a frog or toad, it is actually a reptile! 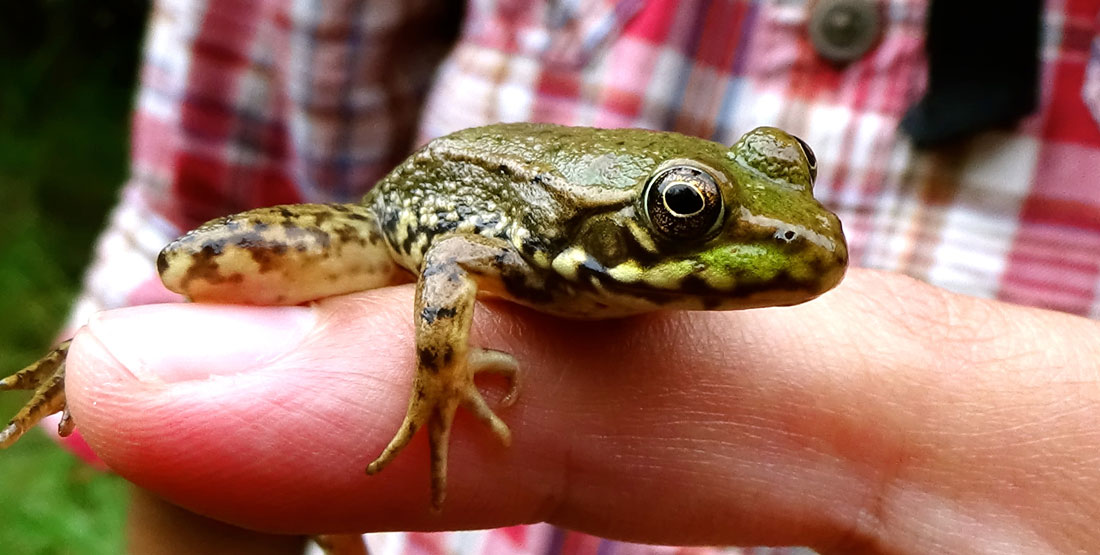 Do frogs breathe when they are hibernating?

Yes, even amphibians that hibernate in the mud underwater breathe during hibernation. Since amphibians can breathe through their skin, they can absorb oxygen in the water during hibernation. They have to hibernate in water that has a good amount of oxygen in it and sometimes will actually swim around in the water during winter to maintain proper oxygen levels. There are a few frogs that can stop their heart and breathing completely and still survive. They are able to do this by keeping a high level of glucose in their blood that acts like antifreeze and protects their vital organs. When the weather warms up, they wake up and their heart and breathing will resume normally.

Nobody really knows! At this point in time, there has been very little research in frog sleep patterns. It is known that they close their eyes, but no confirming brain scans have determined whether or not they actually have a true sleep period.

How do frogs hear?

Frogs do not have external ears like us. However, they do have eardrums and an inner ear. The frog ear is called a tympanum and is the circle you see behind a frog’s eye. Some frogs have small tympanums, while others have ones that are larger than their eyes. The size of the tympanum and the distance between them are relative to the frequency and wavelength of the species male call. Their eardrum works like a regular eardrum with one very special adaptation…it is actually connected to their lungs. The lungs vibrate and are almost as sensitive to hearing as the eardrum. This allows frogs to make really loud sounds without hurting their own eardrums! The lungs are capable of doing this by equalizing the pressure differences between the outer surface of the eardrum and the inner surface of the eardrum. This adaptation may also be important in a frogs’ ability to locate where other sounds are coming from.

Frogs do not drink like we do; they absorb water directly through their skin in an area known as the ‘drinking patch’ located on their belly and the underside of their thighs.

How do frogs swallow?

How can you tell the difference between male and female frogs?

It depends on the species. It can be really hard to tell the males from the females because the sex organs are internal for both males and females. But in many species, the female is larger than the male and the males sometimes have larger toe pads used during mating to grab onto the female. Males also call to attract females and defend their territory, so if you see a frog calling it is probably a male. The throats of many male frogs are darker than the females. In certain species, it can be easy to tell the difference. In Bullfrogs, the males are larger and have a larger tympanum (these are ears-the circles located directly behind the eyes). In many tropical frogs, the males have brighter more vibrant colors. Here in Washington State, we have the tailed frog, which is actually the only frog that has an external sex organ and only the males have these misnamed ‘tails.’

Do all frogs lay eggs in water?

Most frogs’ lay their eggs in water, but there are exceptions. Frog eggs do not have a shell, so they need some kind of moisture to keep them from drying out until they hatch. Some frogs have come up with amazing ways to keep their eggs wet besides laying them directly in water. There are frogs that lay eggs under leaves above water in damp rainforests and when they hatch the tadpoles fall into the water where they can develop into little froglets. There are some frogs that carry their eggs on their back and the male Darwin frog actually swallows the eggs and keeps them in his vocal sac until they hatch!

Why are frogs slimy?

Some frogs are slimy because they are covered in a mucous coating. This coating helps them keep their skin moist which helps them breathe through their skin. The mucous often contains other chemicals, like antibacterial or anti fungals to help protect the frog. Other frogs actually secrete a waxy coating that they spread across their body to help retain moisture in areas that have high temperatures or if they are active during the day.

What is the white stuff on frogs/salamander skin?

The white stuff is secreted toxins. Some salamanders and frogs or toads secrete noxious chemicals as deterrents to predators. These secretions can be relatively mild to highly toxic. If you see white stuff on an amphibian skin, do not touch it! The amphibian is feeling very threatened if it starts oozing stuff and some can even ‘squirt’ it out at predators eyes, so keep your eyes protected and leave the amphibian alone.

Can a frog drown?

Why do frogs eat their own skin?

To not waste all the nutritious protein found in their skin. Frogs shed their skin periodically like most animals, but they do not slough it off and leave it behind. Frogs actually push the shedding skin into their mouth and eat it. This is the ultimate way to recycle all the components they used to produce their skin.

Why do frogs have such big eyes? Why do frog’s eyes stick out of their head?

So they can see behind them and to the sides without having to turn their head around. The large eyes are set far apart from each other and protrude out of their heads to give them an almost 360 degree view of their surroundings. This helps them see potential predators and prey to either make a quick escape or catch their dinner.

Can frogs see underwater? Yes, frogs have a third eye lid that covers their eyes so they can keep them open underwater. The eyelid is called the nictitating membrane and also helps the eyes to stay moist when they are not in the water.

What are the bulges on a toad’s head?

They are poison glands. They are called parotid glands and are found behind the eyes on toads and some frogs and salamanders. In toads, these glands contain bufotoxin, which is a neurotoxin. When a toad is under duress it will secrete the milky bufotoxin from these glands and sometimes even shoot it out to try and get it in the predator’s eyes or mouth. If an animal attempts to eat them they will get very ill and sometimes die, depending on the severity of the amount ingested and the strength of the neurotoxin.