Myth: Those large, hairy spiders I find in my house are wolf spiders.

Fact: Many people have heard the term "wolf spider" but very few know what it really means. There is a natural tendency to equate "wolf" with "big and hairy." However, true wolf spiders (species of the family Lycosidae) are placed in that family by the arrangement of their eyes, and not by general appearance.

Most wolf spider species are relatively small, their bodies around 1 centimeter long or less. What's more, in North America no member of the wolf spider family is part of the house spider fauna. Evidently their type of prey capture (active pursuit) works better outdoors.

Some very common wolf spiders occasionally wander indoors in some parts of the USA (Schizocosa in the southwest, Tigrosa helluo in the northeast) but don't survive there. However, large, conspicuously hairy, active spiders found indoors are most often males of the European House Spider group (genus Tegenaria, now sometimes called Eratigena). Incidentally, North American wolf spiders are not dangerous to humans. 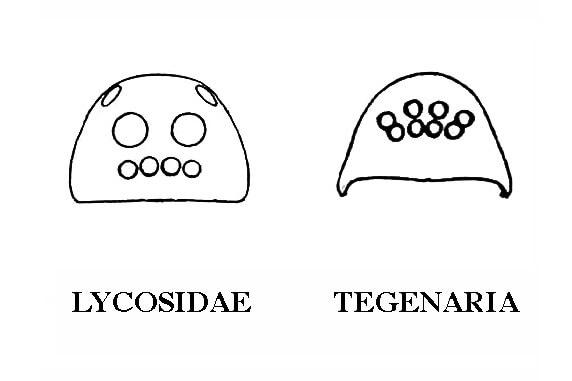 Eye arrangement diagrams for a wolf spider and a Tegenaria house spider (from front).