In the Field Plants & Fungi

As in the Pacific Northwest, northern South America is a geologically dynamic region whose biota has been shaped by mountain building. The Andes are the longest continental range in the world extending the length of South America, and include high peaks that create an altitudinal gradient. It has been suggested that the Andean uplift triggered the fastest radiation of plant species in the world. 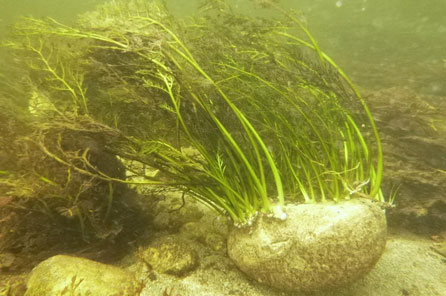 A river-weed in the genus Marathrum found in the Don Diego river. These plants attach to rocks 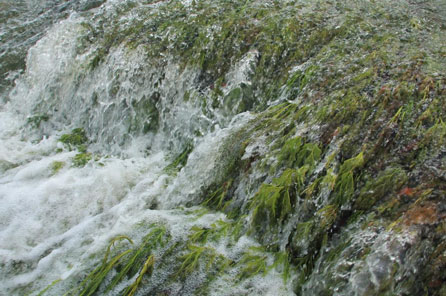 This past summer I ventured to Colombia, the northernmost country in South America. Colombia is famous among naturalists for holding the greatest number of birds in the world and for representing a mosaic of ecosystems as a result of the Andes splitting into three ranges in the region. My objective there was to collect river plants in the Podostemaceae family. 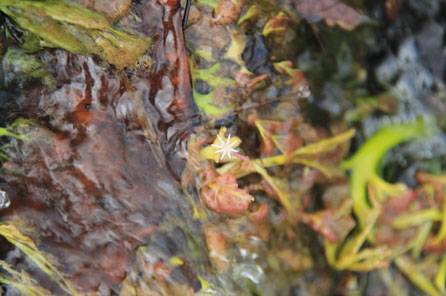 River-weeds resemble algae but have flowers! These flowers have neither sepals nor petals. 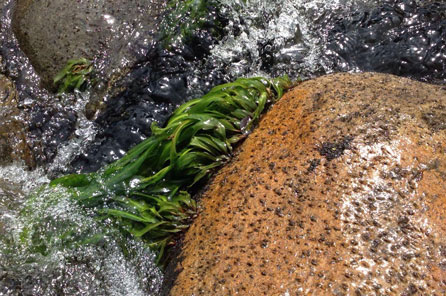 Also known as river-weeds, the Podostemaceae resemble algae but are flowering plants, producing small flowers that stick above the water level. Their highly simplified forms are adapted strictly to fast-flowing aquatic habitats such as rapids, rivers and streams. Their form, with roots forming a holdfast and flexible stems, makes them look a lot like algae attached to rocks.

The group has been poorly collected in the region with most of the records dating from 1951 or earlier, and few in recent years. The limited sampling effort is partly due to the difficulty of travelling to the places where the plants occur—long and logistically complicated journeys by air, land, and water. Also, there’s the apparent unattractiveness of river-weeds to most researchers who go to the tropics in search of flamboyant plants.

While in Colombia, I first visited the Caribbean coast where Dr. Santiago Madriñán hosted me at the Guillermo Piñeres Botanical Garden in Turbaco, Bolívar. Santiago is a well-known Colombian botanist at the Universidad de los Andes and current director at the botanical garden in Turbaco, most famous for his work on plants in the tropical alpine ecosystem known as páramo. At the garden, the herbarium holds the most important plant collection in the Colombian Caribbean. 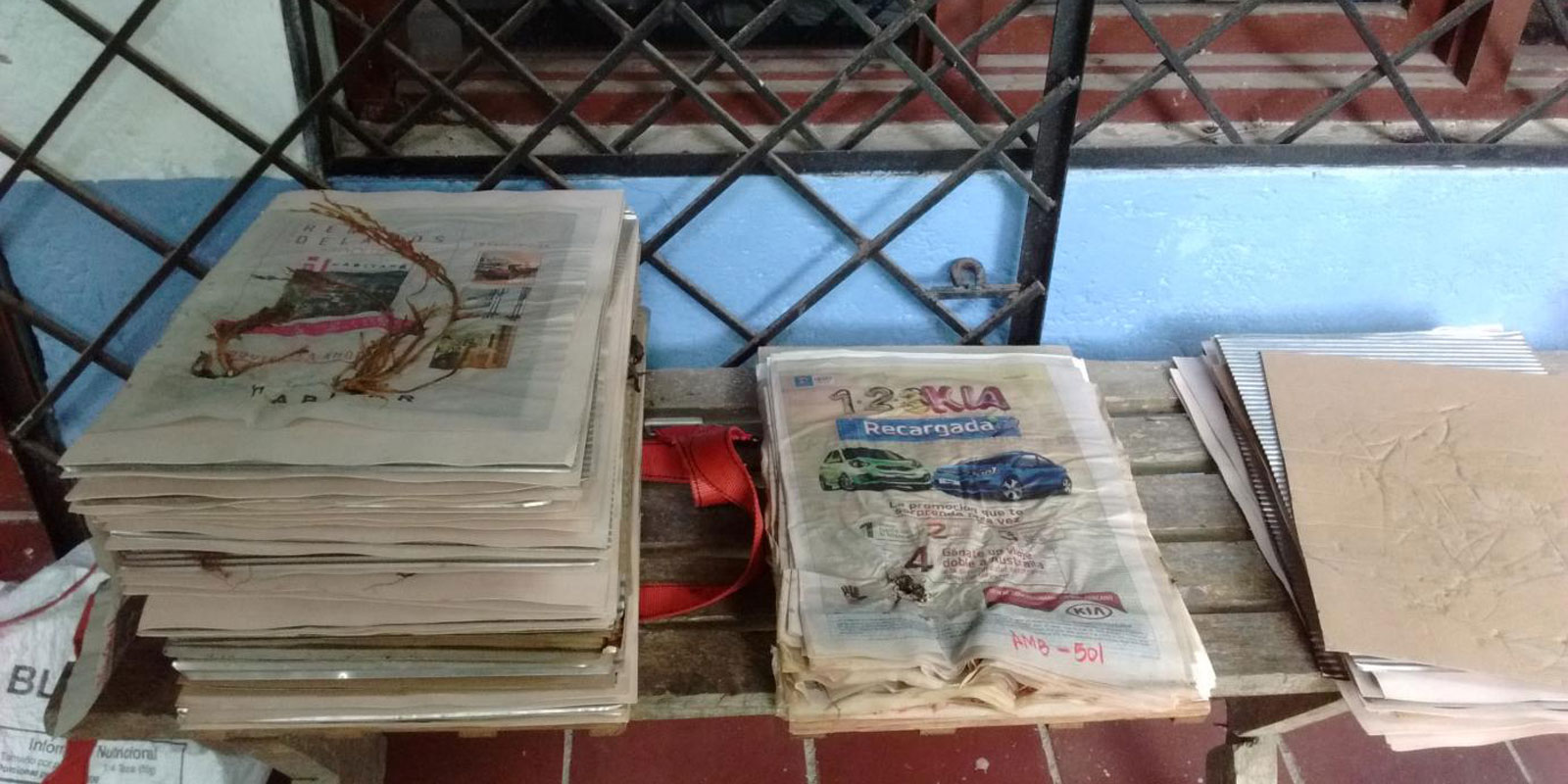 After collecting plants, they are pressed and dried in an oven at 158ºF before they are deposited in the Plants & Fungi.

Shortly after we started our journey, my field assistant and I found ourselves in the Don Diego river collecting a species of Podostemaceae in the genus Marathrum. These plants had never been collected in this river, but locals have known about their existence for a long time and have even eaten them occasionally. We then headed east and visited the San Salvador, Ancho, Jerez, Palomino, Piedras, and Buritaca rivers. These rivers originate in a high snow-capped mountain and we found species of river-weeds in each of them. 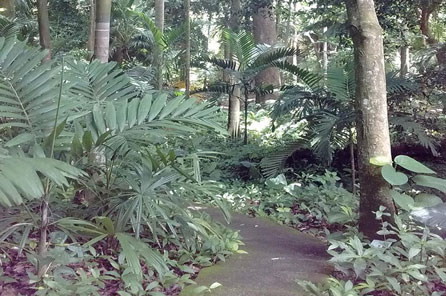 The botanical garden in Turbaco, Colombia holds the most important plant collection in the Colombian Caribbean. 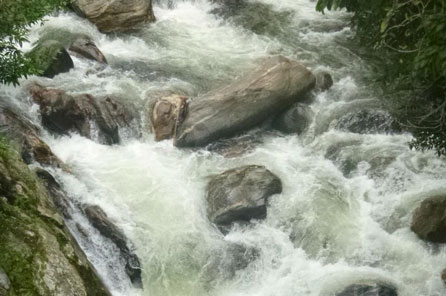 We crossed the Buritaca river three times on our way up the Sierra Nevada of Santa Marta.

Our journey along the Buritaca river consisted of a four day walk up a 3937 feet tall mountain passing by the Kogi, Arhuaco, Wiwa, and Kankuamo indigenous communities. 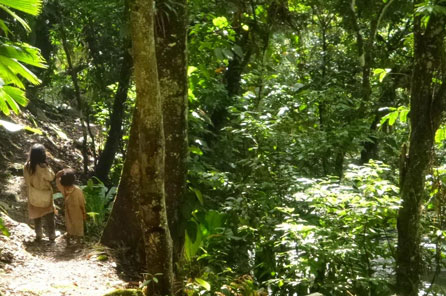 Kogi children - this tribe is the most traditional in the region. 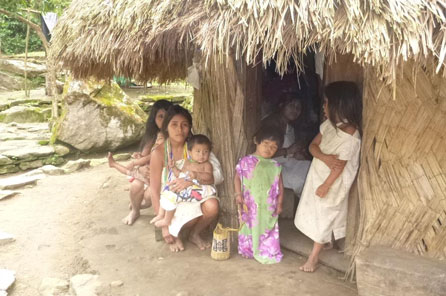 Family of the political shaman of the Kogi people.

Subsequently, I was joined by two other field assistants and biologists and two local residents for a trip to Carurú: a very small and isolated town by the Vaupés river in the Amazon basin of Colombia. As with many localities in the Amazon, land access is restricted and getting there involves river and air travel. We embarked on a fascinating and adventurous journey aiming to collect the same species that Richard Evans Schultes, the father of modern ethnobotany, found in 1951.

Traveling along rivers and streams in the Amazon was a sublime experience as the Durango brothers “Moño” and “Tori” led our way. They are locals with incredible knowledge of the forest; they navigated the boat along the streams as a Seattle local would navigate neighborhood streets without a map, knowing exactly which shortcuts to take and what obstacles to avoid. 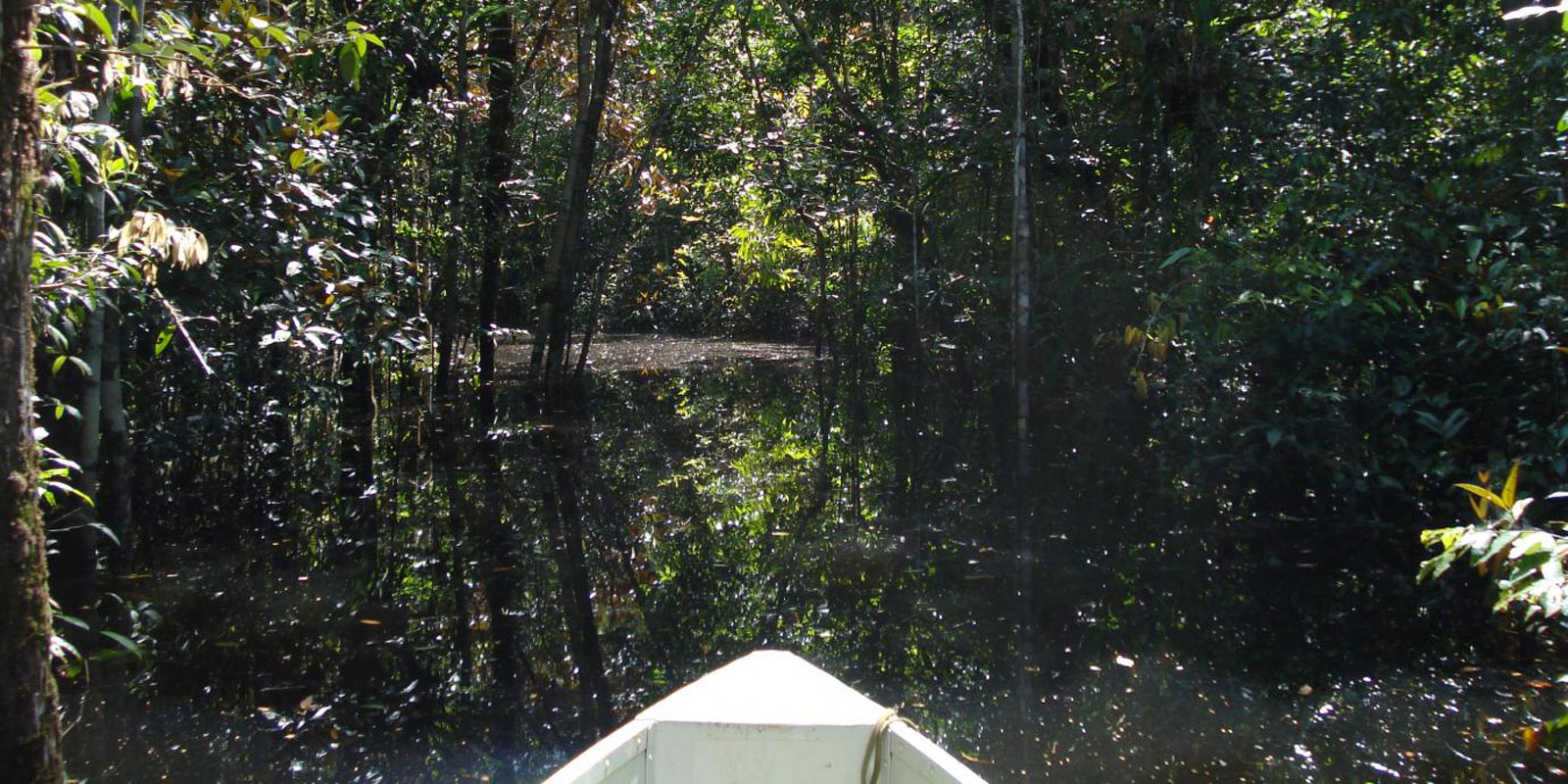 Making our way through the Carurú stream in the Amazon. The view, smells and sounds are fantastic!

In the Amazon, the Yuruparí and Carurú rapids were some of the localities where we collected plants. These rapids are nutrient-poor (black-water rivers) and their splendor contrasts with that of granitic rock outcrops and riparian vegetation. The local people visit the rapids constantly for fishing even in the most extreme and risky conditions. 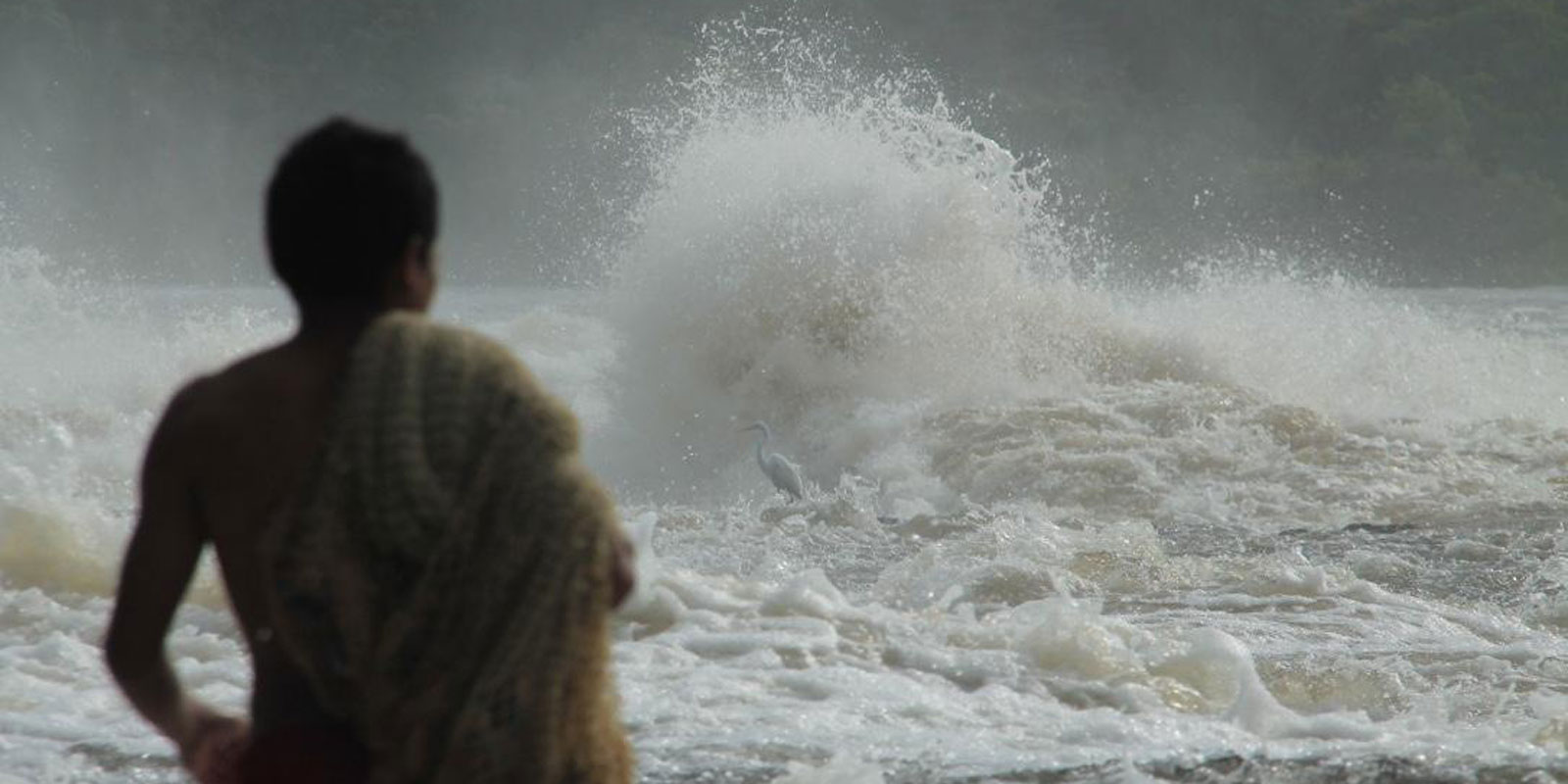 Fisherman inside the stream. They are able to walk and stand still while fishing in such conditions. 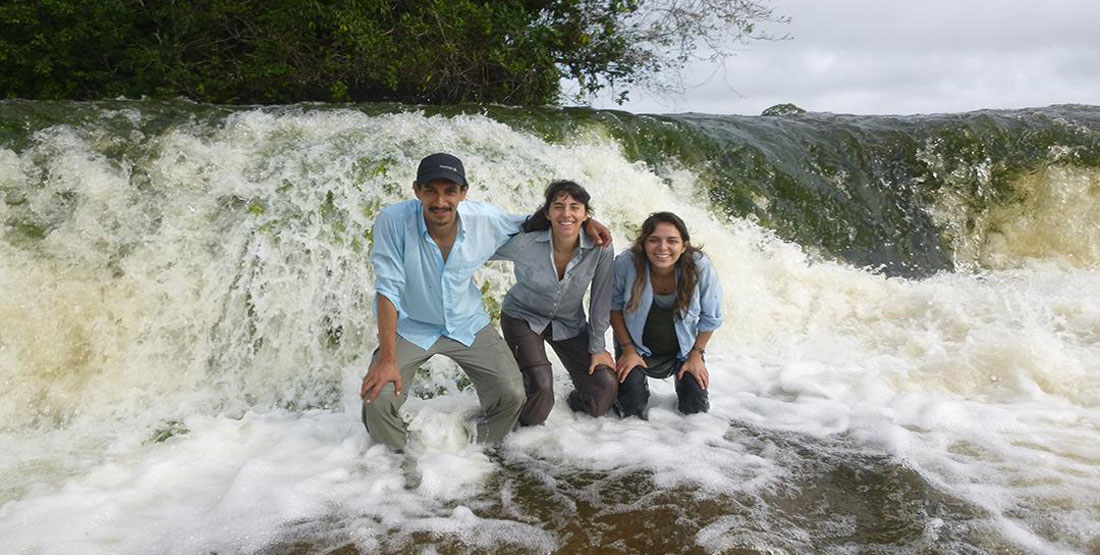 My field assistants Nicolás, Juliana, and I enjoying ourselves in the Yuruparí rapids. 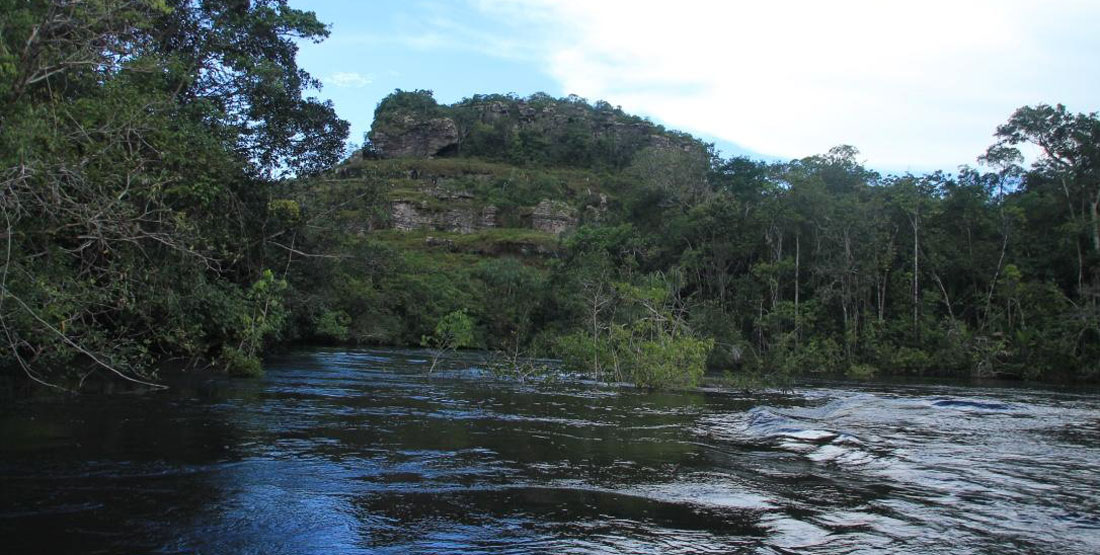 Granitic outcrop on the margin of the Vaupés river. The formation holds a great diversity of plants adapted to flooded savannas.

Many of the species that I collected during my trip to Colombia are new records for the country, expanding our current knowledge of plant richness in northern South America. Currently, I am analyzing DNA samples from leaf tissues of river-weeds and water primroses (Ludwigia) obtained in the field. I will also be working with an expert taxonomist in the family Podostemaceae to verify the identity of my samples. The material will be used to estimate when the water primroses and river-weeds diversified in northern South America, and the impact of Andean uplift in such events.

Since the Andes transformed northern South America from a region dominated by a huge wetland to river systems isolated from one another, we expect that most species of river-weeds had originated after the uplift event. So far, the experiences in the field, herbarium, and laboratory have been very enriching. The results of this project will hopefully take us closer to understanding sources of diversity in the tropics and the impact of landscape change in plant evolution. Stay tuned!

Ana Maria Bedoya is a PhD candidate in the Olmstead Lab at the University of Washington. 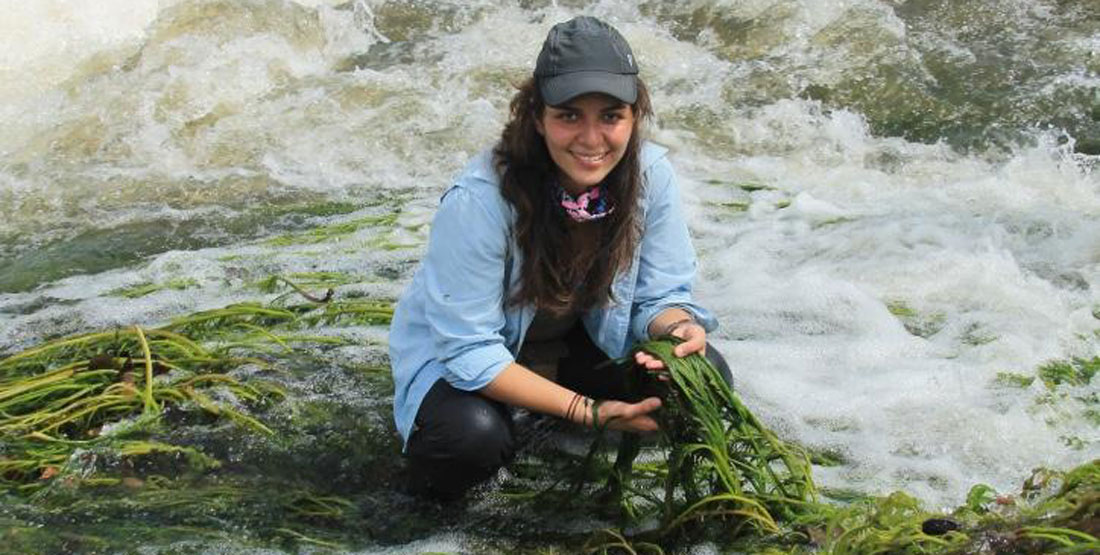 Aquatic plants are understudied in Colombia but I love getting my feet wet!